Patients who achieved long-term, sustained weight loss experienced a significant reduction in the burden of atrial fibrillation (AFib) and maintained sinus rhythm, according to results from the LEGACY Trial published in the Journal of the American College of Cardiology and presented on Monday, March 16 as part of ACC.15. These patients also saw favorable changes in cardiometabolic risk, inflammatory state and cardiac remodeling. 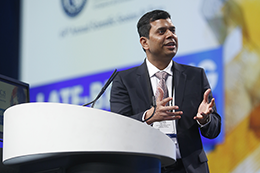 Weight loss has been known to reduce AFib burden; however, whether this result is sustained, has a dose effect or is influenced by weight fluctuation was not known. In this ongoing study, author Rajeev K. Pathak, MBBS, and colleagues looked at 355 patients younger than 65 years of age with a BMI of ≥ kg/m2 who were referred to the study center for management of symptomatic paroxysmal or persistent AFib, without a history of myocardial infarction or cardiac surgery in the previous 12 months. Also excluded were patients with significant cardiac valvulopathy, ventricular dysfunction, active malignancy, autoimmune or systemic inflammatory diseases, severe renal or hepatic failure, and less than 24 months of follow up. All patients received face-to-face weight loss counseling with optional participation in a dedicated, physician-led weight management clinic or self-managed weight-loss program. To determine a dose response, patients were divided into three groups: those who lost more than 10 percent of their starting body weight (Group 1); those who lost 3-9 percent (Group 2); and those who lost less than 3 percent (Group 3). Weight trend and fluctuation was determined by annual follow-up. Researchers determined the impact on AFib severity scale and 7-day ambulatory monitoring.

At follow up, there were no differences in baseline characteristics or follow-up duration between the groups (p=NS). The AFib burden and symptom severity decreased more in Group-1 compared to Group-2 and 3 (p<0.001 for all). Arrhythmia-free survival both with and without rhythm control strategies (medication or ablation) was greatest in Group-1 compared to Group-2 and 3 (P<0.001 for both). In multivariate analyses, weight-loss Group (p<0.001) and weight-fluctuation (p<0.001) were independent predictors of outcomes. Weight-loss less than 10 percent resulted in a six-fold (95 percent CI: 3.4-10.3, p<0.001) greater probability of arrhythmia-free survival compared to other two groups. Greater than 5 percent weight- fluctuation partially offsets this benefit with a two-fold (95 percent CI 1.0-4.3; p =0.02) increased risk of arrhythmia recurrence.

“It is pertinent to note that weight fluctuation was significantly less in patients regularly attending a dedicated weight management clinic. Patient engagement and collaborative involvement improves treatment plan adherence and persistence and may be ‘the forgotten piece’ in the compliance puzzle,” he added.