The prevalence of heart failure (HF) continues to increase, and with an estimated 825,000 new cases annually in the U.S., the burden will continue to rise, expected to exceed eight million by 2030.1 Mortality in patients with HF is considerable, with over 50% dying within five years of diagnosis.1 The mortality rate has improved slightly in the last few years but continues to be excessive. With over one million hospital discharges annually and costs exceeding $30 billion per year, improved ways to evaluate, prognosticate, and potentially determine effectiveness of therapies is necessary to improve the burden of HF.1

Systolic HF is a progressive disease manifesting in a complex of decreased cardiac output, decreased organ perfusion, volume overload and neurohormonal imbalance. In addition, there are a variety of changes that occur at a cellular and molecular level that affect myocardial function, remodeling, and progression of disease. Part of the challenge of treating HF patients is determining which patients will deteriorate, which are at risk of arrhythmias, and who will respond to particular therapies. Radionuclide imaging has traditionally been used to evaluate the etiology of HF, whether ischemic or non-ischemic and to determine the extent and severity of ischemia. The field of radionuclide imaging is broadening, and in addition to anatomical imaging, radionuclide imaging also has the unique ability to image the myocardium at a molecular level. This molecular imaging is designed to image the spectrum of cardiovascular disease including inflammation, thrombosis, apoptosis, necrosis, and fibrosis.2 Additionally, radionuclide imaging can assess the sympathetic innervation of the myocardium. In HF, the autonomic nervous system is disrupted, initially with upregulation of the sympathetic nervous system to compensate for a failing heart and, over time, downregulation of cardiac receptors. Currently, cardiac sympathetic innervation can be imaged with the norepinephrine (NE) analogue, iodine-123-meta-iodobenzylguanidine (123I-mIBG). Sympathetic innervation imaging can provide insights into the prognosis of patients with HF and, in the future, may evolve into a prognostic tool to help risk stratify patients who will benefit from particular interventions including device therapy.

The autonomic nervous system plays in an important role in regulating cardiac function and consists of circulating hormones, such as NE, and direct neural control by sympathetic and parasympathetic cardiac innervation. It is now possible to image sympathetic cardiac innervation with a radiolabeled NE analogue. As illustrated in Figure 1, NE is synthesized in presynaptic adrenergic terminals and stored in vesicles that, in response to sympathetic stimuli, are released into synaptic spaces and interact with postsynaptic α, β1 and β2-receptors on the myocyte membrane resulting in heart rate, contractility and conduction effects.3 To control and terminate these effects, there is active NE reuptake into presynaptic terminals, mostly via the norepinephrine transporter-1 (NET1) membrane protein, for storage or catabolic metabolism.4 Iodine-123-meta-iodobenzylguanidine (123I-mIBG) is a radiolabeled analogue of the false NE transmitter guanethidine that, when injected intravenously, diffuses into synaptic spaces and is taken up into presynaptic terminals by the NET1 transporter but not metabolized, thereby accumulating and allowing imaging for assessment of the functional state of adrenergic innervation.5 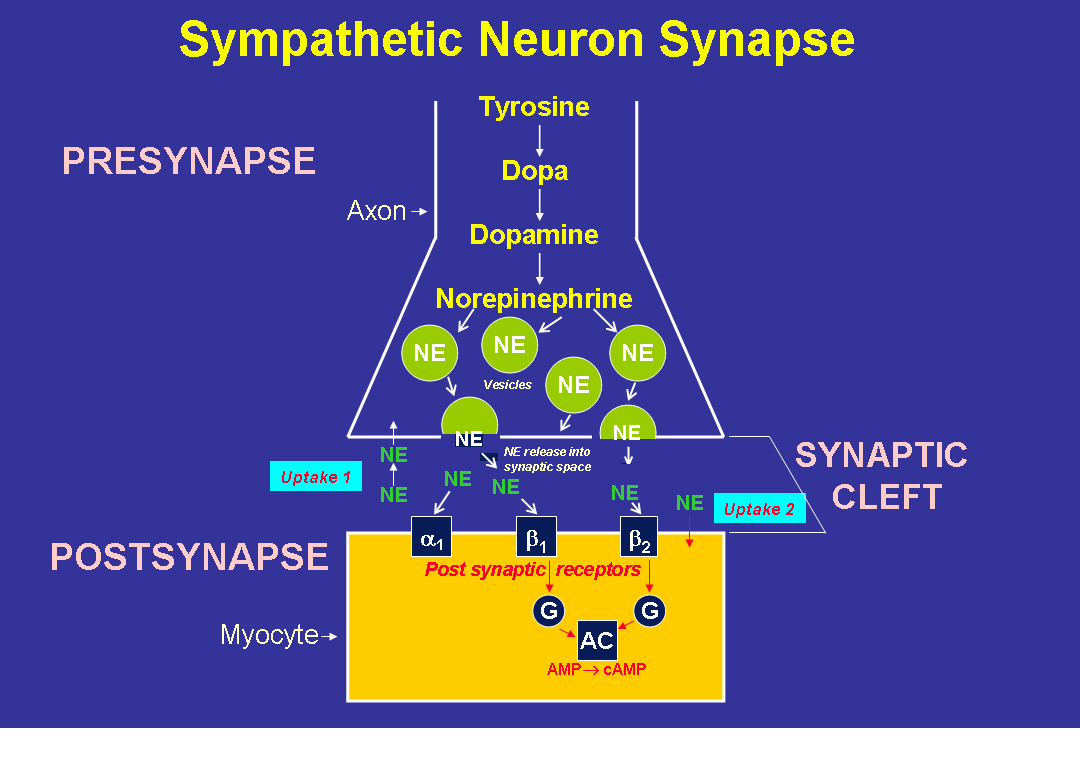 Cardiac 123I-mIBG imaging involves a rest injection of 10 mCi (patient exposure is ~ 5 mSv), followed by early and ~4-hour delayed anterior planar images, and often tomographic images as well. 123I-mIBG imaging is frequently accompanied by rest perfusion imaging at another time to relate regional adrenergic function to perfusion. Imaging is by a conventional gamma camera focused on the principal 159 keV 123I-emission using a low energy collimator, although there are reports suggesting that use of a medium energy collimator to block corrupting higher energy emissions may be better.6 There is early data of imaging with solid state cameras, although different quantitative parameters result.7

Currently the most important parameter assessed is global cardiac uptake in reference to background, i.e., the heart-to-mediastinum ratio (HMR). Based on reports of control subjects, a normal HMR is 2.2 ± 0.3, from which an HMR more than 2 standard deviations below (i.e., <1.6) has been used as a threshold for increased risk of adverse events,8 although there is a continuous gradient of increased risk as the HMR decreases below normal.9 While there are reports of 123I-mIBG imaging being useful in a variety of cardiac pathologies including myocardial ischemia,10 primary arrhythmic conditions (e.g., Brugada syndrome11 and arrhythmogenic right ventricular dysplasia12), post-cardiac transplant,13 assessing myocardial damage from diabetes mellitus,14 and determining cardiac effects of cancer chemotherapy,15 the current focus is on HF and associated arrhythmias. Potential use of 123I-mIBG for risk stratifying patients with HF was demonstrated in a key study by Merlet et al. showing HMR to be more powerful and independent of cardiac size, echocardiographic end-diastolic diameter and left ventricular ejection fraction (LVEF) in predicting survival.16 Over about two decades, single-center studies demonstrated the robustness of the HMR for risk stratifying patients with HF, leading to the prospective multicenter international AdreView Myocardial Imaging for Risk Evaluation in Heart Failure (ADMIRE-HF) study of 961 patients with New York Heart Association (NYHA) Class II-III HF and LVEF ≤35%, in which an HMR <1.6 more than doubled the occurrence of worsening NYHA class, life-threatening arrhythmias, and cardiac death, with a hazard ratio (for a higher HMR), of 0.40 (p <0.001).17 Key results of this study are shown in Figure 2. Multivariate analysis showed that HMR predicts cardiac and all-cause deaths independent of other variables, including age, NYHA class, LVEF, and brain natriuretic peptide (BNP). A substudy showed that HMR added to the Seattle Heart Failure model for predicting survival, with a net reclassification improvement of 22.7%.18 A study of 1,322 patients from six Japanese centers re-analyzing previous prospectively collected data found similar results to ADMIRE-HF.19 Figure 3 shows examples of 123I-mIBG images in patients with HF.

Examples of planar 123I-mIBG images in patients with HF with HMRs and patient outcomes described.

Nevertheless, risk stratification is insufficient for demonstrating clinical utility, with the need to show utility in guiding therapy. HMR can help monitor the clinical course of patients on standard HF medications,20-23 but as HMR is unlikely to significantly influence the use of such medications, an area of investigation has been potential use of 123I-mIBG to guide invasive, expensive therapies. As a deteriorating HMR while on comprehensive medical therapy indicates a poor prognosis,24 some have suggested that 123I-mIBG imaging could help select patients needing interventions such as cardiac resynchronization therapy,25 a left ventricular assist device (LVAD), or cardiac transplantation.26,27 A few small studies have shown that 123I-mIBG imaging may help select LVAD patients who are improving sufficiently to defer potential transplant and perhaps explant the device.28,29

A major focus has been on the ability of 123I-mIBG imaging to risk stratify patient for risk of ventricular arrhythmic sudden cardiac death (SCD), and thereby guide the use of an implantable cardioverter defibrillator (ICD).30 While guidelines recommend LVEF (≤35%) as a key criterion for implanting an ICD,31 there are limitations to this approach.32,33 As many patients with an ICD do not use it, and as the device is costly and has potentially serious complications,34 clinicians are often not following guidelines35 indicating that a better approach is desirable.36 As cardiac autonomic innervation is more closely related to underlying mechanisms of arrhythmias than LVEF,37 123I-mIBG imaging should better determine the need for an ICD. Studies report that 123I-mIBG parameters, including HMR,38,39 washout,40 and regional single-photon emission computed tomography (SPECT) defects41 identify patients at higher risk of lethal arrhythmias. ADMIRE-HF found that patients with HMR ≥1.6 had an extremely low risk of lethal arrhythmic events over a two-year follow-up.17 The ability of tomographic imaging to identify regional defects may make it more specific than planar HMR for identifying arrhythmic risk.27,42 Supporting this concept is a recent study using the similar adrenergic PET tracer 11C-hydroxyephedrine (11C-HED) in 200 patients with ischemic cardiomyopathy, showing that four-year occurrence of lethal/potentially lethal arrhythmic events increased in relation to the severity/extent of 11C-HED tomographic abnormalities independent of BNP, symptoms, or LVEF.43

Nevertheless, it is the consensus in the cardiology community that well designed prospective studies must be undertaken before 123I-mIBG imaging can supplant established ICD guidelines. In lieu of such studies, among indications that could conceivably be supported at the present time (although there are no specific data) are 1) patients with HF with LVEF≤35%, NYHA Class II, III who meet established American College of Cardiology (ACC)/American Heart Association (AHA) Class I indication for ICD placement and have not received ICD due to uncertainty on the part of the treating physician or the patient; 2) patients who originally received an ICD for primary or secondary prevention of SCD, who subsequently underwent complete device and lead removal due to definite infection, and there is uncertainty on the part of treating physician to proceed with ICD replacement; and 3) patients with HF who originally received an ICD for primary prevention of SCD when LVEF was <35%, have had no clinically relevant ventricular arrhythmias since implant, have had improvement of the LVEF, and require generator replacement. Development of registries has also been suggested as way of assessing practical clinical utility, but at the moment, product pricing in relation to third party reimbursement presents a major challenge.

YOU ARE HERE: Home > Latest in Cardiology > Radionuclide Molecular Imaging in Heart Failure