The analysis, published in the Journal of the American Heart Association, is based on performance measure data captured as part of PIQIP for 68,196 unique patients from 10 Indian cardiology outpatient departments from Jan. 1, 2011 to Feb. 5, 2014. Study authors estimated the prevalence of cardiovascular disease risk factors like hypertension, diabetes, dyslipidemia and current tobacco use, as well as examined adherence to performance measures for coronary artery disease, heart failure and atrial fibrillation (AFib).

Study authors highlighted several important findings, including a seemingly significant difference by sex among cardiovascular disease encounters, with women composing only 7 percent and 3 percent of patients with coronary artery disease and heart failure, respectively. They also noted a younger mean age of the represented populations with cardiovascular disease and relatively lower prescription of evidence-based medications.

Despite the success, the study authors did note several challenges to PIQIP. Namely a lack of electronic health records; virtually non-existent outpatient record-keeping; the need for repeated training of staff regarding scanning software; and difficulty engaging physicians in using the web-based tracking tool due to their busy clinical schedules.  Moving forward the authors said several strategies are being considered, including enhanced data capture to include socioeconomic variables, medication contraindications and laboratory values; expansion of the program to more sites across India; and “progression to a model that enables [outpatient departments] to become self-sufficient in data collection and reporting and, consequently, less dependent on ACC staff.”

In a country with a disproportionate provider/patient ratio and low levels of government funding for quality improvement, physician-driven initiatives for practice-based learning and improvement could be considered an unrealistic expectation,” the study authors said. “PIQIP demonstrates the feasibility of data acquisition in this challenging environment.”

Read more about the PIQIP project on the ACC in Touch Blog. 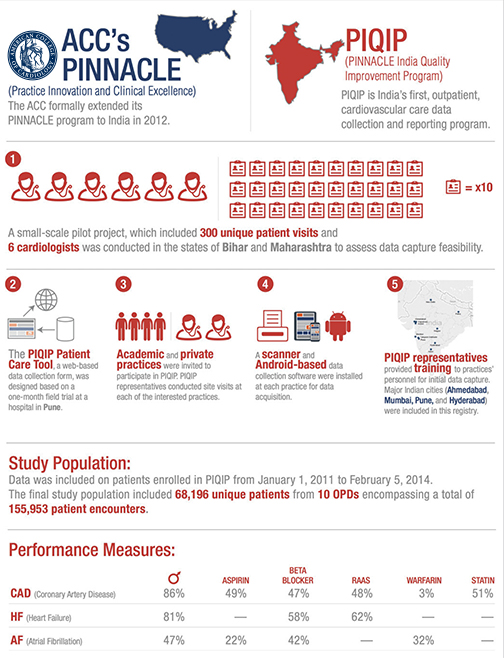