Blood Pressure Measurement: Is It Time to Leave the Korotkoff Method Behind?

Since 1896 when Riva-Rocci1 and subsequently Korotkoff2 developed the cuff sphygmomanometer, arterial blood pressure (BP) has been the most prominent and most frequently measured parameter in medical practice. Moreover, BP has been incorporated in the major cardiovascular disease risk scores. The diagnosis and treatment of arterial hypertension are based on systolic and diastolic BP. These values are only the extreme points of the arterial BP waveform. Although noninvasive registration of the continuous radial artery pressure waveforms was developed even earlier by Vierordt3 in 1855 and adapted by Marey in 1860,4 it was not widely implemented in the assessment of BP measurement.

The target for antihypertensive therapy, whether by altering lifestyle or by pharmacotherapy, is also the measured BP, and recent controversy has surfaced regarding the optimal BP goal of therapy.5 Recognition that the thresholds for the diagnosis of hypertension may not identify all those with a disorder likely to eventuate in morbid events has led to the diagnostic category of pre-hypertension in individuals with high-normal BP.6 This diagnostic category has troubled some because it may label many normal individuals as having a disease.

During the last decade, a more attractive strategy for defining a hypertensive population is to identify the phenotype or pathophysiologic characteristic of so-called essential hypertension.7 The elevation of BP that characterizes hypertension is mediated by functional and/or structural changes in the arteries that determine arterial resistance and stiffness and that place a burden on the left ventricle (Figure 1). The complications that accompany hypertension stem from progression of these vascular and cardiac changes that precipitate morbid events. These vascular abnormalities likely precede the rise in BP to hypertensive levels, and the BP rise also accelerates these vascular abnormalities. By quantifying and monitoring the health of the vasculature, it should be possible to separate patients with cardiovascular abnormalities likely to progress to morbid events from those without such abnormalities and, therefore, unlikely to sustain such events.8 The former are in need of treatment and could be classified as "hypertensive," and the latter could appropriately be classified as normal or "normotensive." Blood pressure will generally be higher in the former group than the latter group, but the overlap is likely to be considerable. Treatment then could focus on reversing or slowing progression of the cardiovascular abnormalities using target doses of drugs rather than merely lowering BP to an arbitrary threshold. Identifying the vascular phenotype of the subjects who will develop arterial hypertension may be helpful to follow these subjects more intensively and potentially start medical therapy beyond lifestyle changes to halt the progression to hypertension following the classical definition.9,10 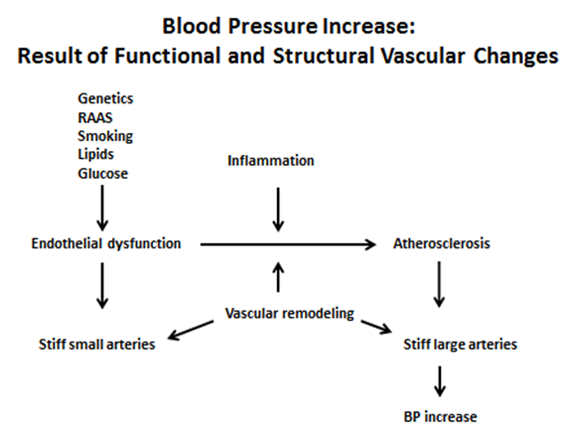 Nearly one century after the discovery of the sphygmomanometer by Riva-Rocci and Korotkoff, the concept of the approach of BP measurement has been reconsidered. It is more interesting for the patient to halt the progression of arterial stiffening and, consequently, the rise in arterial BP. The most common techniques to assess arterial stiffness are either based on the study of pulse wave velocity (PWV) or the pulse contour analysis of the radial artery pulse waveform (Figure 2).11 The principle is based on the difference in the arrival time of the arterial waveform at two different points along the arterial tree. The most frequent measurement is the carotid-femoral PWV. The other technique is based either on the analysis of the systolic or the diastolic part of the radial artery waveform obtained noninvasively by tonometry. 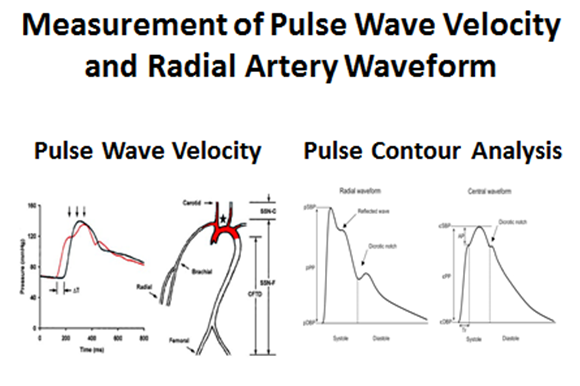 It has been well documented that carotid-femoral pulse velocity and analysis of the systolic and/or diastolic part of the radial artery pulse waveform provide prognostic information above and beyond the classical arterial BP and the classical risk factors for cardiovascular disease events.12-14

There is some evidence that central aortic BP may predict cardiovascular disease better than brachial blood pressure.13 Certain antihypertensive drugs may affect central aortic BP more than peripheral BP. There are noninvasive methods to obtain arterial waveforms using applanation tonometry with two main approaches: 1) the carotid waveform is used as a surrogate for that of the aorta, calibrating the waveform to brachial diastolic and mean BP; 2) a generalized transfer function (a mathematical description of the change from the input to output signals of a system) to derive an aortic waveform from measurements made at the radial artery. Other methods have been developed for estimating central aortic BP based on brachial pulse wave with a regular brachial oscillometric BP cuff. Several methodological issues remain to be addressed before central BP measurement will be integrated into clinical decision making and practical benefit of patients. Reference values of central BP have been established.15,16 Cut-off values of central BP need to be established for the diagnosis of hypertension because there is an overlap of central BP value with normotension and hypertension.17 A full synthesis of the available evidence concerning central BP and the risk of cardiovascular events is required, and some data of meta-analysis seem promising;13 more data are expected in the future. While the Kortokoff method of BP is based on the two extreme points of the arterial pressure waveform, the central BP focuses on one single point of this waveform either obtained at the radial artery or the carotid artery, and further studies are necessary to determine the definitive value in medical practice.

In order to prevent the development of high BP, which is still one of the most important silent killers, there is a need to obtain more information of the arterial BP waveform than only the two extreme points, systolic and diastolic BP, or even one point the central aortic BP. This change will contribute importantly to a more personalized approach in the maintenance of cardiovascular health.

YOU ARE HERE: Home > Latest in Cardiology > Blood Pressure Measurement: Is It Time to Leave the Korotkoff Method Behind?