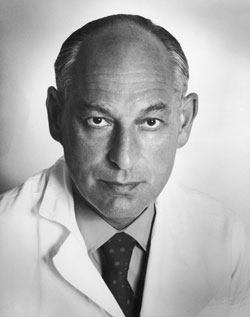 ACC Past President Borys Surawicz, MD, MACC, a pioneer in electrocardiography and a significant contributor to the cardiovascular academic community, has passed away.

Originally a native of Moscow, Russia, Surawicz trained in Europe from 1939 – 1949 before serving as a medical officer of public health in Holmestrand, Norway (1949 – 1950). One year later, he was named chief of medicine for the Bogenhausen Hospital in Munich, Germany.

Surawicz began his training in the U.S. with an internship at the DeGoesbriand Memorial Hospital in Burlington, VT, followed by two fellowships at the Philadelphia General Hospital in Philadelphia, PA, before gaining his U.S. citizenship in 1956.

Surawicz became a member of the College in 1964. Prior to serving as ACC president from 1979 – 1980, Surawicz garnered many accolades for his success as a professor. He was honored with the Master Teacher Award by the ACC in 1971 and 1974, and served as an instructor of medicine at multiple institutions, including the University of Kentucky, where he was named professor emeritus (1981). He was also named professor emeritus at the Indiana University School of Medicine in 1987, and he served in this role until his retirement in 2006.

Surawicz was a true innovator, and his passion for academia shone throughout his involvement in the ACC. In 1978, when the Federated Council for Internal Medicine urged the modification and limitation of subspecialty training slots, Surawicz fought for recognition of the importance of subspecialties, saying, “The public can best be served under an educational system which maximizes the freedom of individuals to choose and develop their career interests and opportunities…This applies to both the selection of medicine as a career and the choice in specialty.”

Surawicz dedicated an admirable amount of time, effort and energy into the ACC, serving as vice president from 1977 – 1978 and president-elect from 1978 – 1979, in addition to his time as ACC president.

His devotion to his colleagues, his students and his field has been tremendous, and as a result, he has been honored in many capacities. He was celebrated as a National Association for Sport and Physical Education Distinguished Scientist in 1992, he was given the Cardiac Electrophysiology Society Recognition Award in 2006, and he has received honorary membership into several international medical organizations.

“Borys' career was never ending.  After completing his time as Department Chair at University of Kentucky and his presidency of ACC, he smoothly transitioned to the next phase of his career, bringing academics with a small ‘a’ to a busy, large private practice.  Thus, demonstrating that research, teaching, innovation and professional leadership can flourish anywhere there is the right culture, the right people, and a thirst for intellectual curiosity,” said Edward Fry, MD, FACC, immediate past governor of the ACC Indiana Chapter and a colleague of Surawicz. “His personal story of survival, persistence, humility, thoughtfulness and compassion complemented his intelligence, wisdom and scientific contributions, which, taken together, shaped the personal and professional lives of several generations of students and colleagues alike throughout the world of cardiovascular medicine.”

The great impact left by Surawicz’s dedication to the ACC and the field of cardiovascular medicine is sincerely appreciated by all who are touched by his work.

YOU ARE HERE: Home > Latest in Cardiology > In Memoriam: ACC Past President Borys Surawicz, MD, MACC