Even with careful study design, observational epidemiology is prone to confounding, bias, and reverse causation.1-3 As a consequence, observational studies have generated unreliable estimates of causality in associations between risk factors and disease. A successful approach to overcome limitations inherent in observational studies and improve causal inference is Mendelian randomization (MR).4,5

As MR has been applied many times, the principle, motivation and key assumptions have been explained in detail previously3,6-14 and application to cardiovascular disease reviewed.4,15,16 Briefly, MR exploits the essentially random allocation of alleles at conception as the basis of a natural experiment analogous to a randomized controlled trial (RCT) whereby a genetic variant is used as a proxy for a clinically relevant risk factor for disease (Figure 1).3,17 At a population level, the genotype is largely independent of confounding factors and unmodified by the development of disease.3,18 Therefore, the portion of variance in the modifiable risk factor explained by the genetic variant, unlike the direct measurement of the risk factor, is free of the limitations that would otherwise plague observational studies. Evidence for a causal association between a risk factor and an outcome is provided if the genetic variant, reliably associated with the risk factor, is independent of all measured or unmeasured confounding factors and is associated with the outcome only through the risk factor.8 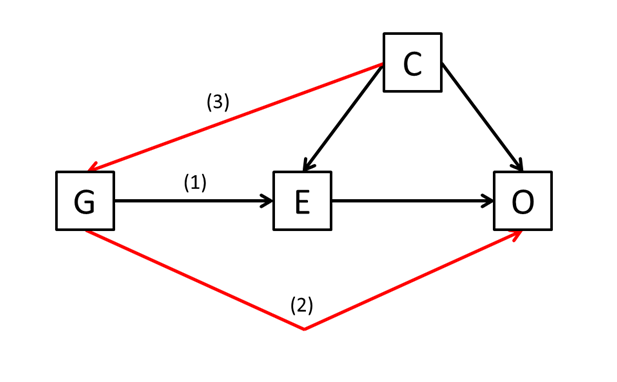 The risk factor (E) is causally associated with the outcome (O) if the following conditions are held: (1) the genetic variant (G) is a valid instrument, in that it is reliably associated with E; (2) there is no independent association with O, except through E; and (3) the instrument is independent of any measured or unmeasured confounding factors.
Modified from Davey Smith G, Hemani G. Mendelian randomization: genetic anchors for causal inference in epidemiological studies. Hum Mol Genet 2014;23:R89-98.

Recent methodological developments have expanded the basic principle of MR to further understand causal associations between traits and health outcomes. Here, we review these developments, presenting applications within cardiovascular and cardiometabolic health. MR is usually performed using a single variant whose biological effect on the risk factor is well understood. For example, individuals carrying a rare proprotein convertase subtilisin/kexin type 9 (PCSK9) allele, which lowers low-density lipoprotein (LDL) to below the population average (by 21-38mg/dL), showed a 40-80% lower incidence of myocardial infarction (MI).19 However, effects of common genetic variants are small and prone to weak instruments, which at worst can bias estimates towards a confounded observational estimate. Increasing the number of genetic variants included increases the variance explained in a given trait and can, therefore, improve the precision of the causal estimate.12-14,20,21

However, several limitations are introduced by using multiple variants. The possibility for pleiotropic effects is increased, violating the conditions for being a valid instrument for the trait.6 Therefore, genetic variants are usually only used as instruments if they are reliably detected, replicated, and, if possible, the biological mechanism by which the genetic variant influences the trait is known.3 In this scenario, multiple variants can actually be utilized to interrogate the presence of pleiotropy in which consistent estimates derived from multiple and independent pathways can confirm a fundamental biological relationship. This can be seen illustrated in the use of different loci in assessment of the contribution of LDL cholesterol (LDL-C) to coronary heart disease while estimates remain essentially the same.13

Obvious beneficial developments in the method involve the application of MR within two independent samples. The high costs or lack of appropriate measurements leads to relatively small datasets with either trait or gene measured, but not both. In this case, an estimate of the first-stage, genotype-trait association is obtained from one sample and applied to a second, which has only genotype and outcome measured.3 For example, the estimate of the genetic effect on C-reactive protein (CRP) obtained in one large population of European men was applied to a second collection of observational studies to investigate the potential causal association between circulating levels of CRP and the risk of non-fatal MI.22 This method has also been applied within the same sample, which has been randomly split.23

Reciprocal MR can be helpful to further untangle the directional association between a risk factor and outcome (Figure 2). For example, in a study of 5,804 elderly individuals within the Prospective Study of Pravastatin in the Elderly at Risk (PROSPER) study, allelic scores for CRP and adiposity were related to circulating levels of CRP and leptin, and body mass index (BMI).24,25 The CRP allelic score was associated with a decrease in CRP levels but not with measures of adiposity. Conversely, the adiposity allelic score was associated with an increase in BMI, circulating leptin levels and CRP levels, suggesting that elevated CRP levels, as a marker of inflammation, are generated by greater adiposity rather than the reverse. When used in situations in which there is little understanding of the biological effect of a variant on a trait, reciprocal MR can be potentially misleading.3 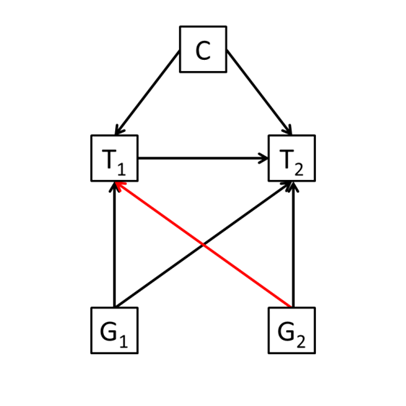 Reciprocal MR can be extended to explore the causal directions between networks of correlated variables.26,27 This method can be used to assess the potential mediation between environmental exposures and disease, a method termed 'two-step MR'.3,28-30 For example, higher BMI may increase the risk of coronary heart disease in part through its effect on blood pressure (BP).31,32 To date, two-step MR has been applied within epigenetic epidemiology (Figure 3); for example, it has been used to assess the mediation effect of methylation in the association between postnatal growth and childhood adiposity33 and red blood cell folate and cord blood methylation.34

In step 1 (left diagram), one SNP (G1), independent of any confounding factors (C), is used as a proxy for the environmental exposure (E) of an outcome (O) via differential methylation (M). G1 will only influence M if E is causally related to M (red line). In the second step (right diagram), another independent SNP (G2) is similarly used as a proxy for M to assess the causal association between M and O (red line).
Modified from Davey Smith G, Hemani G. Mendelian randomization: genetic anchors for causal inference in epidemiological studies. Hum Mol Genet 2014;23:R89-98.

As nature's RCT,35 MR is a robust method used to improve causal inference in observational associations, which are otherwise hampered by limitations that produce unreliable estimates of causality. The methodological developments discussed here and future directions, including hypothesis-free, factorial, and multi-phenotype MR,3 will further contribute to the identification of causal pathways between clinically relevant environmental exposures and pharmacological targets for prevention of adverse cardiometabolic health.