The U.S. Food and Drug Administration has approved novel oral anticoagulants (NOACs) dabigatran, rivaroxaban, apixaban, and edoxaban for the treatment of non-valvular atrial fibrillation (NVAF) and venous thromboembolism (VTE). These drugs were designed to have predictable pharmacokinetics and obviate the need for routine laboratory monitoring, offering a distinct advantage over vitamin K antagonists (VKAs), such as warfarin. Their efficacy and safety relative to warfarin has been demonstrated in the major clinical trials that led to their approval. In all of these trials, pre-specified doses of the study drug were administered without routine laboratory monitoring.1-8 This dosing strategy has raised concerns that the inevitable inter-individual variation in plasma drug concentrations may put some patients at increased risk of treatment failure or bleeding events. Furthermore, there are many clinical scenarios in which quantification of a NOAC's effect may be useful; these include cases of treatment failure, severe bleeding, suspected drug-drug interactions, suspected overdose, renal or hepatic failure, in patients at extremes of body weight, and during perioperative periods. Two of the major NOAC trials have reported wide variation in plasma drug levels among patients; however, interestingly, this variation seems to have little effect on some of the major outcomes of efficacy and safety.9,10 Direct measurement of plasma drug concentrations is impractical in clinical practice, and unfortunately, the standard coagulation assays such as prothrombin time/international normalized ratio (PT/INR), activated partial thromboplastin time (aPTT), thrombin time (TT), and anti-factor Xa (anti-Xa) activity are of limited utility in measuring NOAC activity. The aims of this Expert Analysis article are to examine the relationship between NOAC dosing, anticoagulant effect, patient outcomes, and to summarize the effects of NOACs on common assays of anticoagulation.

A poll on ACC.org asked clinicians if they would use an assay that could quickly and reliably measure a NOAC's anticoagulant effect, were it available, and 52% of the respondents indicated they would use the assay either "once, shortly after initiation" or "often." This interest in assays for NOAC activity likely has a number of origins: familiarity with the practice of monitoring INR during warfarin therapy, the seriousness of adverse events inherent to any anticoagulant (major bleeding, intracranial hemorrhage [ICH]), and emerging reports of variability in the efficacy and safety of the NOACs among some patient subgroups. For example, a recent retrospective study of 9,404 Medicare patients treated with either dabigatran or warfarin for newly diagnosed NVAF showed an increased risk of major bleeding with dabigatran as compared to warfarin (hazard ratio [HR] 1.58; 95% confidence interval [CI], 1.36-1.83), with especially increased risk among African Americans (HR 2.09; 95% CI, 1.68-2.60), and those with chronic kidney disease (HR 1.55; 95% CI, 1.32-1.82).11 Additionally, the Rivaroxaban versus Warfarin in Nonvalvular Atrial Fibrillation (ROCKET-AF) trial (comparing rivaroxaban to warfarin for the prevention of stroke and systemic embolic events [SEE] in NVAF) found that patients with a prior history of gastrointestinal (GI) bleeding were at increased risk of major bleeding with rivaroxaban as compared with warfarin (hazard ratio [HR] 2.33; 95% confidence interval [CI], 1.39-3.88).12 Edoxaban was recently approved in the U.S. for the prevention of stroke/SEE in NVAF with the caveat that it be avoided in patients with creatinine clearance >95 mL/min, as these patients had an increased risk of stroke/SEE as compared with warfarin.7

Dose adjustment depending on patient characteristics (creatinine clearance, body weight, concomitant interacting medications) is already part of the dosing recommendations for all NOACs, but the question of tailoring therapy by means of plasma drug levels or measures of anticoagulation remains an open one. Reports of patient-level data from the Randomized Evaluation of Long-Term Anticoagulation Therapy (RE-LY) and Effective Anticoagulation with Factor Xa Next Generation in Atrial Fibrillation—Thrombolysis in Myocardial Infarction 48 (ENGAGE AF-TIMI 48) trials have begun to shed some light on this matter.9,10

The RE-LY trial compared dabigatran to warfarin for prevention of stroke/SEE in NVAF.1 Plasma dabigatran levels were collected one month post-randomization from a subset of patients. There was wide variability in drug concentrations among individuals; for the 150 mg BID dose, trough levels ranged 39.8-215 ng/mL (10th-90th percentile). Patient characteristics that correlated with higher concentrations included reduced creatinine clearance (<80 mL/min), age ≥75 years, female sex, weight <50 kg, and high risk scores for stroke and bleeding (CHADS2, CHA2DS2-VASc, HAS-BLED). In subjects who had a major bleeding event (n = 323), the median trough concentration was 116 ng/mL (10th-90th percentile; 46.7-269 ng/mL) compared with 75.3 ng/mL (10th-90th percentile; 30.7-175 ng/mL) in those who had no bleed (n = 5,899). Median plasma concentrations did not differ in subjects with ischemic stroke or SEE when compared with levels in subjects without these events (80.6 vs. 78.3 ng/mL). Logistic regression analysis allowed the authors to create the following predictive models of risk of major bleed and risk of ischemic stroke/SEE:

The increased risk of major bleeding at higher plasma levels of dabigatran, especially in those ≥75 years of age, suggests an opportunity to prevent these events by adjusting the dose of dabigatran, though the optimal strategy for achieving this is uncertain. The flat curve for stroke/SEE versus drug concentration suggests that there is a wide therapeutic window for prevention of embolic events with dabigatran.

The ENGAGE AF-TIMI 48 trial compared edoxaban to warfarin for the prevention of stroke/SEE in NVAF; patients at risk of increased drug exposure (reduced creatinine clearance, low body weight, concomitant P-glycoprotein inhibitors) received a reduced dose of edoxaban.7 Significant inter-individual variability in trough plasma drug levels was again observed among all doses of edoxaban tested (e.g., for 60 mg daily, mean trough concentration was 48.5 ng/mL, standard deviation 45.8), and edoxaban levels correlated well with anti-Xa activity (r = 0.92-0.97). Higher plasma drug levels correlated with an increased risk of major bleeding and a reduced risk of stroke/SEE; there was no observed effect on the rate of ICH, which remained low even at higher plasma drug levels.

Despite this association between higher edoxaban concentrations and major bleeding, the authors caution against using plasma drug levels or anti-FXa activity to tailor therapy. They report that patients who received a dose reduction (30 mg daily) had lower edoxaban concentrations and anti-FXa activity, but had significantly increased rates of bleeding, stroke/SEE, and death as compared with patients without a dose reduction. This effect cannot be attributed solely to differences in drug effect, and likely reflects a difference in the baseline risk of these patients. Because both full dose and reduced dose edoxaban demonstrated efficacy and safety when compared with warfarin, they conclude that tailored therapy by means of patient characteristics alone, rather than plasma drug levels or assays of coagulation, is the best strategy for dosing edoxaban. Similar data are not yet available for other NOACs.13

Even if routine dosing is better determined by patient characteristics than by laboratory testing, there are circumstances in which the quantification of a NOAC's activity may be useful to clinicians and patients. Direct measurement of plasma drug concentrations by liquid chromatography tandem mass spectrometry is only available in reference laboratories and is not a practical method of monitoring NOAC therapy on a large scale. Standard coagulation assays (PT/INR, aPTT, TT, and anti-Xa activity) are variably affected by the NOACs, and an understanding of these effects can be useful to the clinician today, until more reliable NOAC assays are available.14

Quantification of NOAC activity by standard assays is difficult because even within a single assay, such as PT/INR, the response to a NOAC may vary greatly depending upon the reagent and analyzer used. Furthermore, the time that the sample is drawn relative to the most recent dose of a NOAC significantly impacts its measured effect, in contrast to VKAs, in which the PT/INR reflects the cumulative effect of multiple recent doses. Cuker et al. have published systematic reviews of laboratory measurements of dabigatran, rivaroxaban, apixaban, and edoxaban activity, and Table 1 is adapted from their analyses and other pharmacokinetic studies:15-20

Table 1: Effect of NOACs on Various Standard Assays of Anticoagulation

Figure 2: Sensitivity and Linearity of Coagulation Assays to the Oral Xa Inhibitors 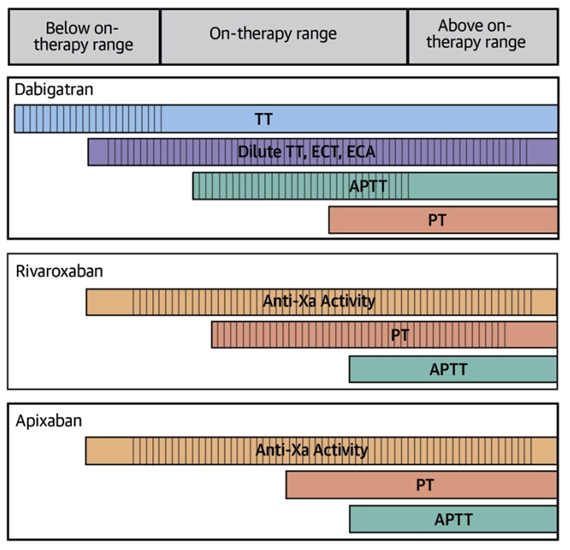 Dabigatran's effect may best be quantified with dilute TT and ecarin-based assays, but these tests are not widely available and are not standardized between laboratories; a normal aPTT or normal TT rules out significant levels of dabigatran. Among the factor Xa inhibitors, rivaroxaban and apixaban require an anti-Xa activity assay calibrated to the specific drug itself. A normal PT/INR excludes significant levels of rivaroxaban, but not apixaban. Edoxaban may be reliably measured with an anti-FXa assay calibrated to heparin or edoxaban. Thus, the standard coagulation assays may be of some utility when over- or under-dosing is suspected, but their ability to quantify drug effect is limited.

In summary, the following points may help guide safe and effective use of the NOACs in clinical practice, during this time when optimal dosing and monitoring strategies are still being determined:

YOU ARE HERE: Home > Latest in Cardiology > Coagulation Assays and the New Oral Anticoagulants