Con: The Obese Heart Failure Patient as a Candidate for Mechanical Circulatory Support: It's Rarely Appropriate

Obesity is a complex and multifactorial condition characterized by an excess of body fat that can present with or without reduction of the total body lean mass. The World Health Organization (WHO) defines overweight as a body mass index (BMI) of 25 kg/m2 or greater and obesity as a BMI ≥30 kg/m2. The prevalence of obesity worldwide has markedly increased over the last few decades, reaching epidemic proportions. In 2008, more than 1.4 billion adults worldwide were overweight. In the U.S., 69% of adults are overweight, and 33% are obese.1 Importantly, obesity commonly complicates heart failure populations and their management.

Several studies have demonstrated that obesity has numerous adverse effects on health, quality of life, and life expectancy. A high BMI has been shown to have an independent and direct negative effect on cardiac structure, as well as left ventricular (LV) systolic and, especially, diastolic function.2 Metabolic syndrome further increases cardiovascular risk over and above simple obesity and is likely related to the clustering of potent cardiovascular risk factors in addition to obesity. In a study of 2,902 patients, obese people with metabolic syndrome had a two-fold increased risk for cardiovascular disease (CVD). Normal weight people meeting criteria for metabolic syndrome had a three-fold increased risk for CVD.3

The management of obese patients with advanced refractory heart failure is particularly challenging since many benefits of advanced heart failure therapies may be attenuated or absent by the impact of obesity on these outcomes. However, information regarding outcomes following left ventricular assist device (LVAD) implantation and/or heart transplantation in these patients is limited, and expectations must commonly be extrapolated from other experiences. Moreover, reports and trials of advanced heart failure therapies have generally excluded obese patients with BMIs >35 (Table 1).4,5 Major LVAD trials (e.g., HeartMate II Bridge to Transplant [BTT] and Destination Therpay [DT]) have excluded subjects with BMI ≥40 kg/m2 and, therefore, LVAD outcomes in these specific patients is uncertain.2

Table 1: Adverse Outcomes Associated With Obesity in the Setting of LVAD, Heart Transplantation and Other Major Cardiothoracic Operations

In addition, a strong association between obesity and thrombosis has been reported in several observational studies. Chronic inflammation, impaired fibrinolysis, dysregulated expression and secretion of adipokines (e.g., leptin) appear to be major effector mechanisms of thrombosis in obesity.13 Morbid obesity (BMI ≥35 kg/m2) has also been associated with a prothrombotic state after cardiac surgery, with shortening of clotting time, partial thromboplastin time and an increase in platelet count and fibrinogen.14 A retrospective study of 956 LVAD patients noted that a higher BMI (29.1+/- 5.6 vs. 27+/-5.8 kg/m2) was an independent risk factor for pump thrombosis (HR: 1.71; 1.5-2.77; p = 0.031).15 A report from the Interagency Registry for Mechanically Assisted Circulatory Support (INTERMACS) that included 6,910 adult patients reported a similar effect of obesity on the risk of pump thrombosis.16

Many heart transplant programs impose weight limits (i.e., BMI ≤35 kg/m2) on their candidates and require patients over the weight limit to lose weight in order to qualify for heart transplantation. Many programs will place an LVAD in these patients using a "bridge to weight loss" strategy. Unfortunately, the vast majority of obese, LVAD-supported patients are unable to lose a sufficient amount of weight to qualify for heart transplantation.17 In fact, many of these patients gain weight and subsequently experience post-LVAD complications related to the progressive obesity. A retrospective study of 52 patients who underwent LVAD implantation at Johns Hopkins University between 2004 and 2009 reported that 52% of such subjects gained weight after LVAD therapy, with a mean weight gain of 6.5 kg. Among patients with BMI >35 kg/m2 before LVAD implantation, there was a mean weight gain of 0.7 kg after device therapy. Thirty percent of the patients who gained weight after LVAD implantation developed drive-line infections.18

In contrast to the poor outcomes with LVAD and transplant in obese patients with heart failure, several observational studies have suggested that the natural history of heart failure in obese patients may be better than underweight or even normal weight subjects. This phenomenon has been referred to as the "obesity paradox." This prognostic paradox appears to extend to advanced heart failure patients as well. Horwich et al. studied 1,203 patients with advanced heart failure and after adjusting for multiple confounders (hypertension, diabetes mellitus, peak VO2, age, gender, medications), obesity (BMI >31 kg/m2) was associated with a significant survival benefit at one and two years.21 Clark et al. studied 3,187 advanced heart failure patients (81% New York Heart Association [NYHA] III/IV) with a mean ejection fraction of 22.9%, mean left ventricular end-diastolic dimensions of 68.3 mm, mean peak VO2 13.5, for the primary outcomes of death, urgent heart transplantation or need for VAD placement. In men, two-year, event-free survival was better for high (BMI ≥25 kg/m2) versus normal BMI (63.2% vs. 53.5%, p <0.001) and for high (≥88 cm in women, ≥102 cm in men) versus normal WC (78.8% vs. 63.1%, p = 0.01). In women, two-year event-free survival was better for an elevated BMI (67.1% vs. 56.6%, P = 0.01).22 These observations should be taken into consideration when advanced therapies are being considered in any obese patient.

Ultimately, deciding which patients will benefit from advanced cardiac therapies and the ideal time for these interventions is still an "art and a science."23 In the obese patient, the available evidence clearly demonstrates poor outcomes with LVAD and transplantation. For the morbidly obese patients, these risks are exaggerated and should be prohibitive. Considering these observations and the obesity paradox, even at advanced stages of HF (Figure 1), the authors of this Expert Analysis article argue that clinicians should use a high threshold when considering LVAD support in obese patients and that a BMI ≥35 kg/ m2 should be considered a contraindication for this therapy. 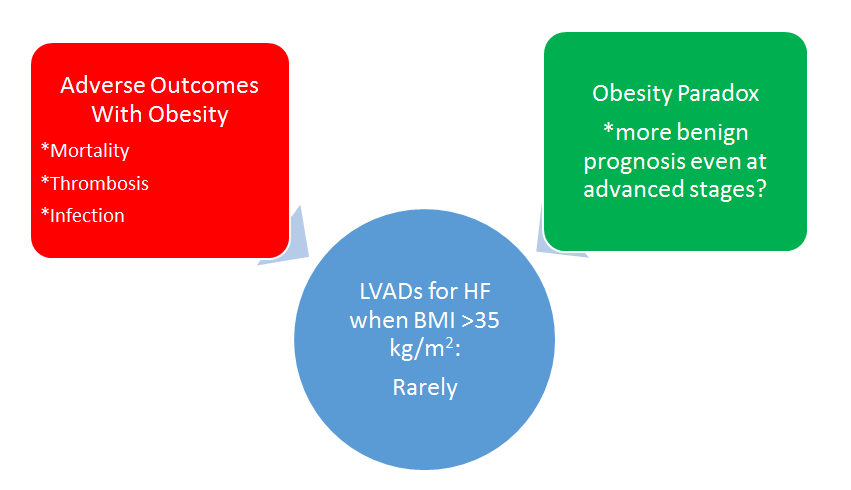 YOU ARE HERE: Home > Latest in Cardiology > Con: The Obese Heart Failure Patient as a Candidate for Mechanical Circulatory Support: It's Rarely Appropriate