On April 16, President Barack Obama signed into law the Medicare Access and CHIP Reauthorization Act of 2015 (MACRA), legislation which permanently repeals the Sustainable Growth Rate (SGR), establishes a framework for rewarding clinicians for value over volume, streamlines quality reporting programs into one system and reauthorizes two years of funding for the Children's Health Insurance Program (CHIP). ACC played an integral role – in conjunction with other medical specialty societies – in securing MACRA's passage into law after over two years of close collaboration with members of Congress.

"The ACC can best represent its members by 'getting credit' for the cognitive value we bring to patient care." – Cardiologist from Wisconsin

In a recent CardioSurve survey, nearly 8 out of 10 cardiologists (79%) rated the College's efforts to keep members apprised on SGR-related legislation and ultimately MACRA as very/extremely effective. In addition, a majority of those surveyed (60%), particularly more tenured cardiologists and those in private practice, credited the ACC for having a very strong impact in bringing about passage of the law.

Of the many elements included in MACRA, nearly 80% of those surveyed were very satisfied that the final law contained no requirement to participate in Maintenance of Certification, while 73% were very satisfied that the law finally repealed the flawed SGR formula in favor of a new payment framework. Reauthorization of CHIP (69%) and streamlining of quality reporting programs (55%) also ranked among the specific elements of the law strongly supported by the majority of cardiologists.

Moving forward, the specifics behind many of the provisions included in MACRA will need to be ironed out over the coming months and years. In addition, the College is closely monitoring a separate legislative package known as 21st Century Cures that is making its way through Congress. "21st Century Cures continues to drive home the importance of innovation in health care as we all work together toward more cost effective care and improved patient outcomes," said ACC President Kim Allan Williams, Sr., MD, FACC, in a statement.

According to the CardioSurve survey, the most appealing aspects of 21st Century Cures are the provisions to modernize clinical trials (65%); to break down barriers and increase collaboration and data sharing among patients, researchers, providers, and innovators (61%); and to increase funding for the National Institutes of Health (61%). 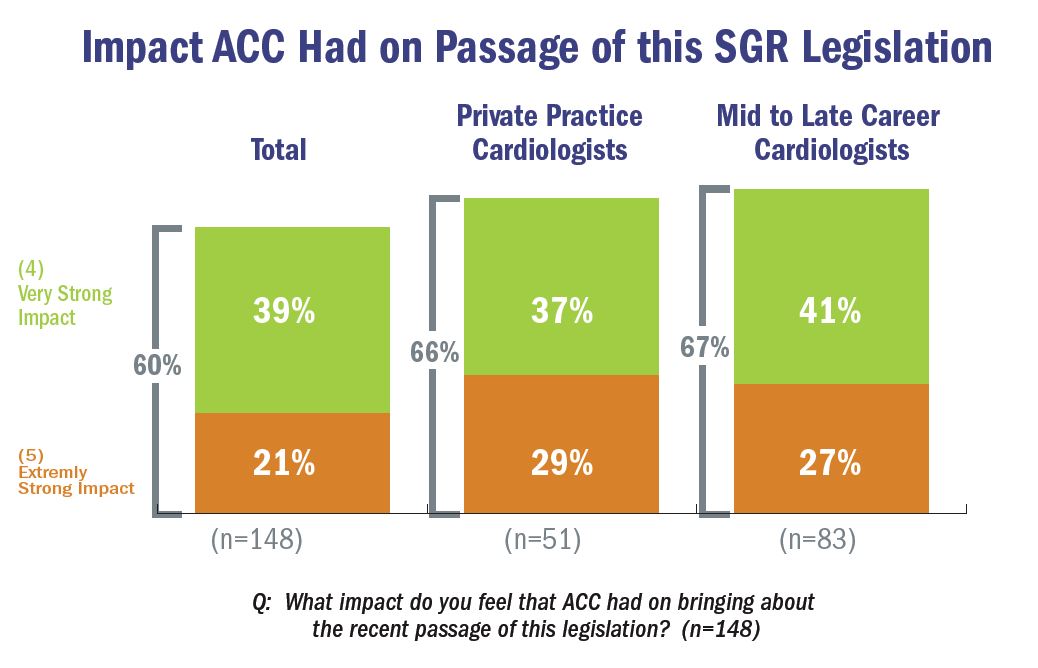 As the 21st Century Cures legislation moves forward, the College will be working to ensure its members' interests are represented in continuing discussions with lawmakers. Educating the cardiovascular community about elements of the bill as it moves from discussion to something more concrete is also key. Understanding what members in different practice settings and in various stages of their career value is critical to ensuring the best legislative outcome.

YOU ARE HERE: Home > Latest in Cardiology > The ACC Advocacy Advantage: From SGR Repeal to 21st Century Cures