MOC: A Road Under Repair

Last year, the American Board of Internal Medicine (ABIM), instituted widespread changes and a radical set of new requirements and standards for Maintenance of Certification (MOC). The modifications were applied to all physicians including those who received lifetime certification prior to 1990 and have sparked heated and continuous debate across all ABIM-covered physician specialties.

CardioSurve survey research over the last few years has shown the vast majority of cardiologists have serious concerns about the validity, relevance, utility, and associated financial and opportunity costs of meeting these revised requirements. In early 2014 following the initial release of the new requirements, the surveys CardioSurve conducted became instrumental in informing the ACC's strategy for addressing MOC with both members and the ABIM.

"Overall I feel the MOC and its tedious recertification requirements burden the practicing cardiologist in ways that are neither helpful for patient care nor conducive to professional development." – Cardiologist from Florida

To date, the College has responded in a forceful manner in a series of highlevel meetings with ABIM's board of directors and chief executive officer over the last year and a half. Many of these meetings have occurred in concert with other internal medicine subspecialty societies negatively affected by the MOC changes as well. The College has consistently shared the results of these meetings across all of its online and print communication channels, and has developed tools and resources to help members choosing to participate in ABIM's MOC process meet the requirements.

These efforts have resulted in the ABIM making several changes to its requirements, the first of which occurred this past February when the ABIM sent a letter to physicians that began with the statement: "Dear Internal Medicine Community, ABIM clearly got it wrong. We launched programs that weren't ready and we didn't deliver an MOC program that physicians found meaningful. We want to change that … We got it wrong and sincerely apologize. We are sorry." As of that communication, the ABIM suspended Part IV for at least two years; changed language used to describe a physician's MOC status from "meeting MOC requirements" to "participating in MOC"; froze MOC fees at 2014 levels for at least two years; and said it would recognize most forms of Accreditation Council for Continuing Medical Education-approved continuing medical education by the end of 2015.

Most recently, in July 2015, the ABIM also announced that on January 1, 2016 it will officially discontinue the requirement for maintaining underlying board certification in Cardiovascular Disease for subspecialists. For cardiology, this means that those specializing in interventional, electrophysiology, adult congenital and advanced heart failure will no longer need to pass both the general cardiology and sub-specialty boards. This change does not affect the requirements for initial certification.

Moving forward, the most recent ACC survey completed by 3,380 US cardiologists and conducted this past spring by ACC's U.S. Chapters, shows the majority of cardiologists (68%) still remain opposed to the new ABIM MOC requirements, although this number is down from 87% a year ago. While almost half of ACC members (46%) believe ACC leadership has performed very well in working with the ABIM to change the MOC process, having the College assume certification (51%) and remove MOC as a requirement (40%) remain the most desired MOC revisions. 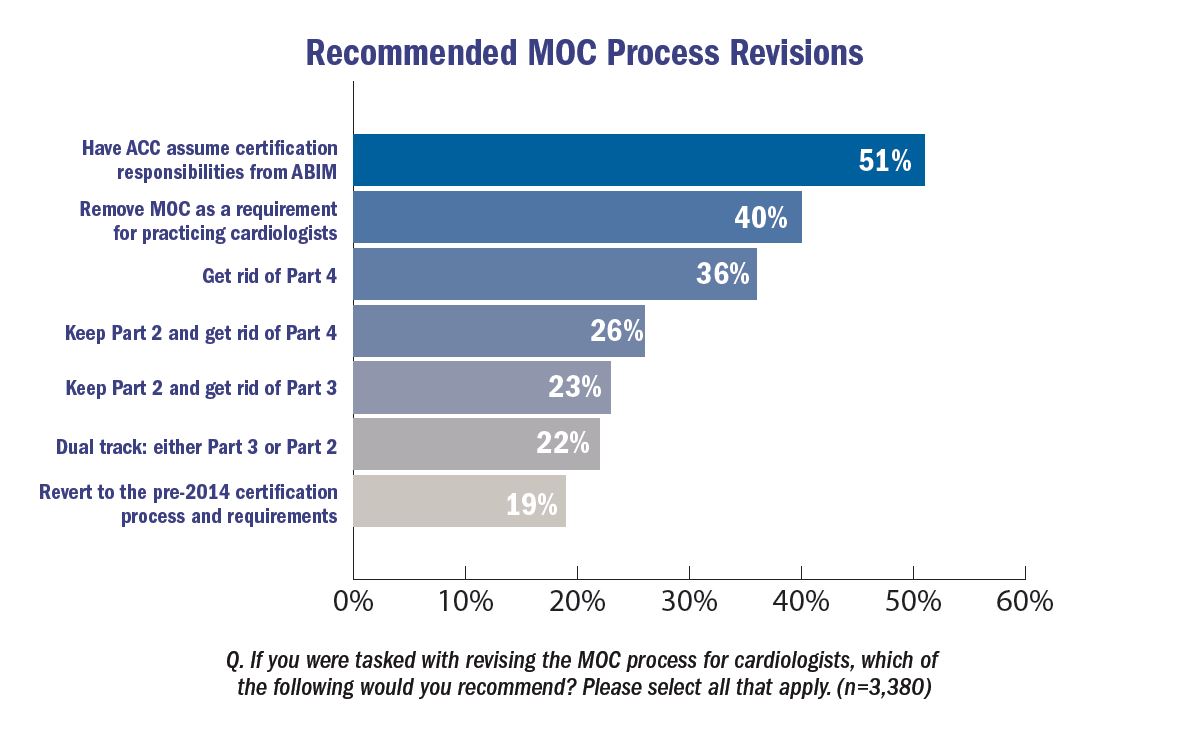 Already two ACC task forces have been developed to look at these and other options. The first task force is focused on continuing to provide input to ABIM to see if proposed temporary changes become permanent and to see if their processes can further improve to the extent that they are helpful and acceptable to members. Approximately 2 out of 5 respondents (40%) to the most recent ACC US Chapter survey expressed a desire for the College to work with ABIM to revise the MOC requirements and more than 1 out of 4 (28%) would like the ACC to develop more Part 2 materials.

A second task force is aggressively exploring an alternative board(s) concept since 2 out of 3 cardiologist (66%) want the College to explore assuming the recertification process. Potential possibilities could include: new board(s); working with already established alternate boards and/or other organizations; working within or outside of the American Board of Medical Specialties' framework; and other solutions.

While working as rapidly as possible, the great complexity of the situation also requires the College to be diligent in ensuring any and all alternatives are fully vetted. Members can stay up to date on the College's MOC efforts via the ACC in Touch Blog at blog.acc.org, and the ACC's MOC hub at ACC.org/MOC. Several Leadership Pages have also been published in the Journal of the American College of Cardiology outlining recent activities and the College's strategy.

YOU ARE HERE: Home > Latest in Cardiology > MOC: A Road Under Repair