ECMO for Adult Heart Disease: The Importance of a Team Approach

The use of veno-veno extracorporeal membrane oxygenation (ECMO)* for profound respiratory failure has been shown to improve survival when compared to conventional ventilator management strategies.1 Despite significant increases in utilization, survival for these complex, if not catastrophic, problems has only improved slightly over the years. Similarly, when used to provide both pulmonary and cardiac support, veno-arterial ECMO can be a useful and potentially life-saving therapeutic modality.2 Unfortunately, given the circumstances, randomized trials and standard practices are difficult to obtain. Nevertheless, there is an increasing amount of literature demonstrating the value of extracorporeal support in the setting of high-risk percutaneous coronary intervention (PCI), particularly when associated with acute cardiogenic shock.3

Conceptually, ECMO is quite simple. Venous drainage is obtained either through the large peripheral veins (femoral, internal jugular, subclavian) or centrally (right atrium) as the blood is actively pumped through a circuit that oxygenates as well as eliminates the carbon dioxide before pumping it back into the body.4 Blood return is either as close to the right atrium as possible for a veno-veno configuration or into a major artery, such as the femoral artery, axillary artery, or even the ascending aorta directly for veno-arterial support. Typically, veno-veno is utilized for isolated pulmonary failure, while veno-arterial may be required in the setting of associated cardiac failure. For veno-arterial, separate drainage and arterial inflow cannulas are required. For veno-veno, separate drainage and inflow cannulas can be used but single cannula, dual lumen systems are also available and are becoming more commonly used.5 Advances in oxygenator, pump, blood circuitry, and supporting technology, along with a greater recognition of the benefits of early therapy have encouraged the application of this invasive therapeutic modality. Historically, ECMO in patients with adult heart disease has been limited to the operating room in patients with catastrophic cardiac events or inability to wean from cardiopulmonary bypass after cardiac surgery; outcomes in this setting have been historically poor.6 Even in the modern era with access to advanced chronic left ventricular assist devices (VADs) and early access to heart transplantation, outcomes remain poor.7

Despite easier and quicker access to coronary reperfusion therapies, cardiogenic shock in the setting of an acute myocardial infarction either as a function of pump failure or a mechanical complication (acute ventricular septal defect, cardiac rupture, papillary muscle rupture, etc.) is not uncommon and is still associated with significantly poor short- and long-term outcomes.8 A key component of this reflects the difficulty in maintaining and organ perfusion, tissue oxygenation, and critical physiologic acid-base balance. Previous studies of mechanical support, such as the intra-aortic balloon pump (IABP) and other partial support therapies have failed to demonstrate a significant survival advantage and/or cost benefit.9 Significant limitations of these technologies include the lack of widespread availability, large costs, delays in implementation, and, most importantly, the degree of intensive, specialized support needed for the severity of hemodynamic instability. Furthermore, since such physiology is also associated with pulmonary edema, respiratory insufficiency, hypoxemia, and hypercarbia, ECMO has the advantage over other partial VADs in that it provides the ability optimize gas exchange.

ECMO has the advantage of being able to provide full cardiac and pulmonary support with up to 7 L/m of flow if necessary. Therapy can be initiated percutaneously – even in the setting of ongoing cardiopulmonary resuscitation. The assistance of a surgeon, although desirable, is not always necessary. Although some have argued that the significant cost associated with ECMO in terms of disposables and the need for continuous monitoring by specialty trained health care providers can be excessive, such costs are not disproportionately inconsistent with other therapies routinely employed in critical care medicine in general. Nevertheless, financial implications of ECMO therapy are lacking and difficult to determine due to the complexity of the intervention.

Early, non-randomized studies have demonstrated a short- and long-term survival advantage in patients in whom early mechanical support, including ECMO, is used as an initial therapy for cardiopulmonary stabilization when compared to early PCI or coronary artery bypass graft alone.11 Patients who were started on early mechanical support and failed to recover were subsequently bridged to either long-term mechanical support or heart transplantation. In patients treated with early mechanical support, their long-term outcome was significantly greater than those treated with medical therapy alone. In this study, of the 138 consecutive patients who presented with cardiogenic shock, 18 patients who were treated with early circulatory support had a 33% hospital mortality and a 30% five-year survival compared to an 81% hospital mortality and a 6.2% five-year survival for those treated with medical therapy alone. Criticisms of this data and other studies focused on the significant selection bias, lack of randomization, and variability in the management protocols. Nevertheless, these studies clearly demonstrate the proof of principal that ECMO when used in suitable candidates and implemented early before the onset of a reversible shock and organ failure can improve outcomes in patients otherwise destined to die.

Single-center studies, with dedicated teams and established protocols, have been able to show a significant improvement in 30-day survival in patients presenting with acute myocardial infarction complicated by cardiogenic shock.12 Survival was higher in those patients in whom early mechanical support was initiated and thereby allowing for optimal coronary revascularizations. In Sheu's study, 920 patients presented with a ST-segment elevation myocardial infarction (STEMI) – 115 (12.5%) were in cardiogenic shock. Those patients who presented with profound shock and were treated with early ECMO had an almost two-fold increase in 30-day survival. Those patients with incomplete revascularization or baseline heart failure had the worst short- and long-term prognosis. A similar study by Tsao also demonstrated a significant survival advantage in 33 of 58 patients treated with early ECMO for STEMI associated with cardiogenic shock in the first stage.13 Those treated with ECMO and IABP had a 64% one-year survival versus 24% for the 25 patients treated with IABP alone. In the second stage, there was a 54% (seven patients) 12-month survival for those patients treated with ECMO and IABP with STEMI-shock and refractory ventricular tachycardia/ventricular fibrillation versus 0% (zero) for those treated with IABP alone.

There is also growing evidence of a potential role for ECMO in patients sustaining witnessed-in-hospital cardiopulmonary arrest (extracorporeal cardiopulmonary resuscitation [E-CPR]). A recent meta-analysis has showed that centers with implemented protocols for such therapy had a significant survival advantage in this moribund patient population.14 In patients without a primary futile or life-limiting prognosis, ECMO-supported CPR not only results in a significant improvement in survival, but also substantially better neurologic outcomes when initiated early to achieve hemodynamic stability compared to conventional advanced cardiac life support resuscitation. Hospital survival to discharge for patients resuscitated with ECMO is 40% versus the 6-25% survival traditionally reported for in-hospital arrest. Obviously, as with other applications of expensive and resource-intensive therapy, patient selection is critical.

A recent review of percutaneous circulatory assist devices, including ECMO, emphasizes a potential role in high-risk coronary interventions while cautioning that current American and European guidelines indicate that strong and convincing evidence is limited. Clearly, further studies including randomized and multicenter clinical trials, although difficult to perform, are required.8 While there is growing interest in using percutaneous mechanical support therapies, including ECMO, in the support of high-risk interventions in patients who are otherwise stable (such as complex left main or multivessel stenting or percutaneous aortic valve replacement procedures), such data supporting use is lacking. While theoretically appealing as a physiologic "safety-net," difficulties in defining "high-risk" patients and clinical circumstances suggest that the role of ECMO in supporting catheter-based procedures still requires exploration.

Opponents of ECMO cite the limited convincing data, the lack of multicenter or randomized trials, and the overwhelming challenges and resources required to support these patients. In addition, there are inconsistent patient selection guidelines along with well-documented severe complications, such as strokes, hemorrhage, renal failure, and sepsis. Furthermore, ECMO support can be expensive with disposable circuit and pump cost in range of $10,000-$20,000 and total hospital bills sometimes exceeding $1 million in complex cases. Twenty-four hour bedside monitoring by perfusionists or respiratory therapists, in addition to one-on-one bedside critical care nursing, is required. Specialized physicians are also needed for the continuous medical optimization that such patients require. Probably the most important criticism is that patients who fail to recover often have limited long-term options. Unlike treatment with dialysis, in which therapy can be performed on a long-term, out-patient basis or even used as a bridge to widely available kidney transplantation, patients who failed to recover cardiopulmonary organ function while on ECMO are rarely appropriate candidates for long-term VADs or heart and/or lung transplantation.15,16 While highly specialized centers may be able to offer highly selective patients a long-term option, the tragic reality is that many of the patients treated with ECMO for acute heart failure die.

The Role of an ECMO Team

As with other areas of cardiovascular care, there is a growing observation that a dedicated ECMO Team is required to achieve optimal results. Numerous studies have recently emphasized that patients requiring ECMO be triaged to centers with teams built around dedicated and impassioned health care providers.1,17 In addition, perfusionists working alongside bedside critical care nurses have traditionally monitored the ECMO circuit. Several programs are developing models in which respiratory therapists assume key management roles in not only the ventilator but also the ECMO circuit. This concept emphasizes cross pollination and overlap of skills and experiences in an era of sometimes-limited but valuable human resources. The input of pharmacists (PharmDs), dieticians, and advanced practice nurses in the day-to-day management of these critically-ill patients cannot be over-emphasized. Furthermore, physicians across multiple disciplines, such as general cardiology, cardiac surgery, pulmonary critical care, infectious disease, palliative care, neurology, and more, must master communication and collaborative skills. Considering how quickly the clinical status of an ECMO patient can deteriorate, effective teamwork and leadership are critical (Figure 1). 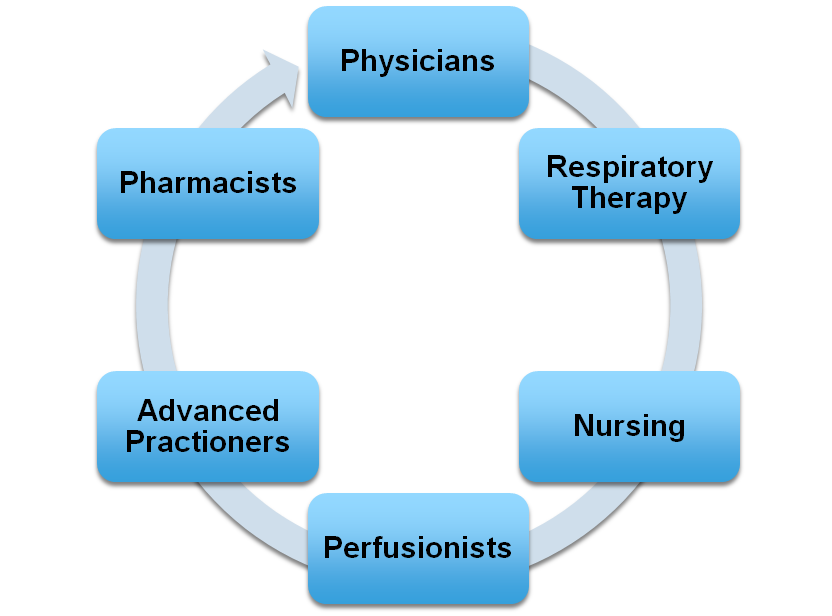 The success of an ECMO program is without a doubt dependent on the effective communication and collaborative efforts of a multi-disciplinary team of physicians and health-care providers.

Without a doubt, ECMO is a viable and perhaps invaluable therapy for adults with acute heart failure. Growing experience demonstrates an improved survival, particularly when therapy is initiated early in patients with cardiopulmonary shock in comparison to current standard therapies. As growing experiences evolve into randomized trials, society guidelines, and wider acceptance of this life-saving therapy, utilization will hopefully become the standard of care. Currently, use is often limited to those who have witnessed first-hand the seemingly miraculous survival of those patients who would otherwise die. 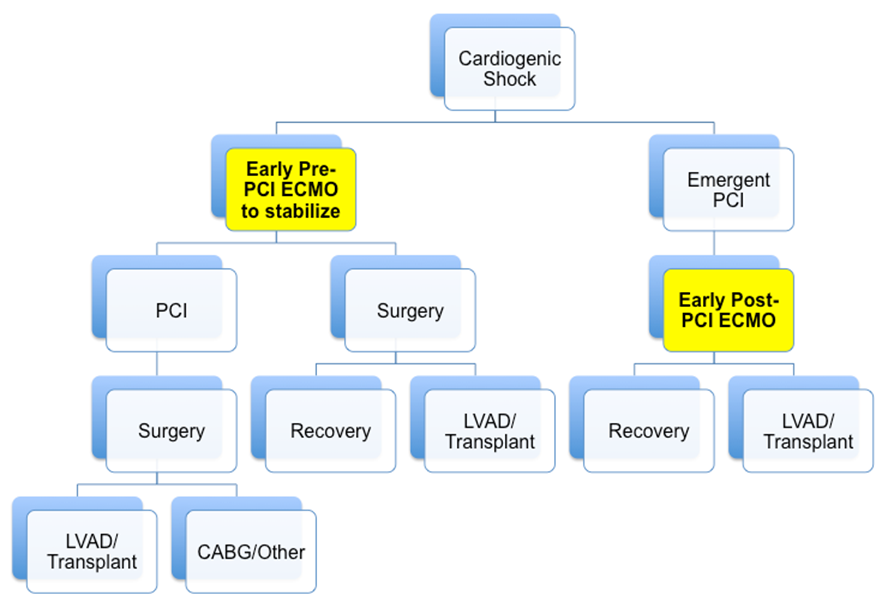 The evolving model of early ECMO – either at the first sign of cardiogenic shock to allow for stabilization and optimization of reperfusion (percutaneous coronary intervention [PCI] or surgery) strategies or early recognition of post-PCI shock with implementation of ECMO therapy prior to development of irreversible end-organ failure. The key is hemodynamic stabilization to allow for optimal therapies to be effective as either a bridge to recovery or to additional definitive interventions. Teamwork and communication at each stage is critical.

YOU ARE HERE: Home > Latest in Cardiology > ECMO for Adult Heart Disease: The Importance of a Team Approach