Medicare and Medicaid: A Look Back on 50 Years

Cover Story | Fifty years ago, on July 30, 1965, President Lyndon B. Johnson signed a landmark amendment to the Social Security Act, creating the Medicare and Medicaid programs.

"While Medicare and Medicaid are not without their critics – even at the time of enactment – there's no denying the impacts of the programs on the American health care landscape over the last 50 years," notes ACC President Kim Allan Williams Sr., MD, FACC, in a recent Leadership Page in the Journal of the American College of Cardiology.

What started as means of providing basic health insurance for elderly and poor Americans has grown to provide an even greater number of Americans access to necessary health care. According to the Centers for Medicare and Medicaid Services, about 55 million Americans currently depend on Medicare to cover 23 types of preventive services such as flu shots and diabetes screenings. Medicare also covers hospital stays, lab tests, critical supplies and prescription drugs. Meanwhile, Medicaid provides comprehensive coverage to more than 70 million eligible children, pregnant women, low-income adults and people living with disabilities, many of whom require long-term care and services. 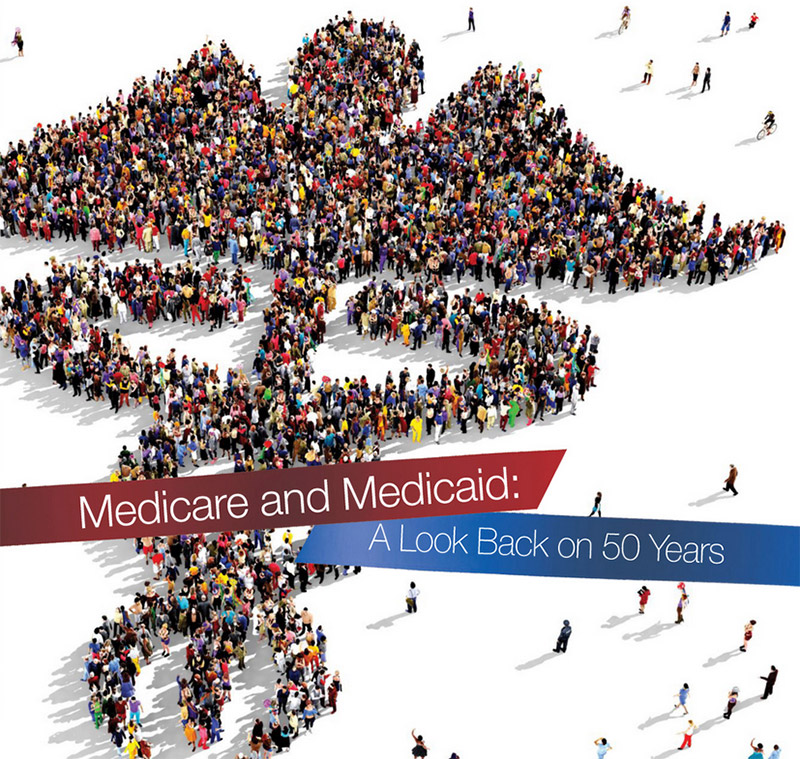 An article highlighting the 50th anniversary of Medicare and Medicaid, published earlier this year in the New England Journal of Medicine, credits the programs for increasing access to health care. Today, only 2 percent of the elderly lack health insurance, as compared with 48 percent in 1962. In addition, the programs have helped minimize some of the financial barriers to health care, leading to an increase in the percentage of elderly patients seeing physicians. Medicare can also take some credit for improvements in life expectancy beyond the age of 65. In 1965, life expectancy at birth in the U.S. was 70.2 years. Currently, life expectancy has reached a record high of 78.8 years.

"Medicare has contributed to an increase in life expectancy and now covers about 17 percent of the U.S. population," says ACC Past President John Gordon Harold, MD, MACC. "The program has transformed health care in the U.S. and has stimulated broad social change including the integration and expansion of hospitals."

The advent of Medicare and Medicaid was also a pivotal moment in ACC's history. The increasing role of the federal government in health care caused College leaders to recognize the importance of advocacy in helping ensure cardiovascular professionals were able to provide the best care to their patients. The ACC moved from New York City to Bethesda, MD, in 1965 to be closer to the National Institutes of Health and the nation's capital. Soon after, the College's Government Relations Committee formed and the ACC assumed an active role with legislators, advocating for physicians and their patients.

The growth of both Medicare and Medicaid over the years places them as the nation's largest insurers and as primary contributors to the country's increasing health care costs. More than 90 percent of older Americans are covered through Medicare alone, and the very likely prospect of accelerated and continued growth in program expenditures is one of the more predominant factors driving discussion and debate around reforms. Given this surge in growth and the longer life expectancy due in part to clinical advances primarily in the realm of disease detection and management, costs are on track to outpace growth in the overall economy.

Some possible solutions to the cost conundrum include a movement away from the traditional fee-for-service model toward alternative payment models that reward providers for improved outcomes, lower costs and greater coordination and integration of services. Value-based purchasing aims to provide financial incentives to providers for improvements in quality and cost. Bundled payment models set a fixed price for a "bundle" of services typically provided together to treat a specified condition, while blended payment models being used by some private payers and state Medicaid agencies combine shared savings and quality-based bonuses with a fee-for-service payment and a per-patient care management fee for patients served by an advanced primary care practice. Global payment is another concept gaining interest, particularly when it comes to preventive services, in that it would provide advance payment to cover all or most of a patient's care need. Accountable Care Organizations reward groups of providers that assume accountability for the costs and quality of care delivered with shared savings.

"Medicare is both a payment option and a health plan – that in and of itself creates conflict," says Cathleen Biga, MSN, RN, president and CEO of Cardiovascular Management of Illinois and a member of ACC's Advocacy Steering Committee. "Medicare needs to enter into the new environment and foster true value-based purchasing by ensuring highest quality care in the right setting." Development and use of alternative models, such as value-based purchasing, will likely increase as a result of the recent passage of the Medicare Access and CHIP Reauthorization Act (MACRA). MACRA will provide incentive payments to those who opt to participate in Medicare and private payer alternative payment models beginning in 2018. "With the recent passage of MACRA, we have started to leap the chasm from volume to value," says M. Eugene Sherman, MD, FACC, chair of the Advocacy Steering Committee.

In addition to new payment models, consideration needs to be given to the relationship between Medicare and Medicaid and preventive care. For example in his Leadership Page, Williams points out that screening and early treatment for diseases have proven to be crucial to optimizing physical health and achieving healthy aging. Medicare now covers many preventive services and screenings with no copayments, but there is more that can be done. Managing chronic conditions like diabetes and heart disease is also important. Currently, more than two-thirds of Medicare beneficiaries suffer from chronic conditions. Finding ways to prevent and manage these diseases earlier could save money and improve outcomes.

Nutrition and physical activity are also important, particularly in the elderly and young children. Studies show that a healthy diet in later years reduces the risk of osteoporosis, hypertension, cardiovascular diseases and certain cancers, while increasing physical activity reduces the risk of many negative health outcomes in older adults, including early death, cardiovascular disease, stroke, diabetes, cancer and more. The ACC in July convened a group of stakeholders from other medical societies, government agencies and consumer groups around opportunities to work together on innovative initiatives that could provide positive results both in terms of lowering costs and in improving quality of life for patients.

It is unlikely the original authors of the Medicare and Medicaid law expected the programs to evolve to what they are today. "Today's medical climate stands in strong contrast to the situation that existed more than 50 years ago when Representative Wilbur Mills and President Johnson found themselves strongly opposed by the majority of the community as they attempted to pass the original Medicare legislation," says Sherman.

However, no matter what form Medicare and Medicaid take in the future, the ACC is well positioned to play a role. Over the decades, the College has built up a robust Advocacy program that includes one of the top 10 medical society political action committees in the U.S. Members and staff are continually fostering relationships with lawmakers at the state and national levels and advocating for necessary research funding, as well as provisions that retain patient access to appropriate, cost-effective care.

In addition, Advocacy Steering Committee Chair-Elect Thad F. Waites, MD, FACC, notes ACC's leadership in the development and use of clinical data registries, as well as its position as the home for all members of the cardiovascular team bring tremendous value to discussions about the future of Medicare and the health care system as a whole. Sherman echoes this sentiment. "With the long traditions in cardiovascular medicine and surgery for data registries and evidence-based care, it is the destiny of the ACC to assume a leadership position in cost-effective, quality health care for all Americans," he says.

Read more on the Medicare and Medicaid Anniversary in Williams' Leadership Page in the Journal of the American College of Cardiology.

YOU ARE HERE: Home > Latest in Cardiology > Medicare and Medicaid: A Look Back on 50 Years