Sports-related sudden cardiac arrest (SCA), confounds most observers, as people engaged in athletic activity are generally viewed as healthier than sedentary people and thus less likely to experience cardiac arrest. Exercise-related SCA can lead to an exaggerated emotional reaction among the general lay community, and may even cast a negative light on exercise in general, thus obscuring the overwhelming global health benefits of regular exercise. Fortunately, the incidence of sports-related SCA is surprisingly low. While SCA overwhelming occurs in those over 35 years of age, only a small subset occurs during sport.

This review aims to describe the incidence of sports-related SCA, as well as its major causes. Also discussed are the sports paradox, and the potential advantages of experiencing SCA in a sports venue. The overwhelming benefits of exercise will be highlighted, including a brief review of the current recommendations.

Exercise-associated SCA is defined as occurring during or within one hour of physical activity. In North America and Europe, the overall incidence of SCA ranges from 500 to 1000 per million per year in the general population1-3, and varies with age, gender, race, and underlying medical problems. The percentage of those events occurring during sports is less than six percent (see Table 1).4-6 The most recent analysis of 'The Oregon Sudden Unexpected Death Study (OUDS),' a large, prospective, community-based study of out-of-hospital SCA, reports that between 2002−2013, SCA during sports accounted for five percent of all SCA, yielding an annual incidence of sports-related SCA in the middle-aged of approximately 22 per million per year, compared to 555 per million per year non sports-related SCA.6

Table 1: Incidence of SCA in General Population and Athletes

In the recent Marijon study, Sudden Cardiac Arrest During Sports Activity in Middle Age, jogging or running activities accounted for over 25% of sports-related SCA, underscoring the popularity of this activity as a form of exercise. Participation in endurance sports such as running is constantly growing, and the number of participants has been increasing steadily over the past 15 years. Of the approximately 20 million participants in foot races in the United States annually, 54% are older than 35 years of age, and 57% are male (see Figure 1).8

Between 1990 and 2013, the number of participating athletes who completed running races in the United States increased significantly to 20 million per year; 54% were older than 65 years of age, and 57% were male. 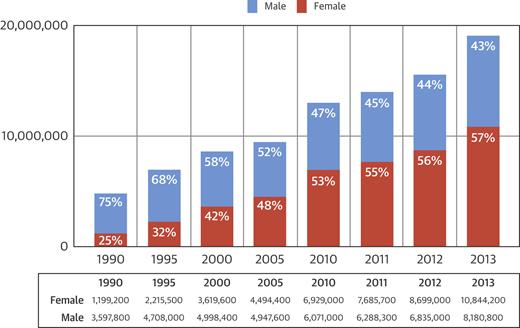 In comparison, the incidence of SCAs among half-marathon and marathon participants is estimated to be 5 to 20 per million runners.9 Somewhat surprisingly, the incidence of exercise-associated SCA in middle age (22 per million per year) is similar to athletes participating in the National Collegiate Athletic Association (NCAA) sports (18.6 per one million, per athlete year).10 Importantly, other serious non-cardiac events, such as heat stroke, are increasingly recognized as a greater risk to long distance runners than SCA.11

Current data strongly support a transient rise in incidence of SCA and acute myocardial infarction (AMI) during strenuous exercise.12-14 However, regular habitual exercise mitigates that risk. A retrospective analysis of 133 cases of SCA among people without known heart disease revealed that the relative risk of SCA with exercise was inversely related to the habitual exercise level.12 The relative risk of SCA among sedentary people was 56-fold higher during exercise. In contrast, the relative risk was significantly lower among men with the highest level of habitual vigorous activity. Additionally, despite the residual five-fold increased risk of SCA during vigorous activity, men with the highest habitual level of physical activity had a substantially lower relative risk (40% lower) of global SCA compared with sedentary controls.

Heavy physical exertion can trigger the onset of AMI, particularly in people who are typically sedentary.13 This association was evaluated among 1,228 confirmed cases of AMI. The incidence of AMI within one hour of strenuous physical activity (Six METs and above) was 4.4%. The relative risk was 50-fold higher among sedentary (exercise less than once per week) persons than those who exercised regularly (more than five times per week), as compared to those with less strenuous or no physical exertion.

While existence of a "sports paradox" (vigorous activity that acutely and transiently increases the risk of SCA and AMI) has been recognized, especially in those not habituated to exercise, overall, the long-term benefits outweigh the short-term risks related to physical activity. As a colleague says, "If you survive exercise, which you almost certainly will, you will undoubtedly live longer and healthier."

Causes of SCD Among the Middle-Age Population

Coronary artery disease (CAD), whether previously unsuspected or already established, remains the most common etiology (80% to 84%) for SCA in middle age population.6,15 Other, less common causes of sports-related SCA include hypertrophic cardiomyopathy, dilated cardiomyopathy, myocarditis, arrhythmogenic right ventricular dysplasia, valvular heart disease, and a small but distinct subgroup of unexplained SCA.6,8,15 Importantly, 36% of patients who suffered SCA in the Oregon-OUDS6 study reported typical cardiovascular (CV) symptoms during the week preceding SCA, and 56% had at least one CV risk factor.

Although the risk of SCA is transiently increased during vigorous exercise, habitual vigorous exercise is associated with an overall lower risk of SCA.13,14 The single greatest determinant of survival for victims of SCA is the time from collapse to defibrillation. Advanced life support in the field increases the likelihood of survival in cardiac arrest. This association has prompted both voluntary and compulsory placement of automated external defibrillators (AEDs) in exercise facilities.

Bystander cardiopulmonary resuscitation (CPR) and initial use of cardiac defibrillation are the strongest independent predictors for survival to hospital discharge among sports-related SCA patients.9 Sports-related SCA is more likely to be a witnessed event, suffer ventricular fibrillation, receive timely CPR and have higher survival to hospital discharge.6 Survival following SCA has been greatly improved by lay rescuer and public access defibrillation programs designed to shorten the time interval from SCA to shock delivery. Rapid defibrillation in public settings such as casinos, airlines, and airports has led to survival rates ranging from 41% to 74%, if bystander CPR was provided and defibrillation occurred within three to five minutes of collapse.16,17

SCA occurring at a sports venue may improve chances for survival. A recent retrospective analysis reported better survival rate among the SCA victims at exercise sites where AEDs are available than at non-exercise indoor sites (56% vs. 34%; p < 0.001).18 Early CPR and defibrillation with an AED in youth experiencing SCA can result in a survival rate of 64% to 74%.19 A 2-year prospective study in 2,149 high schools indicated that 87% of participating schools had an onsite AED program. At these schools with an onsite program, 89% of students and adults who developed SCA during sports or physical activity survived to hospital discharge.20 The survival rate for commotio cordis in young athletes has increased to 58% in the past few years, largely due to increased recognition, greater availability of AEDs, and early defibrillation.21

Thus, early CPR, defibrillation, and onsite AED programs are both critical and effective in maximizing survival following SCA. Continued expansion of these programs, including AED placement throughout running courses to enable rapid defibrillation of competitors, is recommended.

There is an inverse relationship between physical activity and risk of CAD, which is the most common etiology for sports-related SCA. Regular aerobic exercise, both directly and indirectly, results in lower risk for developing CAD. The least fit men and women have an increased risk of death from CAD or cardiovascular diseases (CVD) compared with fit individuals.

Given the extensive CV benefit of exercise, a minimum of 30 minutes of moderate-intensity physical activity (continuous or in 10-minute increments), preferably most days of the week, is recommended. This is equivalent to roughly 1.5 miles/day of brisk walking. Even 15 minutes per day or 90 minutes per week is associated with a survival benefit compared with physical inactivity.23

YOU ARE HERE: Home > Latest in Cardiology > Sudden Cardiac Arrest During Sports Activity in Middle Age