The Current Role of TMR in the Treatment of Angina

Chronic angina affects over seven million North Americans and despite optimal pharmacological and interventional therapies, 32% of these patients remain symptomatic from coronary artery disease (CAD).1,2 The treatment of patients with chronic refractory angina can be challenging. In addition to a growing number CAD cases not amenable to revascularization by coronary artery bypass surgery (CABG) or percutaneous coronary intervention (PCI), up the 25% of CABG patients report incomplete revascularization.3-5 As a result, there has been significant effort in developing alternative strategies to provide symptomatic relief. Various approaches have included novel pharmacologic antianginal agents, interventional approaches, and therapeutic angiogenesis.3,6 Transmyocardial laser revascularization (TMR) is an additional therapeutic option for patients that have exhausted nonsurgical therapies and are unsuitable for traditional revascularization techniques.

TMR is approved for clinical use by the Food and Drug Administration (FDA) to treat diffuse CAD not amenable to conventional medical or interventional therapies. In the past two decades, over 50,000 TMR procedures have been performed.7 Several randomized studies have indicated its efficacy in significant angina relief and demonstrated long-term safety.7-13 Based on the cumulative data, guidelines from the American College of Cardiology/American Heart Association (ACC/AHA), Society of Thoracic Surgeons (STS), and a consensus statement from the International Society of Minimally Invasive Cardiac Surgery (ISMICS) have favored the use of TMR in individuals with chronic refractory angina.14-16

The concept behind TMR was based on observations of reptilian and other primitive vertebrate hearts. The model of providing direct myocardial perfusion through these vascular channels between coronary arteries and cardiac chambers was subsequently adopted for treatment of reversible myocardial ischemia.17,18 Although the initial presence of perfusion channels formed by laser therapy was originally used to explain TMR's therapeutic effects, long-term patency of these TMR-created channels has been questioned based on multiple studies and autopsy series.7,19,20 Instead, post-TMR neovascularization and angiogenesis appears to be the predominant driving force for clinical improvement and cardioprotection.3,21 Upregulation of multiple growth factors within treated myocardium, including vascular endothelial growth factor (VEGF) and platelet-derived growth factor (PDGF), further implicate TMR's role in stimulating angiogenesis.22 Additionally, the use of positron emission tomography scanning, cardiac magnetic resonance, and other imaging modalities have supported this proangiogenic basis of improvement.7 Follow-up angiography obtained 10 years post-TMR identified a network of vessel collateralization supplying the heart, which was not present prior to TMR.23

To perform TMR, the laser system device is directly applied to the epicardium of the left ventricle, typically via a left anterolateral thoracotomy or robotic exposure (Figure 1).7 Numerous laser mediums have been evaluated for TMR, but only CO2 and Ho:YAG lasers have been employed clinically and are FDA-approved.7 Each particular device operates at a specific wavelength and produces a unique laser-tissue interaction. The Ho:YAG laser wavelength is 2,120 mm while the CO2 laser wavelength is 10,600 mm.7 In the Ho:YAG system, laser pulses are delivered at 5 Hertz utilizing 1-2 J and 6-8 watts/pulse. The laser is housed within a 1 mm fiber bundle, which is manually advanced through the myocardium as it creates this channel. Transmurality is determined based on auditory and tactile feedback. In contrast, the CO2 laser system utilizes a single 15-20 J pulse for 25-40 ms. Observation of blood vaporization within the ventricle using simultaneous transesophageal echocardiography serves as confirmation of adequate transmural channel formation with the CO2 laser system. 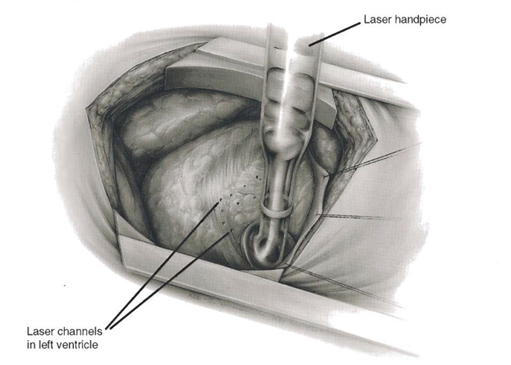 According to the STS Practice Guidelines, sole therapy TMR is indicated in patients with reversible ischemia causing severe angina–Canadian Cardiovascular Society (CCS) angina class III or IV14. Individuals undergoing TMR in isolation are not candidates for conventional revascularization interventions, such as CABG or PCI, due to the diffuse nature of disease and absence of suitable targets or conduits.14 As shown in Figure 2, several prospective randomized-control trials have evaluated the efficacy of sole TMR versus maximal medical management. All studies demonstrated significant angina reduction in the TMR groups.8-11,13. When treatment success was defined by a decrease in at least two CCS angina classes, success rates of 25-75% were observed with TMR at one year, compared to 0-32% in the medically-managed cohorts. Meta-analysis of these results revealed a summary odds ratio of 9.3 (95% CI=4.6-18.5; p<0.001).7 Functional status following intervention was superior based on exercise capacity (time to angina improved 78±118 s vs 66±104 s; p<0.01), quality of life (SF-36 increased 38% vs 6%; p<0.001), and nitrate usage (decreased 27% vs 7%; p=0.025).8,11,13 All-cause mortality at one year was similar in both groups (OR=1.08; 95% CI=0.60-1.95; p=0.79)15. 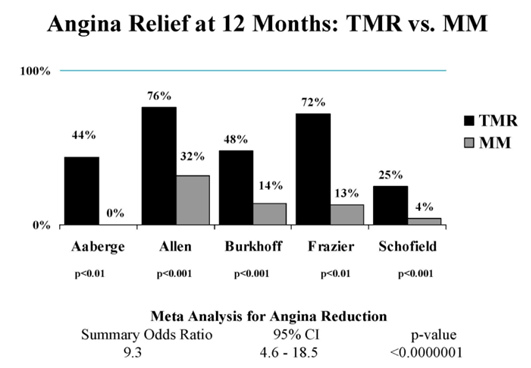 Myocardial perfusion scans were obtained in the four largest randomized studies to evaluate the degree of reversible ischemia.9-11,13 Results from CO2 laser trials reveal a 20% perfusion improvement in previously ischemic areas, an overall reduction in the number of reversible (ischemic) defects, and no significant increase in fixed (scar) defects.11,13 This is contrary to the medical therapy group, where a 27% decline in perfusion to ischemic areas and nearly doubling of the number of fixed defects was seen during the same period. The two studies where follow-up scans were obtained in Ho:YAG TMR-treated patients did not show a significant difference in myocardial perfusion between TMR and medical therapy cohorts at 12 months.9,10.

Long-term follow-up of prospectively randomized patients reveal that angina relief appears to be sustained. Similar to the 12-month results, significantly more TMR-treated individuals were observed to have angina reduction of at least two classes compared to baseline (88% vs. 44%; p<0.001) or angina-free (33% vs. 11%; p=0.02) at five years.24 As expected, improvement in quality of life was also maintained and a lower number of hospitalizations attributed to unstable angina was observed at a mean follow-up of 43 months.25 Additional long-term analysis, conducted jointly by the FDA, STS, and Duke Clinical Research Institute evaluating outcomes between Ho:YAG and CO2 laser systems showed no significant differences in procedural outcomes at five years (mortality risk-adjusted HR 1.11; 95% CI 0.69-1.81).26

Although the operative technique for TMR is not particularly complex, appropriate patient selection is imperative and the key to success for this intervention. Randomized and nonrandomized trials have revealed that individuals with unstable angina had higher operative mortality rates compared to those who were allowed to recover and no longer required IV heparin or nitroglycerin.7,11 Other predictors for perioperative morbidity and mortality include elderly-aged patients, ongoing acute myocardial ischemia, and decompensated heart failure with an ejection fraction <30%.14,27,28 Based on these results, the STS Practice Guidelines classify TMR sole therapy for unstable angina as a class IIB indication.14. In an effort to reduce perioperative morbidity, minimally invasive approaches have been attempted. Percutaneous laser revascularization (PMR) utilizes a Ho:YAG laser under electromechanical mapping guidance to create 2 mm divots into the subendocardium. Unfortunately, multiple studies, including two prospective randomized trials, have failed to demonstrate any clinical benefit from PMR.7,29,30 It is believed that the lack of similar TMR-observed efficacy may be due to inadequate channel depth, insufficient number of channels created, and inherent limitations of the Ho:YAG laser medium as it relates to improving myocardial perfusion.7

TMR as an adjunct to CABG is reserved for patients of any CCS angina class presenting with diffuse CAD where CABG alone would likely result in incomplete revascularization.7,14 Two randomized-controlled trials evaluated CABG+TMR therapy with CABG alone. Combination treatment was associated with lower perioperative mortality (1.5% vs. 7.6%; p=0.02), increased freedom from major adverse cardiac events at one month (97% vs. 91%; p=0.04), and improved one-year survival (95% vs. 89%; p=0.05).7,11,31 In long-term follow-up, patients receiving TMR in combination with CABG experienced a decreased rate of revascularization compared to the CABG-only group (0% vs. 24%; p=0.05).32 Furthermore, the CABG+TMR cohort was observed to have sustained reduction in New York Heart Association (NYHA) classification for class III/IV at four years (p<0.0001).33 Long-term survival was not significantly different between groups (HR=1.41; 95% CI=0.28-1.81; p=0.47).33

Using observational data from the STS National Cardiac Database, further evaluations into the practice of TMR as an adjunct to CABG have been performed. Between 1998 and 2003, the outcomes of 5,618 patients who underwent CABG+TMR were queried and compared to isolated CABG operations during the same period. As demonstrated in Table 1, the CABG+TMR cohort had significantly increased prevalence of risk factors for diffuse atherosclerosis versus CABG-only patients.34 These surrogate markers for advanced cardiac disease, including diabetes, peripheral vascular disease, previous myocardial infarction, and three-vessel CAD, are also known to impact morbidity and mortality. Naturally, CABG+TMR patients were observed to have an increased unadjusted mortality (3.8% vs. 2.7%; p<0.001) but when unstable angina patients were removed, the observed mortality with combined therapy decreased to 2.7% with an observed/expected mortality ratio of 0.87. When a subset of under-revascularized patients, those with three-vessel CAD who received fewer than three bypass grafts, was further evaluated, the addition of TMR did not affect short-term mortality rate compared to CABG alone (5.2% vs. 4.3%; p=0.13).34

The management of patients with chronic refractory angina who have exhausted conventional therapeutic options remains a complex challenge, demanding contemporary treatments. Individuals with this debilitating disease may benefit from FDA-approved TMR therapy, either alone or in combination with CABG. Multiple randomized studies and long-term follow-ups have confirmed that TMR is a viable alternative, as supported by consensus statements from the ACC/AHA, STS, and ISMICS. In carefully selected patients, safety of this procedure has been demonstrated and can provide substantial and sustained symptomatic relief from chronic refractory angina.

YOU ARE HERE: Home > Latest in Cardiology > The Current Role of TMR in the Treatment of Angina