What Type of Stent Should Be Used to Treat Patients With STEMI? Part I: Bare Metal Stents (BMS) Remains the First Choice in ST-elevation Myocardial Infarction (STEMI)

Editor's Note: This is Part I of a two-part Expert Analysis. Go to Part II.

The treatment of symptomatic coronary artery disease (CAD) has seen great advances especially in regards to the percutaneous treatment of acute coronary syndromes. While drug eluting stents (DES) reduce restenosis rates compared to bare metal stents (BMS), their use has been associated with an increased risk of late stent thrombosis due to delayed endothelial coverage and accelerated neointimal atherosclerosis (i.e. "neoatherosclerosis") secondary to disrupted endothelial junctions (Figure 1), both contributors to stent failure. These drawbacks mean their use needs to be carefully considered within the context of certain clinical situations for which they are employed. While primary percutaneous coronary intervention (PCI) for ST segment elevation myocardial infarction (STEMI) reduces risk of death compared with medical therapy alone, the advantage of DES over BMS for this indication remains uncertain1. 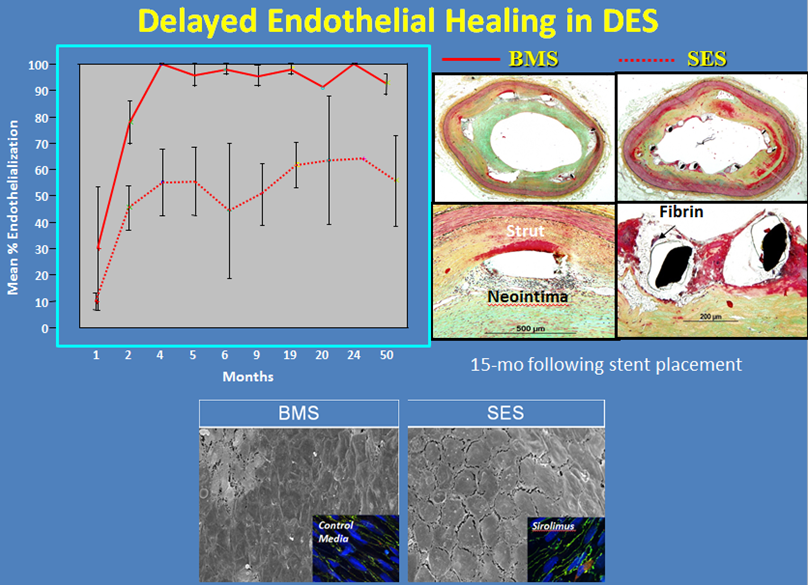 Figure 1. Endothelial healing of 1st generation DES compared with BMS. In pathologic studies, BMS shows greater endothelial healing at 1 month and up to 50 months. This is an example of BMS and sirolimus eluting stents (SES) in a single patient 15 months after implant showing complete endothelial healing of BMS but largely incomplete healing of SES (patient died of non-cardiac causes). Below panels show an example of scanning electron microscopy of BMS and SES showing incomplete endothelial barrier formation in the SES with disruption of barrier molecules (i.e. VE cadherin) from the cell borders into the cytosol (seen in green in the histologic insets). This is thought to be a mechanism in accelerated neoatherosclerosis in DES compared with BMS and a contributor to late stent failure.

The pivotal trials of drug eluting stents (DES) have been largely in the setting of symptomatic, "stable" coronary disease where acute coronary syndromes (ACS) patients are specifically excluded2. The U.S. Food and Drug Administration approval of DES was initially for the treatment of stable CAD. In fact, use of DES for the treatment of ACS is still considered an "off-label" use of these devices. Large registries, such as the Bern Rotterdam Experience, suggested 1st generation DES are associated with a steady rate of late stent thrombosis up to three years from the initial stent implantation with ACS being an independent predictor3. A meta-analysis of 16 randomized trials of early generation DES versus BMS for STEMI has shown reduced target-vessel revascularization. There was a trend towards fewer definite stent thrombosis within the first year but an increase in stent thromboses in later years, which seemingly offset any early benefit4. Some well-done trials such as the PASSION trial, in which BMS were compared to paclitaxel eluting stents for STEMI, did not show any benefit in terms of myocardial infarction, target lesion revascularization (TLR), or cardiac death at five year follow-up5. Real world registries of BMS versus DES for STEMI have shown similar findings, with an increased risk of late events with DES6. 2nd generation DES designed with thinner struts and side chain modifications of sirolimus meant to improve tissue retention of drug have generally shown improved outcomes compared with 1st generation DES. However, fewer trials have been conducted using 2nd generation DES in STEMI patients. In one of the few, the EXAMINATION trial randomized patients with STEMI to everolimus eluting stents versus BMS and showed no differences in the combined endpoint of death, MI, or TLR at 2 years7.

Additional safety concerns for the use of DES compared with BMS in the setting of primary PCI for STEMI also exist. In this scenario, unlike in clinical trials, the clinical picture is often incomplete. Does the patient have issues with compliance with dual anti-platelet therapy? Does the patient have bleeding risks or upcoming procedures? There are also larger economic concerns offering DES as they are not yet unequivocally proven better and are more costly than BMS. In conclusion, in the setting of primary PCI for STEMI the efficacy and safety of SES still remain uncertain, and thus their use may not be justified.

YOU ARE HERE: Home > Latest in Cardiology > What Type of Stent Should Be Used to Treat Patients With STEMI? Part I: Bare Metal Stents (BMS) Remains the First Choice in ST-elevation Myocardial Infarction (STEMI)