Get to Know Your Leaders | Kim A. Eagle, MD, MACC, found himself drawn to the notion of service at a young age. While in college at Oregon State University he thought about joining the ministry, but also found himself drawn to science and human science in particular. An advisor pointed him in the direction of medicine, noting that the field would blend those two interests. "I'm very blessed that I made that choice," he says, adding that he feels like the cardiovascular field chose him instead of the other way around. "In medical school I found myself running to the library to read about cardiovascular problems," he says. "I naturally was drawn to it." 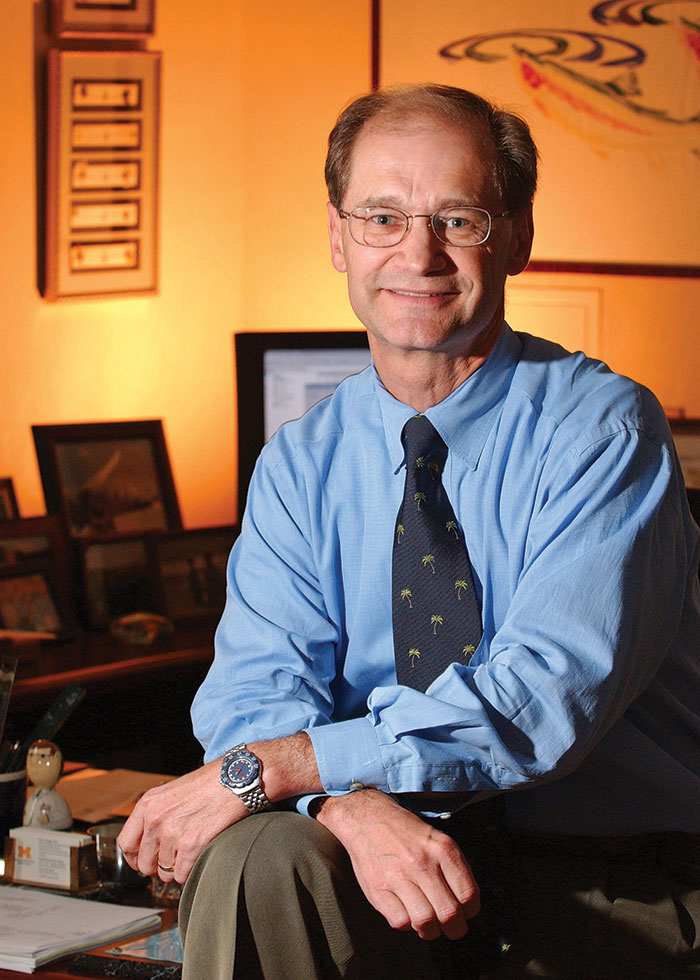 Now the editor of ACC.org, Eagle has always been interested in education. When he was a cardiovascular fellow, one of his mentors, Adolph M. Hutter, MD, MACC, suggested Eagle join the ACC. Upon joining, he quickly became involved with the College's educational efforts. However, his path to becoming editor of ACC.org first began during his tenure at Massachusetts General Hospital where he served as the editor of a newsletter on cardiovascular disease published by the New England Journal of Medicine. Soon after, Eagle became the editor of ACC's Current Journal Review, which would then become CardioSource Journal Scan when the publication shifted from print to digital. Eagle was also involved with CardioSource.org during its early stages and served as interim editor in 2001. Last year, when CardioSource.org started its transition to ACC.org and was in need of an editor, Eagle jumped at the opportunity to apply, saying he "[loves] working with the College in both digital and live education."

Even with the large overhaul ACC.org has seen, Eagle and the ACC.org team have many more plans for the future. "ACC.org is really at the beginning of its journey of meeting the needs of our members," he says. "We've come a long way to make the site more searchable, personal and faster, but we have a long way to go. I'm excited about our team in content creation and our ability to deliver information where the members want it, how they want it and when they want it." There are plans for greater linkage between ACC.org and the Journal of the American College of Cardiology website as well as expanded e-learning capabilities so that members can get their Maintenance of Certification and Continuing Medical Education credits at a moment's notice. Eagle also has a vision for greater personalization such as packaging key information in different ways for members depending on their areas of interest. But all of these changes won't come overnight. "There will be steady changes as ACC.org morphs into its destiny for the College," he says.

In addition to his interest in educational roles, Eagle has previously held numerous leadership positions within the College. He has been a member of the Guideline Task Force, chair of the Task Force for the Development of Performance Measures in Cardiovascular Care, has served on the Annual Scientific Session Program Committee, and was a member Board of Trustees from 2001 to 2005. Eagle is currently the director of the Samuel and Jean Frankel Cardiovascular Center at the University of Michigan, where his research programs have led quality improvement initiatives across the state of Michigan in acute myocardial infarction, heart failure and coronary angioplasty.

While serving on the National Heart, Lung, and Blood Institute's External Advisory Committee from 2002 to 2006, Eagle heard from experts about childhood obesity and the current status of alleviating the problem. He says that he was completely discouraged about the minimal work being done to actually influence how much children ate and moved. "I thought to myself, I live in a college community that has recreational parks, many programs and full service grocery stores available to everyone. I wanted to try to do something here."

He decided to help create Project Healthy Schools (PHS), which started in 2004 and was initially funded by the University of Michigan and several grateful patients. PHS is a health curriculum for middle schools, focusing on children aged 12 to 14. He explains that this age group was chosen because it is a time of transition for kids and a time when kids might challenge their parents about what kind of food is being served at home and other lifestyle decisions. The aim is to establish behaviors that may last throughout their lifetime.

The program has five simple goals that form the basis of a healthy lifestyle: eat more fruits and vegetables, reduce sugary food and beverages, eat less fast and fatty food, be active every day (exercise at least 150 minutes per week) and spend less mindless time in front of a screen. PHS works with participating school cafeterias to switch in healthier food choices, including the food and beverages found in vending machines. The students participate in 10 interactive lessons at school and teachers are given lesson plans with all necessary information and materials. Students also participate in a variety of events throughout the school year to encourage them to embrace the five goals. These activities include gardening, bike rides, field days and 5Ks. School Wellness Teams, made up of administrators, teachers, food service staff, and even students and parents who want to be involved, work to improve the school environments and plan activities to celebrate and improve health.

Prior to and after the pilot program was completed at one school over a 10-month period, the team had students take standardized questionnaires and undergo stress testing, blood pressure, body mass index measurements and laboratory tests. The results showed that the program had made a difference compared to baseline measurements. "The kids tell us they are being more active and the data reflects that," Eagle says. "They also appear to be more fit." PHS also reports that these benefits appear to persist in participants even after the program ends, as three year follow-up data has shown the continued effectiveness of the program. PHS has published findings from the program in peer-reviewed journals over the 10 years of its existence and presented findings at many regional and national conferences, including an abstract at ACC.14.

Eagle notes that the program will be in 60 Michigan middle schools this year and has reached over 40,000 students to date. Students from areas with fewer resources such as full service grocery stores and parks, see the most benefit from the program, Eagle explains, saying that it is an example of the "dose effect." "We have a bigger impact on the health of these students than those living in communities with a lot of resources," he adds. "However, it is harder to sustain in these schools because there is a greater turnover of teachers and administrators. If we systematize this, we can really make a difference in the health of our country. Nothing would bring me more joy than to see a health curriculum in every middle school in the state." PHS is also working to develop a new high school curriculum, where students will sign on to learn about the science of being healthy.

Eagle adds that cardiologists and other health care providers have a unique role in the health of children. "I think people listen to health care providers more than politicians. Parents of our children think doctors and nurses should be leading efforts to improve our community health. It is important for those of us in this profession to be involved. Being a vocal health professional helps to make these changes happen."

He is also involved in numerous other projects including research on quality, cost-effectiveness, the use of practice guidelines in cardiovascular care, acute coronary syndromes, aortic diseases and cardiovascular disease in special populations. He also founded Project My Heart Your Heart, which is developing the processes through which pacemakers might be recycled for reuse in low income nations.

Eagle attributes his passion for philanthropy to a mentor who helped him early in his studies. He was working as a fishing guide to put himself through school, when a client, Don Hopkins, took an interest in his career. He offered to help pay for his college and medical school tuition. "Along with my parents, he allowed me to go through school debt free and not have that burden hanging over my head. I saw the power of philanthropy at a young age and that resonated with me," he says.

In addition to Hutter, Hopkins and his parents, Eagle says he's had "too many mentors to count," but does name a few that have had a huge impact. Larry Cohen, MD, FACC, who mentored him as a student, "showed me what being a cardiologist was all about. He taught be about the importance of bedside cardiology and relationships with patients and families." Other mentors throughout Eagles' career include Roman W. DeSanctis, MD, FACC, who he calls his "medical father" and who guided him in his studies of aortic diseases and as a writer in clinical research. He credits George Thibault, MD, with helping him to think about the quality and value in medicine. He says that Valentin Fuster, MD, PhD, MACC, editor-in-chief of the Journal of the American College of Cardiology, who he worked with directly for two years, had a profound influence on him. "He made me think about the whole world as a place for medicine and research and how we might connect with others. Valentin expanded my vision. His guidance and way of thinking led me to start the International Registry of Acute Aortic Dissection." Eagle also credits his parents with teaching him the importance of hard work and honesty. He is particularly grateful for his colleagues at the University of Michigan's Frankel Cardiovascular Center. "My day-to-day colleagues keep me grounded in our core values of respect and compassion, collaboration, innovation and a commitment to excellence."

Family is also important to Eagle, who says he is grateful to his wife, Darlene, and his son, Taylor. Having grown up in Yellowstone, MT, he enjoys fly fishing and skiing. He volunteers at the University of Michigan's St. Mary's Student Parish and cheers on the Wolverines during the football and basketball seasons. He is also involved with the Ann Arbor Symphony Orchestra, where he served as president for several years. As a board member for World Medical Relief, he retains a desire to help improve health in low-income nations.

He values the friendships he has made through the College, saying that the ACC "has allowed me to meet fabulous people from all over the world who are doing great things in care, education and research. It's such a joy to be involved in the ACC. I never would have imagined that it would have become such an important part of my professional experience." "Faith, family, friends, colleagues and health … these are the things that really matter," he says.