How Should We Manage Patients With STEMI and Multivessel Disease? Part I - Treat the Culprit Lesion and FFR on the Others

Editor's Note: This is Part I of a two-part Expert Analysis. Go to Part II.

A 62-year-old man comes to the emergency room with 2 hours of chest pain and an ECG showing inferior ST elevation (figure 1). The STEMI team is activated and within 60 minutes coronary angiography shows 100% RCA occlusion and 60% LAD stenosis (figure 2). We perform PCI with DES of the RCA. Should we proceed to also stent the LAD? This decision point is at the heart of the debate regarding current AHA/ACC/SCAI guidelines for the treatment of STEMI in patients with multivessel CAD (not in cardiogenic shock) – treat only the culprit vessel or treat all vessels at the index procedure. The debate is fueled by three recent randomized studies1-3 indicating better outcomes with complete revascularization (table 1); in 1 of these, the DANAMI3-PRIMULTI trial3 used fractional flow reserve (FFR) of the non-culprit artery to improve decision making.

The PRAMI1 and CvLPRIT2 studies found improved outcomes with complete revascularization performed at the same time or within the index hospitalization. The non-infarct related arteries (non-IRA) were treated based on the angiographic appearance of the lesions, an approach which has the potential to over-or undertreat the non-IRA because of the well-known limitations of equating angiographic visual severity to hemodynamic lesion significance.

In the PRIMULTI Study, following the PCI of the culprit STEMI vessel, FFR was used to measure the hemodynamic lesion severity in any non-IRAs considered angiographically significant, which treated the artery based on an FFR<0.80. 627 patients were enrolled in the study; 313 patients were in the culprit only group and had no further invasive treatment after primary PCI of the IRA, while 314 patients were assigned to complete revascularization, with only those in whom the non-IRA vessels had FFR <0.80 had attempted PCI. At a follow-up of 27 months (range 12–44 months), the primary endpoint (composite of death, MI, urgent revascularization) was present in 68 (22%) patients in the culprit only group compared to 40 (13%) in the FFR guided STEMI revascularization group (hazard ratio 0∙56, 95% CI 0∙38–0∙83; p=0∙004). The follow-up events related to the untreated non-IRA vessels are pending.

Despite the fact that the ischemia (FFR) guided group in the PRIMULTI study had a lower major adverse cardiac events (MACE rate), there is a question whether FFR will be reliable in the ACS setting. The FFR, i.e. the translesional distal to aortic pressure ratio (Pd/Pa) at maximal hyperemia, measures the percent of maximal flow across an epicardial lesion compared to flow through the same vessel in the theoretical absence of the lesion. FFR is directly related to flow; flow is directly related to the myocardial territory or mass supplied by the stenosis; for a given stenosis, the higher the flow, the lower the FFR and vice versa. Thus, for the same stenosis at two points in time, the FFR could decrease if the flow measured at a later time increased due to myocardial bed changes (as might be expected with infarct healing )(Figure 3). Moreover, even in stable anginal patients, the amount of flow to a specific territory across a stenosis explains a common problem related to accepting the FFR. This problem, the 'visual functional mismatch' between the angiographic stenosis and the FFR, is commonly seen with severe angiographic lesions in small branches supplying a small myocardial mass having a high FFR, or conversely, mild lesions in large branches supplying a large myocardial mass having a low FFR.

Because of a changing myocardial bed during the recuperation phase after an acute infarction, FFR is not used in the STEMI culprit artery until 4-6 days after the event when myocardial function is believed to stabilize.4-5 For the non-IRA in the STEMI/NSTEMI patients, the zone of myocardial injury of the culprit vessel is unknown but may extend close to the region supplied by the non-IRA. Thus a normal FFR at the time of STEMI might be lower several days later if the myocardial flow improves to the remote non-IRA zone, which would change the initial treatment decision based on a high FFR. To address the stability of FFR in the non-IRA in STEMI/NSTEMI patients, we can look at the ACS patient subset of FAME study,6 in which 101 patients undergoing PCI for both STEMI and NSTEMI had 112 non-culprit lesions assessed by FFR at the index procedure and repeated 35±4 days later. The FFR of these non-culprit stenoses was 0.77±0.13 during the index procedure and was identical at 0.77±0.13 at the time of follow-up. In those with unstable angina or NSTEMI, there was no evidence for a changing FFR over three months of follow-up. In the FAME study, FFR guided interventions for both the stable angina and the NSTEMI patients produced similar relative risk reductions of MACE and death.7

One of the confounding features of decisions to treat the non-IRA, in addition to variable myocardial dysfunction, is the heightened biologic activity of lesions with a stimulated inflammatory and prothrombotic state, and active myocardial compensatory contractile responses in the non-infarct territories. How much these factors play a role in whether a non-infarct vessel should be treated even if FFR is negative remains unknown.

The preliminary data from the COMPARE ACUTE multicenter trial8 reported on results in 408 patients with multi-vessel disease and STEMI undergoing primary PCI. A total of 613 FFR measurements were made in non-culprit lesions. FFR measured in a non-culprit lesion was negative in 57% (>0.80) and positive in (43%), highlighting the fact that non-culprit lesions identified during STEMI may be innocent bystanders and may not need to be treated.

Given the results of the FFR for non-IRA and the PRIMULTI studies, wherein long term outcomes remain durable and a function of the FFR, as in the 5-year FAME data presented at the ESC 2015, the use of FFR for decisions about treating the non-IRA may emerge as a dominant strategy for the revascularization of multivessel disease in the STEMI patient. 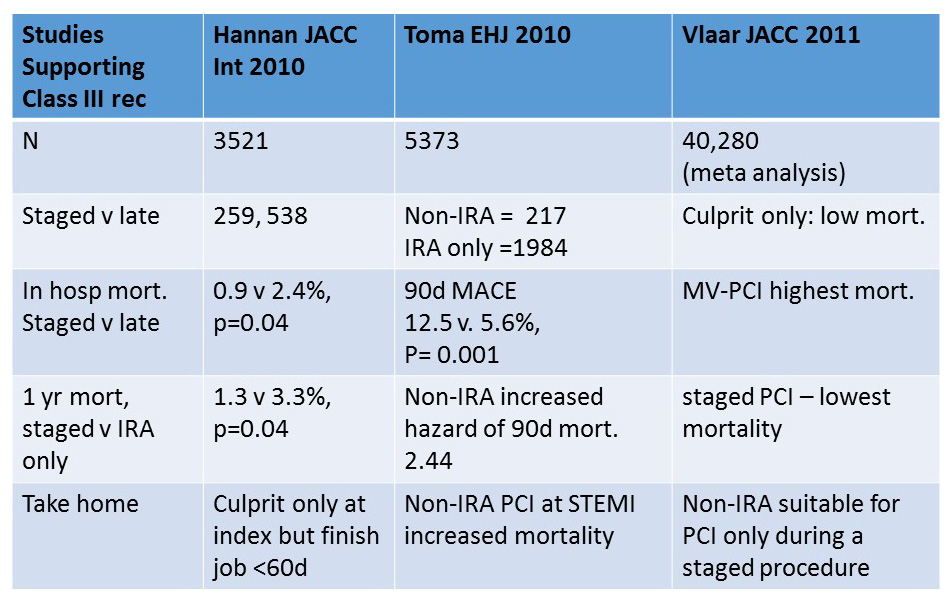 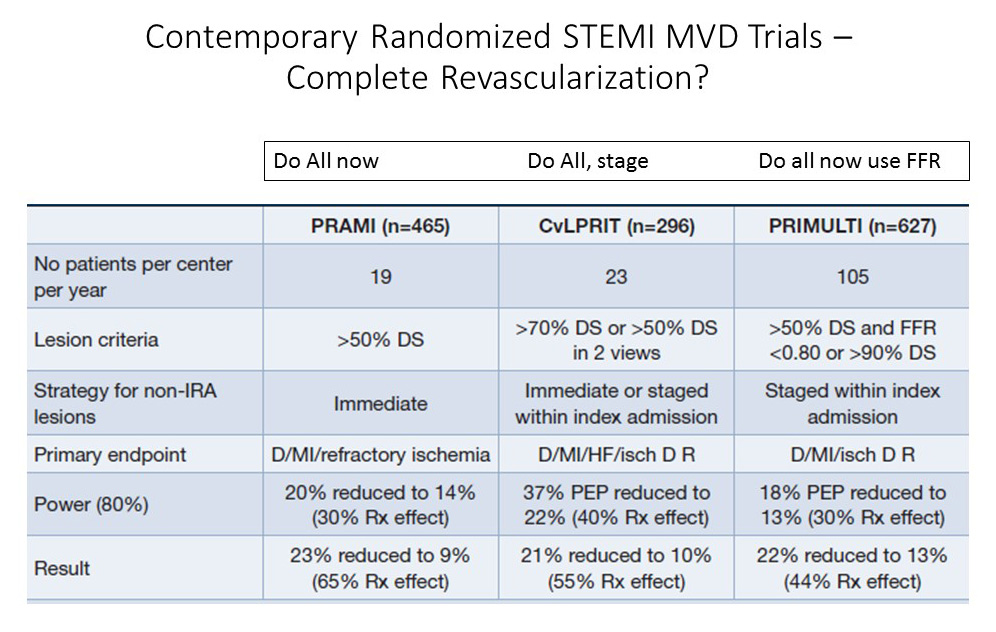 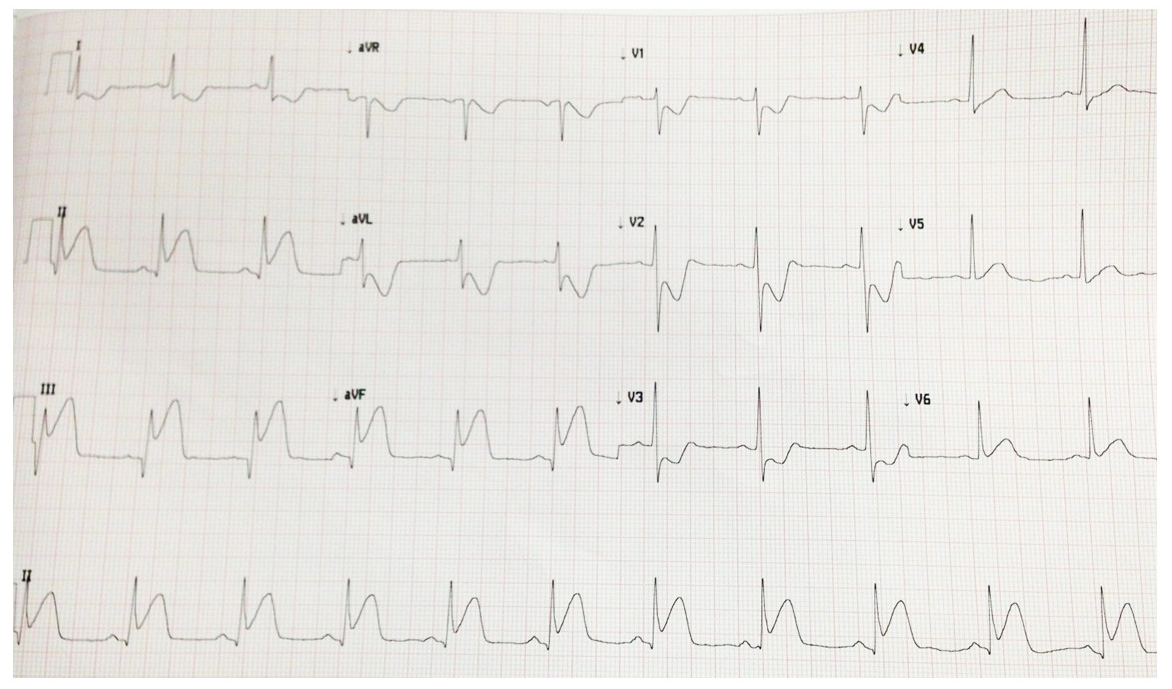 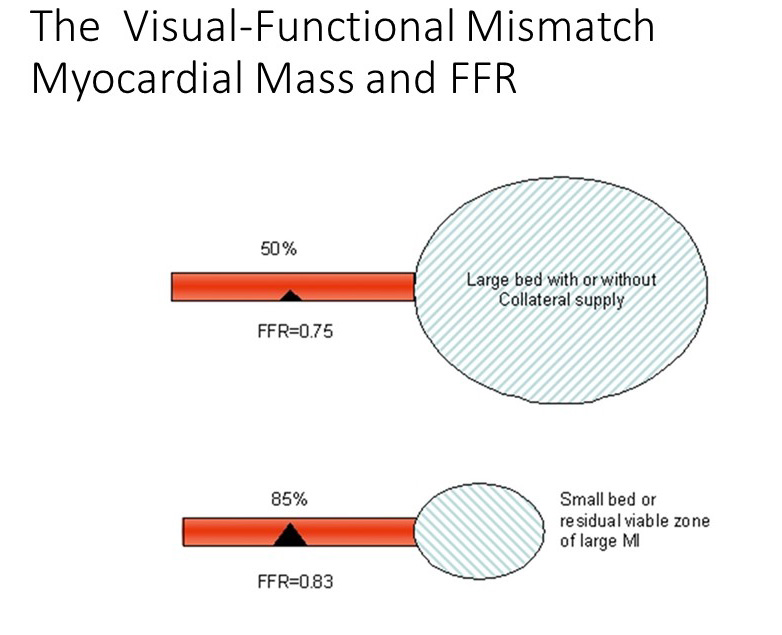 Figure 3: Influence of myocardial bed size on FFR. (Top) A mild lesion of 50% supplying a large territory of myocardium can have a low FFR of 0.75. (Bottom) In contrast a severe angiographic narrowing of 85% supplying a small myocardial territory can have a high FFR of 0.83. In a STEMI patient the lower panel might represent the acute phase and the upper panel the recuperation phase with changing FFR values influencing the decision making at the time of STEMI. Similar conditions may exist for the non-infarct related artery assessments.

YOU ARE HERE: Home > Latest in Cardiology > How Should We Manage Patients With STEMI and Multivessel Disease? Part I - Treat the Culprit Lesion and FFR on the Others