The TECOS Trial of Sitagliptin vs. Placebo: Context and Cardiovascular Observations

More than 29 million people in the United States1 and 387 million worldwide2 are estimated to live with diabetes mellitus (diagnosed or undiagnosed), and the global burden of diabetes is projected to exceed 590 million by 2035, largely attributable to the increase in type 2 diabetes (T2DM).3 People with T2DM have a two- to three-fold increased risk of myocardial infarction (MI) or stroke and an approximately two-fold increased risk of death compared with patients without diabetes, independent of other cardiovascular (CV) risk factors.4

Modern medicine's armamentarium of oral antihyperglycemic drugs has increased dramatically over the past two decades (Figure 1), with drug development and approval hinging primarily on effective lowering of hyperglycemia as reflected by hemoglobin A1c (HbA1c). However, while the degree of hyperglycemia in T2DM patients tracks epidemiologically with increased risk of diabetic complications, there is compelling evidence that controlling hyperglycemia does not commensurately reduce CV risk. In fact, the effects of individual drugs on CV outcomes seem to be uncoupled from their ability to lower HbA1c. 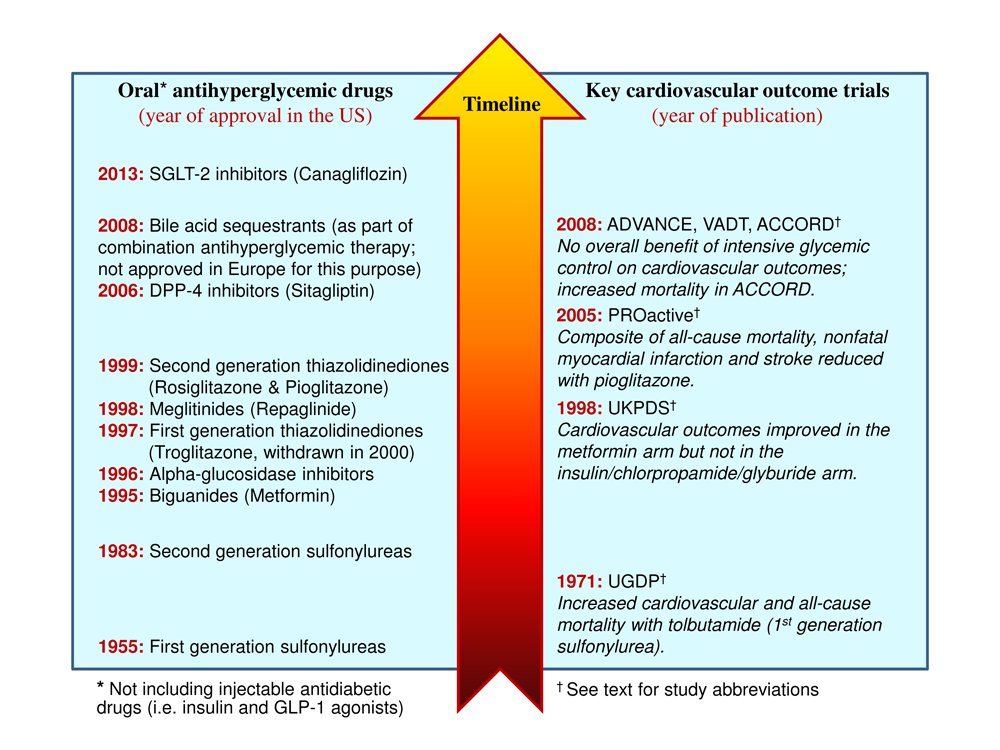 The above statement is based on a number of large clinical trials conducted over the years. One early example is the University Group Diabetes Project (UGDP) trial,5 which reported increased cardiovascular and all-cause mortality with tolbutamide, a first-generation sulfonylurea, leading to early termination of that arm of the trial and to a mandated cardiovascular warning on the product label of all sulfonylureas sold in the U.S. that persists to this day. In the long-running United Kingdom Prospective Diabetes Study (UKPDS), intensive therapy with chlorpropamide, glibenclamide (a.k.a., glyburide in the U.S.) or insulin was not associated with improved cardiovascular outcomes, in spite of a significant ~0.9% reduction of HbA1c.6 In contrast, treatment with metformin in another arm of the UKPDS7, and with pioglitazone in the PROspective pioglitAzone Clinical Trial In macroVascular Events (PROactive) trial,8 were among the handful of antihyperglycemic interventions shown to actually associate with improved CV outcomes, in spite of relatively modest HbA1c improvements (~0.4%). Any remaining doubts with regard to the uncoupling of HbA1c reduction from cardiovascular outcomes were emphatically dispelled in 2008 with the publication of three large randomized trials specifically designed to test the effects of various degrees of glycemic control on cardiovascular outcomes in patients with T2DM and increased cardiovascular risk: the Action in Diabetes and Vascular Disease: Preterax and Diamicron Modified Release Controlled Evaluation (ADVANCE) trial,9 the Veterans Affairs Diabetes Trial (VADT),10 and the Action to Control Cardiovascular Risk in Diabetes (ACCORD) trial.11 Taken together, these three studies randomized over 23,000 patients to "intensive" vs. "standard" glycemic control strategies, with the "intensive" arms aiming to lower HbA1c to normal or near-normal levels using different drugs and drug combinations. The key findings from these trials were no statistically significant differences between study arms in the primary composite cardiovascular endpoints in ADVANCE and VADT, and a significant increased increase in all-cause and cardiovascular mortality in ACCORD, prompting early termination of the intensive arm of that study.

While these studies had many differences (including inclusion/exclusion criteria, drugs and drug combinations used, HbA1c contrasts achieved, and others), which leave much room for interpretation of their apparently discordant results, the one thing that emerges crystal clear is that HbA1c is not a reliable surrogate of T2DM treatment effectiveness as it pertains to cardiovascular outcomes. Furthermore, certain treatment strategies may have adverse effects and may lead to paradoxically worse cardiovascular outcomes in spite of their glucose control effectiveness. Whether mediated by "on-target" or "off-target" mechanisms, and whether specific to a drug or generalizable to a class of drugs, such adverse effects are impossible to predict in the absence of adequately-powered clinical trials designed and conducted to assess cardiovascular outcomes with specific T2DM treatment strategies.

Initiated shortly before publication of the FDA guidance, the recently published Trial Evaluating Cardiovascular Outcomes with Sitagliptin (TECOS)14 was carried out in the spirit of the FDA's recommendations, even though there had been no signal of increased cardiovascular risk in the pre-marketing data. TECOS enrolled patients with T2DM and established cardiovascular disease (defined as a history of major coronary artery disease, ischemic cerebrovascular disease, or atherosclerotic peripheral arterial disease), already treated with individually-appropriate, open-label therapies, with HbA1c at enrollment between 6.5% and 8.0%. Patients were excluded if they had taken any incretin-based therapy (dipeptidyl peptidase-4 inhibitor or glucagon-like peptide-1 receptor agonist) or a thiazolidinedione other than pioglitazone during the preceding three months, a history of severe hypoglycemia during the preceding year, or severely reduced estimated glomerular filtration rate (eGFR) at baseline (<30 ml/min/1.73 m2). A total of 14,671 patients were randomized to addition of the dipeptidyl peptidase-4 (DPP-4) inhibitor sitagliptin or placebo to existing therapies, with the primary endpoint a composite of incident cardiovascular death, non-fatal MI, non-fatal stroke, or hospitalization for unstable angina. The study was designed to test non-inferiority but was also adequately powered to detect superiority.

Over a median follow-up of three years, patients randomized to sitagliptin had a mean reduction of ~0.29% in HbA1c and required fewer additional antihyperglycemic agents compared with those in the placebo group. The rate of adverse events was comparable between study arms, with the exception of acute pancreatitis, which was uncommon but numerically more frequent in patients randomized to sitagliptin (23 events in the sitagliptin group versus 12 events in the placebo group, P = 0.07 in the intention-to-treat analysis).

The primary composite cardiovascular outcome, comprising time to the first event of cardiovascular death, myocardial infarction, stroke, or hospitalization for unstable angina, occurred in 839 patients in the sitagliptin group (11.4%) and 851 in the placebo group (11.6%), yielding a hazard ratio (HR) of 0.98 (95% confidence interval [CI], 0.88–1.09; P <0.001 for non-inferiority in the pre-specified per-protocol analysis). Very similar results were obtained in the intention-to-treat analysis, and testing for superiority was not statistically significant. There were also no significant differences in a number of secondary outcomes, including all-cause mortality, components of the primary composite outcome analyzed individually or in other combinations, and hospitalization for heart failure.

This latter finding is particularly notable in the context of two other recently published trials of other DPP-4 inhibitors: Saxagliptin Assessment of Vascular Outcomes Recorded in Patients with Diabetes Mellitus–Thrombolysis in Myocardial Infarction (SAVOR-TIMI 53)15 and Examination of Cardiovascular Outcomes with Alogliptin versus Standard of Care (EXAMINE).16 Similar to TECOS, these trials reported non-inferiority of the study drugs versus placebo with regard to major cardiovascular events. However, there was a statistically significant increase in the risk of hospitalization for heart failure with saxagliptin in SAVOR-TIMI 53 (HR 1.27; 95% CI, 1.07–1.51; P=0.007). Although the main EXAMINE report did not include heart failure, a potential signal for increased risk of heart failure hospitalization with alogliptin became the subject of extensive discussions, with a non-significant trend reported in the overall study population (HR 1.19, 95% CI, 0.90–1.58), and a significantly increased risk in those without heart failure at baseline (HR 1.76; 95% CI, 1.07–2.90) reported in post-hoc analyses.17 In contrast, there was no signal of increased heart failure risk in TECOS, including in various subgroup analyses such as in those with versus without heart failure at baseline, and including in multiple sensitivity analyses. While the difference between EXAMINE and SAVOR-TIMI 53 with regard to heart failure outcomes may in part be attributable to lower statistical power in EXAMINE, the complete lack of adverse heart failure effects in a large trial like TECOS may indicate within-class differences between DPP-4 inhibitors. It is also possible that the contrasting results are due to differences in patient populations between the three trials, or simply to chance (statistics indicate probability, not certainty), but these are much less likely.

The ongoing Cardiovascular Outcome Study of Linagliptin Versus Glimepiride in Patients With Type 2 Diabetes (CAROLINA)18 and Cardiovascular and Renal Microvascular Outcome Study With Linagliptin in Patients With Type 2 Diabetes Mellitus (CARMELINA)19 trials, with estimated completion in 2018, may shed additional light on cardiovascular outcomes with DPP-4 inhibitors, and may help discriminate between class effects and individual drug effects with regard to heart failure and off-target adverse effects such as pancreatitis. For now, data from the TECOS trial support sitagliptin as the first drug of choice among DPP-4 inhibitors.

YOU ARE HERE: Home > Latest in Cardiology > The TECOS Trial of Sitagliptin vs. Placebo: Context and Cardiovascular Observations