Low-density lipoprotein cholesterol (LDL-C) is a causal risk factor for the development of atherosclerotic disease. Statin therapy reduces LDL-C and cardiovascular events in patients with or without cardiovascular disease. Previous studies have shown an increased incidence of diabetes with statin therapy.1 Additionally, high-dose statin therapy has been associated with a greater risk of new-onset diabetes compared with a moderate-intensity statin.2 In a large randomized trial of patients with recent acute coronary syndrome, ezetimibe, a non-statin lipid-lowering drug that decreases intestinal absorption of cholesterol, added to simvastatin showed a greater reduction in LDL-C and cardiovascular events than simvastatin alone.3 However, the effect of adding ezetimibe to a statin on the incidence of new-onset diabetes is unknown.

The Improved Reduction of Outcomes: Vytorin Efficacy International Trial (Thrombolysis in Myocardial Infarction 40) (IMPROVE-IT [TIMI 40]) investigators conducted a double-blind, randomized trial of 18,144 patients with acute coronary syndrome within 10 days of enrollment. The study included patients with LDL-C levels 50-100 mg/dL if already on lipid-lowering therapy and 50-125 mg/dL if not on lipid-lowering therapy. Study participants were randomized 1:1 to either a combination of simvastatin (40 mg) and ezetimibe (10 mg) or simvastatin (40 mg) and placebo. The primary endpoint was a composite of cardiovascular death, nonfatal myocardial infarction, unstable angina requiring rehospitalization, coronary revascularization (≥30 days after randomization), or nonfatal stroke.

Of the 12,254 patients who did not previously have diabetes, 1,414 (11.5%) developed diabetes during a mean follow-up of 75 months. There was no significant difference in the development of diabetes in patients treated with simvastatin/ezetimibe compared with simvastatin alone (hazard ratio, 1.04; 95% confidence interval, 0.94 to 1.15; P = 0.46) (Figure 1). Similar findings were observed when sensitivity analyses were performed using different definitions of new-onset diabetes. 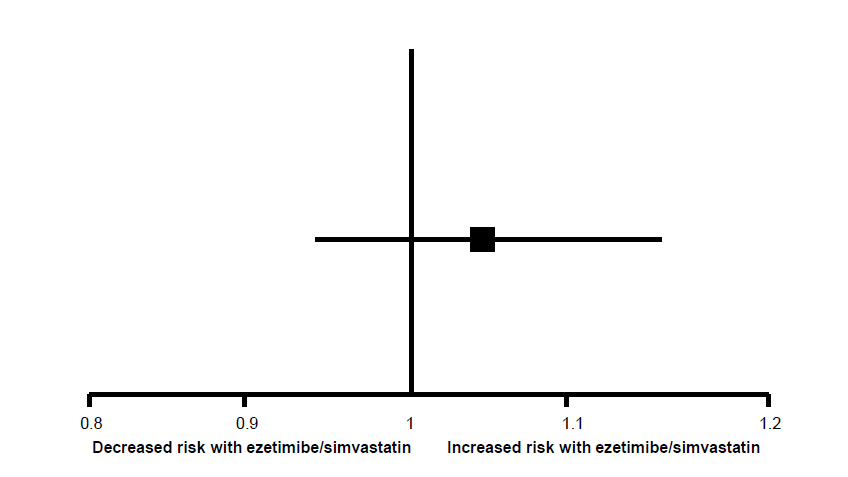 This figure shows the effect of ezetimibe on the incidence of new-onset diabetes in patients treated with simvastatin/ezetimibe compared to simvastatin monotherapy in the IMPROVE-IT trial (hazard ratio, 1.04; 95% confidence interval, 0.94 to 1.15; P = 0.46; n = 12,254).

When added to statin therapy, ezetimibe does not increase the risk of new-onset diabetes. Furthermore, this combination appears safe and more effective than statin monotherapy in reducing LDL-C and cardiovascular events.

Several primary and secondary prevention studies have shown that lowering LDL-C significantly reduces the risk of cardiovascular morbidity and mortality. Lifestyle changes and statins are the cornerstone for reducing LDL-C and cardiovascular risk in patients with hypercholesterolemia. However, several analyses have shown an increased risk of developing diabetes with statin use. Consequently, the U.S. Food and Drug Administration added a warning to the labeling of all statins. Nevertheless, the same studies also demonstrated that the small risk of developing diabetes with statin therapy was significantly outweighed by the substantial reduction in cardiovascular events.

Despite using intensive lipid-lowering therapy, a significant proportion of patients fail to achieve an optimal LDL-C level and maintain an elevated risk of cardiovascular events. In previous trials, adding a non-statin, lipid-lowering agent to a statin conferred no further benefit over statin monotherapy. IMPROVE-IT is the first randomized clinical trial to show improved cardiovascular outcomes by adding a non-statin lipid-lowering agent to statin therapy. This trial strengthens the hypothesis that a lower LDL-C level is better and suggests that this benefit is not limited to statins only.

Many clinicians will find the IMPROVE-IT data convincing and use ezetimibe in addition to a statin, targeting an LDL-C level less than 50 mg/dL in high-risk patients. This well-timed subgroup analysis of the IMPROVE-IT trial can reassure clinicians that ezetimibe is safe and does not increase the risk of developing diabetes. Previously, the effect of ezetimibe on the risk of incident diabetes had not been investigated in a large clinical trial. Earlier, small, non-randomized studies in patients with diabetes showed a decrease in fasting plasma glucose and reduced insulin resistance with ezetimibe, suggesting a favorable influence on glycemic control.5 Furthermore, another recent subgroup analysis of the IMPROVE-IT trial demonstrated greater relative and absolute benefit of ezetimibe added to simvastatin in diabetics, when compared with non-diabetic patients.6

Overall, this study reaffirms that ezetimibe is safe and does not increase the risk of developing diabetes. In addition, this trial reinforces the value of lowering LDL-C to even lower levels (<50 mg/dL), regardless of the agent used.

YOU ARE HERE: Home > Latest in Cardiology > Incidence of New-Onset Diabetes in the IMPROVE-IT Trial: Does Adding Ezetimibe to Simvastatin Increase Risk Compared to Simvastatin Alone?