As the utilization of non-vitamin K oral anticoagulants (NOACs) increases among patients with non-valvular atrial fibrillation, the management of bleeding episodes and emergent periprocedural risk reduction remains an important clinical challenge. This challenge is compounded by a lack of reliable and readily available laboratory means of monitoring the anticoagulant effect of NOACs. The management of such bleeding episodes is likely to evolve in light of the recent accelerated approval by the US Food and Drug Administration (FDA) of idarucizumab, with several other targeted antidotes currently in development. However, given the lack of clinical experience with these novel antidotes, their efficacy and safety profile in clinical practice remains to be seen.

Regardless of the NOAC administered, supportive measures remain first line in treating patients with bleeding complications, suspected over-anticoagulation, or in need of procedures (time and clinical stability permitting). Volume resuscitation and local hemostatic measures can be employed in such situations given the relatively short half-lives of these drugs, especially in patients with normal renal function.1-4 In patients presenting within two to six hours of a suspected overdose with either dabigatran or apixaban, the use of activated charcoal has been investigated as a reasonable measure.2,4-6 However, for patients in whom more emergent reversal is required, off-label use of several coagulation factor products have been investigated, including prothrombin complex concentrates (PCCs), recombinant factor VIIa (rFVIIa), and Factor Eight Inhibitor Bypassing Activity (FEIBA). Both three-factor PCCs (containing factors II, IX, and X) and four-factor PCCs (containing II, VII, IX, and X) are available for clinical use and have been investigated in small studies, with little data in bleeding patients. In light of unclear clinical efficacy of these coagulation products, and concerns regarding thrombotic risk when used outside of their approved indications, there is significant interest in the targeted reversal agents now in development. Initial safety and efficacy data suggest that these agents may provide an expedient and effective means of reversing the anticoagulant effect of the NOACs, and approval of these agents is therefore likely to improve the management of NOAC-related bleeding events.

PCCs have been shown to reverse laboratory measures and bleeding models of anticoagulation with the factor Xa inhibitors rivaroxaban, apixaban, and edoxaban in healthy volunteers,7-9 animal models,10,11 and in vitro studies of healthy donor blood.12 In a study of 35 healthy volunteers over-anticoagulated with rivaroxaban, three-factor PCC yielded greater reversal of rivaroxaban-induced changes in thrombin generation, while four-factor PCC provided a greater reduction in prothrombin time prolongation, suggesting that both formulations have potential efficacy for such purpose.13 One institution has instituted a protocol of administering four-factor PCC for patients with rivaroxaban- or apixaban-associated bleeding requiring emergent reversal based on the available data.14 However, whether this strategy results in clinical improvements for such patients has yet to be determined. In contrast to the factor Xa inhibitors, data for the use of PCCs for dabigatran-reversal is mixed, with one study of 10 healthy volunteers demonstrating an increase in endogenous thrombin potential after administration of low-dose four-factor PCC,7 while two other studies failed to show improvement in laboratory parameters in healthy volunteers.8,15

rFVIIa has been studied for use with both dabigatran and the factor Xa inhibitors as an agent of interest for its ability to activate factors X and IX. In small studies of healthy volunteers receiving dabigatran, rFVIIa resulted in improvement in laboratory parameters of dabigatran anticoagulation.7,15 In studies of the factor Xa inhibitors using animal models and healthy donor blood, rFVIIa similarly resulted in improvements in coagulation parameters.10,12,16 However, rFVIIa did not prevent expansion of intracerebral hematoma in a murine model of intracerebral hemorrhage on dabigatran.11 Further, an analysis of 35 clinical trials in which rFVIIa was utilized for off-label indications found a higher rate of arterial thromboembolic events as compared to placebo (5.5% vs 3.2%, p=0.003), an effect that was more pronounced in the elderly.17 This serves as a caution against using rFVIIa — as well as other coagulation products — to reverse the anticoagulant effects of the NOACs, given uncertain benefit in clinical practice and potential for thrombotic risk.

FEIBA is thought to provide the combined effects of PCC and rFVIIa, containing factors II, IX, X, and activated VII. On the basis of data from healthy volunteers showing an increase in endogenous thrombin potential with low doses of FEIBA and correction of lag time with high doses, one institution has recommended FEIBA as the preferred coagulation product for use in dabigatran-associated bleeding.7,14 However, another institution recommends utilization of 4-factor PCC over rFVIIa or FEIBA for both dabigatran and the factor Xa inhibitors, highlighting the uncertainty regarding recommendations on the optimal means of reversal given the lack of clinical data on the utilization of these coagulation products.18 For factor Xa inhibitors, small studies also suggest improvement in various laboratory parameters with FEIBA for rivaroxaban and edoxaban anticoagulation.7,16,19

In light of the uncertain clinical benefit of current coagulation products for reversal of NOACs, several targeted antidotes are in development with the promise of filling this unmet clinical need. Idarucizumab is the first of these agents to be approved by the FDA for use in life-threatening bleeding or need for emergent procedures in patients on dabigatran. In an interim analysis of the phase III Reversal Effects of Idarucizumab on Active Dabigatran (RE-VERSE AD) study, 88-98% of patients presenting with uncontrolled bleeding or need for emergent procedures on dabigatran who received a single dose of this humanized antibody fragment experienced normalization of laboratory parameters, as determined by the diluted thrombin time and ecarin clotting time, with only one reported thrombotic event within the first 72 hours.20 These effects were apparent within minutes of drug administration and persisted at 24 hours as determined by measurements of unbound dabigatran, which remained < 20 ng/mL in 79% of patients. Of note, however, the study did not include a placebo arm and thus the benefit of administering idarucizumab above supportive measures remains unclear.

Regarding potential antidotes for factor Xa inhibitors, promising results from the ANNEXA-A and ANNEXA-R studies investigating the use of this inactive recombinant modified human factor Xa protein were recently published. This placebo-controlled study investigated bolus versus bolus plus infusion of andexanet alfa in healthy volunteers aged 50 to 70 receiving standard doses of apixaban and rivaroxaban, and found that apixaban-treated patients experienced a 94% reduction in anti-factor Xa activity (as compared to a 21% reduction in patients receiving placebo, p<0.001) and that rivaroxaban-treated patients experienced a 92% reduction (as compared to 18% of placebo-treated patients, p<0.001) without any serious adverse or thrombotic events.21 With these laboratory data in healthy individuals, a phase IIIb-IV study is now ongoing to investigate the use of andexanet alfa in patients presenting with acute bleeding (ClinicalTrials.gov number, NCT02329327). Finally, a synthetic small molecule designed to reverse the effect of both factor Xa and IIa inhibitors is also in development. PER977 (aripazine) decreased whole-blood clotting times nearly to baseline within ten minutes of administration in a study of healthy volunteers given edoxaban, with a phase II study now underway (ClinicalTrials.gov number, NCT02207257).22

While the development of targeted reversal agents holds promise for significantly improving the clinical management of major bleeding on NOACs, significant clinical uncertainty regarding the optimal management of these events remains. With the presently available coagulation products, a lack of clinical data regarding efficacy and safety leaves clinicians uncertain as to which product to choose, and whether their utilization will effectively reverse anticoagulation without increasing the risk of thrombosis. Further, the lack of reliable and routinely available laboratory means of monitoring the anticoagulant effect of NOACs compounds the uncertainty regarding the efficacy of any reversal product. Figure 1 presents a potential strategy for management of bleeding events, though this is likely to change in the near future as our understanding of the role of targeted reversal agents improves. First line therapy remains supportive care when time permits. If more urgent drug removal is required, hemodialysis can remove up to 57-68% of dabigatran within four hours and has been described in case reports.23,24 While use of hemodialysis to remove edoxaban has not been extensively studied, only 20% of the drug can be removed by this modality.25 Given their high degree of protein binding, dialysis is unlikely to result in drug removal of either rivaroxaban or apixaban.26,27 Furthermore, in the urgent setting there are logistical challenges to this approach in patients without access for hemodialysis presenting with over-anticoagulation. Thus, when pharmacologic therapy is desired, one institution has recommended a protocol of utilizing FEIBA for dabigatran and four-factor PCC for rivaroxaban or apixaban, though the data to support the clinical efficacy of this strategy are lacking.14 The development of targeted reversal agents holds promise for offering a more definitive means of managing bleeding events on NOACs, though trials of their use in this population are still ongoing, and their role in clinical practice remains to be seen. However, the emerging data suggest that these targeted reversal agents will enable the development of clearer treatment algorithms, which are currently lacking in clinical care. 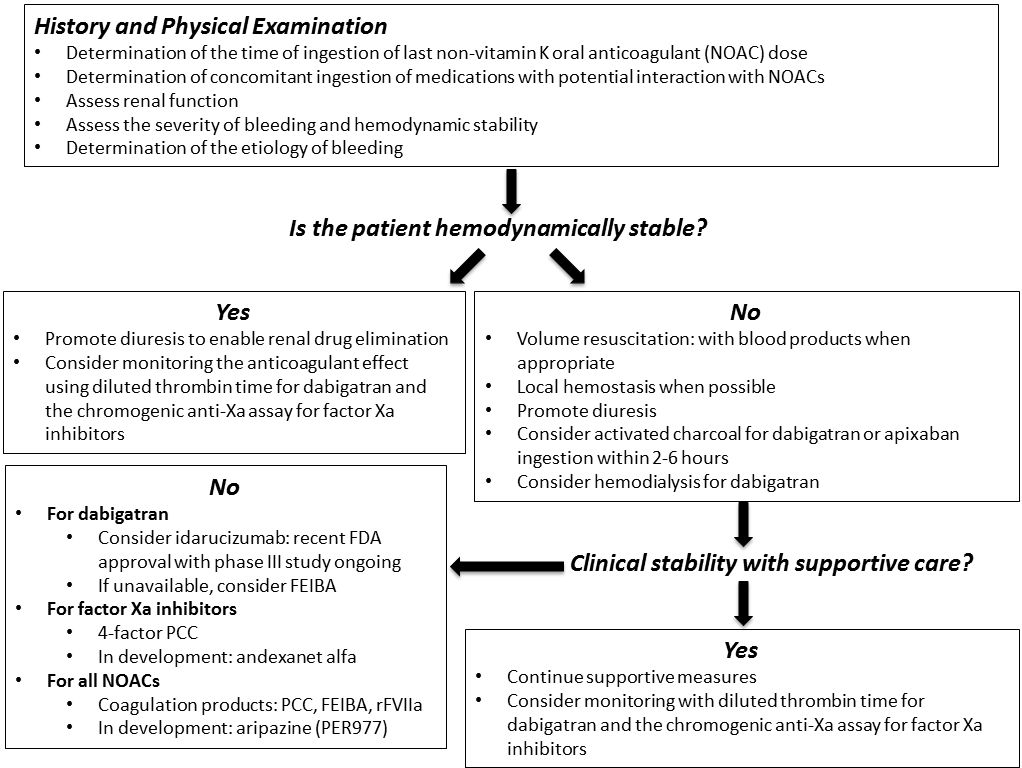 YOU ARE HERE: Home > Latest in Cardiology > Update on Reversal Agents for Novel Oral Anticoagulants