Radiation safety is the concern of all health care providers who perform procedures associated with radiation imaging, whether for diagnostic purposes or therapeutic procedures. Appropriately, there has been increasing public and societal interest in limiting patient radiation. Likewise, laboratory personnel are at risk for radiation compounded by long procedures and multiyear careers using radiation procedures.

Over the years, there have been various equipment modifications. The initial focus was to improve image quality by increasing radiation intensity. However, there is now a greater focus on limiting patient exposure in the setting of often prolonged procedures, such as complex multivessel and chronic total occlusion (CTO) revascularization procedures. X-ray systems are able to provide excellent image quality with lower X-ray exposure.

However, despite these improvements, radiation remains a risk for procedure personnel. Unfortunately, the focus on the complexity and intensity of the procedure itself often overshadows attention to personal optimal "self-radiation" protection. The following article not only describes these risks but also, importantly, enumerates the specific operator and personnel approaches to minimize radiation risk. A review of these preventive strategies is important to re-emphasize the personnel opportunities and responsibilities for radiation protection. Finally, the authors describe some of the evolving opportunities to more dramatically reduce radiation exposure. This article is an excellent refocus on an important issue for the interventional community.

Significant radiation exposure has the potential to impact the health and well-being of interventional cardiologists in the following ways:

The adverse risks of radiation exposure may be described in terms of stochastic and deterministic effects.

The stochastic effect is the non-threshold biologic effect of radiation that occurs by chance to a population of persons whose probability is proportional to the dose and whose severity is independent of the dose. Developing malignancy due to radiation exposure is a stochastic risk.

Dose exposure is usually described in terms of the following parameters:

The annual occupational dose limits for catheterization laboratory personnel are as follows:

Notification levels are intended to make the operator aware, during the procedure, of the cumulative radiation used. This happens at 3 Gy. The substantial radiation dose level is a trigger level for certain processes and follow-up measures and happens at 5 Gy. It is not an indicator of a tissue reaction or a predictor of the risk of a stochastic effect but is intended to alert providers to the possibility of a tissue reaction. The following process should be followed when a substantial radiation dose level is reached:

This is enshrined in the "as low as reasonably achievable" (ALARA) principle. The level of protection should be the best under the prevailing circumstances, maximizing the margin of benefit over harm. Imaging requirements depend on the specific patient and the specific procedure. Although better-than-adequate image quality subjects the patient to additional radiation dose without additional clinical benefit, reducing patient radiation dose to the point at which images are inadequate is counterproductive and results in radiation dose to the patient without any clinical benefit.17 Using an anthropomorphic phantom, significant differences were identified between different manufacturers in terms of radiation doses in comparable views.18

Commonly employed strategies to minimize radiation exposure are summarized below and also in Figures 1 and 2.19 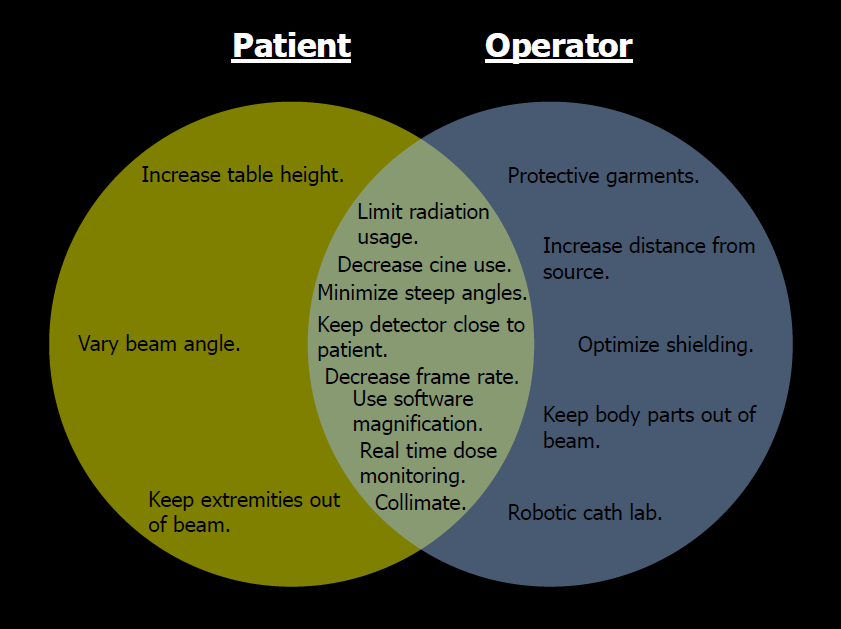 Precautions to Minimize Exposure to Patient and Operator

A radiation safety program is an essential part of the quality administration for the catheterization laboratory. This should be a collaborative effort involving physicians, staff, medical or health physicists, quality assurance personnel, and hospital administration. Interventional cardiologists are an essential part of this process and need to ensure the best possible outcomes for ourselves and for our patients.

As a profession, interventional cardiologists need to be conscious of their own radiation safety. Improved wall hanging or floor-mounted personal shielding and robotic cardiac catheterization laboratories need to become a standard of care and not a luxury. The high prevalence of orthopedic issues among catheterization laboratory professionals and subsequent disability should prompt governmental oversight agencies like the Occupational Safety and Health Administration to mandate these types of procedures and equipment. We need to continue pursuing research and development of customized radiation safety equipment for peripheral interventions and structural procedures.

YOU ARE HERE: Home > Latest in Cardiology > Radiation Safety for the Interventional Cardiologist—A Practical Approach to Protecting Ourselves From the Dangers of Ionizing Radiation