Drug-Coated Balloons for Lower Extremity Interventions: Why, When, and in Whom?

Lower extremity peripheral artery disease (PAD) affects 5-18% of the population, which equates to more than 8 million people in the United States and over 202 million people globally, with a predicted global increase in the prevalence of PAD as atherosclerotic risk factors become more prevalent, the population ages, and the treatments for chronic diseases become more sophisticated.1-3 Lower extremity PAD represents a continuum of disease with the most dreaded complication being disability, amputation and death. Of all nontraumatic amputations, 70-80% occur in patients with diabetes. Globally, it is estimated that 1 million limb amputations are performed annually on patients with diabetes; this equates to one limb being amputated from a person with diabetes every 30 seconds somewhere in the world.4 Such statistics have provided the impetus for continued innovation, technical creativity, and professional commitment to alleviate the suffering of patients and prevent unnecessary amputations.

The past decade has welcomed a greater understanding of PAD, the continued refinement of endovascular techniques, and the evolution of technology with the associated vicissitude of new angioplasty balloons, stent designs, and delivery systems for the revascularization of patients with PAD.5 The advancements in catheter-based technologies and the accretion of advanced antegrade, brachial, tibial, pedal, and digital access have greatly increased the treatment options for patients with peripheral vascular disease and have led to the attendant growth in the number of endovascular procedures performed annually in the United States.6 Despite enhanced immediate technical success, neointimal hyperplasia, stent fracture, and restenosis remain the Achilles heel of endovascular interventions.7,8

Drug-coated balloons (DCBs) have been a welcome addition to the endovascular specialist's armamentarium. Thus far, studies have shown favorable outcomes with an excellent safety profile, a significant reduction in the rate of restenosis, a decrease in target vessel revascularization, and a potential economic cost savings due to the reduced need for repeat peripheral angiograms and reintervention when compared to plain old balloon angioplasty (POBA).9-12 DCBs provide a novel method of short-term, nonpolymeric local delivery of paclitaxel into the arterial wall without the need for a chronically implanted scaffold. This "stent-less" technology remains the desired approach for the treatment of disease in the superficial femoral artery and/or popliteal artery space given the biomechanics of this region and predilection to stent fracture and occlusion.

In Europe, several DCBs are in development and approved for clinical use. Over the past year, two DCBs, the Lutonix 035 DCB PTA Catheter with paclitaxel and the IN.PACT Admiral DCB with paclitaxel, have been approved by the United States Food and Drug Administration for the treatment of PAD in the superficial femoral artery and popliteal artery. All DCBs currently utilize paclitaxel in combination with a different carrier and excipient, which affects the transfer of paclitaxel to the vessel wall, pharmacokinetic profile of each available DCB, and the degree of drug loss during balloon handling and insertion. The Lutonix DCB utilizes a polysorbate, sorbitol, methanol excipient and a paclitaxel dose of 2 mcg/mm2. The IN.PACT Admiral DCB, in contrast, utilizes urea as the excipient and a paclitaxel dose of 3.5 mcg/mm2.13

The Lutonix Paclitaxel-Coated Balloon for the Prevention of Femoropopliteal Restenosis 2 (LEVANT 2) trial and Drug-Coated Balloon Versus Standard Percutaneous Transluminal Angioplasty for the Treatment of Superficial Femoral and/or Popliteal Peripheral Artery Disease (IN.PACT SFA), and the Randomized Trial of IN.PACT Admiral Drug Coated Balloon vs Standard PTA for the Treatment of SFA and Proximal Popliteal Arterial Disease (IN.PACT SFA II) studies are pivotal trials in the endovascular world as they have demonstrated the superior primary patency and noninferior safety of DCBs compared to standard angioplasty balloons for treatment of symptomatic femoropopliteal disease. The LEVANT 2 study, a prospective, single-blind, randomized, 54-site study, compared the Lutonix 035 DCB with standard percutaneous transluminal angioplasty (PTA) in patients with intermittent claudication or ischemic rest pain and angiographically significant atherosclerotic lesions. In the LEVANT 2 study, the primary efficacy endpoint was primary patency of the target lesion at 12 months. Primary patency was defined as freedom from binary restenosis or from the need for target-lesion revascularization. Treatment with the Lutonix 035 DCB resulted in a statistically significant higher rate of primary patency at 12 months (65.2% vs. 52.6%, P = 0.02) compared to PTA with a standard balloon. In addition, the Lutonix 035 DCB was found to be noninferior to the standard PTA balloon with regards to safety endpoints.14 At 24 months, the primary patency dropped to 58.6% for patients treated with the Lutonix 035 DCB but the primary patency was still superior to standard PTA (58.6% vs. 53% [P = 0.05]).

The IN.PACT SFA trial is a prospective, single-blind, multicenter, randomized trial designed to assess the efficacy and safety of the IN.PACT Admiral DCB with paclitaxel versus standard balloon angioplasty in patients with intermittent claudication or ischemic rest pain due to SFA and/or proximal popliteal artery disease. The primary efficacy endpoint was primary patency defined as freedom from restenosis or clinically-driven target vessel revascularization at 12 months. The IN.PACT Admiral DCB resulted in higher primary patency versus PTA (82.2% vs. 52.4%; P < 0.001) and a lower rate of clinically-driven target lesion revascularization (2.4% vs. 20.6% ; P < 0.001) at 12 months.15 At 24 months, patients treated with the IN.PACT Admiral DCB continued to have sustained and durable primary patency compared to the PTA arm (78.9% vs 50.1%; P < 0.001) and the rate of clinically-driven target vessel revascularization were 9.1% versus 28.3% for the DCB versus PTA (P < 0.001), respectively.11

DCBs are promising weapons for a disease process, a battle, that has proven difficult to win, but we await guidance on how to best utilize them in our patient population. The LEVANT 2 and IN.PACT trials excluded patients with long femoropopliteal lesions, severely calcified lesions, patients with renal disease, and those with critical limb ischemia (Rutherford 5 and 6), which comprises a large percentage of the patients we see as endovascular specialists in our clinical practice.11,15,16 Figure 1 shows a digital subtraction angiogram of a patient that presented with bilateral, lifestyle-limiting claudication. This is very representative of the patients who we see. 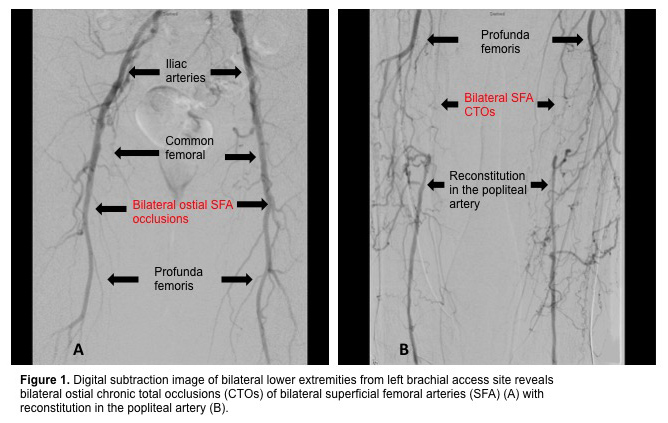 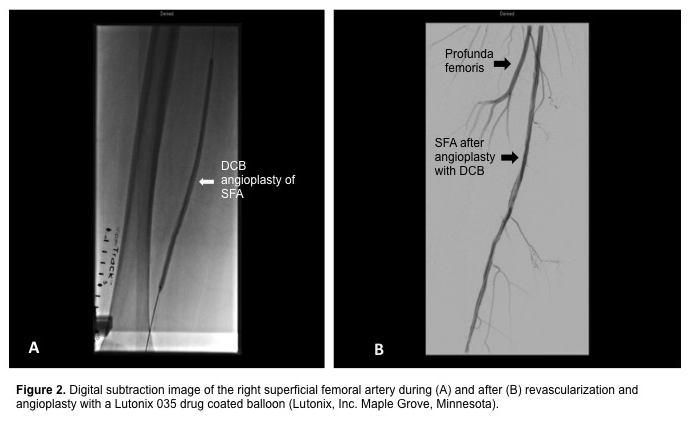 Excellent angiographic results were obtained, and symptomatic improvement of right calf claudication was achieved. The patient later returned for revascularization of the left SFA CTO, and she remains asymptomatic 9 months post intervention.

Drug-coated therapies are predicted to revolutionize endovascular therapy; however, unanswered questions remain. There is ongoing research to improve balloon coating technology. Ongoing clinical trials are evaluating the use of DCBs in other vascular spaces, such as procedures below the knee, the long-term outcomes of DCB therapy, and a need for trials to inform us about the efficacy of DCBs in the treatment of in-stent restenosis and longer femoropopliteal lesions. The endovascular community also awaits a head–to-head comparison of the efficacy and safety of DCBs compared to each other and specific guidance on how to best integrate DCBs into clinical practice.

YOU ARE HERE: Home > Latest in Cardiology > Drug-Coated Balloons for Lower Extremity Interventions: Why, When, and in Whom?