Routine Use of Transesophageal Echocardiography in TAVR: CON

Editor's Note: This is Part II (CON) of a two-part Expert Analysis. Go to Part I (PRO).

The routine use of transesophageal echocardiography (TEE) in transcatheter aortic valve replacement (TAVR) is a medical practice whose time has come and gone. At one time (circa 2010), it was the right thing to do.

This core of this debate is really whether the routine use of TEE is at all beneficial and, if so, at what additional cost. First we will dispense with the obvious. The use of TEE for select TAVR cases is not being contested because there is a wealth of compelling data and real world experience clearly describing the role of TEE to identify complications,1,2 to identify and quantify paravalvular regurgitation,3 and to provide highly accurate measurements of aortic root geometry when contrast computed tomography imaging is to be avoided.4

To discuss the routine use of TEE during TAVR, we must emphasize that this decision is largely dependent upon the form of anesthesia given to the patient. Clearly, general anesthetic facilitates esophageal intubation; however, use of local anesthetic would make it difficult to keep a TEE probe in place for procedures that can exceed an hour. As such, the use of TEE tends to equate to tracheal intubation with general anesthesia.

So let's look at the data trends for the use of general or local anesthesia during TAVR. Like most developments within the TAVR experience, the trends in Europe generally precede those in North America, and the trends in Europe are clear on this matter. A recent paper by Dall'Ara et al. clearly delineates that the anesthesia practices within Europe are evolving with a clear tendency to perform less general anesthesia and more local anesthesia in TAVR patients. Using the Sentinel European TAVI Pilot Registry, they looked at 2,807 patients treated with TAVR using a transfemoral approach and found that even over a short period of 2 years (2011 to 2012), the use of local anesthesia increased from 38% to 57%.5 Did this rapid change in procedure practice have an impact on important clinical outcomes after TAVR? The answer is no. The rates of myocardial infarction, major stroke, or in-hospital death were unchanged, thus suggesting that there is not a compelling reason to continue the practice of deep sedation (with TEE) for planned TAVR procedures.

Oguri et al. recently reported on the French CoreValve and Edwards 2 TAVR Registry looking at 2,326 patients who underwent transfemoral TAVR.6 The clinical outcomes for those patients who received the general anesthetic versus a local anesthetic were compared. Not surprisingly, the use of TEE guidance was more common in the general anesthetic group (73% vs. 17%); however, device success and cumulative 30-day mortality rates were not different between the groups. Although the initial evaluation did show that there was a greater incidence of postprocedural aortic regurgitation (>mild) in the group without TEE (19.1% vs. 15%), when the data were evaluated with propensity matching of patient characteristics there was no longer any significant difference in the outcome of aortic regurgitation (>mild). Again, these data suggest that general anesthesia with TEE may not be needed to ensure best outcomes after TAVR.

Data are now emerging from US medical centers that mirror the trend in Europe. Jensen et al. report a "minimalistic" TAVR strategy employed at Emory University between 2012 and 2014.7 The university is a high volume site that has performed over 300 TAVRs. The authors describe an approach using transfemoral access with conscious sedation and transthoracic echocardiography (TTE) only. When they compared this minimalist strategy to their own historical controls (involving a hybrid room, general anesthesia, and routine TEE), they found that the minimalist approach was not only feasible but was also associated with very similar clinical outcomes. Their report demonstrated that at experienced centers (which have gone beyond their initial learning curve), the use of local anesthesia in a selected patient population can be associated with good clinical outcomes.

So there is clearly a trend in both Europe and the United States to combine TTE with local anesthesia for the majority of patients undergoing transfemoral TAVR procedures. With current generation TAVR devices (with progressively smaller delivery systems), there is also a trend to an increased proportion of transfemoral as opposed to transapical and direct aortic procedures. At our center, we now perform roughly 90% of our TAVR procedures using transfemoral access, and 90% of those cases are performed using only local anesthesia, fluoroscopy, and TTE.

Although there is not yet a randomized study looking at the incremental benefit of TEE over no TEE during TAVR, there is a compelling accumulation of registry and single site experience suggesting that the routine use of general anesthetic with TEE is not warranted. Petronio et al. recently reported on the Italian CoreValve Registry in a retrospective comparison of patients who received general anesthetic (27%) or local anesthetic (73%) with the CoreValve system.8 The two groups showed similar device success with no significant difference in mortality, stroke, or myocardial infarction. The local anesthetic group had a significantly shorter length of hospital stay, and the general anesthetic group predictably had longer procedural time, higher use of surgical vascular access, and higher rate of both bleeding and major vascular site complications. However, this was not a randomized evaluation of the anesthetic strategies, so there may be considerable bias inherent in this retrospective study. That being noted, the data do indicate that general anesthesia with TEE is associated with longer and more expensive hospital stays.

So what are the real risks of not having routine TEE during TAVR? Is there an increased risk of unrecognized complications? Is there a justified concern that paravalvular regurgitation will either be underestimated or missed entirely? In concept, these are real concerns. But in practice, there are not enough data to support the position that the routine use of TEE leads to improved clinical outcomes.

Babaliaros et al. recently reported on the single site experience using the Edwards SAPIEN valve comparing minimalist transfemoral TAVR versus hybrid operating room with general anesthetic TAVR approaches.9 TAVR was performed in the catheterization laboratory with a sonographer performing TTE and an attending imaging cardiologist present to aid with the placement and postdeployment functional evaluation of the transcatheter deployed heart valve. The standard approach was performed in a hybrid operating room with endotracheal intubation, general anesthesia, and TEE. The report compared 70 patients who had the minimal access approach with 72 patients who had standard approach (as historical controls). Mortality at 30 days was not different between groups nor was the 30-day stroke or transient ischemic attack rate. The incidence of moderate or severe paravalvular regurgitation was exactly the same at 30 days, and there was no significant difference in survival between implant strategies after a year of follow up (Figure 1). In addition, the minimal access strategy was associated with significant cost reduction (Figure 2). So there is clearly a growing data set suggesting that hemodynamically significant aortic regurgitation is not being systematically missed when TEE is not employed during TAVR. 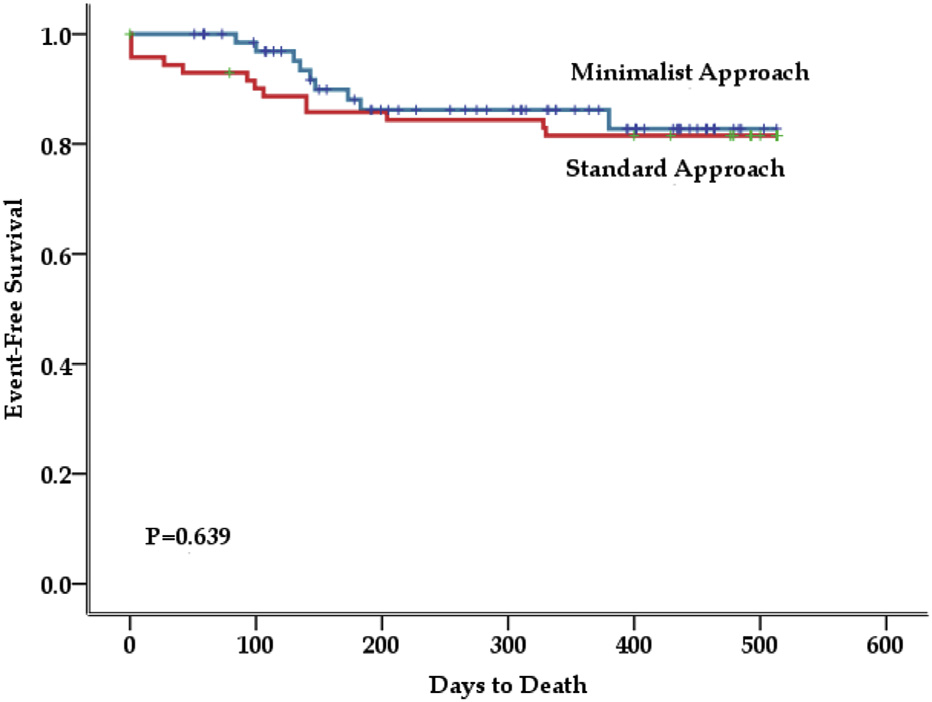 Figure 1: Kaplan-Meier Survival Analysis of the Treatment Approach in Relation to the Outcome of Death. Adapted from Babaliaros et al. J Am Coll Cardiol Intv 2014;7:898–904.

And finally, an important study by Attizzani and colleagues does directly assess the impact of adjunctive TEE compared to angiographic guidance alone during TAVR.10 This study is a report from nine Italian TAVR centers using the CoreValve system from September 2007 to March 2014. A total of 625 patients (256 employing TEE with angiography and 369 employing angiography alone) were reported. As expected, a significantly greater proportion of the patients undergoing TEE also had general anesthesia. The principal message from this study was that 80% of the patients had mild or less aortic regurgitation and that there was no difference in the frequency of the diagnosis of an aortic regurgitation irrespective of whether TEE was employed. There was no difference in the incidence of postdilatation after valve implant and, most importantly, there was no difference in the rates of death, cardiovascular death, stroke, or transient ischemic attack at 12-month follow up. This study is one of the very few that directly addresses the question of the incremental benefit of routine use of TEE. The message from this study is that as long as comprehensive imaging and preprocedural planning is performed, angiographic imaging and TTE is all that is required at the time of valve implantation.

In 2016, there is a clear trend toward minimalist TAVR and likely a movement of TAVR out of hybrid operating rooms and into catheterization laboratories. Without question, patients undergoing TAVR are still at risk for procedural complications, and as such an anesthesiologist should remain part of the TAVR team. When the planning computed tomography predicts complications, or if a routine procedure suddenly becomes complicated, then TEE continues to play a vital role. But when an experienced TAVR center decides to transition from routine TEE to as needed TEE, two important results can be expected: 1) periprocedural cost reduction will occur, and 2) acute procedural success and long-term patient outcomes will not be jeopardized.

YOU ARE HERE: Home > Latest in Cardiology > Routine Use of Transesophageal Echocardiography in TAVR: CON