Cardiac magnetic resonance (CMR) has an ever-increasing role in the assessment and management of patients with coronary artery disease (CAD). Advantages of CMR include the lack of ionizing radiation and its flexibility, high spatial resolution, and three-dimensional capabilities that enable imaging in any desired plane. Complete evaluation of myocardial structure and function, perfusion, tissue characteristics, and viability can be performed in a single study of 35-40 minutes. Disadvantages include concerns regarding the use of gadolinium-based contrast agents in patients with class 4 or 5 chronic kidney disease due to the potential of nephrogenic systemic fibrosis, as well as the inability to image most patients with pacemakers or implantable cardioverter-defibrillators due to safety concerns. However, MRI-compatible devices are now being developed and implanted, and performing CMR in these patients and in patients with noncompatible devices, under the right conditions, is becoming more feasible.

CMR is primarily used in the setting of chronic CAD for the evaluation of myocardial ischemia and viability.1 There are two principal CMR techniques used for the evaluation of ischemia. Dobutamine stress functional CMR is quite accurate in the assessment of ischemia2 but is used less often clinically due to the utility of gadolinium in the assessment of both ischemia and viability within the same study as well as the improved efficiency of stress testing with vasodilators compared with dobutamine. Thus, the most commonly used stress modality is vasodilator first-pass contrast-enhanced perfusion CMR. Head-to-head comparisons of vasodilator stress perfusion CMR and dobutamine stress CMR suggest a higher sensitivity for contrast-enhanced perfusion imaging and higher specificity for dobutamine wall motion imaging. Based on multimodality appropriate use criteria, stress CMR is considered appropriate for patients with high pretest probability for CAD or intermediate pretest probability of CAD with an uninterpretable electrocardiogram (ECG) or inability to exercise.3 It is also appropriate for patients with an abnormal ECG who are intermediate to high risk as well as those with an abnormal or uncertain exercise ECG or those with obstructive CAD of uncertain significance noted on computed tomography or invasive coronary angiography.3

Most perfusion stress testing is performed at 1.5T, although there are data to suggest that the higher spatial resolution available at 3T improves overall accuracy. Typically, the first pass of gadolinium is tracked qualitatively through the myocardium in at least three short-axis slices during the infusion of either adenosine or regadenoson and then again at rest, both times during a prolonged breath hold (Figure 1). Rest imaging and late gadolinium enhancement (LGE) are performed to exclude artifacts and infarction, respectively, as the causes of any visual defect. This approach has been well validated against fractional flow reserve as a gold standard in the catheterization laboratory.4 In combination with LGE as a marker of prior infarction, CMR was shown to be more accurate than single-photon emission computed tomography when compared head-to-head in a single-center study of 752 patients using x-ray angiography as the gold standard.5 A multicenter study of magnetic resonance perfusion-guided therapy as compared with fractional flow reserve in the catheterization laboratory is presently underway and will be reported soon.6 A meta-analysis reviewing the diagnostic performance of stress perfusion CMR demonstrated a sensitivity of 89%, specificity of 76%, and a diagnostic odds ratio of a positive study of 26.4 (95% confidence interval: 17.7-39.5).7 Absolute quantitation of myocardial blood flow can be performed with deconvolution techniques, which improve the identification of the extent of myocardial ischemia but is not necessarily more accurate in diagnosing CAD on a per-patient basis. 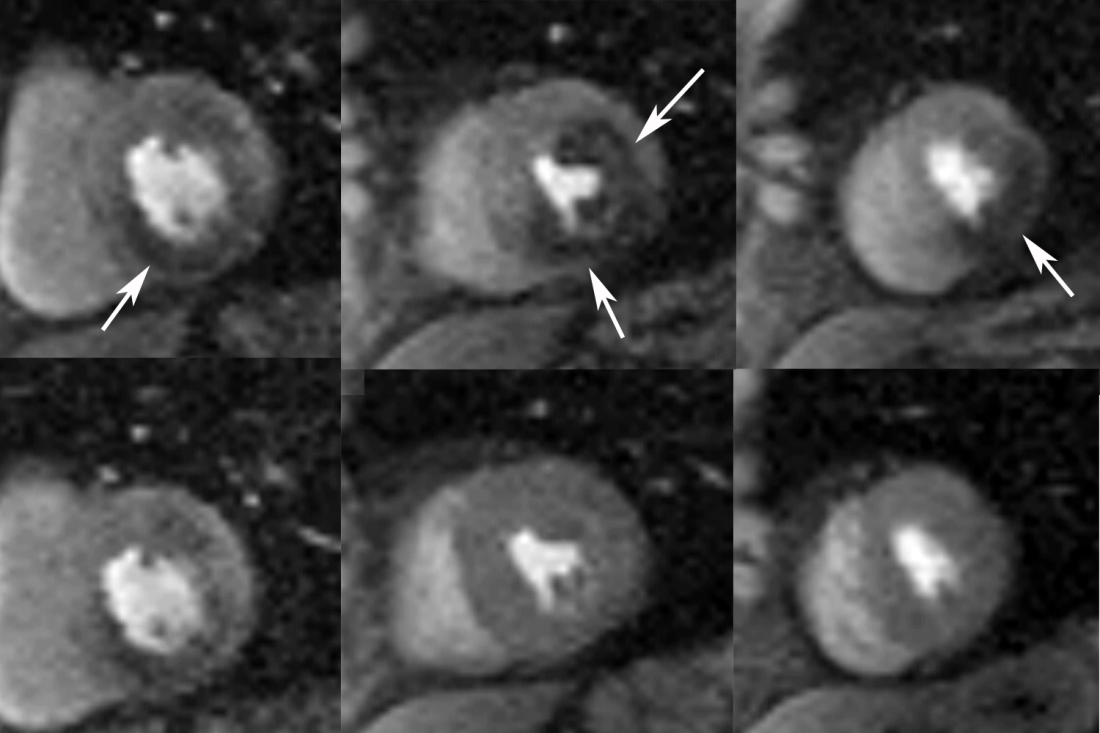 Figure 1. This figure shows first-pass contrast-enhanced perfusion images during adenosine stress (top) and at rest (bottom) in three short axis slices from base (left) to apex (right). There is extensive stress-induced ischemia (arrows) in the basal inferior wall, midinferior and anterolateral walls, and apical lateral wall. Rest perfusion is normal.

Magnetic resonance ischemia testing also offers the ability to assess prognosis in an individual patient. A study of 513 patients who underwent both dobutamine stress functional and adenosine stress perfusion studies demonstrated incremental value of stress testing over clinical risk factors and resting wall motion abnormalities. Patients with normal studies had a 3 year event-free survival of 99.2%. A recent meta-analysis of 19 studies and 111,636 patients with a mean follow-up of 32 months showed that patients with ischemia on a stress magnetic resonance study had a 7.7-fold increased incidence of myocardial infarction and a 7-fold increased risk for cardiovascular death compared with those without ischemia.8 A similar analysis of 12,178 patients showed that the annualized event rate after a negative CMR stress test was 1%.9

CMR has evolved into a gold-standard technique for the assessment of myocardial viability in patients with CAD with the technique called LGE.10 It came of age at the turn of the millennium with the development of a pulse sequence that allowed nulling of normal myocardium and demonstrated bright signal in infarcted myocardium when imaged 10-20 minutes after infusion of gadolinium. Fibrotic areas appear bright due to increased volume of distribution of gadolinium as well as delayed washout of the contrast agent (Figure 2). In patients with CAD prior to revascularization, evaluation of the transmural extent of LGE enables prediction of recovery of function with revascularization. There is an inverse relationship between the transmurality of infarction and the likelihood of functional recovery such that segments with >75% transmural LGE have little likelihood of recovery. In a meta-analysis of 24 studies and 698 patients, LGE demonstrated the highest sensitivity and negative predictive value for predicting improved function (95% and 90%, respectively) whereas the contractile response to low-dose dobutamine as an alternative approach demonstrated the highest specificity and positive predictive value (91% and 92%, respectively).11 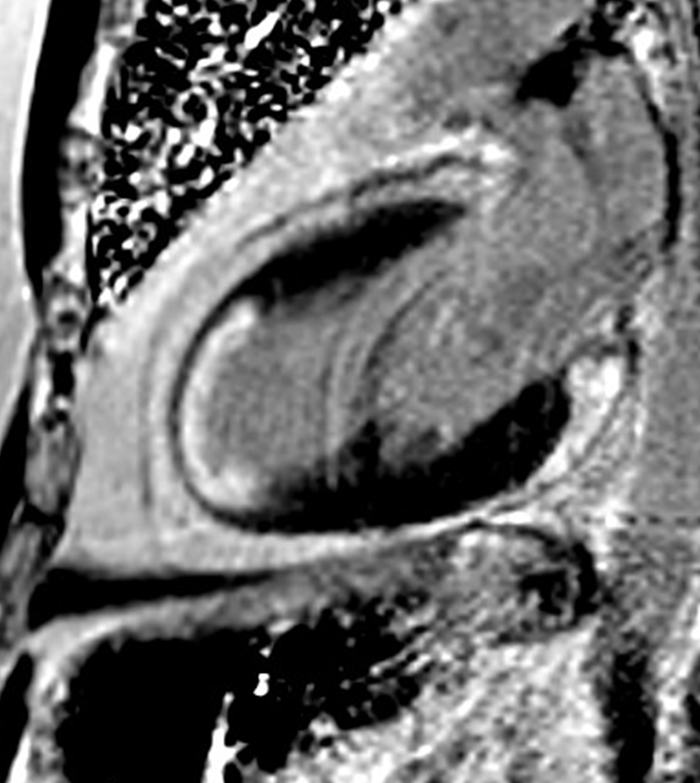 Figure 2. This figure shows a two-chamber long-axis phase-sensitive inversion-recovery image obtained 15 minutes after infusion of gadolinium. There is a 75% transmural region of late gadolinium enhancement in the anteroapical wall consistent with nonviable myocardium.

YOU ARE HERE: Home > Latest in Cardiology > The Role of CMR in the Assessment and Prognosis of Patients With Stable CAD