Life expectancy has increased in the United States over the past several decades, resulting in a substantial rise in individuals over the age of 90 years from 720,000 in 1980 to 1.9 million in 2010.1 It is estimated that by 2050 the US population aged 90 years or above will quadruple to 8.7 million.2 The prevalence of aortic stenosis (AS) increases with age and has been noted in 2.8% of patients age 75 years or more in the US.3 Nonagenarians frequently have more severe comorbidities and have a higher degree of frailty as compared to younger patients with AS.4 Surgical aortic valve replacement can be performed effectively in elderly patients,5, 6 although the perioperative mortality increases with age from 1.3% in patients younger than 70 years to 5% at age 85, and 10% in patients 90 years or older.7 Additionally, improvement in functional capacity and quality of life may be even more important in this unique patient population with limited life expectancy. Transcatheter aortic valve replacement (TAVR) offers a viable minimally invasive option for treatment of AS in these patients who are considered high surgical risk or inoperable. However, data on clinical, functional and quality of life outcomes of TAVR in nonagenarians are currently limited as most of these patients form a relatively small proportion of patients in TAVR trials. Recently published studies have explored the outcomes in patients with AS who are 90 years or older.8-12 The authors of this expert analysis aim to briefly review the results of these studies and evaluate the safety and efficacy of TAVR in nonagenarians.

Investigators from the Placement of Aortic Transcatheter Valve (PARTNER) trial reported the largest experience of TAVR in nonagenarians with 531 patients (mean age 93 ± 2.1 years) undergoing TAVR [Transfemoral (TF-TAVR) 329 patients, Transapical (TA-TAVR)– 202 patients].8 Clinical, echocardiographic and quality of life outcomes up to one year were reported in the study, and time-varying all-cause mortality was compared to an age-, sex- and race-matched US cohort. Overall, nonagenarians undergoing TF-TAVR had a 30-day mortality of 4.0% and three-year mortality of 48% (44% in the matched population). The 30-day post-procedure stroke risk was 3.6%, paravalvular leak greater than moderate was 1.4%, and median length of stay was five days. Quality of life measures as reported using the Kansas City Cardiomyopathy Questionnaire (KCCQ) overall summary score improved significantly from 43 ± 22 at baseline to 72 ± 21 at 6 months. Compared to patients undergoing TF-TAVR, those undergoing TA-TAVR had a three-fold higher 30-day mortality of 12%, with comparable three-year mortality. The outcomes were comparable to the overall patient cohort in the PARTNER A trial, which showed a 30-day all-cause mortality of 3.5%, three-year all-cause mortality of 44.2% and major stroke rate of 3.8% at 30 days. The investigators concluded that TAVR in nonagenarians is an acceptable treatment modality with comparable mortality to a matched US population sample after the initial post-operative period, with significant improvements in quality of life.

Mack et al recently reported on their experience in treating patients with severe AS aged 90 years or older with TAVR (90 patients) and SAVR (20 patients) at two medical centers in Dallas.10 The mean age of the patients was 91.85 ± 1.8 years with an average STS PROM score of 11.11 ± 5.74%. Interestingly, frailty evaluations were done in 83 patients of these patients using four common metrics (serum albumin < 3.5 mg/dl, gait speed, Katz activities of daily living score and grip strength), and 78% (65/83) patients failed at least two of four frailty tests. 30-day mortality was noted to be 10.9% (11.1% TAVR, 10.0% SAVR), and 30-day stroke rate was 2.7% with an average length of stay of 9.7 ± 8.69 days. (SAVR 10.35 ± 8.17 days, TAVR 9.56 ± 8.84 days). The one-year survival was 90% in SAVR patients and 70% for TAVR patients with no significant difference in sex and age matched actuarial survival to nonagenarians in US population (Figure 1). KCCQ summary scores increased significantly from a baseline score of 47 to 77.5 at one year (SAVR 78.8; TAVR 74.0) (Figure 2). The majority of patients (72.3% overall, 75.9% TAVR, 55.6% SAVR) were discharged directly to home, an important endpoint in a population of advanced age. This study highlights the high frailty rates of nonagenarians referred with AS, but demonstrates acceptable long-term survival rates with either SAVR or TAVR with appropriate patient selection. 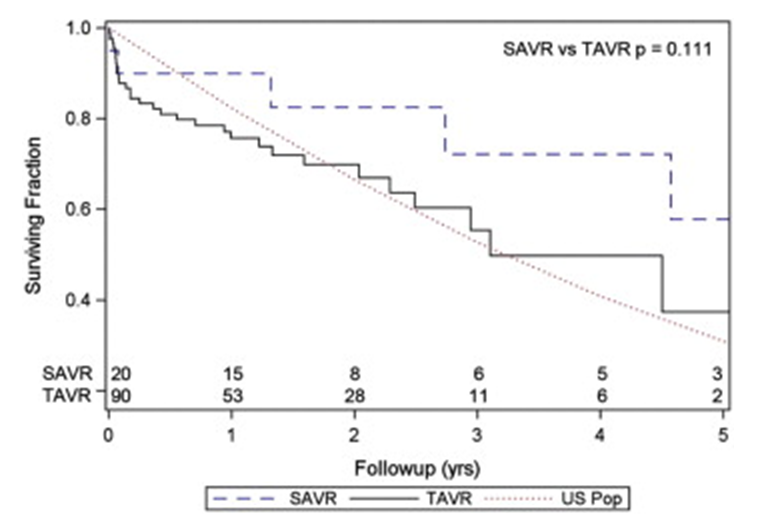 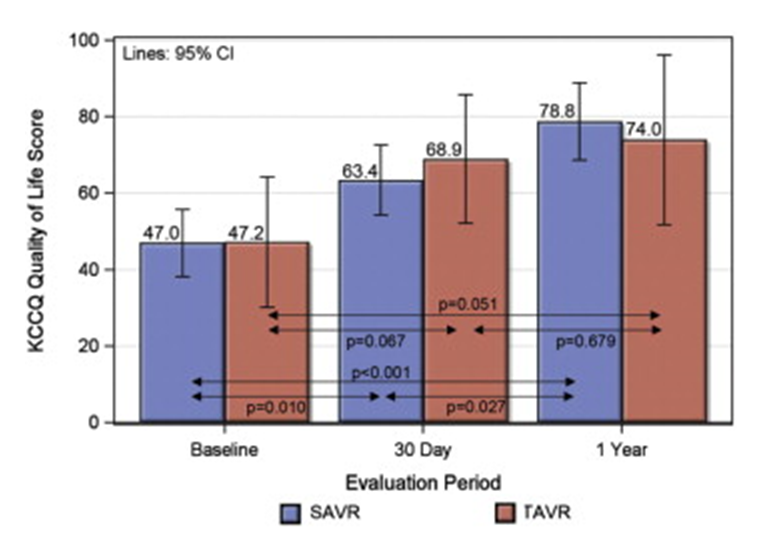 Yamamoto et al reported on the largest non-US experience in treating nonagenarians with severe AS with TAVR in the FRANCE-2 registry (349 patients, mean age 91.9 ± 1.9 years, CoreValve 29.5%, Edwards Sapien Valve 70.5%, Logistic EuroScore 24.9 ± 13.4%) from January 2010 to November 2011.11 General anesthesia was only used in 60.4% patients 90 years of older. 30-day mortality was 11.3%, one-year mortality was 27.7%. No specific differences in 30-day and one-year mortality were noted when compared to patients aged 80 to 84 years and 85 to 89 years after adjustment for baseline differences. The in-hospital major stroke rate was 4.0% and median length of stay was 9.4 ± 6.7 days. These results are comparable to the US experience reported, with almost 40% of cases performed using conscious sedation.

Kayatta et al recently published their experience on TAVR in 95 nonagenarians (mean age 91.8 ± 1.8 years, STS PROM score 14.5 ± 7.3%) at Emory University between 2007 and 2014 (66 TF-TAVR, 14 TA-TAVR, 14 Trans-aortic TAVR, 1 Trans-carotid).12 Interestingly, most procedures on patients undergoing TF-TAVR after 2012 were done using conscious sedation as part of a minimalist approach. Overall 30-day mortality was 3.2%, with a mean length of stay of 6.8 ± 5.1 days. Survival was 75.5% at one year, 54.7% at two years and 43.6% at three years. Sixty-three percent of patients were able to be discharged directly to home. While this study is the smallest series reported, the low 30-day mortality rate should focus efforts on evaluating a minimalist approach in this high-risk population.

Based on the available data on TAVR in nonagenarians, while nonagenarians have a high burden of comorbidities, frailty and high STS PROM, they have an acceptable risk-adjusted short-term and long-term survival benefit with TAVR along with improvements in functional and quality of life parameters. Additionally, nonagenarians have similar improvements in survival and quality of life parameters as compared to younger patients, and outcomes may be optimized with a minimalist approach and transfemoral access. This information is critical to individualize decision making regarding TAVR for nonagenarians, as well as for setting realistic expectations of post-TAVR recovery. Further studies are needed to evaluate the optimal access strategy, improved frailty assessment, and the effect of conscious sedation and minimalist approach on TAVR outcomes in the very elderly. Finally, further evaluation of appropriate pre- and post-procedural care will optimize clinical, functional and quality of life outcomes in nonagenarians who undergo TAVR.

YOU ARE HERE: Home > Latest in Cardiology > Transcatheter Aortic Valve Replacement in Nonagenarians