Ethylene diamine tetraacetic acid (disodium EDTA or edetate disodium), patented in 1938 by Munz, is a chelating agent capable of binding cationic metallic and nonmetallic ions and mobilizing them from physiological tissue in a process termed chelation.1 EDTA can complex with metals such as lead and cadmium, with the EDTA-metal chelate being excreted in the urine. Edetate disodium (the sodium salt of EDTA), which binds to calcium among other cations, was first used to treat hypercalcemia and digitalis intoxication. Later, in the mid-20th century, motivated by the calcification present in advanced coronary disease, practitioners began using edetate disodium to treat symptoms of cardiovascular disease with initially positive, albeit uncontrolled, results.2 These early reports were followed by over 50 years of uncontrolled case reports and case series3 and 3 small clinical trials.4-6 The trials enrolled fewer than 300 patients in aggregate and had surrogate endpoints and short follow-up. Although interpreted as negative, they could not exclude a small-to-moderate benefit of edetate disodium chelation therapy. Despite, or because of, an absence of clear evidence, most traditional physicians shunned the practice.

Despite chelation therapy being rejected by traditional medicine, pockets of practitioners continued administering edetate disodium treatments with many case reports and case series published. Occasionally, there were reports of serious harm, including death, that were usually due to errors in drug selection, dosage, or rate of infusion.7 To definitively determine the effectiveness and safety of chelation therapy, the National Center for Complementary and Alternative Medicine and the National Heart, Lung, and Blood Institute released a request for applications in 2001 for a definitive study of edetate disodium treatment in subjects with coronary artery disease (CAD), and the aptly named TACT (Trial to Assess Chelation Therapy) was born.

TACT patients were aged 50 years or older and had an acute myocardial infarction (MI) at least 6 weeks prior to enrollment and a creatinine level of 2.0 mg/dL or less.8 Because chelation therapy was typically administered in conjunction with a high-dose oral multivitamin and multimineral regimen, a 2 x 2 factorial trial was designed to test intravenous chelation versus intravenous placebo and oral multivitamin and multimineral versus placebo vitamins/minerals. The primary composite endpoint was all-cause mortality, MI, stroke, coronary revascularization, and hospitalization for angina, which is similar to that used in the ACCELERATE (Assessment of Clinical Effects of Cholesteryl Ester Transfer Protein Inhibition With Evacetrapib in Patients at a High-Risk for Vascular Outcomes), WIZARD (Weekly Intervention with Zithromax for Atherosclerosis and its Related Disorders), and JUPITER (Justification for the Use of Statins in Primary Prevention: An Intervention Trial Evaluating Rosuvastatin) trials and other modern studies. A total of 1708 patients were enrolled with a median follow-up of 55 months. Patients were treated with 40 infusions containing up to 3 grams of intravenous edetate disodium (reduced based on renal function).

The results of TACT, which were widely expected to drive the final nail into the coffin for chelation therapy, surprised the blinded investigators and shocked the traditional medical community. Chelation therapy reduced the risk of cardiovascular events by 18% (hazard ratio [HR] = 0.82; 95% confidence interval [CI], 0.69-0.99; p = 0.035; Figure 1), with a 5-year number needed to treat (NNT) of 18 patients to prevent an event.9 Continued separation between the two curves at the completion of the study suggested a sustained effect of toxic metal removal by chelation. The addition of oral multivitamin and multimineral to chelation, compared with double placebo, demonstrated even more positive results with a 5-year NNT of 12 (p = 0.016).10

Figure 1: The primary endpoint was a composite of death from any cause, reinfarction, stroke, coronary revascularization, or hospitalization for angina. 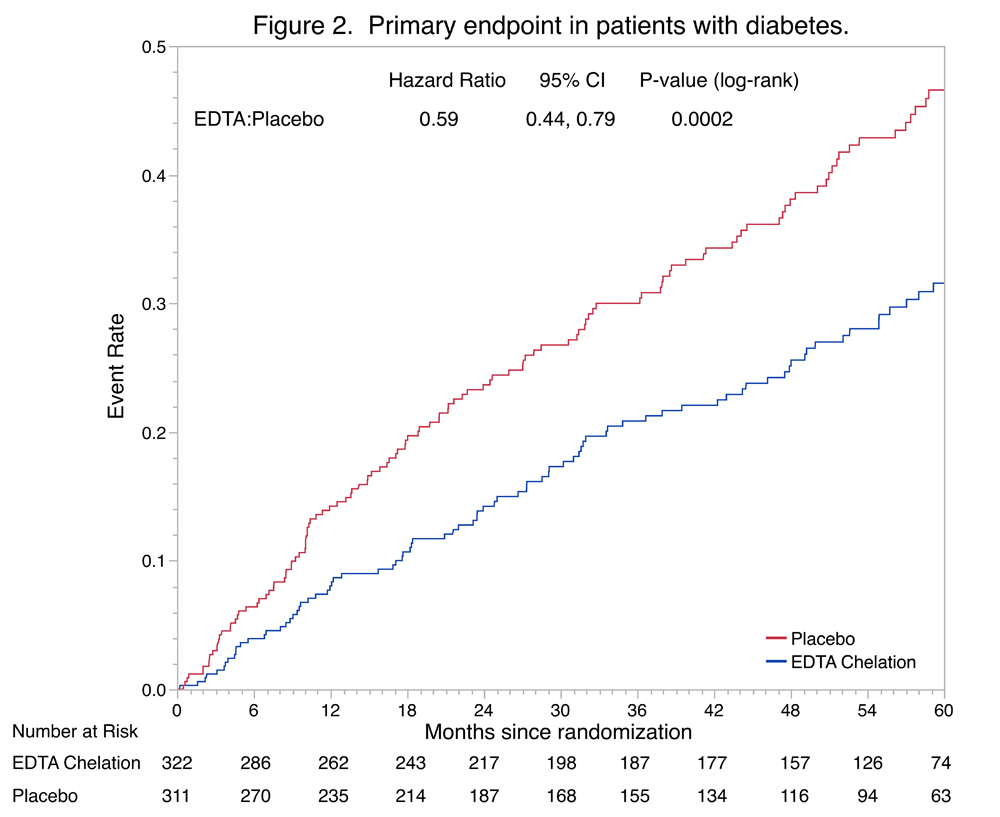 The cardiology community greeted the results of the National Institutes of Health-funded TACT with skepticism. Much of the controversy originated in the apparent lack of mechanism of benefit and the air of inexplicable "black magic" that surrounded edetate disodium chelation. But these possible mechanisms existed in silos of epidemiology, toxicology, and basic science in diabetes.

As a result of the expanded availability of automobiles following World War II in the United States, along with the use of tetraethyl lead as a gasoline additive, lead consumption underwent an unprecedented increase through the 1970s. Despite major advances in preventing lead exposure through the banning of leaded gasoline, paint, and solder, lead exposure is widespread and still significantly higher today than it was prior to the 17th century.12 Most adults carry lead body burdens from past and ongoing exposure. The relationship between lead and cardiovascular risk has been acknowledged for some time.13 National Health and Nutrition Examination Survey analyses demonstrated that although blood lead levels have on average dropped since lead additives were removed from gasoline, blood lead remains linked to adverse cardiovascular events including MI, hypertension, stroke, and peripheral artery disease at modern exposure levels.14 Chronic lead burden, as measured in tibial and patellar bone, has been related to increased incidence of MI and higher mortality in men who participated in the Veteran Affairs Normative Aging Study.15

Lead induces oxidative stress, inflammation, and a reduction in bioavailable nitric oxide.16 It has been postulated that these mechanisms play a role in lead-related hypertension, endothelial dysfunction, and vascular disease. Lead-induced hypertension was reversible after treatment with an intravenous chelating agent or anti-oxidant therapy in animal models.16 Lead can induce epigenetic modifications, including hypomethylation in a collagen type I alpha 2 gene promoter,17 a genetic sequence that plays a role in the production of connective tissue.

Cadmium, at levels that are well below those associated with clinical signs and symptoms of cadmium intoxication, is associated with hypertension, stroke, MI, peripheral artery disease, and death in population-based studies such as the Strong Heart Study and National Health and Nutrition Examination Survey.18 Cadmium may contribute to the progression of atherosclerosis by causing damage to DNA or through oxidative mechanisms.19 Cadmium may be connected to an increased risk of premature atherosclerosis, and it may function in the induction of occlusive atherosclerotic disease.19 Experimental studies have demonstrated that cadmium exposure can result in endothelial damage and induce cell death. Cadmium exposure has been associated with altered methylation patterns in genes encoding proteins that play roles in longevity, cardiovascular disease, and vascular calcification (RAS protein activator like 1 and Klotho).20 Edetate disodium chelates lead and cadmium and allows their efficient removal by renal excretion.

In epidemiologic studies, the association of cadmium with cardiovascular disease was stronger among participants with diabetes. Diabetic patients have been shown to have higher urinary concentrations of metals such as cadmium.21 Furthermore, the enhanced effect of chelation on diabetic patients could be related to the inhibition of the formation of some advanced glycation end products thought to be important for some of the vascular complications commonly seen in diabetes.22 These pathways, in many cases, require metal-catalyzed oxygen chemistry. Others have hypothesized that chelation of metal cations could result in fewer advanced glycation end products.23 In fact, there is very preliminary evidence that diabetic medications, such as metformin and angiotensin converting enzyme inhibitors, have metal chelating capabilities.23 A plausible mechanism for the results of TACT, therefore, is that toxic metals are a modifiable risk factor for atherosclerosis.

Recognizing the weight of the TACT results, the American Heart Association and the American College of Cardiology upgraded edetate disodium chelation from a 3C to a 2B indication in their 2014 revision of the guidelines for the treatment of chronic ischemic heart disease.24 Patient-centered clinicians should recognize a new arrow to keep in their quivers for the high-risk diabetic patient. Nevertheless, additional studies are needed to confirm the utility of chelation therapy in post-MI diabetic populations. Trial to Assess Chelation Therapy 2 received funding from the National Institutes of Health for a planning year. This will be a replicative study of edetate disodium chelation in post-MI diabetic patients. Interested investigators should contact Dr. Lamas at Gervasio.Lamas@msmc.com, @glamasmd, linkedin.com/in/gervasio-lamas-b1b31986, and http://tact2.org.

YOU ARE HERE: Home > Latest in Cardiology > Chelation Therapy for CAD