Female cardiologists remain underrepresented in the field, comprising less than 20 percent of cardiologists who see adult patients. Additionally, women may be less likely than their male counterparts to get married and have children and may be more likely to face challenges related to child care, family leave policies and professional discrimination, according to results from the third professional live survey conducted by the ACC which will be presented at ACC.16 in Chicago.

The study, led by Sandra Lewis, MD, FACC, chair of ACC’s Women in Cardiology Section, looked at results from ACC’s 2015 professional life survey – which examined cardiologists’ career decisions, family life and satisfaction by gender – and compared data to two previous surveys that were conducted in 1996 and 2006.

Out of the more than 2,000 cardiologists who completed the 2015 survey, results showed that women make up half of all medical school graduates and nearly half of internal medicine specialists, yet they represent less than one-fifth of adult cardiologists.

Further, men are far more likely to report having a spouse that provides child care at home, at 57 percent as compared to 13 percent among women. Nearly half of women report needing additional child care for nights and on-call rotations, as compared to a quarter of men.

One area of improvement for both women and men is that around one in 10 report no official family leave policy at their workplace. This proportion is significantly down from rates seen in past surveys and suggests that more workplaces have adopted such policies.

The survey also sheds light on career satisfaction and professional challenges. Although about seven out of eight cardiologists of both genders report overall satisfaction with their careers, women are more likely to say their level of professional advancement is lower than their peers.

Sixty-three percent of women report experiencing past discrimination, such as receiving a lower salary than others in their cohort or being passed up for promotion. That proportion is significantly down from 71 percent and 69 percent in 1996 and 2006, respectively, but still substantially higher than the rates reported by men, which remain flat at around 22 percent in all three surveys. 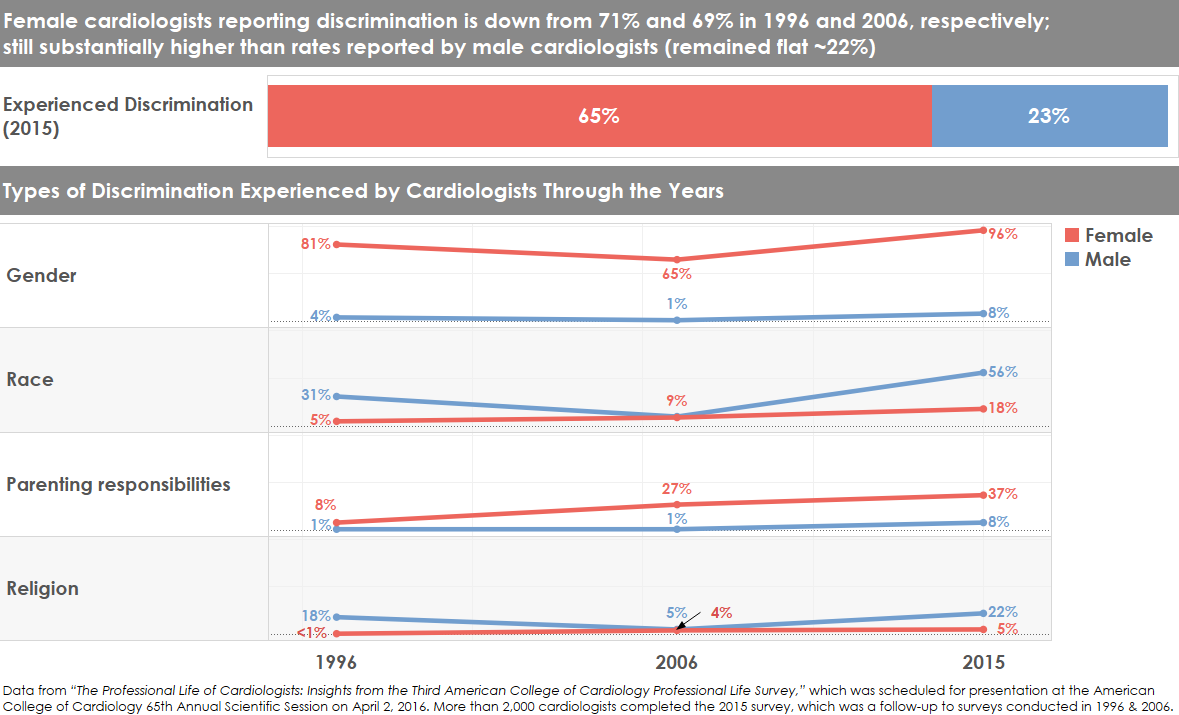