Lowering LDL Cholesterol: When Numbers are Not Enough

Clinicians worldwide continue to be challenged by cholesterol management for their patients; specifically, whether to attempt low-density lipoprotein (LDL-C) reduction to previously described targets, or to specific percent reductions (e.g., ≥ 50% or < 50%) based on an individual's risk assessment as advocated by the US Guidelines.1 Indeed, Canadian and European Guidelines suggest using both strategies.2,3 Data addressing whether the high-intensity statin strategy (to achieve ≥ 50% LDL-C reduction) correlates with improved cardiovascular outcomes is limited.

In addition, it is known that LDL-C reduction to the same strength of statin can vary widely in the population4 resulting in a significant number of patients who may continue to be at increased, potentially modifiable risk, for future events. Recently, the Treating to New Targets (TNT) investigators reported in their known coronary artery disease patient population that visit-to-visit variability in LDL-C levels correlated with increased cardiovascular risk, suggesting yet another possible contributor to residual risk, reportedly independent of LDL-C levels.9

With the recent addition of proprotein convertase subtilisin/kexin type 9 (PCSK9) inhibitors to the clinicians' cholesterol lowering armamentarium, it is important to define goals of treatment and which specific patients may derive the greatest benefit of new treatment strategies. Our most recent analysis of the Justification for the Use of Statins in Prevention: An Intervention Trial Evaluating Rosuvastatin (JUPITER) trial was designed to examine these clinical questions further and to address the relationship of percent LDL-C reduction with clinical outcomes and cardiovascular event rates.5

JUPITER study participants included 17,802 asymptomatic women ≥ 60 years and men ≥50 years who had LDL-C < 130 mg/dL, high-sensitivity C-reactive protein (hsCRP) ≥ 2.0 mg/L and triglycerides < 500 mg/dL.6 Patients with previous cardiovascular disease, diabetes or lipid-lowering therapy were excluded. At randomization, all participants were assigned to either rosuvastatin 20 mg daily or to matching placebo. Patients were followed prospectively for a period up to 5 years (median 2 years) for the occurrence of first cardiovascular events.

Blood samples were collected at baseline and follow up after participants fasted for 8 hours. In the current analysis, paired samples were used at baseline and at 1 year follow up. Measurements were obtained for total cholesterol, triglycerides, high-density lipoprotein cholesterol (HDL-C), apolipoprotein B (apoB) and hsCRP values. LDL-C concentrations were either calculated via the Friedwald equation when triglycerides were < 400 mg/dL or measured directly when triglycerides where ≥ 400 mg/dL. Non-HDL-C values were calculated by subtraction of HDL-C from total cholesterol.

Trial primary outcome was as pre-specified in the JUPITER protocol6 defined as the first occurrence of non-fatal myocardial infarction, non-fatal stroke, hospitalization for unstable angina, arterial revascularization, or cardiovascular death.

Cox proportional hazards were used to estimate hazard ratios (HRs) and 95% CIs for the comparison of cardiovascular events in each statin-treated group compared with placebo. Multivariate hazard ratios (95% CIs) were also computed after adjusting for those variables found on regression analysis to have a significant impact on on-treatment LDL-C levels, including baseline LDL-C. All analyses were repeated separately for non-HDL-C and apo B. Analyses were also repeated using tertiles of percent lipid reduction rather than the pre-specified ≥ 50% threshold.

As shown in Fig.1, for those patients allocated to 20 mg of rosuvastatin the magnitude of % LDL-C reduction was directly related to the incidence of first cardiovascular events observed during the trial follow up period. After adjusting for covariates predictive of change in lipid levels (including baseline LDL-C levels), adjusted HRs were all significant (P< 0.00001). Similar results were seen in non-HDL-C reduction and apo B reduction, with again wide variability in individual response. In sensitivity analysis using tertiles of % reduction, similar findings were obtained.

Several important findings are highlighted in this secondary analysis from the JUPITER trial. Firstly, the data obtained in this primary prevention population show that sequentially greater clinical benefits are seen with sequentially greater % reductions in cholesterol on statin therapy. This held true when adjusting for characteristics associated with greater lipid response to statin therapy and also in a subgroup analysis of those who achieved on-treatment levels of LDL-C between 50 and 75 mg/dL. These findings are consistent with outcomes of the recent secondary prevention IMPROVE-IT trial that demonstrated decreased event rates with greater LDL-C reductions in patients following an acute coronary syndrome.7

Secondly, we also observed wide individual variation in the % reduction in cholesterol in response to statin therapy, consistent with clinical practice and previously published data. A complex interplay of genetic influences on cholesterol metabolism, including the previously described PCSK9, APOE, LPA and ABCG2 genes,8 behavioral and environmental factors such as medication compliance and diet and exercise, likely play a role in the observed variability. In addition, patients with heterozygous familial hypercholesterolemia and/or elevated lipoprotein(a) levels may have less response to statin therapy.

Patients enrolled in JUPITER all had LDL-C values < 130 mg/dL but elevated hsCRP and hence they were not low risk patients. This most recent analysis of the data leads us to support an individualized approach to cholesterol management with attention to % LDL-C reduction, in addition to fixed LDL-C targets. Clinicians should probe into the modifiable reasons for a patient not achieving the expected LDL-C targets or % reduction with careful attention to the patient's behavioral response on medications. Frequent assessment of diet and exercise can reveal less than ideal practices, despite medication adherence, with the potential to impact both cholesterol values and residual cardiovascular risk.

The importance of reducing LDL-C by at least 50% has also recently been endorsed by Waters et al. after their pooled analysis of several randomized trials from patients with known atherosclerotic disease, which suggested that % LDL-C reduction added incremental prognostic value over LDL-C attained or statin dose utilized.10 In high risk patients who fail to achieve a 50% LDL-C reduction, the addition of alternative cholesterol lowering agents may be considered. Given the significant LDL-C lowering observed with PCSK9 inhibitors, there may be a potential future application for these drugs in these patients as illustrated in Fig.2, if they are proven to be efficacious in reducing clinical events.

Future outcomes data from PCSK9 inhibitor trials will be of significant importance when deciding on adjunctive agents in high-risk patients with suboptimal statin response. Meanwhile, more emphasis should be placed on lifestyle and behavioral modifications that could increase the percent reduction in LDL-C during statin therapy. Such an optimal prevention strategy for reducing LDL-C and cardiovascular events should emphasize the importance of regular physical activity together with attaining and maintaining an optimal body weight and a healthy Mediterranean-style diet. 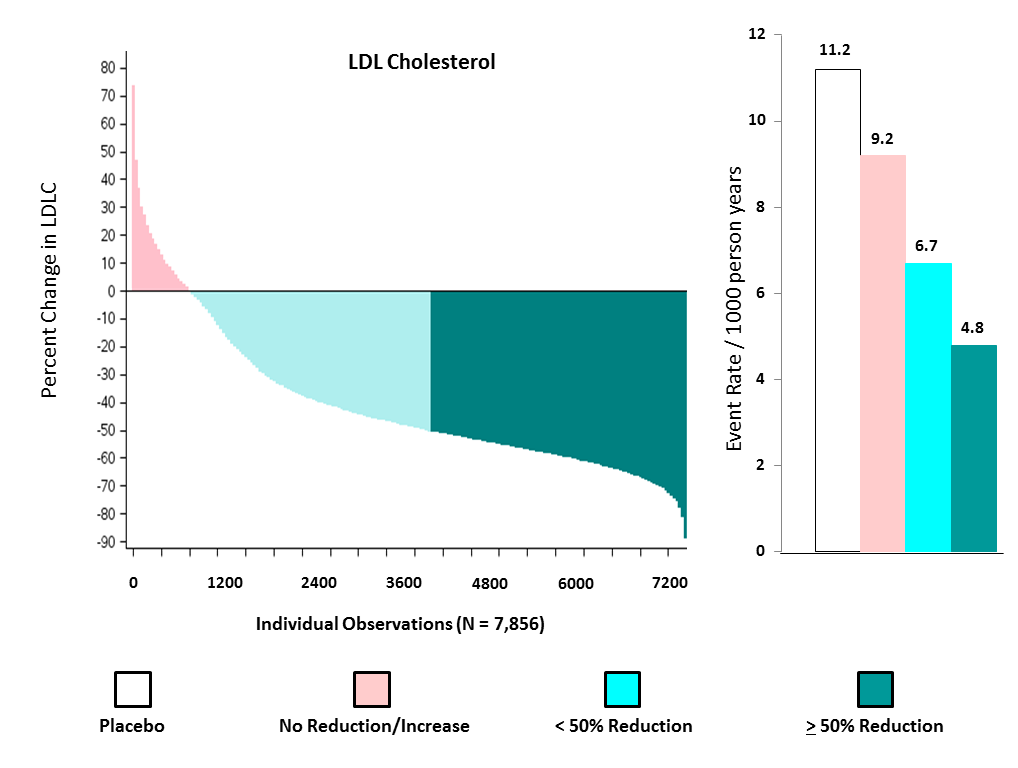 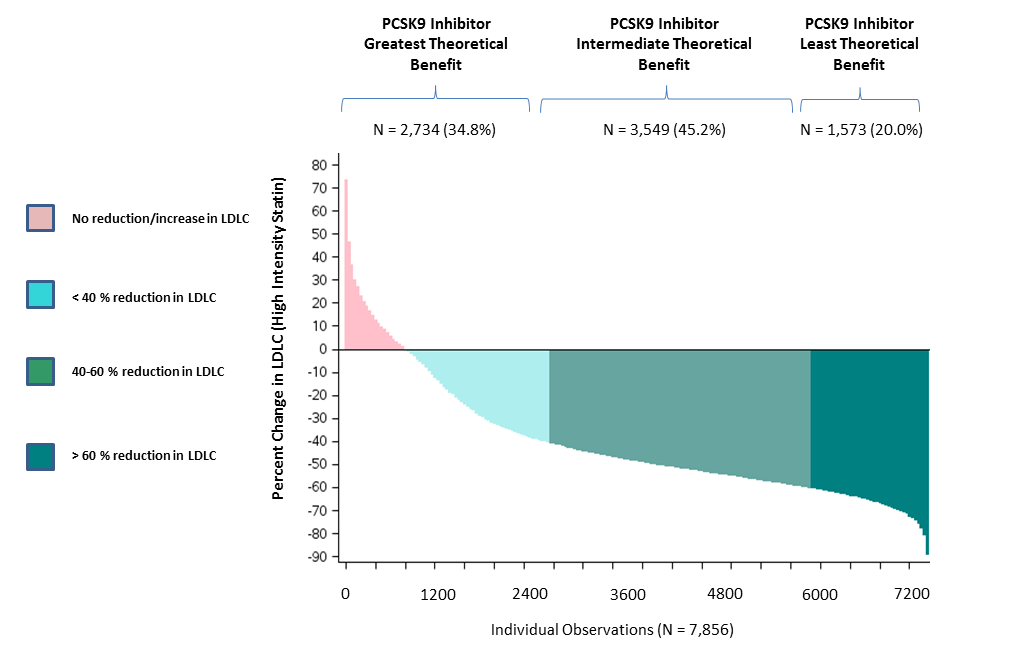 YOU ARE HERE: Home > Latest in Cardiology > Lowering LDL Cholesterol: When Numbers are Not Enough