Acute coronary syndromes (ACS) are life-threatening cardiovascular emergencies. Accurate diagnosis and risk stratification are pivotal because immediate therapeutic management of patients is associated with significant improvement of their prognosis.1 Cardiac troponins have become a key component of the universal definition of myocardial infarction and are indispensable for its early detection. Although the current generation of high-sensitivity troponin assays is unmatched in its sensitivity to detect myocardial damage, elevations can occur in other acute or chronic cardiovascular disorders such as heart failure, pulmonary embolism, arrhythmias, or renal failure.2 Several studies have even demonstrated acute elevations of cardiac troponin after strenuous yet still physiological exercise.3 Keeping in mind that 25 out of 1,000 marathon runners seek medical attention after their races,4 this issue is of clinical relevance when it comes to the interpretation of cardiac biomarkers in the context of an athlete presenting in your emergency unit.

Several studies have shown significant cardiac troponin increases after different types of exercise. In a recent meta-analysis,3 we showed that high-sensitivity cardiac troponin T (cTnT) is elevated above the 99th percentile in approximately 83% of individuals after prolonged and intensive exercises. The pathomechanism behind this increase is presently not well understood. Several hypotheses have been proposed, such as transmembrane leakage of cytoplasmic-free cTnT and cardiac troponin I (cTnI) or decrease of troponin clearance from the plasma, both potentially caused by overload with free radicals, myocardial stretch, increased core temperature, or alteration of pH (Figure 1). It also could represent genuine but subclinical cardiomyocyte apoptosis or necrosis.3,5 On the other hand, the typically fast clearance (monophasic pattern) and kinetics do not resemble that observed in myocardial infarction (biphasic pattern).6 Altogether, the evidence favours the "increase of membrane permeability" hypothesis as the cause in the majority of cases of cardiac troponin elevation after exercise.7,8 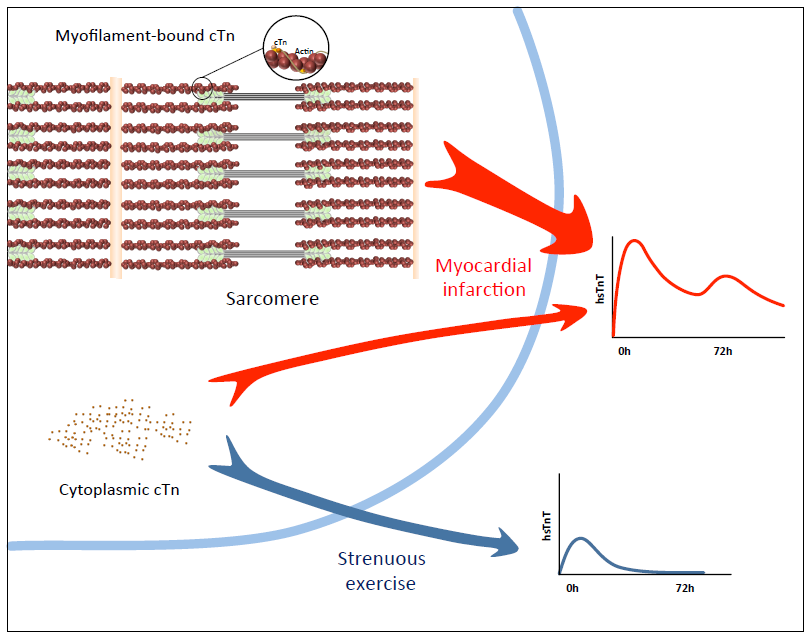 Figure 1: This shows the schematics of the troponin release after myocardial infarction versus endurance exercises. Prolonged exercise can increase cardiomyocyte membrane permeability and secretion of cytoplasmic-free cardiac troponin. On the contrary, troponin elevation in myocardial infarction is due to cardiomyocyte necrosis and release of myofilament-bound troponin.

Whether the observed changes have pathological meaning remains an unanswered question. Some studies reported an increased incidence of atrial fibrillation or arrhythmogenic right ventricular cardiomyopathy among endurance athletes.3 Repetitive cardiac micro-injuries due to endurance sports such as triathlons and marathons indicated by troponin release may play a role in developing cardiac maladaptation.9 An increase of transforming growth factor-β1 expression, which can promote fibrosis, could for instance be observed in the atria and right ventricle (RV) of animal exercise models.10 Furthermore, focal late gadolinium enhancement in cardiac magnetic resonance imaging was detected in the interventricular septum at the site of RV insertion in endurance athletes.11,12 Such fibrotic patches may be a plausible substrate for arrhythmias.13 Evidence also exists for the development of autoimmunity mechanisms against circulating cardiac proteins, triggering cardiomyopathy and arrhythmia in mice and potentially also humans.14 However, until now, no long-term outcome data of athletes having repetitive and significant elevation of cardiac biomarkers have been available.

Any cardiac biomarker, not just cardiac troponin, can be elevated after exercise. Several studies demonstrated this for creatine kinase-myocardial band, myoglobin, lactate dehydrogenase, and aspartate aminotransferase.15 Our recent meta-analysis showed that N-terminal pro-B-type natriuretic peptide (NT-proBNP) increases on average by about 67 ng/l and B-type natriuretic peptide (BNP) by about 10 ng/l after strenuous exercises,3 most likely due to changes in diastolic filling and enlarged venous return leading to temporary RV overload.16 The proportional elevation of NT-proBNP was more pronounced than BNP.3 On one hand, this may be due to a shorter half-life of BNP; on the other hand, it may be due to reduced renal elimination of NT-proBNP during exercise. Copeptin, a novel biomarker for diagnosis and risk stratification of ACS and chronic heart failure, increases remarkably after endurance sports.17 This post-exercise increase is not related to renal function because no association could be observed between serum creatinine and copeptin level.17,18 Hence, the elevation is likely due to the (cardiocirculatory) stress induced by exercise.18

Among patients who are admitted to the emergency department after endurance sports, a comprehensive medical history is of critical importance. In cases of sports-related trauma/injuries, troponin measurements are not necessary. In cases of typical cardiovascular symptoms such as chest pain, dyspnoea, palpitations, or syncope, which cannot be clearly associated with volume depletion or neurological causes, a careful clinical workup (Figure 2) including serial measurements of cardiac troponins is recommended.7 If ACS is still suspected, especially if regional left ventricular dysfunction is present on echocardiography or cardiac magnetic resonance imaging, invasive diagnostic testing should be considered.

Figure 2: This chart shows the rational clinical approach in patients admitted to the emergency department after endurance sports (adapted and modified from Shave et al.).7

Elevated cardiac biomarkers in the context of prolonged or strenuous exercise should be interpreted carefully. Not only cardiac troponins, but also natriuretic peptides and D-Dimers, which are broadly used sensitive biomarkers for ACS, heart failure, or pulmonary embolism, can increase after exercise.3,19 When performing cardiac imaging, transient RV dilatation and dysfunction are often found after strenuous exercise, potentially mimicking a life-threatening condition.3 Consideration of the clinical history and serial measurements of biomarkers can indicate the cause of the alterations (Figure 3). Lack of awareness that cardiac troponin elevations are commonly seen after exercise may trigger unnecessary, expensive, and invasive procedures. The "treat the patient, not the blood test" strategy should always be the premise. 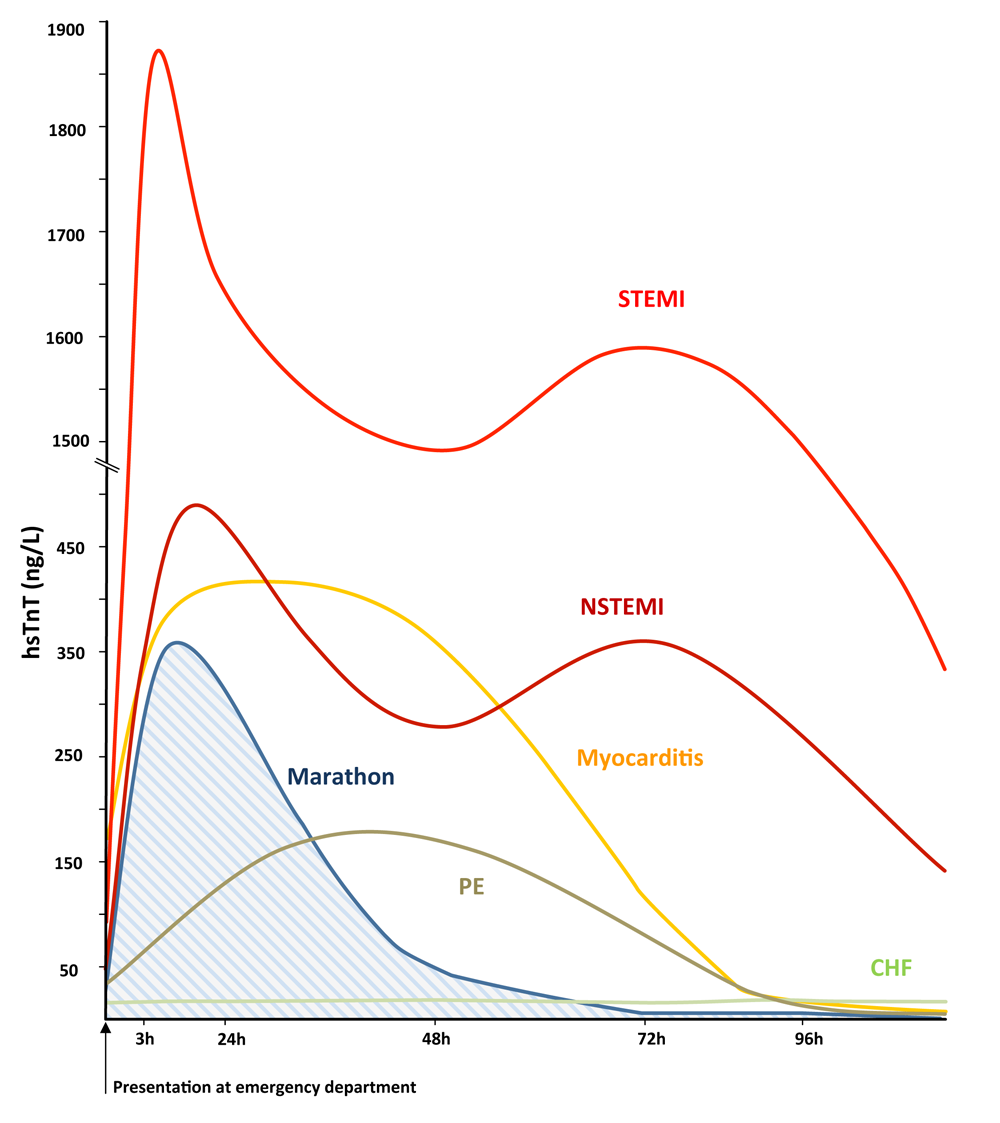 YOU ARE HERE: Home > Latest in Cardiology > Cardiac Biomarker Changes After Endurance Sports