Aortic stenosis (AS) has become the most common form of valvular disease with a shift from rheumatic disease to degenerative calcific valvular disease.1-3 The prevalence of AS (AS) has progressively increased with the aging population of the Western World, with prevalence of severe AS as high as 3.4% in patients ≥75 years of age.4-6 Importantly, it is estimated that up to 1.3 million patients in Europe and nearly 1 million patients in the United States will develop severe symptomatic AS by 2025, with doubling of these numbers by the year 2050.4 Due to the introduction and approval of transcatheter aortic-valve replacement (TAVR) over the last decade, many patients with severe AS who were either not surgical candidates, or were deemed high risk for surgery, are now able to receive symptomatic relief and improved life expectancy with TAVR.3,7,8 There are now two commercially available valves in the United States, the self-expanding (SEV) CoreValve (Medtronic, Minneapolis, MN) and balloon-expandable (BEV) Edwards SAPIEN and SAPIEN XT (Edwards Lifesciences, Irvine, CA). With the recent U.S. Food and Drug Administration (FDA) approval of the SAPIEN 3 (Edwards Lifesciences, Irvine, CA) and the recapturable Evolut R (Medtronic, Minneapolis, MN), the clinical application of these valves will increase significantly in the near future.9,10 Additionally, multiple new valves are currently in development. These include the Lotus Valve System (Boston Scientific, Marlborough, MA), Portico re-sheathable valve (St. Jude Medical, St. Paul, MN), and the Direct Flow Medical valve (Direct Flow, Santa Rosa, CA), which are being studied in on-going clinical trials.11-13

Scope of the problem

The increasing use of TAVR (26,414 procedures in the United States alone in 2014)14 has led to the realization that a proactive approach must be developed for the procedure's most common complication, atrioventricular block (AVB) requiring permanent pacemaker (PPM). This risk has been reported to be as high as 25% with SEV and approximately 7% with BEV, in stark contrast to the reported 3.2-7.1% with surgical aortic valve replacement (SAVR).15-19 The PPM is implanted during the index hospitalization (97.1%) in the majority of the patients, with median time to PPM being three days post-TAVR.15,20

The high incidence of AVB after TAVR is not unexpected, given the anatomic proximity of the conduction system (atrioventricular bundle and the left bundle branch (LBBB)) to the aortic valve.21,22 The conduction system (notably, the bundle of His) is located in the membranous septum of the left ventricular outflow tract (LVOT), a location that is highly susceptible to direct trauma, compression, and ischemia during and after valve deployment.23,24 The significant disparity in the incidence of AVB requiring PPM among the two commercially available valves is thought to be due to the design differences between them. With the SEV, the lower portion – referred to as the skirt – is positioned lower into the LVOT than the BEV (Figures 1 and 2), leading to increased risk of impingement of the AV conduction system by direct pressure from the self-expanding valve.25 Importantly, factors that predispose patients to requiring PPM, regardless of the type of valve, include right bundle branch block or left anterior fascicular block at baseline, smaller LVOT diameter, and higher ratio of annulus diameter to LVOT diameter.20 Additionally, the depth of the prosthesis in the LVOT has been shown to be an independent predictor of need for PPM;26 furthermore, valve sizing likely also plays a role. There has been a shift in some centers to "oversize" the prosthesis, particularly as post-TAVR perivalvular aortic insufficiency has been identified as a risk for reduced survival,27 which increases the risk for subsequent post-procedural AV block. 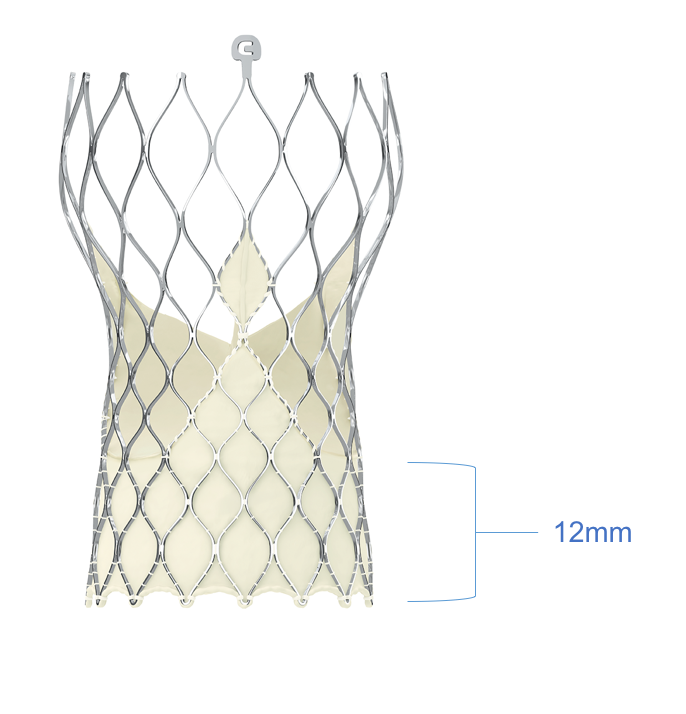 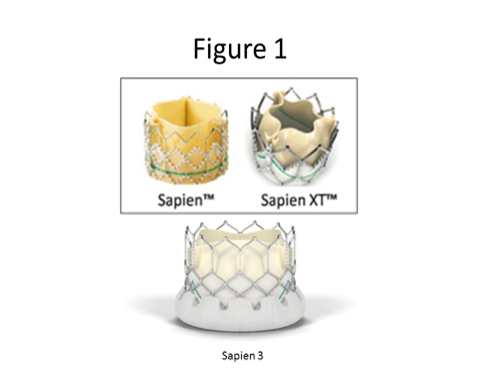 Although numerous studies have shown detrimental effects of long-term right-ventricular (RV) pacing, the clinical implications in the TAVR population are unclear.28-31 Chronic RV pacing results in wide QRS, in the pattern of LBBB, with dyssynchrony during systole. This dyssynchrony presumably leads to LV remodeling and subsequent adverse outcomes, including increased risk of heart failure and mortality,28,29 especially in patients who are RV paced more than 50% of the time.32 Unlike the patients studied in the aforementioned trials, data for patients with TAVR and newly implanted PPM have been mixed, with most studies failing to demonstrate any differences in mortality or hospitalization in this population.15,20,30,31 Indeed, there may be a paradoxical benefit to LV dyssynchrony in patients undergoing TAVR with discrete upper septal hypertrophy (or sigmoid interventricular septum), in which there may be a salutary benefit to RV pacing to reduce dynamic outflow tract obstruction. On the other hand, there may be a role for biventricular pacing to reduce mitral regurgitation (MR) and improve LV filling for patients with reduced LVEF undergoing TAVR.

A study of 1,556 patients by Urena et. al included BEVs and SEVs, and showed an overall incidence of new PPM (within 30 days of TAVR) to be 15.4%, but found no difference in mortality or heart failure at mean follow-up of 22 months between the group that received PPM and the group that did not.15 Interestingly, those who received PPM within 30 days had a protective effect with a decrease in unexpected deaths, defined as sudden death or death of unknown cause, that persisted throughout the follow-up period. The putative mechanism of sudden death prevention is prevention of very late bradyarrhythmias, although objective data regarding the incidence of this complication is not available. Separately, a drop in ejection fraction at 6-12 months was noted in follow-up in patients that received PPM, but without any definite clinical impact. In contrast, a retrospective study by Nazif et.al from the PARTNER trial and registry data showed that patients who required PPM post-TAVR had higher incidence of repeat hospitalizations of any cause (18.2% vs. 23.9%, p=0.045), and numerically higher incidence of death at one year (20.8% vs. 26.3%, p=0.08).20 There was no difference in the LVEF at one year between the two groups.

Despite the conflicting data regarding long-term outcomes in patients with PPM post-TAVR, there is certainly consensus that less than half of patients demonstrate PPM-dependence at long-term follow-up, indicating a degree of recovery of the conduction system.20,33,34 This finding may partially explain the lack of negative clinical associated with high degree of RV pacing in patients requiring PPM. Factors that may predict which patients will require long-term pacing versus those who will recover their native conduction are not clear at this time, and further research needs to focus on identifying these patients.

When evaluating a patient for TAVR, risk stratification for possible arrhythmic complications is imperative (Figure 3); all patients should have an electrocardiogram (ECG) prior to TAVR. Risk factors associated with increased risk for pacemaker implantation post-TAVR include presence of bundle branch block, isolated fascicular block, or first degree AV block on the baseline ECG. If any of these risk factors are present on the baseline ECG, it is reasonable to consult the electrophysiology (EP) team prior to the procedure to expedite pacemaker implantation if it becomes necessary in the post-operative period.

Prior to the TAVR, a transvenous temporary pacemaker is routinely placed to aid in deployment. Rapid pacing may be necessary during the valve deployment depending on the type of the valve. After successful deployment, if the telemetry shows no evidence of AV block, the transvenous pacer may be left in place for up to 24 hours and then removed if post-operative ECG and telemetry show no changes. If there is evidence of development of first degree AV block during the deployment or in the post-procedure period, the temporary venous pacemaker should remain in place for at least 24-48 hours with back-up pacing as well as continued telemetry monitoring. It is also reasonable to discharge these patients on 24-48 hours of Holter monitoring to ensure no further AV block develops.

If a patient develops new LBBB (LBBB), in addition to continued telemetry monitoring and back-up pacing with transvenous pacemaker, EP consult is appropriate. Longer monitoring at discharge with a 30-day event monitor or implantable loop recorder may be reasonable to evaluate for the later development of symptomatic AV block. Similarly, if a patient develops Mobitz Type 1 AV block, longer term monitoring may also be reasonable. These recommendations are based on the results from the study by Urena et. al, which noted that patients who received a PPM within 30 days had lower mortality, possibly due to protective effect from late-onset brady-arrhythmias.

If a patient at any point during or after TAVR develops Mobitz Type 2 AV block or complete AV block, EP should be consulted for pacemaker implantation prior to discharge (Class I indication).35,36

Permanent pacemaker after TAVR placement is a fairly common complication, with rates ranging from 7-25%, depending on the type of valve. As such, careful evaluation is necessary to identify patients who may be at particularly high risk for development of AVB during the procedure and in the post-operative period. If second-degree heart block (Mobitz Type II) or complete heart block develop intra-operatively or in the peri-operative period, placement of permanent pacemaker is indicated (Figure 3). In patients who develop new LBBB or Mobitz Type I block, close monitoring with an event monitor or implantable loop monitor after discharge may be warranted to allow for closer monitoring of potential late atrioventricular block. 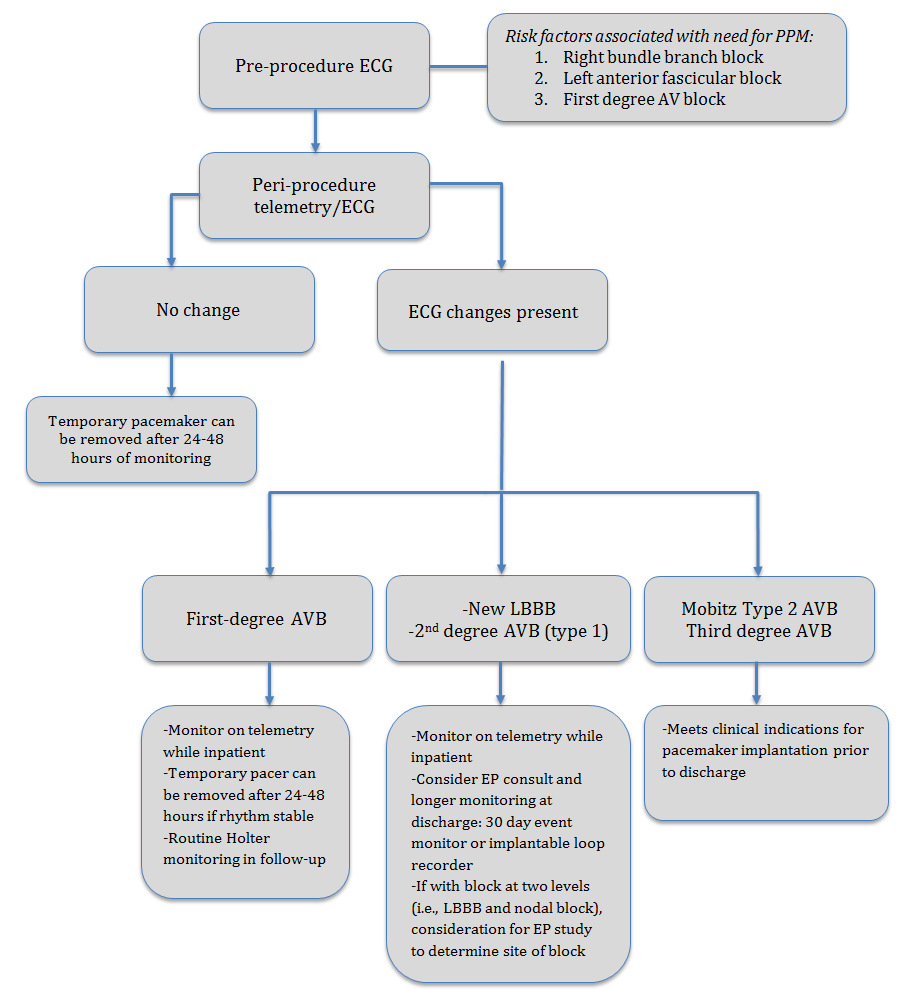 Algorithm for management in the post-procedure setting

YOU ARE HERE: Home > Latest in Cardiology > Risk Stratification for Pacemaker Placement After TAVR