Background
March 4, 2016 marked the 26th anniversary of the death of an elite college basketball player at Loyola Marymount University who suddenly collapsed and died during a televised intercollegiate basketball game at the age of 23. At 6’7” and 210 lbs, was leading the NCAA 1989-89 basketball season in both scoring (32.7 PPG) and rebounds (13.7 RPG).1 Noteworthy, a few months before his death, he had syncope during a game. Extensive testing including cardiac catheterization, electrophysiology (EP) studies, and ambulatory cardiac event monitoring revealed underlying exercise-related complex ventricular tachyarrhythmias for which he was treated with propranolol. Unfortunately, due to increased fatigue and reduced performance capacity, he did not tolerate higher doses of the medication and dosing was gradually weaned. In fact, some reports suggest he had not been taking any medication on game days.2

This tragic story, alongside other famous athletes who died unexpectedly, has served as an impetus to research and better understand cardiac evaluation of athletes over the last three decades. In 1993, Dr. Barry Maron published an article in the New England Journal of Medicine calling for standardized criteria to better risk stratify and appropriately disqualify athletes at increased risk for sudden death.3 Since the publication of that article, the scientific community has made large strides toward meeting that charge in the form of the 16th, 26th, 36th Bethesda conferences, and most recently the Eligibility and Disqualification Recommendations for Competitive Athletes with Cardiovascular Abnormalities published in December 2015.4 In this expert analysis, the authors will review the management of the athlete presenting with syncope.

Syncope is a common and often challenging clinical problem with an estimated lifetime prevalence of ~40% in the general population.6 As such, syncopal spells account for a significant portion of emergency department visits and hospitalizations placing a substantial burden on the American healthcare system. The athlete represents a unique population in the context of the evaluation and management of syncope for two important reasons. First, since athletes are considered symbols of exceptional health, sudden deaths − let alone syncope − are especially shocking and frequently make headlines. Second, long-term removal from athletic activities can result in dramatic emotional and psychological distress. Thus, an accurate and comprehensive understanding of syncope in athletes is crucial in order to avoid tragic outcomes and prevent placement of undue restrictions on healthy individuals.

Classification of Syncope
One study of athletes undergoing preparticipation screening reported 474 out of 7,568 (6.2%) athletes experienced syncope in the preceding five years.7 The differential diagnosis for a syncopal event is broad, with the large majority of episodes secondary to a benign cause, and only a small subset attributable to the presence of underlying structural heart disease. It is helpful to classify athletes with syncope into three cohorts based on the chronological context of the syncopal episode: syncope unrelated to exercise, post-exertional syncope, and exertional syncope.

Syncope unrelated to exercise is the most common presentation, accounting for more than 85% of cases.7 This form of syncope (frequently referred to as neurocardiogenic, or reflex or vasovagal syncope) is largely neurally mediated with poorly understood pathophysiology.8 Vasovagal syncope, considered a benign condition, typically occurs when going from a sitting to standing position, or experiencing fear or emotional distress with specific triggers such as sight of blood or trauma.9 Frequently, these patients describe a prodrome of lightheadedness, pallor, a feeling of warmth, diaphoresis, and nausea or epigastric pain. Situational syncope, as the name implies, tends to be reproducible with certain behaviors or activities such as coughing, bearing down to pass stool, or micturition. Dehydration and reduced intravascular volume can induce a state of orthostatic hypotension and induce a presyncopal event with many of the same prodromal features of reflex syncope but importantly no loss of consciousness.

Post-exertional syncope frequently occurs when exercise is stopped suddenly and reduction of lower extremity muscle pumping results in less cardiac venous return and cardiac output.10 In such a circumstance, an acute increase in myocardial contractility can lead to activation of the cardiac depressor reflex inducing concomitant paradoxical bradycardia. As a result, the athlete may develop acute loss of postural tone, hypotension, and therefore transient global cerebral hypoperfusion – this is termed the Bezold-Jarisch reflex.11 Contributing factors likely include dehydration and reduction in plasma volume. Syncope immediately post-exercise which occurs when the subject is still standing, is usually less concerning than syncope during exercise.7

Syncope which occurs during exercise raises concern for structural heart disease and can serve as the only symptom that precedes sudden cardiac death.12 The differential diagnosis for life-threatening causes of syncope in athletes includes hypertrophic cardiomyopathy (HCM), anomalous coronary artery, arrhythmogenic right ventricular dysplasia (ARVD), ion channelopathies such as Long QT Syndrome (LQTS) or the Brugada Syndrome, myocarditis, and even previously undiagnosed congenital heart disease such as noncompaction cardiomyopathy.13-17 Although not necessarily associated with underlying native structural heart disease, commotio cordis is an important cause of syncope and is characterized by sudden cardiac death attributable to cardiac contusion from trauma to the precordium.18 Heat stroke or hyponatremia must also be considered in patients with exercise related syncope.12

Evaluating an Athlete with Syncope
A comprehensive history is the cornerstone of approaching the syncopal athlete.19 Specifics regarding the circumstances and timeline of the event are critical. In fact, an athlete with loss of consciousness during an athletic practice or event should be immediately removed from further activities until a detailed workup is completed. Figure 1 demonstrates an algorithmic approach to evaluating an athlete with a syncopal event.

Athletes may not recall all events and it is often helpful to speak with family members or witnesses, including the athletic training staff in particular. The patient’s clinical status after the syncopal episode is also a vital aspect of making a diagnosis. For example, myoclonic jerking or bowel or bladder incontinence may suggest seizure activity (although global cerebral hypoperfusion can also mimic these signs). Other peri-syncopal events, such as the presence of a loud noise preceding syncope, can suggest the diagnosis of LQTS.20

Asking specifically for the presence of preceding lightheadedness or presyncopal symptoms, as well as more “red flag” symptoms such as chest pain, palpitations, or shortness of breath is also essential. It is important to highlight that some athletes may minimize symptoms during the interview in an effort to preserve medical permission to continue athletic activities.

Finally, obtaining accurate family and social histories is also important. A family history significant for unexplained deaths or known genetic disorders should initiate further investigation. Use of either recreational illicit drugs or performance-enhancing substances should be excluded.21

In addition to assessing general appearance and obtaining vital signs, a vigilant physical exam including auscultation for heart murmurs with special maneuvers can suggest the presence of congenital heart disease or HCM. All peripheral pulses should be examined as abnormalities can hint toward subclinical valvular or aortic diseases.

If a thorough history and physical reveals concerning findings (i.e. chest pain, shortness of breath, palpitations, any episode of exertional syncope), second tier testing should be performed. A twelve-lead ECG performed at rest may show depolarization or repolarization abnormalities such as left ventricular hypertrophy, Wolfe-Parkinson-White Syndrome (WPW), atrial fibrillation, ischemia, Brugada syndrome or LQTS.22,23 Although the sensitivity and specificity of ECG as a screening tool has improved, many high-risk causes of syncope may be electrocardiographically silent.24

Echocardiography may be used to confirm findings suggested on an ECG, and better assess cardiac structure (for example, to make a diagnosis of either HCM or ARVD). The athlete echocardiogram should also include imaging of the origin and proximal course of the coronary arteries. If structural disease needs to be better imaged, advanced tools such as Cardiac MRI or Cardiac CT can be used. Patterns of gadolinium enhancement can help to make a diagnosis of HCM, myocarditis, noncompaction cardiomyopathy, or previously undiagnosed infiltrative cardiomyopathies such as hemochromatosis or sarcoidosis.25,26

If resting ECG and echocardiography are both unrevealing, but an arrhythmic etiology for syncope is still suspected, exercise testing to invoke the arrhythmia may be helpful. The goal of such testing would be to best mimic the exercise during which the syncopal event occurred – a long distance runner may need to exercise a consistent pace over a long period of time, whereas a basketball player may need to engage in interval training exercises such as sprinting and resting. Close monitoring of ECG changes during the exercise and recovery periods would be crucial. Ambulatory cardiac event monitors should also be used, and the choice of monitor depends on the frequency of episodes. For very rare occurrences, an implantable loop recorder may be required to capture the heart rhythm during a syncopal episode. With respect of athletes, it is noteworthy that many event monitors require adhesive, which can be troublesome to manage in a group of subjects that are prone to active perspiration. Finally, EP testing and radiofrequency ablation can be performed to confirm and treat patients with suspected accessory pathways or ventricular arrhythmias.

A relatively new and potentially useful tool to evaluate patients is the cell phone application that functions as a monitoring device. This device allows “real-time” smartphone-based recording and transmission of tracings in symptomatic athletes to consultants.27 This technology has the potential to make quicker diagnoses and return athletes to back to activity.

Conclusion
Ultimately, the goals of an evaluation for the athlete with syncope are to determine whether underlying heart disease is present, and whether athletic activity can safely be continued. Missing or improperly treating a potentially life-threatening etiology of syncope can have devastating consequences, and the cost of misdiagnosing a benign condition as a dangerous or life-threatening one can lead to unnecessary restriction of activity as well as negative monetary and psychosocial ramifications. Although most causes of syncope in the athlete are benign, high profile stories such as the example above underscore the importance of performing a comprehensive evaluation beginning with a detailed history.

Figure 1: Approach to the evaluation of an athlete with syncope 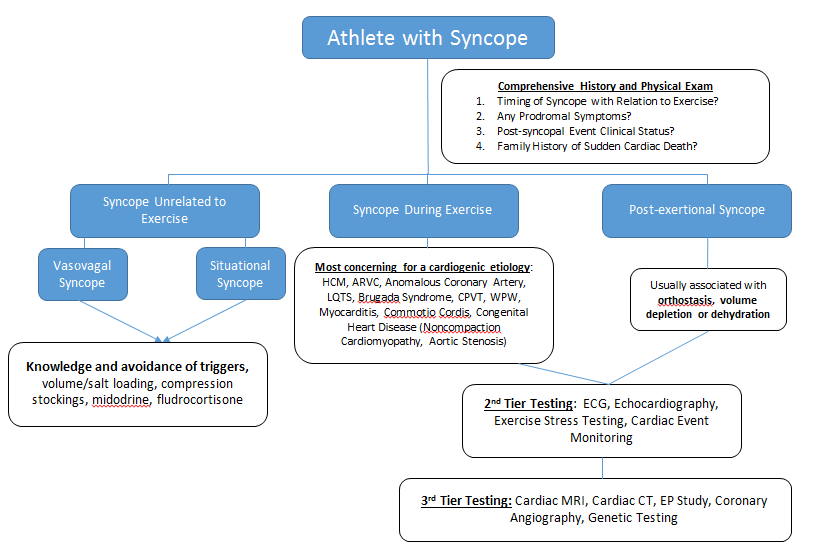 YOU ARE HERE: Home > Latest in Cardiology > The Syncopal Athlete