Building upon extensive epidemiological evidence linking insulin resistance to cardiovascular disease (CVD), the recent IRIS (Insulin Resistance Intervention After Stroke) trial adds substantially to our knowledge about the biological interplay between metabolism and atherosclerosis. This has been, to date, a highly controversial area, as most cardiologists know. For decades, investigators have found that resistance to insulin's metabolic actions (typically measured as hyperinsulinemia) is a strong and independent cardiovascular (CV) risk factor. However, because insulin resistance is also associated with a wide variety of other risk factors – such as obesity, hyperglycemia, hypertension, dyslipidemia, among others – its relative contribution to CVD has been extremely difficult to determine. Moreover, there are few data to suggest that ameliorating insulin resistance (typically through use of insulin-sensitizing drugs) provides a specific vascular advantage. To date, all studies testing this hypothesis have been conducted in patients with type 2 diabetes mellitus (T2DM), the vast majority of whom have insulin resistance. Indeed, it is the combination of insulin resistance with less than a fully compensatory level hyperinsulinemia that is the fundamental cause of this condition.

Thiazolidinedione (TZD) drugs, potent insulin sensitizers, have been available as anti-hyperglycemic agents since the late 1990s and have had a controversial history. Initially, they were felt to possess intrinsic properties that might prevent atherosclerosis, through both systemic insulin sensitization and direct effects on blood vessels via activation of the nuclear receptor peroxisome proliferator activated receptor gamma (PPAR-γ). In 2005, the PROactive (PROspective Pioglitazone Clinical Trial In Macrovascular Events) study suggested a modest (regular risk reduction 16%) benefit from pioglitazone in reducing major adverse CV events (MACE) in more than 5238 patients with T2DM and a prior history of CVD.1 Because the study's primary outcome, a broader composite that included peripheral vascular outcomes, was not significantly reduced in the pioglitazone group, PROactive was widely viewed as a 'negative' study, and the MACE outcome just hypothesis-generating. In addition, hospitalization rates for heart failure were increased in the active therapy group, diminishing in part the benefits on MACE.

The TZD field became more confusing when another member of this class, rosiglitazone, was suspected of increasing the incidence of CV events based on a meta-analysis of early phase 3 studies.2 These studies were designed to assess the glycemic actions of rosiglitazone and recruited relatively young, otherwise healthy patients with very low cardiac events rates. The drug was later felt by some to be exonerated in a large randomized clinical trial, RECORD (Rosiglitazone Evaluated for Cardiac Outcomes and Regulation of Glycaemia in Diabetes), which demonstrated neutrality on MACE in 4447 patients with T2DM.3 Additional questions arose from the negative results of the BARI-2D (Bypass Angioplasty Revascularization Investigation in Type 2 Diabetes) study, in which an 'insulin-sensitizing' approach to glucose lowering with metformin and, if needed, rosiglitazone, offered no definitive benefit on MACE in 2368 T2DM patients with stable coronary artery disease (CAD), as compared to an 'insulin-provision' approach, using a sulfonylurea and, if needed, insulin injections.4

Into the controversy surrounding the strategy of insulin-sensitization with TZDs, came the results of the IRIS trial, recently published in the New England Journal of Medicine.5 3876 patients with a recent ischemic stroke or transient ischemic attack (TIA) who were found to be insulin resistant (using the homeostasis model of assessment equation that incorporates fasting glucose and insulin levels) were randomized to pioglitazone or placebo (Figure 1). Major exclusion criteria included heart failure and diabetes. The primary outcome was fatal or non-fatal stroke or myocardial infarction (MI). Secondary outcomes included progression to diabetes (about one-half of participants had prediabetes at baseline). The results revealed that, over an average follow-up of 4.8 years , patients randomized to pioglitazone experienced a 24% relative risk reduction in fatal and non-fatal strokes or MIs (hazard ratio [HR] 0.76; 95% confidence interval [CI], 0.62 to 0.93; P=0.0070; absolute risk reduction 2.8%) (Figure 2). In subgroup analyses, there was no statistically significant heterogeneity in the response to pioglitazone for a variety of prespecified baseline subgroups, including age, gender, race, weight, and presence or absence of prediabetes. Patients randomized to pioglitazone also experienced a 52% relative risk reduction in diabetes less frequently than those assigned to placebo (HR 0.48; 95% CI 0.36 to 0.63; p<0.0001; absolute risk reduction, 3.9%.) 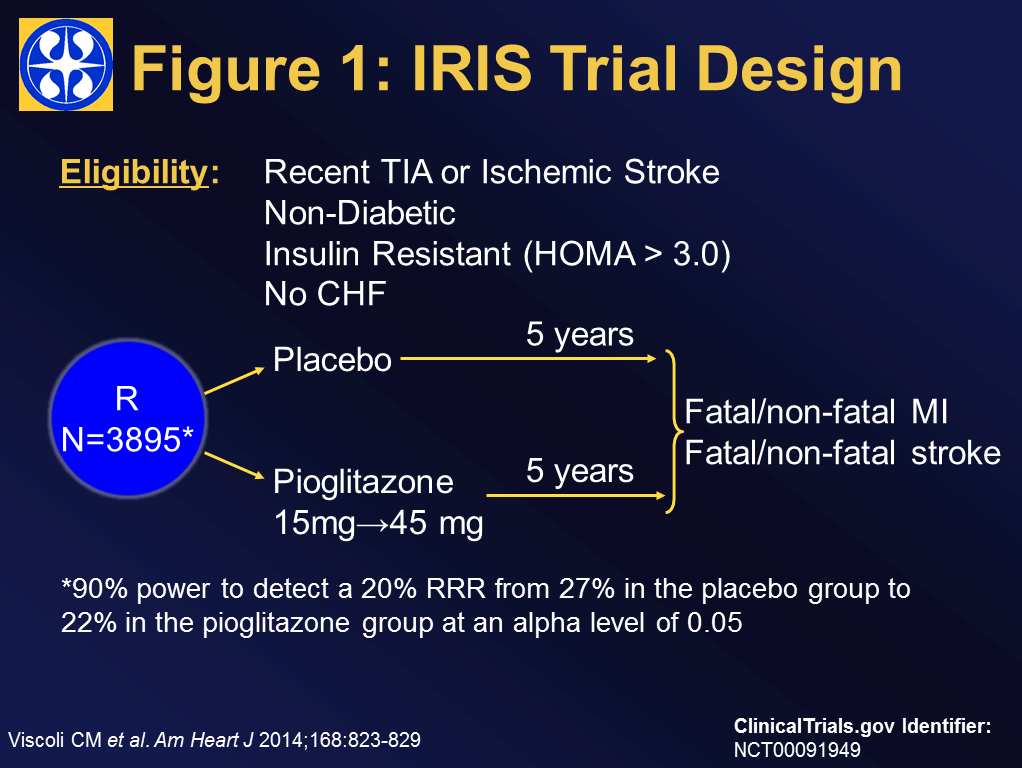 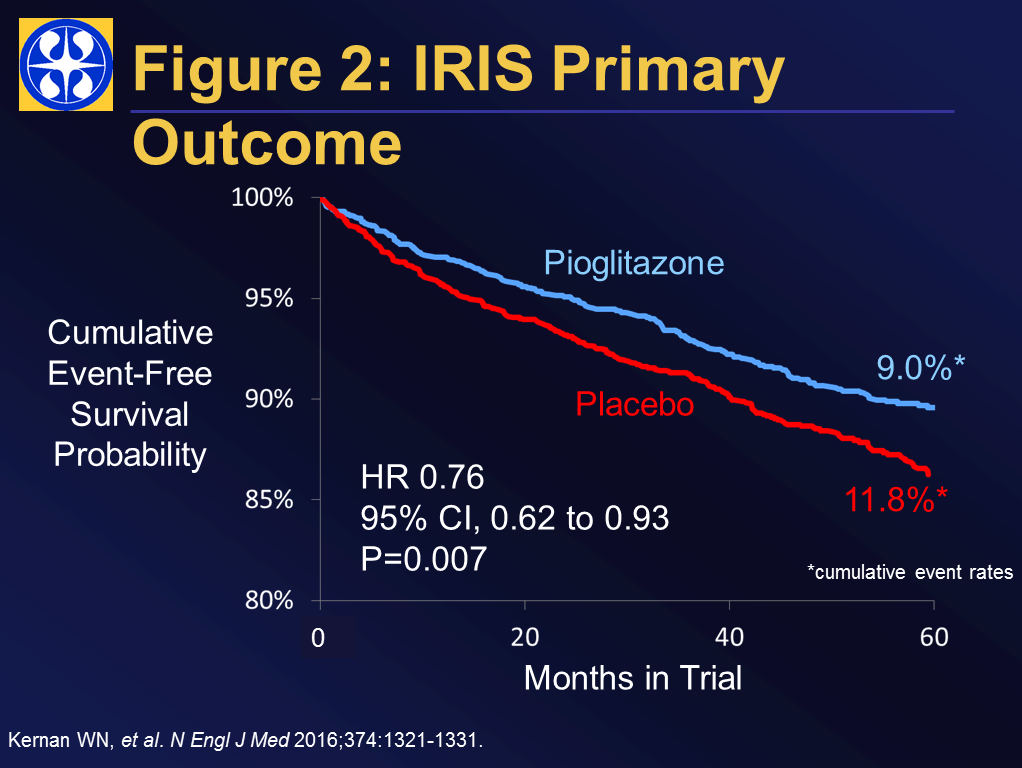 Adverse events associated with pioglitazone were similar to those noted in prior TZD trials. These included weight gain, edema, and an increased risk of bone fractures. There was no increase in hospitalization for heart failure however, probably because patients with heart failure at baseline were excluded and drug dosage was decreased if patients developed significant edema or weight gain. Overall cancer rates were similar as well.

The IRIS trial results raise several questions. What was ultimately responsible for pioglitazone's benefits in these non-diabetic individuals? We can only speculate. The IRIS investigators (as their name implies) set out with the understanding that insulin resistance was the culprit and that, by reducing it pharmacologically, CV events could be prevented. Yet pioglitazone also had other benefits, including modest reductions in glucose, insulin, systolic and diastolic blood pressure, triglycerides, and C-reactive protein. High-density lipoprotein (HDL) cholesterol also increased. Of course, these metabolic and hemodynamic changes are impossible to extricate from the TZD's insulin sensitizing effects. In addition, pioglitazone, as a PPAR-γ agonist, may have direct effects on the vascular endothelium and inflammatory cells that modulate the atherosclerotic process. To what degree might these actions explain the reductions in vascular events? With this specific drug, whose insulin-sensitizing properties are also mediated through PPAR-γ, it may be impossible to know.

The IRIS trial is important for several reasons. First, it adds to the evidence for the anti-atherosclerotic effects of pioglitazone in patients with diabetes, as had been suggested both by vascular imaging studies6,7 and the clinical results of the PROactive trial.1 It also now extends the CV benefits of pioglitazone to patients with vascular disease who have insulin resistance but have not reached the level of hyperglycemia to be characterized as diabetes. It should be noted that roughly half of patients with ischemic stroke have diabetes and, among the balance, nearly two-thirds have insulin resistance. Thus, in the field of cerebrovascular disease, where the majority of patients lack carotid disease amenable to surgery or percutaneous stenting, insulin resistance is highly prevalent and a potential target for intervention, together with statins and platelet inhibitors.

It might be noted that the vascular protection observed with pioglitazone is somewhat unique among glucose-lowering therapies, with the possible exception of metformin, which may have some CVD benefits, although the data in support of this notion are neither extensive nor robust and mainly from the pre-statin era.8 Recently, the sodium/glucose cotransporter 2 inhibitor empagliflozin was also found to decrease CV death and improved heart failure outcomes in patients with T2DM at high CV risk in the EMPA-REG OUTCOME (Empagliflozin Cardiovascular Outcome Event Trial in Type 2 Diabetes Mellitus Patients) trial.9 However, these effects did not appear to be driven by improvement in atherosclerosis since neither MI nor stroke were significantly reduced. Even more recently, the top-line results from LEADER (Liraglutide Effect and Action in Diabetes: Evaluation of Cardiovascular Outcome Results – A Long Term Evaluation) were announced – a large CV outcome trial involving the glucagon-like peptide(GLP)-1 receptor agonist liraglutide.10 The drug was reported to have reduced 3-point MACE, but no details were made available, and the actual data won't be presented until June 2016 at the annual Scientific Sessions of the American Diabetes Association in New Orleans. A similar announcement was even more recently made about another GLP-1 receptor agonist, semaglutide, in the SUSTAIN-6 trial (Trial to Evaluate Cardiovascular and Other Long-term Outcomes With Semaglutide in Subjects With Type 2 Diabetes).11

Second, IRIS shows that a strategy directed at improving insulin resistance can translate into a CV benefit. The effect appeared to be comparable for prevention of stroke and myocardial infarction, the latter of which constituted a third of the outcome events in the trial. This should re-open new avenues of research to discover other methods and mechanisms to improve insulin sensitivity for the treatment of both cerebrovascular and cardiovascular disease.

Third, this is the first time that a drug has been shown to reduce the risk of diabetes while simultaneously decreasing CVD events. Although these effects are not necessarily linked, the failure to demonstrate actual clinical benefit together with favorable glycemic effects has stymied efforts to garner a Food and Drug Administration-approved indication for metformin and other drugs for diabetes prevention.

For patients with ischemic stroke, the question of whether pioglitazone should now be considered an intervention on par with anti-platelet therapy, blood pressure control, and lipid management needs further contemplation by neurological clinical guidelines committees. We feel that this is a very reasonable option, since the relative risk reduction seen in IRIS is similar in magnitude to those reported with these now-standard preventative interventions. Notably, in IRIS, CV risk was reduced on top of these therapies, addressing true 'residual risk.' Of course, the side effect profile of the drug will need careful consideration. Proper patient selection and attempts at reducing the risk of side effects, especially bone fracture, should be made, perhaps with lower doses (i.e., 15, 30 mg).

In summary, the IRIS trial demonstrates that the TZD pioglitazone improves CV outcomes and prevents diabetes in insulin-resistant, non-diabetic patients with cerebrovascular disease. Whether the stroke community will adopt these findings as standard therapy will emerge over the next few years. IRIS may also reinvigorate interest in pioglitazone within the diabetes and cardiology communities.

YOU ARE HERE: Home > Latest in Cardiology > The IRIS Trial