Why Don't We Know Who Should Take an Aspirin to Prevent Cardiovascular Disease?

Thank you for visiting ACC.org. The item you attempted to access is outdated. For more current information on the topic, we encourage you to visit our Prevention Clinical Topic Collection page.

Recently, the United States Preventive Services Task Force (USPSTF) published recommendations on the use of aspirin for the primary prevention of cardiovascular disease (CVD) and colorectal cancer.1 The statement recommends initiating low dose aspirin therapy in adults aged 50-59 years old with a ≥10% 10-year risk of experiencing a CVD event who are not at increased risk of bleeding and have a life expectancy of at least 10 years (Grade B recommendation). They also suggest individuals 60-69 years of age who also have a ≥10% 10-year CVD risk discuss the risks and benefits of low dose aspirin with their doctor and consider taking an aspirin (Grade C recommendation). For individuals ≥70 or <50 years old, the recommendations state that the evidence is unclear regarding the use of aspirin for primary prevention of CVD and colorectal cancer. These recommendations have been met with controversy given the lack of consensus on this topic and differ with the European Society of Cardiology updated guidelines on cardiovascular prevention from 2012. The European recommendations did not endorse the use of aspirin for primary prevention due to lack of clear efficacy and a small but significant increase in major bleeding.2 In this article, we review the evidence on aspirin prophylaxis for CVD prevention.

Aspirin is one of the most extensively studied medications in the history of cardiovascular medicine. Yet, the role of aspirin for the primary prevention of CVD is currently unclear. Despite multiple trials, why is there a lack of clarity regarding who should and shouldn't take an aspirin to prevent a CVD event? The answer likely lies in the fact that the populations and outcomes of the primary prevention aspirin trials have changed over time.

From 1988-2005, six randomized clinical trials (RCT) evaluated the potential of aspirin to reduce heart attacks and strokes in individuals without known CVD (Table 1).3-8 The Physician's Health Study (PHS) randomized 22,071 US physicians to 325 mg of aspirin every other day versus placebo.3 In PHS, a substantial 44% relative risk reduction (relative risk [RR] 0.56, 95% confidence interval [CI] 0.45-0.70) was seen for fatal and non-fatal myocardial infarction [MI] in those taking aspirin alone compared to placebo. The British Doctor's Trial also studied the impact of aspirin for primary prevention in male physicians.4 The study was not placebo controlled and ~20% of the intervention group stopped aspirin due to potential side effects. The study showed significant reductions in transient ischemic attacks [TIA] by half in the aspirin group but no significant difference in rates of MI.

Four additional prospective trials followed over the next 15 years. The first two, the Thrombosis Prevention Trial (TPT) and Hypertension Optimal Treatment (HOT) Trial, targeted populations at greater risk of CVD and found significant reductions in ischemic heart disease and myocardial infarction respectively.5,6 The Primary Prevention Project (PPP) examined the effect of aspirin in 4495 men and women with one or more major cardiac risk factor, and showed a 44% relative risk reduction in cardiovascular death and 33% relative risk reduction in total cardiovascular events in the aspirin group.7 Finally, the Women's Health Study (WHS) studied aspirin in 39,876 female health professionals without known CVD.8 No significant decrease in the rate of overall cardiovascular events or MI was noted in the intervention group. However, the study included women at very low risk for CVD events (the rate of the primary outcome of major CVD events was <3% over 10 years). When stratified by age in WHS, women over 65 did have a significant reduction in major CVD events (hazard ratio [HR] 0.74 [95% CI 0.59–0.92]), including a reduction in non-fatal myocardial infarction (HR 0.66 [95% CI 0.44–0.97]). Unlike previous studies, a 17% decrease in the risk of stroke was noted as well (HR 0.83 [95% CI 0.69-0.99]).

Based on these data, in 2009, the USPSTF published tailored recommendations for men and women.9 Based on data from a gender-specific meta-analysis,10 the guidelines assumed a 32% reduction in CHD in men and a 17% reduction in stroke in women as well as varying risk for gastrointestinal bleeding with aspirin use according to age. Aspirin was encouraged for individuals whose risk of MI or stroke outweighed that of gastrointestinal bleeding. Guidelines from the American Heart Association (AHA) have followed a similar risk-based approach to the use of aspirin. The 2002 guidelines for primary prevention of CVD and stroke recommended that men with a ≥10% 10-year risk of CHD consider taking a daily aspirin.11 A 2011 update to the AHA guidelines for CVD prevention for women recommended aspirin use for women with known CVD (Class I), diabetes (Class IIa), or a ≥10% 10-year CVD risk (Class IIa for women ≥65 years old, Class IIb for women <65 years old).12 As noted above, the USPSTF recommendations discussed above now recommend selective use of low dose aspirin therapy for CVD and colorectal cancer prevention in adults aged 50-69 years with a 10-year CVD risk of 10% or greater who are not at an increased risk of bleeding and have a life expectancy of at least 10 years (Grade B recommendation for those aged 50-59 years and Grade C recommendation for those aged 60-69 years).

From 2008-2014, four additional RCTs have been conducted that studied aspirin for primary prevention in individuals presumed to be at high CVD risk (Table 2).13-16 The Prevention of Progression of Arterial Disease and Diabetes (POPADAD) trial included 1,276 adults with diabetes and an abnormal ankle-brachial index suggestive of peripheral arterial disease.13 Despite a study population of individuals at high CVD risk, there was no difference in the primary cardiovascular end-points with use of 100mg aspirin daily compared to placebo over a mean follow-up of approximately 6 years (HR 0.98; 95% CI 0.76 to 1.26). The Japanese Primary Prevention of Atherosclerosis with Aspirin for Diabetes (JPAD) trial also evaluated a high-risk population, including 2,539 individuals with type II diabetes without known CVD.14 Over a median follow-up of 4.4 years, there was no difference in the primary end-point of total atherosclerotic events (H.R. 0.80; 95% CI 0.58-1.10). Both the POPADAD and JPAD trials suffered from difficulties in recruitment and lower than expected event rates and subsequently were underpowered to evaluate their primary end-points.

How can the results of the first six RCTs be reconciled with the results of the four recent RCTs? There are several potential explanations. Differences in sample size, patient populations, study design, event rates, and aspirin dosage may all have contributed to the variable results among the different trials. However, potentially the most important difference is that the more recent trials have focused on total CVD events, as opposed to just MI and stroke, in populations with more optimally controlled risk factors.

From the standpoint of pathophysiology, aspirin should largely only be beneficial for those individuals destined to otherwise experience an event that involves arterial thrombosis. A number of factors may have led to a decrease over time in the number of atherothrombotic events relative to other cardiovascular events. The initial aspirin trials occurred at a time when cholesterol and blood pressure were not as well controlled as they were at the time of the most recent four aspirin trials and smoking rates were higher.17-19 Decreased rates of smoking, statin therapy, and improved blood pressure control have all been associated with a substantial reduction in MI.19-21 Studying patient populations with well controlled CHD risk factors may have removed the "low-hanging fruit" that was present in previous aspirin trials. To support this concept, prior data has shown the rate of MI has declined significantly over the past two decades, largely due to a decline in ST-segment elevation myocardial infarction,22 which is almost universally an atherothrombotic event. This decline in CHD has largely been attributed to better control of CHD risk factors.19 Recent data from a large electronic health record database of ~1.9 million adults showed that, in the modern era of medicine, the majority (66%) of initial CVD events were not MI or stroke.23 Additionally, older individuals in that database were even less likely to suffer an MI or stroke as their initial event. Given that the four recent trials included older individuals compared to the first six trials, it may be that the populations studied were at high CVD risk, though not necessarily high risk for atherothrombotic events.

As an example, in the JPPP, aspirin reduced the rate of non-fatal MI by 47%, but this did not significantly influence the primary outcome, as non-fatal MIs represented only a small portion of the total CVD events (207 total events in the placebo group, 38 [18% of total CVD events] were non-fatal MI).16 Conversely, in PHS, the sample size was 1.5 times higher compared to JPPP, but there were 5.6 times more non-fatal MIs (213 in the placebo group) over a similar follow-up duration (~5 years), and MI was the primary outcome of the PHS.3 It seems plausible that aspirin may have not lost its efficacy for preventing CVD over time, but rather it has recently been studied with a focus on total CVD outcomes in populations with low rates of the type of CVD events it is capable of preventing.

Figure 1: The Estimated Risks and Benefits of Aspirin in 4,229 MESA Participants Stratified by Coronary Artery Calcium Score and CHD Risk 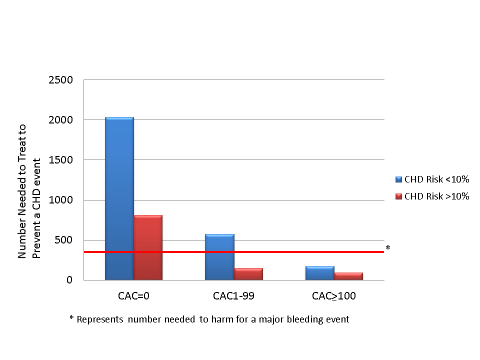 There is hope for clarity in regards to the risks and benefits of aspirin for primary CVD prevention in the modern era of medicine with four trials currently underway. The Aspirin to Reduce Risk of Initial Vascular Events (ARRIVE) trial has enrolled 12,000 patients with moderate CVD risk, a group not studied in previous trials.25 The Aspirin in Reducing Events in the Elderly (ASPREE) trial has 15,000 patients over 70 years old without known CVD enrolled, a group also not included in previous studies.26 To better determine what, if any benefit, aspirin plays in primary prevention of CVD in diabetic patients, the ongoing ASCEND trial (A Study of Cardiovascular Events in Diabetes) has enrolled over 15,000 patients with plans to complete the study within the next couple of years.27 Additionally, ACCEPT-D (Aspirin and Simvastatin Combination for Cardiovascular Events Prevention Trial in Diabetes) has a planned enrollment of 5,170 patients, evaluating the preventative benefit of aspirin plus statin versus statin alone.28 These trials should help determine if these particular populations at risk for CVD show sufficient benefit to warrant recommendation for aspirin despite the increased bleeding risk. It is important to note that any benefit or harm from aspirin therapy (even if small in magnitude) is important from a public health stand point as the population attributable benefit or risk could still be high given the large number of individuals potentially eligible.

Despite a large amount of data, the role of aspirin in primary prevention is currently unclear. Although ambiguity remains, the risk-based approach limiting aspirin use to middle-aged individuals endorsed by the USPSTF appears to be a rational approach given the current data available. Similar to the patient-provider discussion recommended by the 2013 ACC/AHA cholesterol guidelines,27 a thorough patient-provider discussion concerning the risks and benefits of aspirin is warranted for individuals without known CVD. A more personalized risk assessment using CAC may be beneficial in determining the likelihood of benefit from aspirin but further research is needed before such an approach can be broadly recommended. Fortunately, the results of the four large RCTs currently underway should be available in the next 2-3 years. Hopefully they will provide clarity in determining the optimal use of aspirin in the primary prevention of CVD.

This review was adapted from a recent review on aspirin for the primary prevention of CVD written by the same authors.29

YOU ARE HERE: Home > Latest in Cardiology > Why Don't We Know Who Should Take an Aspirin to Prevent Cardiovascular Disease?