"It's not the years in your life that count. It's the life in your years." – Abraham Lincoln

As Americans age and more baby boomers become "eligible" for a primary prevention ICD, it is important to ensure that treatments are appropriately and effectively applied to this growing segment of the population. Yet, enrollment of patients older than age 65 years in major primary prevention ICD trials is limited. A surprising 28% of Americans suitable for an ICD by conventional criteria are over age 79 years.1 Over 40% of primary prevention ICDs in the United States are placed in patients ≥70 years old. A review of over 115,000 Medicare patients in the National Cardiovascular Database ICD Registry revealed a mean age of 75 years at the time of ICD implantation, a trend that did not change between 2006 and 2010.2,9 Implantation rates are similar in other countries.4,5

The exceedingly difficult challenge for cardiologists is determining which patients are at sufficiently high risk of an arrhythmic death and would therefore derive benefit from an ICD (no one needs an ICD). Ideally, this population would have a low incidence of death from alternative causes, both cardiac and non-cardiac, as is the case for younger patients with channelopathies or hypertrophic cardiomyopathy. Unfortunately, risk stratification models have limited predictive accuracy. A large proportion (~25%) of the 326,000 annual sudden cardiac deaths that occur in the United States are asymptomatic patients without established risk factors such as recent myocardial infarction.6 Even in patients identified as "high risk" who receive ICDs, therapy may never be delivered. Between two-thirds and three-quarters of all implanted primary prevention devices have not delivered any shocks before battery replacement is required – between four and eight years.7

The most recent American College of Cardiology (ACC)/American Heart Association (AHA)/Heart Rhythm Society (HRS) appropriate use criteria assign a 4-5 rating ("may be appropriate care") for placement of a primary prevention ICD in an octogenarian who has class II-III heart failure.8 ICDs are generally not indicated in either class I or class IV patients. The 2008 guidelines by Epstein et al. also recognize the nuances of ICD placement in this population. They advise "greater weight in clinical decision-making among the elderly." Thus, level of evidence recommendations for primary prevention ICD placement do not incorporate age into management practice, but rather appropriately focus on only expected survival.9

No consistent benefit for primary prevention ICD therapy has been demonstrated in the elderly. Patients ≥75-years old with an ICD are more likely to die a non-cardiac death, since the incidence of sudden death decreases with advancing age. Despite lower rates of non-arrhythmic mortality in the elderly, ICD shocks are evenly distributed independent of age.10,11 In the real world, the average hospitalized heart failure (HF) patient is in their 70's or 80's with frailty and frequent concomitant cognitive dysfunction. As the elderly accrue comorbidities, the longevity benefit of primary prevention ICD placement may thus diminish.

The prescription of devices to septuagenarians, octogenarians, and nonagenarians is based on the original primary prevention trials, none of which were pre-specified for analysis of the benefits or risks in the elderly.

The cardiology community is familiar with the general details of the groundbreaking ICD trials –MADIT II (Multicenter Automatic Defibrillator Implantation Trial) and SCD-HeFT (Sudden Cardiac Death in Heart Failure Trial) are representative.12-14 MADIT-II showed that prophylactic ICD placement in patients with coronary artery disease and ejection fraction ≤0.30 decreased overall mortality by 5.6% compared with medical therapy (at two years; number needed to treat [NNT]=18 patients). SCD-HeFT enrolled all-comers, both ischemic and nonischemic patients with ejection fraction ≤0.35. At nearly four years of follow-up, ICD placement was associated with a 23% relative risk reduction compared with medical therapy (NNT=15 patients). The randomized controlled trials changed practice and demonstrated the lifesaving potential of ICD therapy. But the studies were highly selective and not necessarily reflective of real-world, modern-day practice where many patients are elderly with multiple chronic conditions. A substudy of the MESA population showed that just 1.95 of 1,000 enrolled patients would even be eligible to enter MADIT-II.15

The following are some disquieting facts about the primary prevention trials with respect to the geriatric population:

Post-hoc analyses suggest an inconsistent link between ICD implantation and improved survival in the elderly. When the "very high risk" patients ≥70-years old with comorbidities from MADIT II were studied, there was no mortality benefit for primary prevention ICD placement. Death for this cohort at two years approximated 50%, and the cause was predominantly non-arrhythmic.17 Similarly, a retrospectively-analyzed cohort from SCD-HeFT with the highest Seattle Heart Failure Model quintile for mortality risk (>20% annually) experienced no survival benefit. On average, this group gained only 1.5 months of life by device implantation.18 Alternatively, other studies and subgroup analyses suggest benefit of primary prevention ICD implantation in the elderly.19,20 Two comprehensive meta-analyses of the major primary prevention trials utilized distinct analysis techniques and age cut-offs, which may have contributed to their conflicting conclusions.21,22 Thus, the optimal approach in the elderly is uncertain. The decision to place a primary prevention ICD in an octogenarian should be individualized and based on available (albeit inadequate) data, life expectancy, risk of arrhythmic sudden cardiac death and risk of other competing causes for mortality, and patient and family preferences which incorporate their values and philosophy in the process of shared decision making. Even though the very elderly are more likely to suffer non-cardiac death, in the absence of renal insufficiency and advanced heart failure, life expectancy may be considerable.23,24 Therefore, devices should not be withheld from the elderly population based on age alone. There is building momentum for more judicious evaluation of each older adult patient on an individual level, with the incorporation of competing risk score models and shared decision-making.17,25-27

Since patients suffer the burden of an eventual ICD shock, what about their perspective on primary prevention device placement? Several studies indicate that physician allegiance to guidelines often trumps truly informed patient consent and shared decision making. Qualitative analyses show that patients do not recall discussions about treatment alternatives or psychiatric risks. Many patients do not learn the risks of ICD implantation until they experience a complication.28,29

Generally, patients overestimate the life-saving capability of an ICD by up to 500%.30 At the same time, they have a poor understanding of device function. Some patients believe that ICD regulates heart rate, whereas others consider it a "lifesaver from all causes of death."31 A revealing survey of patients with ICDs showed that 83% said they understood device function, yet 0% knew that its purpose was to terminate arrhythmia. Astoundingly, 93% of cardiologists surveyed in the same analysis believed that patients grasped how an ICD worked.32

Shared decision making is a dynamic process. Only one decision aid for primary prevention ICD placement was studied in a randomized pilot analysis. The researchers found that compared to patients who received usual care, the use of a decision aid significantly decreased patient conflict about ICD placement and improved their knowledge of devices.33 Because of the sheer volume of trial data and treatment options, a balance exists between evidence-based medicine and patient-centered care in cardiology (Figure 1). Shared decision making is increasingly important for the large portion of older adults with complex phenotypes. The experience of one institution with a patient-centered approach for primary prevention ICD placement reports that one third of heart failure patients accept a device, one third decline it, and one third think further on the topic.34 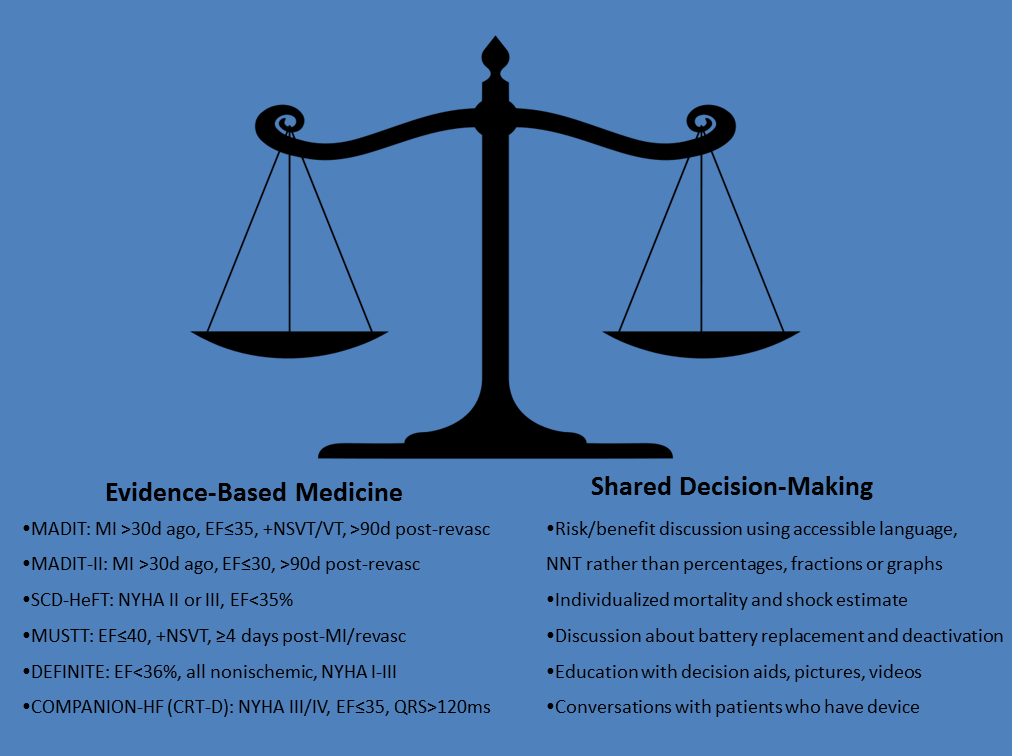 Unlike other life-saving therapies in the modern cardiac armamentarium, single-chamber ICDs do not improve quality of life. The longevity and symptomatic benefits of biventricular cardiac resynchronization, on the other hand, are not affected by advanced age.35 For each elderly patient, potentially increasing quantity of life by preventing a sudden death must be weighed against an individualized qualitative assessment of a patient's daily living that incorporates function, frailty, comorbid conditions, and core values.

Several leading electrophysiologists have called for a well-designed randomized controlled trial evaluating the effect of prophylactic ICD placement on all-cause mortality in the elderly population (patients ≥75). The ultimate results of such a trial might change practice, benefit patients, and decrease societal costs. More than anything, the results may hark back to the guiding principal of our calling: first, do no harm.

YOU ARE HERE: Home > Latest in Cardiology > Primary Prevention Implantable Cardioverter Defibrillator Placement in the Elderly