Human epidermal growth factor receptor- (HER2-) targeted therapies trastuzumab, lapatinib, pertuzumab, and ado-trastuzumab emtansine have revolutionized the management of breast cancer. The HER2 gene is overexpressed in 25-30% of breast cancers, leading to abnormally high levels of HER2 protein in malignant cells.1,2 HER2-positive breast cancer is aggressive and associated with decreased time to recurrence and survival.1

Trastuzumab is a humanized monoclonal antibody targeted against HER2 protein. In 2001, the first phase III clinical trial of trastuzumab in addition to standard chemotherapy for metastatic breast cancer showed longer time to disease progression, higher rate of objective response, lower rate of death at 1 year, longer survival, and 20% reduction in risk of death.3 Trastuzumab in conjunction with adjuvant chemotherapy in patients with surgically removed HER2-positive breast cancer was associated with decreased rates of recurrence, decrease in distant recurrence, and a 33% reduction in risk of death.4 The principle adverse event noted in these trials was cardiac dysfunction with an incidence of 27% in metastatic patients who received anthracycline, cyclophosphamide and trastuzumab and an incidence of New York Heart Association Class III or IV heart failure (HF) of 4.1% in the adjuvant setting.3,4 Cardiac dysfunction with trastuzumab is often asymptomatic but can be symptomatic.5,6 Trastuzumab is currently approved for use in adjuvant breast cancer, metastatic breast cancer, and metastatic gastric cancer.6 Per the package insert, trastuzumab can cause "left ventricular dysfunction, arrhythmias, hypertension, disabling cardiac failure, cardiomyopathy and cardiac death." Cardiac dysfunction, the most commonly seen side effect in clinical practice, is the focus of this brief review.7

Although the exact mechanism behind trastuzumab-induced cardiotoxicity has yet to be elucidated, it is thought that the neuregulin (NRG) ERBB pathway plays a key role. HER2 is one of the tyrosine kinases of the epidermal growth factor receptor or ERBB family. NRG is a ligand to the ERBB receptors, and NRG-ERBB signaling is involved in cardiac development and physiology.8 Spurred by development of cardiotoxicity with trastuzumab, the NRG-ERBB axis was found to be connected to the stress response of the heart.9 Patients with stable chronic HF have high levels of circulating NRG.10 Reduced ERBB signaling in the failing heart has led to work looking at the use of recombinant human NRG in patients with stable chronic HF.11 Although inhibition of the NRG-ERBB pathway in cardiomyocytes with trastuzumab leading to cardiac dysfunction seems plausible, further work is needed to prove this hypothesis.12

Incidence of Cardiotoxicity With Lapatinib, Pertuzumab, and Ado-Trastuzumab Screening and Management

Because not all HER2-positive breast cancer will respond to trastuzumab and because metastatic disease often eventually progresses, additional HER2-targeted therapies have been developed. Incidence of cardiotoxicity for all HER2-targeted therapies can be variable depending on the associated treatment regimen and definition of cardiotoxicity used. Therefore the rates in large trials are presented below to provide a sense of the scope of the issue.

Lapatinib is an oral reversible inhibitor of epidermal growth factor receptor HER1 and HER2 tyrosine kinases.16 In pooled analysis of 3,689 patients receiving lapatinib enrolled in 44 clinical trials, the incidence of a cardiac event was 1.6%. Study-defined cardiac events were asymptomatic (LVEF decrease ≥ 20% from baseline or below the institution's lower limit of normal without symptoms) or symptomatic (symptomatic congestive HF responsive to intervention with ejection fraction of 20-39% (LV systolic dysfunction [National Cancer Institute grade 3] or refractory/poorly controlled congestive HF with ejection fraction < 20% necessitating consideration for ventricular assist device, surgery, or heart transplant [National Cancer Institute grade 4]).17 Eighty-three percent of patients were asymptomatic.18

Ado-trastuzumab emtansine is an antibody-drug conjugate that targets HER2-positive tumors.23 In EMILIA (An Open-label Study of Trastuzumab Emtansine [T-DM1] vs Capecitabine + Lapatinib in Patients With HER2-positive Locally Advanced or Metastatic Breast Cancer), a phase III randomized, open-label trial comparing ado-trastuzumab with lapatinib + capecitabine to treat metastatic breast cancer, 97.1% of patients in the ado-trastuzumab arm and 93.0% of patients in the lapatinib + capecitabine arm maintained an LVEF ≥ 45% through treatment. Of the 481 patients in the ado-trastuzumab group, 1.7% developed an LVEF < 50% and at least 15% below baseline versus 1.6% in the lapatinib + capecitabine group. One patient in the ado-trastuzumab arm developed grade 3 LV systolic dysfunction.24 Additional HER2-targeted therapies, neratinib and afatinib, are available; however, their role in the treatment of breast cancer is still under investigation.16 Afatinib is approved for first-line treatment of metastatic nonsmall-cell lung cancer, and treatment should be stopped if patients develop symptomatic LV dysfunction; however, there are no recommended LVEF monitoring guidelines in the package insert.25

Given the risk of cardiac dysfunction, the Food and Drug Administration (FDA) recommends screening by echocardiogram or multigated acquisition at baseline and at intervals during treatment, which is outlined in Table 1. QTc should be monitored in patients on lapatinib. 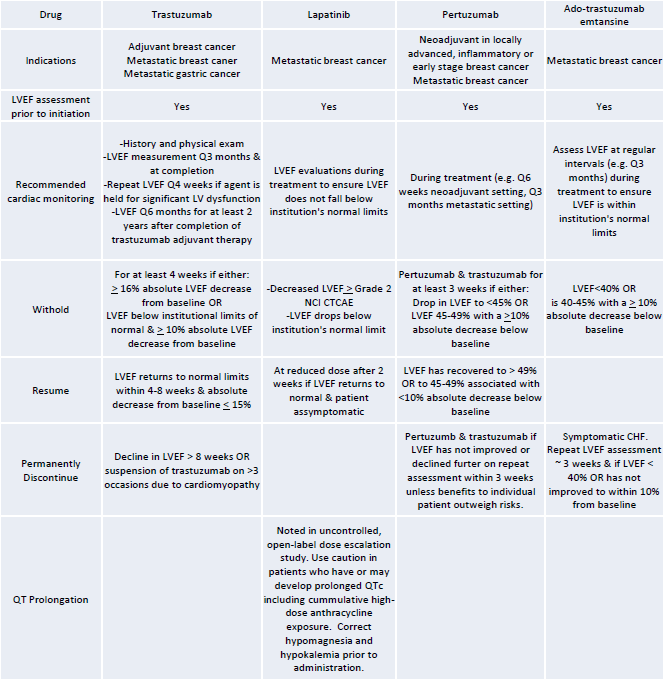 Biomarkers, particularly troponin I, and echo parameters such as strain imaging have been studied in an effort to predict trastuzumab cardiotoxicity.29,30 Consensus guidelines from the American Society of Echocardiography and the European Association of Cardiovascular Imaging for patients with cancer state that global strain is the optimal parameter for early detection of subclinical LV dysfunction.30 Randomized trials to assess the effectiveness of angiotensin-converting enzyme inhibitors (ACEIs), angiotensin receptor blockers, and beta blockers to prevent trastuzumab-induced cardiotoxicity are underway.31,32 Management of LV dysfunction resulting from HER2-targeted therapy has not been studied in large prospective clinical trials.33 ACEIs and beta blockers have been used in case series and small trials of patients with trastuzumab-induced LV dysfunction with promising results.34,35 It is not clear how long after treatment patients should remain on these drugs because this has also not been directly studied.7 In keeping with the 2013 American College of Cardiology Foundation and American Heart Association HF guidelines, patients who have received HER2-targeted therapies should be counseled that they have stage A HF.36

YOU ARE HERE: Home > Latest in Cardiology > Cardiotoxicity: An Unexpected Consequence of HER2-Targeted Therapies