Several of the most famous athletes in the world all have one thing in common; they have achieved extraordinary sport performances, such as earning several Olympic and/or World championship titles and world records, entering them in the very exclusive team of world's best athletes.

On the other hand, despite of sharing this similarity, it is easy to perceive that there are major differences among them. While some of these differences are quite obvious, such as sex, country of birth, sports modality and age in which they peaked at their sports' career, while from a medical point of view, there are some relevant differences that are usually less commented on or perceived. While on top of their careers, these athletes varied considerably in relation to morphological and physiological profiles, which was likely reflected in their aerobic and non-aerobic (flexibility, muscle strength/power, balance and body composition) physical fitness. Indeed, each athlete presents very specific attributes, that when associated with several years of high-quality training, are closely related to their outstanding sport performances.

Even without knowing published data about formal fitness test results, it can be easily assumed that maximum oxygen uptake and alactic anaerobic power of long distance runners would be substantially different than that of sprinters, and that swimmers and ice skaters would perform better in a flexibility test than basketball players at these top tiers. As a matter of fact, it is not uncommon in athletes of some sports modalities to have maximum oxygen uptakes that are just slightly above or similar to healthy non-athletes of the same age and sex.

However, there is an even more important medical issue; while it is well-known that a regular lifelong exercise is clearly linked to a better health status and a longer life expectancy, athlete's overall health could also be quite variable. While athletes are supposed to be very fit and healthy as compared to related sex and age-group populations, this is not always the case, and the relationship between sport achievement or performance and overall health seems to be far from perfect. One does not need to look for those weight lifters or judoists competing at highest weight categories to understand this imperfect relationship between sports performance and overall health. Indeed, by studying coronary risk factors among 88 (62 men) Brazilian athletes from different sports evaluated a few weeks before to take part at Seoul 1988 Olympic Games, it was found that dyslipidemia was highly prevalent, with about one third of them showing LDL-cholesterol above 130 mg/dL.1

So, practically saying, the first priority of an athlete is not to be healthy, but rather to perform remarkably well and, if possible, to win the race/game/competition. In this context, athletes resemble artists, acrobats, actors, dancers, and musicians, placing the competitive sports as one of the most important components of the entertainment industry. As a result, health promotion is usually placed in a lower position in the athlete's priority scale; the doping plague and sport injuries caused by overuse serve as a few examples of this relatively low priority for health in a fraction of athletes.

In this regard, it seems clear that when health is an issue, the major point is not to be or not to be an "athlete," but rather the type and the characteristics, mainly volume (Frequency x Duration) and intensity, of the exercise performed in the last years or even during the lifetime. It is the exercise component rather than the sports participation itself that will determine most, if not all, of the physiological and morphological adaptations and that will likely have potential clinical implications.

So, if the stereotype of athletes as reference models of being outstandingly physically fit even when health could be challenged, it seems to be appropriate to analyze the term "athlete" in a new perspective. Although the term "athlete" appears in more than 30,000 titles or abstracts among all PubMed-indexed papers, it remains unsure, where and when this term originated. Most likely, the term "athlete" comes from the Greek root "athlos" which means achievement, and therefore it is related to perform exceedingly well and, as previously discussed, not necessarily linked to health. Referring to a very popular, widely accessed source,2 it is stated that: "athlete is defined as a person who competes in one or more that involve physical strength, speed and/or endurance. Athletes may be professionals or amateurs". However, this definition is not only quite broad and unspecific, but also brings the use of descriptors added to the term: professionals and amateurs. Are these terms still meaningful in the current world of sport? In truth, according to PubMed, there are dozens of descriptors often added to the term "athlete" such as recreational, amateur, master, competitive, high-level, elite, etc., making the interpretation of the term "athlete" even more complex and inaccurate.

Revising the publications of the major scientific societies of cardiology, there are several official documents from the American Heart Association (AHA)3,4 and the American College of Cardiology (ACC)5-7 discussing medical issues related to athletes and/or sports. Both old and new versions of "Bethesda conference or guidelines" have utilized the following definition for competitive athlete: "One who participates in an organized team or individual sport that requires regular competition against others as a central component, places a high premium on excellence and achievement, and requires some form of systematic (and usually intense) training". On the other side of the Atlantic Ocean, the European Society of Cardiology (ESC), in one of their specific recommendations regarding sports participation,7 defined competitive athletes, as "individuals of young and adult age, either amateur or professional, who are engaged in exercise training on a regular basis and participate in official sports competition. Official sports competition (local, regional, national, or international) is defined as an organized team or individual sports event that, placing a high premium on athletic excellence and achievement, is organized and scheduled in the agenda of a recognized Athletic Association". While there are some similarities between the US and ESC athlete's definitions, ESC, differently from ACC, emphasizes the aspect of participation in competitions that are necessarily being organized by a recognized association or similar organization, and includes the outdated descriptors of amateur and professionals.

In parallel, it is undisputable the impressive growth of the number of adults participating in both new sport modalities (e.g. stand up paddle boarding and mixed martial arts), and in modalities such as cycling, swimming, and road/trail/adventure running mass events in recent years. As an illustration of these recent trends, the last three editions of the New York City marathon have had about 50,000 finishers,8,9 which is even more impressive when considering how difficult is to obtain a chance to run this particular marathon. In addition, some sports are obtaining more recognition and prestige in recent times, as evidenced by the incorporation of triathlon as a new sport event in Sidney 2000 Olympic Games, and golf that will return, after more than 100 years, at the Rio de Janeiro 2016 Olympic Games. On the other hand, it is remarkably surprising to note that the definition proposed for athlete by several editions of the "Bethesda guidelines" has remained unchanged in the last 30 years (1985 to 2015),5-7 not incorporating these most recent trends in sports practice.

In order to address the need for modernization and to standardize the use of the term "athlete", Araújo & Scharhag10 have recently proposed a working definition for medical and health sciences research for this term that may represent a step ahead of the previous definitions. According to the proposal, to be considered as an athlete, four criteria should be simultaneously fulfilled (Figure 1). Those individuals who do not meet these four criteria, but that are exercising or playing sports regularly, or even training and competing alone or with teammates and/or friends, should not be called athletes but rather exercisers. This would replace several other terms and descriptors, including the outdated expressions of amateur or recreational athletes. Substantially different from athletes, exercisers typically place health promotion (body esthetics included) as their first goal rather than performance, and may become a very interesting population to benefit from medical advice in order to optimize their positive and healthy results. Even more important, athletes represent a non-homogeneous and a very small percentage of the total population (surely less than 1%), while everyone, despite age and sex, should be stimulated by health professionals to become or to remain an exerciser. 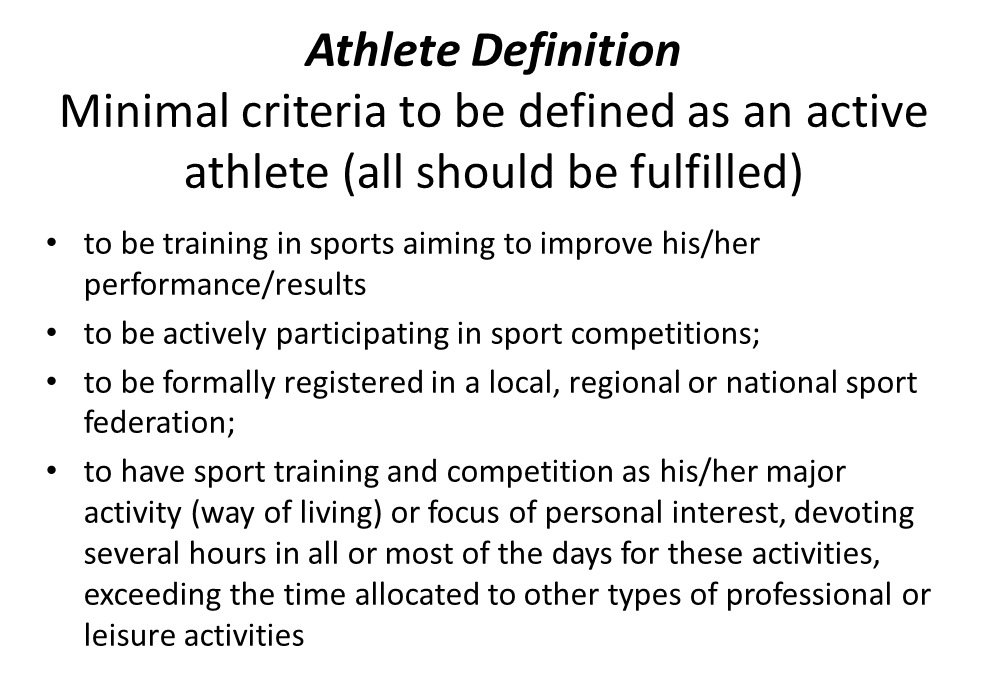 In summary, sports competitions are a fantastic show played by talented subjects called athletes. These athletes show extraordinary performance with high levels of one or more components of physical fitness. On the other hand, if health promotion is the primary concern, exercisers should be considered as the main target of medical and biological research, and we should learn more about the dose-effect relationship between exercise volume and health benefits that, within some still unknown upper limits, seems to be direct and practically linear. The growing interest shown by adults in sports and exercise will be shortly boosted by the Rio de Janeiro 2016 Olympic Games. It seems to be an optimal timing for the cardiologist to get a better understanding of the terms athletes and exercisers and their health implications.

YOU ARE HERE: Home > Latest in Cardiology > The Terms "Athlete" and "Exercisers"