In the United States, there are approximately 100 to 150 sudden cardiac deaths (SCD) during competitive sports each year.1 The estimated incidence of SCD among athletes versus non-athletes was found to be 0.44 per 100,000 person-years, and 13 per 100,000 person-years, respectively.1 Despite the higher risk of SCD in the general non-athlete population, SCD among athletes garners intense scrutiny by the media and represents an emotionally charged medical topic.1 Indeed, the incidence of SCD in National Collegiate Athletic Association (NCAA) athletes may be higher than previously thought.2

This August, more than 10,500 elite athletes will travel to Brazil and compete in the 2016 Summer Olympics. The International Olympic Committee Medical Commission recommends that the pre-participation evaluation of elite athletes include a medical history, a physical examination, and a 12-lead electrocardiogram (ECG).3 However, the Committee states that there is insufficient evidence to mandate any specific screening test for elite athletes.3 Likewise, a recent consensus statement on college student-athletes emphasized the importance of the pre-participation history and physical, emergency action plans, and further research on ECG screening.4

A competitive athlete is an individual who participates in an organized team or individual sport that requires regular competition against others, places a high premium on excellence and achievement, and requires systematic and usually intense training.5 All competitive sports are classified on the basis of two exercise components: endurance (the relative intensity of dynamic exercise, numerically described as the percentage of maximal aerobic power) and strength (the relative intensity of static muscle contractions, numerically described as the percentage of maximal voluntary contraction).6 Most competitive sports require both exercise components at different intensity levels.6

Endurance (isotonic or dynamic) exercise and strength (isometric or static) exercise result indifferent cardiovascular hemodynamics and produce different loading conditions for the left ventricle. In dynamic exercise, the athlete's left ventricle quickly relaxes and fills to a larger end-diastolic volume.6-8 Sympathetic stimulation causes increased contractility which leads to a decreased end-systolic volume, resulting in a significantly increased stroke volume.6-8 In static exercise, intense muscle contractions cause mechanical constriction of arteries which leads to compensatory increases in the arterial blood pressure, and in turn, the afterload.9,10 The athlete responds to the increased afterload by increasing his or her heart rate.6,9,10

In general, SCA occurs as a result of an acute transient trigger that leads to ventricular tachycardia and/or fibrillation in the setting of an underlying cardiovascular abnormality that forms an arrhythmogenic substrate (Figure 1).11 These triggers can include acute myocardial ischemia, abrupt hemodynamic changes, and increased sympathetic stimulation, all of which can be elicited during sports participation.11 Acute myocardial ischemia leads to contraction band necrosis, infarction, and ultimately scar formation that forms an electrically unstable substrate for ventricular tachyarrhythmias.11 Abrupt hemodynamic changes dramatically increase ventricular loading and introduce mechanical wall stress. which can also activate an arrhythmogenic substrate.11 Finally, increased sympathetic stimulation during exercise can activate or propagate both of these mechanisms.11 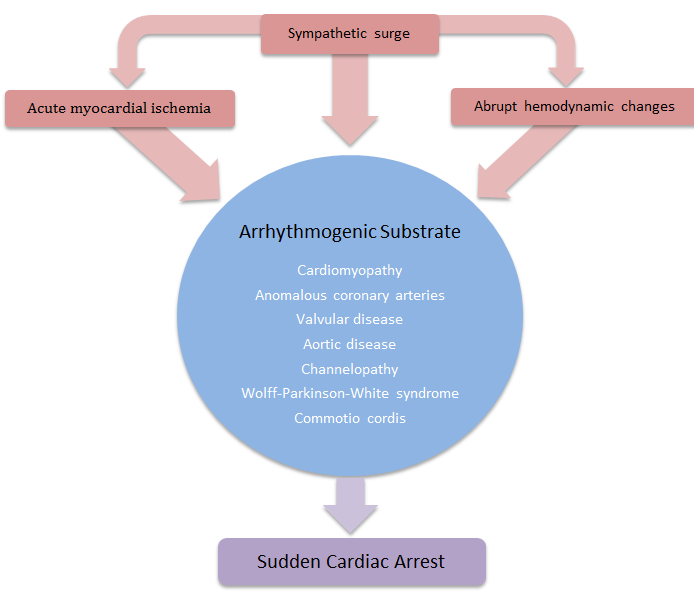 Sudden cardiac arrest (SCA) generally occurs as a result of an acute trigger that leads to ventricular tachycardia and/or fibrillation in the setting of an underlying cardiovascular abnormality that forms an arrhythmogenic substrate. These triggers can include acute myocardial ischemia, abrupt hemodynamic changes, and increased sympathetic stimulation, all of which can be elicited during sports participation.

In athletes who are at least 35-years-old, coronary artery disease (CAD) is considered the most common cause of SCD.5 In athletes younger than 35-years-old, genetic and acquired cardiac abnormalities are more common causes of SCD than CAD.5 The most common cardiac abnormalities can be divided into the following categories: right and left ventricular cardiomyopathy, anomalous coronary arteries, valvular disease, aortic disease, channelopathy, Wolff-Parkinson-White syndrome, myocarditis, and commotio cordis.

Hypertrophic cardiomyopathy (HCM) is the single most common non-traumatic cause of SCD in young competitive athletes in the United States.12,13 HCM is linked to more than 1,500 genetic mutations involving the cardiac sarcomere, which ultimately lead to disorganized cellular architecture.13-15 Bursts of silent microvascular ischemia result in ventricular myocyte death, replacement fibrosis, and subsequent formation of arrhythmogenic unstable substrate.13-15 As a result, patients with HCM have an increased risk of lethal ventricular tachyarrhythmias.13-15 The diagnosis of HCM can be established with the presence of left ventricular hypertrophy without chamber dilatation in the absence of another cardiac or systemic disease that can produce the observed magnitude of hypertrophy.13-15

Left ventricular noncompaction (LVNC) is an uncommon cause of SCD in young athletes.13,18,19 LVNC is linked to genetic mutations that lead to the arrest of the normal myocardial compaction process during embryonic development.13,18,19 The mechanism of SCD in LVNC remains unclear.13,18,19 LVNC can be diagnosed based on imaging evidence of left ventricular noncompacted trabeculations and inter-trabecular recesses on top of a layer of typical compacted myocardium.13,18,19 Distinguishing LVNC from hypertrabeculation can be challenging.20

Mitral valve prolapse (MVP) and aortic stenosis (AS) are well-established valvular causes of SCD in young athletes.12,24,25 MVP has been found to be associated with fibrosis of the papillary muscles and the left ventricular inferobasal wall, leading to formation of unstable substrate for ventricular tachyarrhythmias.24 The mechanism of SCD in young athletes with AS is unclear.25 Athletes with bicuspid aortic valves, rheumatic heart disease, or cardiomyopathy leading to subvalvular outflow obstruction are at increased risk for developing AS.25 Echocardiography remains the standard for the diagnostic evaluation of MVP and AS.

BrS represents a group of channelopathies that leads to abbreviated repolarization.29 BrS is characterized by a complete or incomplete right bundle branch block followed by coved ST-segment elevation in the right precordial leads.29 This ECG pattern can be intermittent, and can be unmasked pharmacologically with sodium channel blockers such as procainamide or flecainide.29 Exertional events are rare, but post-exercise vagotonia has been associated with exposing Type I Brugada ECG patterns.30-32

CPVT is characterized by bidirectional or polymorphic ventricular tachycardia that is reproducibly triggered by exercise or emotion.29 CPVT is linked to genetic mutations involving calcium release from the sarcoplasmic reticulum.29 The diagnosis of CPVT can be established with an exercise stress test; however, the screening ECG may be non-diagnostic.29

Wolff-Parkinson-White (WPW) syndrome is a rare cause of SCD, on the order of 0.15-0.24%.33-35 If a manifest (ventricular preexcitation seen on ECG) accessory pathway has a short anterograde refractory period, atrial tachyarrhythmias such as atrial fibrillation can cause a high rate of atrial impulses to be conducted to the ventricle, leading to high ventricular rates and possible deterioration into ventricular fibrillation.36 Unfortunately, the first presentation of "symptoms" can be cardiac arrest in previously undiagnosed individuals. The majority of patients with asymptomatic ventricular preexcitation have a benign course, but management remains the subject of much debate.33

Commotio cordis is defined as ventricular fibrillation and SCD that is triggered by a blunt, non-penetrating, innocent-appearing blow to the chest during ventricular repolarization without any damage to the chest wall or heart.37,38 The most common sport is baseball and the most common victim is an adolescent male.39 The mechanical force from the blow causes an acute increase in left ventricular intracavitary pressure and cell membrane stretching, which activates specific ion channels and produces electrically vulnerable substrate that subsequently leads to ventricular fibrillation.37,38

The main goal of screening competitive athletes for sports participation is to identify or raise suspicion of cardiovascular abnormalities that are potentially responsible for SCD on the athletic field.40 The 2015 Eligibility guidelines and 2016 Interassociation consensus statement recommend screening young competitive athletes with a comprehensive history and physical examination.4,40 Based on the history and physical examination, the provider can decide if further diagnostic evaluation is warranted. When cardiovascular abnormalities are identified, the next step for the physician is to make eligibility and disqualification decisions for athletes, or to seek expert consultation.40

The use of screening ECGs in preparticipation screening for young competitive athletes remains controversial.40 Although an ECG has the potential to detect an underlying cardiovascular abnormality, routine ECG screening for competitive athletes has failed to demonstrate any mortality benefit.40,41 Certain conditions, such as HCM, ARVC, LQTS, BrS, WPW syndrome, and myocardial ischemia, can be detected on ECG, but others such as LVNC, anomalous coronary arteries, valvular disorders, and aortic root dilatation, may not. Furthermore, routine ECG screening can prove to be costly and produce false-negative or false-positive results.40 The 2015 Eligibility guidelines provide a class IIb recommendation for the use of a screening 12-lead ECG or echocardiogram in the evaluation of young healthy people.40 The ECG may improve the sensitivity for detecting conditions associated with SCD, but a major concern has been the number and impact of false positives. With each iteration of athlete screening criteria, the false positive has improved and may be as low as 4.2%.42 An update to the Seattle Criteria is expected in 2016.

SCA during sports participation usually occurs as a result of acute ischemia, abrupt hemodynamic change, and/or a surge in sympathetic stimulation in the presence of an underlying cardiovascular abnormality. In competitive athletes younger than 35-years-old, these cardiovascular abnormalities include cardiomyopathy, anomalous coronary arteries, valvular disease, aortic disease, channelopathy, Wolff-Parkinson-White syndrome, and commotio cordis. The goal of screening competitive athletes for sports participation is to identify these cardiovascular abnormalities that can potentially cause lethal ventricular tachyarrhythmias and SCD. Current guidelines emphasize screening competitive athletes with a comprehensive history and physical examination. Screening competitive athletes with ECGs remains controversial but improvements in training and criteria continue. Regardless of one's stance on screening, emergency action plans must be in place and routinely reviewed at any athletic facility.43 Calls for large registries of ECG data and outcomes provide opportunities to improve our effort to evaluate and protect all athletes.4,44

YOU ARE HERE: Home > Latest in Cardiology > Sports Participation and Sudden Cardiac Arrest