The quantification of regurgitant volume is crucial to the management of mitral valve disease. The most recent American College of Cardiology & American Heart Association guidelines for the management of valvular heart disease place significant emphasis on differentiating severe from non-severe mitral regurgitation (MR) when deciding which patients are appropriate candidates for mitral valve surgery.1 Magnetic resonance imaging (MRI) is ideally suited to the accurate noninvasive quantification of MR.

Qualitatively, mitral regurgitant jets can be detected using steady-state free-precession (SSFP) imaging but are better appreciated on fast spoiled gradient echo imaging (Video 1). Caution should be taken in using the jet size to determine the severity of MR because the size of the jet can differ depending on the sequence used to acquire the image. Quantitative methods to assess mitral regurgitant volume are preferred when using MRI. As discussed below, mitral regurgitant volume is calculated as the difference between left ventricular stroke volume (LVSV) and forward flow.

MRI has been accepted as a gold standard for noninvasive measurement of left and right ventricular size and function. The excellent reproducibility and accuracy of MRI for quantifying ventricular volumes is based on 1) the high contrast between the ventricular blood pool and the ventricular muscle using SSFP imaging (Figure 1) and 2) the ability to choose the imaging plane, eliminating the need for geometric assumptions employed in other imaging techniques. LVSV and right ventricular stroke volume (RVSV) are quantified using segmentation of the ventricles from the base to the apex of the heart in both end-diastole and end-systole (Figure 1). A potential error can occur by either including an extra basal slice or excluding the basal slice. This error can be accounted for using commercially available software that allows tracking of the basal slice using an orthogonal long axis view as a reference. 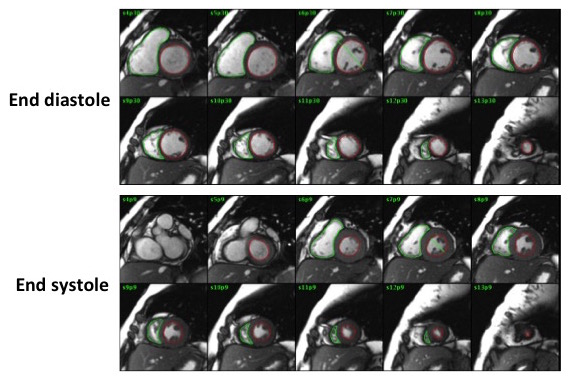 Phase contrast imaging applications of gradient pulses induce phase shifts in moving protons that are directly proportional to their velocity along the direction of the gradient. Phase contrast is capable of measuring velocities, and thus flows, in the "through plane" orientation. The imaging plane is acquired perpendicular to the desired vessel. This technique allows measurement of blood flow in vessels and is particularly suited to measuring flow in the ascending aorta (Video 2) and the main pulmonary artery (PA) (Video 3).

In patients without cardiac shunts, either the PA or aortic (Ao) flow can be used to quantify forward flow. Limitations of phase contrast imaging include the need to choose the appropriate velocity encoding, deviation from the perpendicular plane due to cardiac or respiratory motion, and magnetic field inhomogeneities. Studies have shown that phase contrast imaging is a highly accurate method for measuring stroke volumes.2

An advantage of MRI is the ability to check for errors in quantification of ventricular stroke volumes and Ao and pulmonary flow. This is important because precise quantification of mitral regurgitant volumes depends on accurate stroke volumes and forward flows. In a patient without a cardiac shunt, the Ao and PA flows are similar. And if there is no valvular regurgitation, then the LVSV = RVSV = PA flow = Ao flow. For example, if there were a technical issue or mistake of right ventricular segmentation, then the RVSV would not be equal to the LVSV and forward flows; this would alert the physician. In truth, a slight difference in stroke volumes and forward flow is to be expected because the cardiac output does differ slightly from beat to beat, and the numbers derived are averaged over several beats.

Figure 2 shows common scenarios encountered in clinical practice. Scenario A illustrates a patient with no valvular disease and no cardiac shunt. In this scenario, the stroke volumes and forward flows should all be similar. If one of the measures differs, then technical error or error in ventricular segmentation should be suspected. Scenario B illustrates a patient with MR. In this scenario, we expect the RVSV and the forward flows to be similar, with the LVSV being larger because it contains both the forward flow and the mitral regurgitant volume. In scenario C, the patient has both MR and tricuspid regurgitation (TR). In this scenario, both the RVSV and LVSV will be larger then the forward flows. Tricuspid regurgitant volume can be calculated as follows:

Mitral regurgitant volume can be calculated as follows: 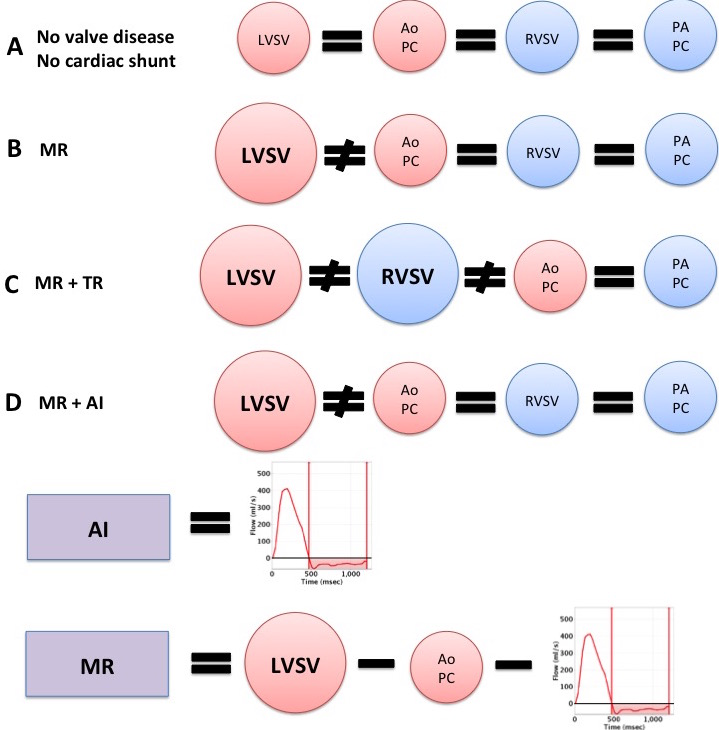 As discussed above, mitral regurgitant volume is calculated as the difference between the LVSV and forward flow. This method has been shown to be highly reproducible.3 In a recent prospective multicenter study, mitral regurgitant volume calculated by this method was highly predictive of negative remodeling of the left ventricle after surgery, providing validation for the accuracy of this method.4 MRI has several strengths as a method of assessing mitral regurgitant volume, including highly accurate ventricular stroke volumes, the ability to measure forward flow in the aorta and PA, and internal methods to check that quantification is accurate. For these reasons, MRI is an important tool in the evaluation and management of patients with valvular heart disease.

YOU ARE HERE: Home > Latest in Cardiology > Quantification of Mitral Regurgitation Using MRI