The term "amyloidosis" refers not to a single disease but to a collection of diseases in which a protein-based infiltrate deposits in tissues as beta-pleated sheets. The subtype of the disease is determined by which protein is depositing; although dozens of subtypes have been described, most are incredibly rare or of trivial importance. This analysis will focus on the main systemic forms of amyloidosis, both of which frequently involve the heart.

The vast majority of cardiac amyloidosis is caused by one of two proteins: light chains or transthyretin. A discussion of the presentations and specific treatments for these two subtypes follows.

The most commonly diagnosed form of systemic amyloidosis is AL amyloidosis. A full discussion of the pathophysiology of the disease is beyond the scope of this review, but a brief working understanding is helpful to best understand the treatment options.

Plasma cells reside primarily in the bone marrow and produce a large array of antibodies. Antibodies are composed of heavy chains and light chains. When a plasma cell becomes clonal (essentially becoming malignant), it and its clones usually produce a clonal antibody and a clonal excess of the light chain associated with that antibody. At that point, there are three possible outcomes:

AL amyloid deposits can occur in virtually any organ, and the pattern of organ involvement varies from patient to patient (Table 1). Common extracardiac sites of involvement and associated manifestations include the kidneys (albuminuria and potential renal failure), liver (elevations in alkaline phosphatase and potential hepatic failure), gastrointestinal (GI) tract (dysphagia, constipation, malabsorption, and GI bleeding), tongue (macroglossia), and nerves (peripheral neuropathy and autonomic dysfunction). It is rare for patients to have clinical involvement of all of these organ systems.

Transthyretin (prealbumin) is an abundant protein produced by the liver and functions as a transporter of thyroxine and retinol. It normally circulates predominantly as a homotetramer, with a small amount of transthyretin circulating in monomeric form. The monomeric form of transthyretin is prone to misfold and gradually deposit as amyloid deposits.

Two main subtypes of ATTR amyloidosis exist: wild-type ATTR and mutant ATTR. In the case of wild-type ATTR, the transthyretin protein is the normal (nonmutated) protein, and over a period of decades gradually deposits as amyloid deposits. Although small amounts of deposits can occur in the soft tissue (causing carpal tunnel syndrome) and vasculature, the primary pathologic deposits occur in the heart.

Patients with mutant ATTR were born with a pathologic mutation in the transthyretin gene, leading to accelerated amyloid deposition. Mutant ATTR most commonly deposits in the heart and/or nerves, with the pattern of deposition largely dependent on the mutation. In the United States, by far the most commonly encountered mutation is the V122I mutation; it is present in 3-3.5% of individuals of African descent. The exact penetrance of the mutation is unknown and is likely <10%,1 but this is almost certainly a severely underdiagnosed form of HF in the African-American population.

Definitive diagnosis of amyloidosis requires biopsy. The abdominal fat pad is sometimes chosen as a site due to the ease and low morbidity of the procedure. However, this site suffers from relatively poor sensitivity; even in positive cases, there are frequently inadequate amyloid deposits to definitively subtype the disease (ATTR, AL, etc.). As such, the general practice at Stanford Amyloid Center is to biopsy the clinically involved organ (i.e., the heart in suspected cardiac amyloidosis) because this practice has a nearly 100% sensitivity/specificity and virtually always allows for definitive subtyping (Figure 1). Subtyping can be performed by immunofluorescence or sent to a referral laboratory for mass spectrometry. If there is any doubt about the diagnosis based on immunofluorescence staining, mass spectrometry should be performed. 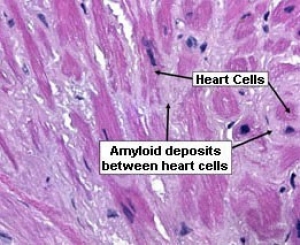 Adjunctive laboratory tests for AL amyloidosis include assaying for other organ dysfunction (e.g., proteinuria, alkaline phosphatase) and directly measuring the circulating light chains. Free light-chain assays can be helpful in both evaluating the likelihood of the diagnosis prior to biopsy (e.g., normal circulating light chains make a diagnosis of AL amyloidosis unlikely) and monitoring disease response to chemotherapy.

In ATTR amyloidosis, it is important to offer genetic testing for the transthyretin gene. The presence of a pathologic mutation can affect clinical trial options, predict sites of organ involvement, and have relevance for family members.

In either form of cardiac amyloidosis, the dominant imaging finding is the appearance of cardiac "hypertrophy." The "hypertrophy" on imaging represents amyloid fibril deposition rather than myocyte hypertrophy/hyperplasia, which explains why ECG voltages are decreased rather than increased. Importantly, the degree of hypertrophy/voltage reduction is variable, so in a patient without classic imaging findings, it is important to maintain clinical suspicion in the appropriate circumstance (e.g., unexplained HF in a patient with myeloma or unexplained HF in a patient with proteinuria/macroglossia).

Cardiac amyloidosis causes abnormal patterns of late gadolinium enhancement on cardiac magnetic resonance (CMR) in both global transmural and subendocardial distribution.2,3 Elevations in myocardial spin-lattice relaxation times on CMR are frequently encountered as well.4 Strain echocardiography typically reveals basal>apical-predominant impairments in strain.5 Although the degree of CMR and strain abnormalities has been correlated with patient outcomes, to date it is difficult to confidently know that they add incremental information over other prognostic grading systems.6 In addition, the patterns are not specific enough for diagnosing amyloidosis to obviate the need of making a definitive biopsy-proven diagnosis.

Various staging systems have been proposed for AL amyloidosis, with the majority focusing primarily on the degree of cardiac involvement. A widely utilized staging system published in 2004 relied solely on two cardiac biomarkers: troponin (T or I) and N-terminal pro-B-type natriuretic peptide.7 Staging was graded as 1, 2, or 3 based on whether 0, 1, or 2 biomarkers were elevated. The staging system successfully produced distinct survival curves, though overall survival remained dismal in all 3 arms, with median survival of 26.4, 10.5, and 3.5 months in Stages 1, 2, and 3, respectively. A revised staging system was published by the same group in 2012, adding the absolute difference in free light chains as a third variable, thus separating patients into 4 stages.8 In addition to adding more accuracy to the stages, this system demonstrated improvements in overall survival across all stages, with median survival of 94.1, 40.3, 14, and 5.8 months for Stages 1, 2, 3, and 4, respectively. With ongoing improvements in chemotherapy since the study period of even this second manuscript, it is likely that survival has continued to substantially improve.

Treatment of AL amyloidosis follows two parallel paths: treating the consequences of the organ dysfunction while concomitantly attempting to slow progression of the disease by killing the clonal plasma cells (and hence reducing the circulating pathologic light chains) with chemotherapy.

The cardiac-specific treatment of all forms of amyloidosis largely involves volume management (diuretics/salt restriction) and arrhythmia management. Neurohormonal antagonists typically used in HF are often poorly tolerated and counterproductive. In particular, beta-blockers, angiotensin-converting enzyme inhibitors, and angiotensin-receptor blockers often lead to hypotension (due to autonomic dysfunction and the presence of a small left ventricular cavity with an inability to augment stroke volume in response to vasodilation), and beta-blockers often exacerbate bradyarrhythmias. Digoxin binds to amyloid fibrils, leading to the potential of digoxin toxicity even with normal circulating levels, and should generally be avoided.

Pacemakers are frequently needed due to a high prevalence of conduction disease (particularly in ATTR amyloidosis). Atrial fibrillation is common and often poorly tolerated, frequently necessitating cardioversion and/or antiarrhythmic therapy (most commonly amiodarone). Ventricular arrhythmias and sudden cardiac death are common as well. Historically, implantable cardioverter-defibrillators (ICDs) were discouraged due to the poor prognosis associated with cardiac amyloidosis, but more recent data suggest that ICDs can be an effective part of the management strategy in patients with a reasonable prognosis from cardiac amyloidosis (>1 year).9

Because ATTR amyloidosis is not a malignant process, chemotherapy has no role. Although there are no currently approved disease-modifying medications for ATTR amyloidosis, multiple agents have been studied and/or are in late-phase trials. These include the following:

The paradigm of cardiac amyloidosis has changed markedly in the last decade, with greater numbers of patients being diagnosed and with marked improvements in therapeutic options. Diagnostic clues include unexplained ventricular hypertrophy with inappropriately low ECG voltages and unexplained HF occurring with characteristic dysfunction of other organs. Definitive diagnosis requires biopsy and is crucial for definitively subtyping the amyloid deposits (e.g., AL and ATTR).

For AL amyloidosis, treatment should begin promptly with chemotherapy (our preferred option) or auto-stem-cell transplant. For ATTR amyloidosis, patients should be referred for evaluation for enrollment in one of the ongoing clinical trials. Cardiac management primarily involves diuretics/rhythm management. For select patients, ICD implantation or cardiac transplantation should be considered.

Because the disease typically requires multi-specialty expertise, we recommend referral to a high-volume amyloid center for consultation whenever possible.

YOU ARE HERE: Home > Latest in Cardiology > Cardiac Amyloidosis