Cardioprotective Interventions: Where Are We?

Cardiotoxicity is a well-recognized complication of chemotherapeutic agents. Cardiotoxicity encompasses multiple effects including subclinical injury, overt left ventricular (LV) dysfunction, and congestive heart failure (HF). The development of cardiotoxicity has important implications both during and subsequent to cancer therapy. Cardioprotective strategies include primary prevention and secondary prevention in those high-risk patients with subclinical cardiotoxicity. This review focuses on cardioprotective agents used in conjunction with cancer therapy. Radiation-induced heart disease and the treatment of cardiotoxicity are beyond the scope of this review.

Primary Prevention in Patients Without Cardiotoxicity or Dysfunction

Dexrazoxane, an intravenous iron chelator, is the only pharmacologic agent that is approved by the Food and Drug Administration to prevent cardiotoxicity in patients receiving anthracyclines.15 In the United States, it is approved for use in women with metastatic breast cancer who have received a cumulative dose of 300 mg/m2 and who will continue to receive doxorubicin to maintain tumor control; it is not approved by the Food and Drug Administration for use in pediatric patients. Among adults with advanced breast cancer receiving anthracyclines, dexrazoxane, as compared with placebo, reduced both asymptomatic LV dysfunction and clinical congestive HF.16-18 A single study demonstrated an increased risk of dexrazoxane-associated secondary malignancy in pediatric Hodgkin's disease, but this finding has not been replicated in other studies.19-21

Both randomized and observational data suggest a cardioprotective role for beta-blockers and renin-angiotensin inhibitors (ACEi and ARBs) in patients receiving chemotherapy.4-10 For example, three recent randomized trials tested whether primary prevention using these agents during chemotherapy can reduce cardiotoxicity and preserve LVEF.1-3

The OVERCOME (Prevention of Left Ventricular Dysfunction with Enalapril and Carvedilol in Patients Submitted to Intensive Chemotherapy for the Treatment of Malignant Hemopathies) trial randomized patients with hematologic malignancies to receive or not receive (control) a combination of enalapril and carvedilol; 80% (72 out of 90) received anthracyclines prior to or during the study.1 At 6 months, there was no change in LVEF in the intervention group but a reduction of LVEF in the control group, resulting in an absolute difference between groups of –3.1% by echocardiography and –3.4% by cardiac magnetic resonance. The PRADA (Prevention of Cardiac Dysfunction During Adjuvant Breast Cancer Therapy) trial randomized patients with breast cancer receiving anthracyclines +/– trastuzumab using a 2x2 factorial design to metoprolol or candesartan versus placebo.2 Candesartan, but not metoprolol, preserved baseline LVEF; LVEF declined –0.8% in the candesartan group versus –2.6% in the placebo group. Similarly, the MANTICORE 101 (Multidisciplinary Approach to Novel Therapies in Cardiology Oncology Research) study randomized early stage human epidermal growth factor receptor-positive breast cancer patients 1:1:1 to perindopril, bisoprolol, or placebo prior to the initiation of trastuzumab.3 Bisoprolol, but not perindopril, prevented the decline in LVEF compared with placebo; however, the primary endpoint of prevention of LV remodeling based on LV end-diastolic volume index was not met.

Other published studies have failed to demonstrate a benefit from these agents. For example, in one study of 125 lymphoma patients treated with anthracyclines, neither metoprolol nor enalapril were associated with preservation of LVEF.7

Statins and Other Agents

Statins appear to have cardioprotective effects during chemotherapy based on a small randomized trial and observational studies.11 In a trial including 40 patients with hematologic malignancies receiving anthracyclines, patients were randomized to atorvastatin 40 mg daily versus placebo for 6 months.13 Compared with baseline value, the control group had a significant reduction in mean LVEF (p < 0.0001); there was no change in the statin group. During the study, one patient in the statin group had an LVEF decline to <50% compared with 5 patients in the control group (p = 0.18). In an observational study of 628 women with breast cancer, 67 (10.7%) receiving uninterrupted statin therapy were propensity matched 1:2 with 134 controls.12 Incident HF was significantly lower in the statin group. Notably, the proportion of patients in the statin group concurrently receiving ACEi or beta-blockers was more than double that of the control group; however, the benefit of statins was maintained after multivariate adjustment for co-administration of other potentially cardioprotective medications.

There are limited data testing other primary prevention approaches. For example, single-center studies have suggested a protective effect of spironolactone, which may be mediated by antifibrotic and antioxidant effects.14

There are important limitations to these studies, including small sample size, low event rate, and short follow-up duration. The modest effect on ejection fraction in the treatment groups must be examined in the context of the relative lack of data regarding the natural history of asymptomatic LV dysfunction in patients with cancer receiving cardiotoxic agents. Large, multicenter studies that include hard clinical endpoints such as symptomatic HF and cardiovascular death are needed.

An alternate strategy involves the use of sensitive imaging or biomarker-based approaches to detect subclinical cardiotoxicity prior to the development of overt cardiac dysfunction and to integrate this information into decisions regarding cardioprotective strategies. Significant data exist for several novel and established biomarkers of subclinical cardiac injury among patients receiving chemotherapy. These include the use of both serum and imaging biomarkers.

The use of echocardiographic myocardial strain has emerged as a noninvasive imaging marker for the early detection of cardiotoxicity.24,25 In 81 patients with breast cancer treated with anthracyclines and trastuzumab, Sawaya et al. demonstrated that abnormal myocardial strain (defined by global longitudinal strain > –19) preceded the onset of LV dysfunction.26 Observational data further suggest that a secondary prevention strategy utilizing speckle-tracking strain indices can be implemented for the monitoring of subclinical cardiotoxicity. Among 159 patients receiving anthracyclines +/– trastuzumab or trastuzumab alone, initiation of a beta-blocker in patients with reduction of myocardial strain value by ≥11% led to reversal of cardiac dysfunction and normalization of strain (p < 0.001).22 The multicenter, randomized SUCCOUR (Strain Surveillance During Chemotherapy for Improving Cardiovascular Outcomes) trial is designed to determine if a strain-based strategy for initiation of cardioprotective therapy is superior to one based on LVEF.27

Serum biomarkers can be used to identify individuals with subclinical cardiac damage who are at risk of developing cardiac dysfunction. An elevation of serum troponin during anthracycline-based chemotherapy has been established as a robust predictor of future cardiac dysfunction.28 One study evaluated using abnormal troponin elevations detected during therapy to identify high-risk patients for initiation of cardioprotective therapy.23 In that study, among 473 patients receiving high-dose chemotherapy, 114 (24%) had an elevated troponin I during treatment and were randomized to receive or not receive enalapril starting 1 month after the completion of chemotherapy; LVEF was similar between groups at time of randomization. At 1 year, 25 (43%) of the control group compared with none in the ACEi group met the primary endpoint of an LVEF decline of >10% from baseline to below 50%. Patients with sustained troponin elevation had greater LVEF reduction. Additionally, the use of multiple biomarkers or the combination of echocardiographic strain with troponin improves cardiotoxicity prediction.26,29

Monitoring strategies using a combination of biomarkers and imaging to detect cardiotoxicity have been suggested by both oncology and cardiology societies.30,31 In individuals receiving cardiotoxic chemotherapy, the National Comprehensive Cancer Network has incorporated relevant LVEF monitoring recommendations into its treatment guidelines.32 It has also published recommendations for survivors of cancer who received previous anthracycline chemotherapy.33 These emphasize early recognition of cardiac toxicity with the goal of preventing the development of clinical, symptomatic HF. Its algorithm begins with clinical evaluation; cardiac imaging (e.g., echocardiography) is recommended in patients with symptoms and signs of HF or asymptomatic survivors with cardiovascular or oncologic risk factors. The American Society of Echocardiography also has consensus recommendations in which it defines cancer therapeutics-related cardiac dysfunction as a decrease in the LVEF of >10% points to a value <53% and suggests the use of speckle-tracking global longitudinal strain and troponin for detection of subclinical cardiac dysfunction (Figure 1). 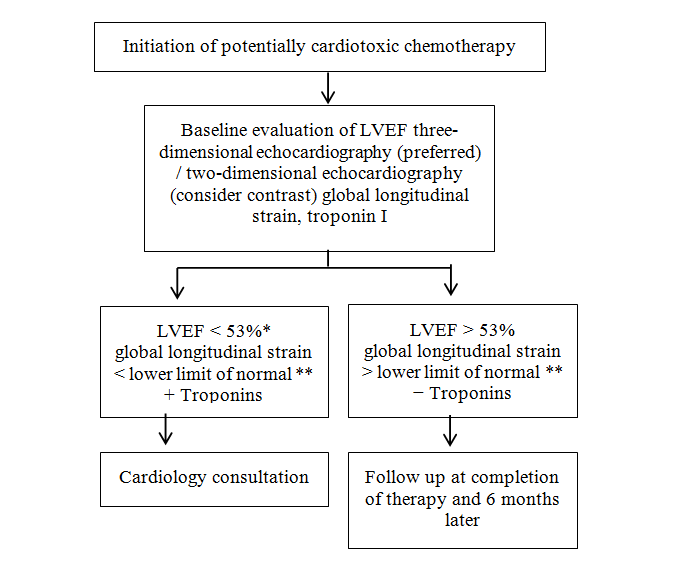 *Consider confirmation with cardiac magnetic resonance.
**Refer to the American Society of Echocardiography guideline for normal global longitudinal strain values based on vendor, gender, and age.28
Modified from Expert Consensus for Multi-Modality Imaging Evaluation of Adult Patients During and After Cancer Therapy.30

All consensus documents acknowledge that there remain significant knowledge gaps in the detection and prevention of cardiotoxicity. Despite promising data suggesting that abnormal myocardial strain is a predictor of subsequent cardiac dysfunction, its role in guiding the initiation of therapy and reducing cardiac endpoints is not yet validated. Furthermore, optimal screening intervals and duration have not yet been defined.

Treatment of HF and LV Dysfunction

At the onset of clinical HF or a significant decline in LVEF (e.g., American Society of Echocardiography definition is a decrease in LVEF of >10% points to a value <53%), HF therapies such as ACEi and beta-blockers should be initiated. This strategy is supported by society consensus recommendations and observational data suggesting that cardiac events are higher in patients with LV dysfunction after therapy.33,34 In this population, the initiation of ACEi and beta-blockers can improve cardiac function. For example, in one large observational study that followed 2,625 patients receiving anthracyclines at a single center, cardiotoxicity defined as an LVEF decline of >10% to <50% developed in 226 (8.6%) patients.35 Initiation of standard HF therapy including ACEi and beta-blocker resulted in full recovery of LVEF in 11% and partial recovery of LVEF in 71%.

Cardioprotective interventions in patients receiving chemotherapy can be applied to all individuals receiving cardiotoxic medications (primary prevention) or individuals with subclinical cardiac dysfunction (secondary prevention). To date, beta-blockers, renin-angiotensin inhibitors, and statins have demonstrated promising results in randomized and observational studies evaluating their efficacy in both primary and secondary prevention. Data concerning use of biomarkers and imaging to detect subclinical cardiac dysfunction have further advanced the field. Current cardioprotective intervention strategies are limited by knowledge gaps pertaining to the optimal frequency of monitoring and the benefit of initiating cardioprotective therapies in patients with subclinical LV dysfunction. Additional large, multicenter studies are required to address feasibility, effectiveness, and cost.

YOU ARE HERE: Home > Latest in Cardiology > Cardioprotective Interventions: Where Are We?