Causes and Prevention of Ventricular Remodeling After MI

Adverse ventricular remodeling after myocardial infarction (MI) is a process of regional and global structural and functional changes in the heart as a consequence of loss of viable myocardium, exuberant inflammatory response, increased wall stress in the border zone and remote myocardium, and neurohormonal activation (Figure 1). The notation of "adverse" refers both to the detrimental changes from a hemodynamic standpoint and to the negative prognostic implications of the process. 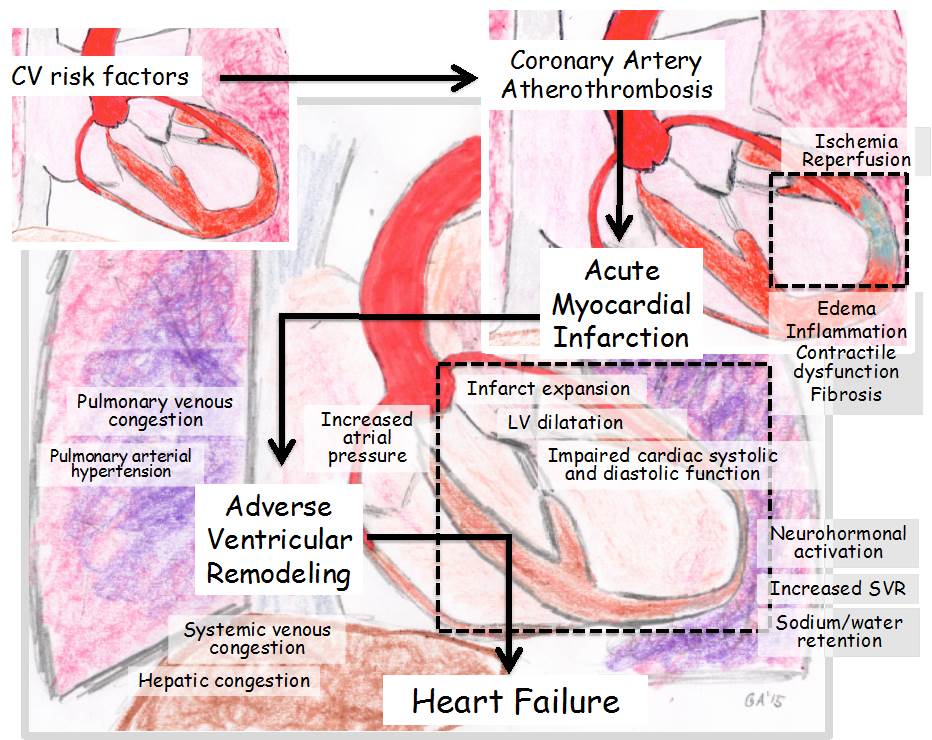 Acute coronary artery atherothrombosis is the most common cause of acute MI. The ensuing ischemia induces an acute injury to the myocardium and initiates an intense inflammatory response. The acute hemodynamic effects of MI are amplified by structural and functional changes in the infarct border zone and remote myocardium and by a systemic neurohormonal and inflammatory response. Impaired cardiac systolic and diastolic function and increased filling pressures with pulmonary and systemic venous congestion lead to the syndrome of heart failure (HF).

Infarct size is the single most important predictor of adverse ventricular remodeling, and it is linearly dependent upon the amount of myocardial salvage by reperfusion ("time is muscle"). As such, lack of timely reperfusion due to ineffective treatment or delayed presentation portends an unfavorable prognosis. Impaired tissue-level reperfusion ("no reflow") relates to microvascular obstruction persisting despite epicardial coronary artery patency and limits the overall benefit of revascularization (Figure 2). Measuring infarct size is therefore recommended in patients with MI in order to identify those at increased risk of adverse ventricular remodeling. Several methods have been studied over the years. The simple use of serial 12-lead electrocardiograms identifies the subjects at highest risk; the measurement of persistent ST-segment elevation (if present) and development of new Q waves are semi-quantitative methods to estimate infarct size. The area-under-the-curve for markers of myocardial necrosis (i.e., cardiac-specific troponin I or T or creatine kinase myocardial band) provide an accurate measure of the amount of myocardium lost. Transthoracic echocardiography is widely used in patients with MI, with the number of segments showing wall motion abnormality providing an estimate of infarct size. Cardiac magnetic resonance imaging with the use of delayed gadolinium enhancement (also able to quantify the no-reflow area, if present) provides a more accurate measure and is considered the gold standard.

Figure 2: Effect of Reperfusion on Adverse Remodeling and HF 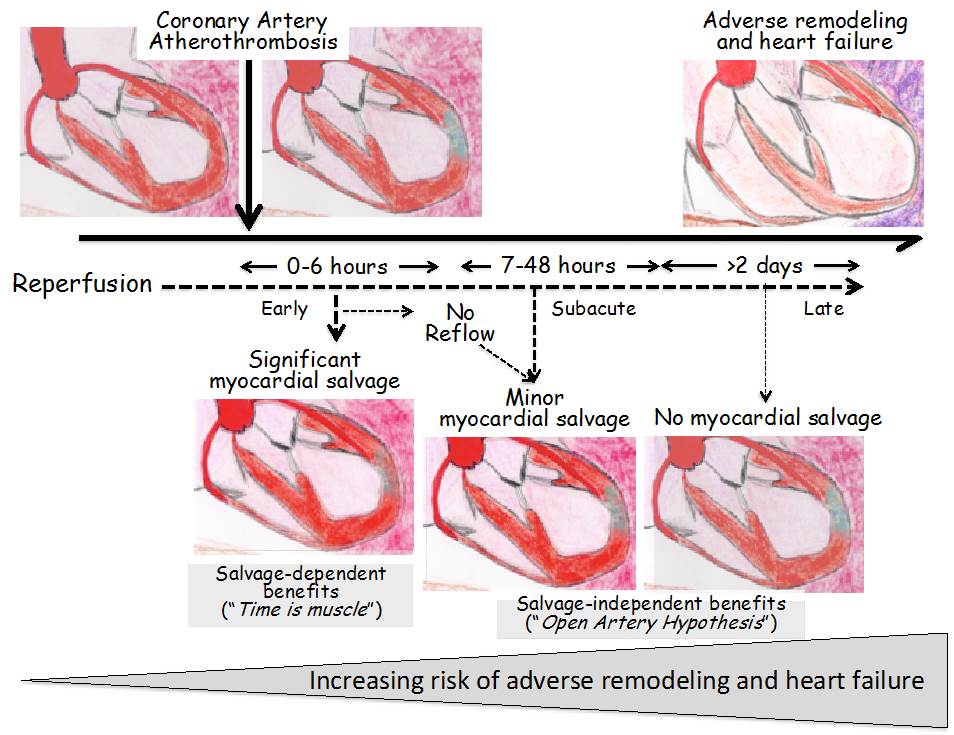 An increase in end-diastolic volume occurs early in MI to accommodate a larger preload and compensate for the acute decrease in contractility. However, according to the law of Laplace, wall stress increases with the increase in chamber size; therefore, the larger the LV volumes are, the more likely is the progression to adverse ventricular remodeling and HF ("dilatation begets more dilatation"). Echocardiography and cardiac magnetic resonance imaging provide easy noninvasive measures of volumes. Sex-related differences exist in ventricular remodeling after MI. In men, dilation prevails over hypertrophy, thus resulting in an eccentric phenotype and leading to a further increase in wall stress and neurohormonal activation that results in progressive dilatation and systolic dysfunction with worse long-term outcomes. In women, hypertrophy prevails over dilatation, thus resulting in concentric hypertrophy; this pattern may exacerbate acute hemodynamic compromise and shock, but, beyond the acute phase, the limited dilatation overall portends a better long-term prognosis.

The acute decrease in ventricular contractility and increase in intracavitary pressures trigger the release of local and systemic neurohormones, such as angiotensin II, aldosterone, and norepinephrine. Neurohormonal activation induces a tachycardic and vasoconstrictor response to help maintain cardiac output and maintain perfusion of vital organs that threaten the healing myocardium in the border zone through further increases in wall stress and oxygen demand. The imbalance in perfusion/demand and the neurohormonal and pro-inflammatory milieu promote cardiomyocyte diastolic and systolic dysfunction and transition from pro-hypertrophy to pro-apoptosis signaling. This process results in further loss of viable myocardium and further stimulation of the compensatory mechanisms, resulting in a vicious cycle that leads to adverse ventricular remodeling (Figure 1).

Larger infarcts lead to greater neurohormonal activation, and the greater the neurohormonal activation, the more likely is the progression toward adverse ventricular remodeling. The simple measure of blood pressure and heart rate can identify patients at increased risk of adverse remodeling: higher heart rates reflect increased adrenergic tone and portend a poor prognosis, whereas high diastolic blood pressure, especially if associated with a decreased pulse pressure, reflects an elevated systemic vascular resistance (SVR) due to systemic vasoconstrictors and also portends a worse prognosis. Measurement of plasma neurohormones is rarely used in clinical practice.

Treatment of MI should therefore be aimed at 1) prompt reperfusion, 2) prevention or treatment of no-reflow, 3) reduction of infarct size, 4) reduction of wall stress, and 5) inhibition the neurohormonal response.

Great progress has been made in optimizing reperfusion strategies. Reduction of time to reperfusion, initiation of treatment prior to hospital arrival, and intensification of antiplatelet and anticoagulant therapies all appear to favor more complete reperfusion, prevent no-reflow, and prevent adverse remodeling. However, clinical trial data supporting a reduction of infarct size with adjuvant pharmacotherapy in the reperfusion era are scant. The METOCARD-CNIC (Effect of Metoprolol in Cardioprotection During an Acute Myocardial Infarction) trial is the one large clinical trial in Spain showing that metoprolol 15 mg intravenous in 3 divided doses 2 minutes apart prior to angioplasty reduced infarct size by approximately 20% and improved ventricular remodeling. Confirmatory results are awaited.

Neurohormonal blockade is the cornerstone of guideline-directed medical therapy for the prevention of adverse remodeling in patients with MI (Figure 3). Data from clinical trials prior to the current reperfusion era showed that the use of angiotensin-converting enzyme inhibitors significantly reduced mortality in patients with MI. However, the benefits seen across the different blockers, including angiotensin receptor blockers and aldosterone blockers, were limited to those patients already showing signs of adverse remodeling prior to initiation of therapy (i.e., LV enlargement or systolic dysfunction). The patients with small infarcts and preserved global systolic function tend to do well independent of treatment. Treatment with angiotensin or aldosterone blockers is therefore recommended for those patients with MI and either reduced global systolic function, symptoms of HF, anterior location of ST-segment elevation MI, or diabetes. Beta-adrenergic blockers, on the other hand, are recommended to reduce the arrhythmic and ischemic risk in all patients with MI. Whether beta-adrenergic blockers also prevent adverse ventricular remodeling is controversial, and systematic use of higher doses of beta-adrenergic blockers during MI increases the risk of hypotension and cardiogenic shock. 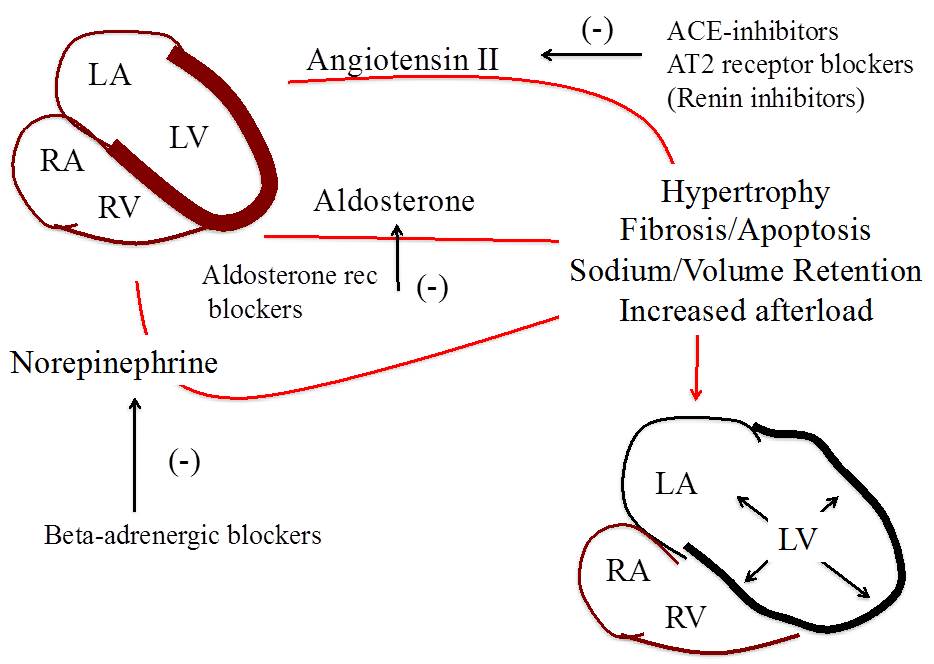 The initial tissue injury and the hemodynamic consequences initiate a systemic neurohormonal activation characterized by the activation of the renin-angiotensin-aldosterone and the noradrenergic sympathetic nervous systems. Although these responses have been evolutionary conserved to preserved mean arterial pressure during hypotension (and thus may be, in part, necessary for the immediate survival in patients with acute cardiogenic shock), the same neurohormones promote the adverse ventricular remodeling and HF 1) by directly promoting further cardiomyocyte loss and promoting increased cardiac stiffness, and 2) indirectly by promoting sodium and volume retention by the kidneys and increasing afterload acting on the SVR. Neurohormonal blockade in patients with acute MI is shown to prevent adverse remodeling, prevent HF, and prolong survival.

A reduction in wall stress during MI has been proposed to reduce infarct expansion and acute dilation. Despite the lack of randomized clinical trials showing improved outcomes with the intra-aortic balloon pump (IABP), it is commonly used in patients with acute MI and hypotension and shock as a rapidly available means of LV support. By displacing an additional 34-40 ml volume of blood from the aorta to the periphery in diastole, the IABP serves as a secondary means to increase flow to the tissue, maintaining adequate perfusion pressure in diastole to the periphery and the myocardium. As such, the IABP increases mean arterial pressure while decreasing SVR and reducing wall stress. Abiomed's percutaneous continuous axial flow LV assist device is inserted in the LV through a femoral or axillary access. The device suctions blood from the LV and ejects it in the ascending aorta with a capacity of up to 2.5, 3.8, or 5.0 l/min according to the size of device used. The device is also used as means of mechanical support for patients with MI and shock. The effects of mechanical circulatory support on the ventricular remodeling following MI have not been characterized. Considering that these devices unload the LV while supporting coronary and systemic perfusion, it is proposed that a more favorable remodeling is promoted. The invasiveness and associated risks and costs of the devices, however, limit the use to patients with cardiogenic shock during MI. Preclinical studies with cardiac diastolic constraining devices or percutaneous ventricular restoration devices have shown promising results. Clinical trials in patients with MI, however, are lacking.

The heart is an organ of very limited regenerative potential. Treatment with growth factors or stem cells may enhance the regenerative potential of the heart during MI. Pilot clinical trials have shown the feasibility and safety of growth factors and bone marrow-derived mononuclear cells, but the clinical impact on ventricular remodeling with current strategies appears small, and the evidence of an effect on clinical outcomes is lacking.

YOU ARE HERE: Home > Latest in Cardiology > Causes and Prevention of Ventricular Remodeling After MI