Utility of PET and MRI in AS

Aortic stenosis (AS) is characterised both by progressive narrowing of the aortic valve and by how the ventricle adapts and ultimately decompensates in the face of the increased pressures placed upon it.1 Modern noninvasive imaging can provide complementary information to that provided by standard echocardiographic techniques with respect to both processes. In particular, positron emission tomography (PET) can inform about disease activity in the valve leaflets, and cardiovascular magnetic resonance (CMR) can inform about the hypertrophic response of the left ventricle (LV) and in particular the development of myocardial fibrosis as patients transition toward heart failure.

PET is a powerful imaging modality that can inform about the activity of specific disease processes as they occur in the body. In particular, two tracers with proven safety records in oncology imaging have been used to investigate AS. The inflammation tracer 18F-fluorodeoxyglucose (18F-FDG) is a glucose analogue that labels cells with high metabolic requirements, including vascular macrophages.2 18F-fluoride is a bone tracer, which passively binds to hydroxyapatite crystals to form fluoroapatite. It has been shown to preferentially bind to regions of newly developing microcalcification (beyond the resolution of computed tomography [CT]), which have a higher surface area than established macroscopic deposits (Figure 1).3 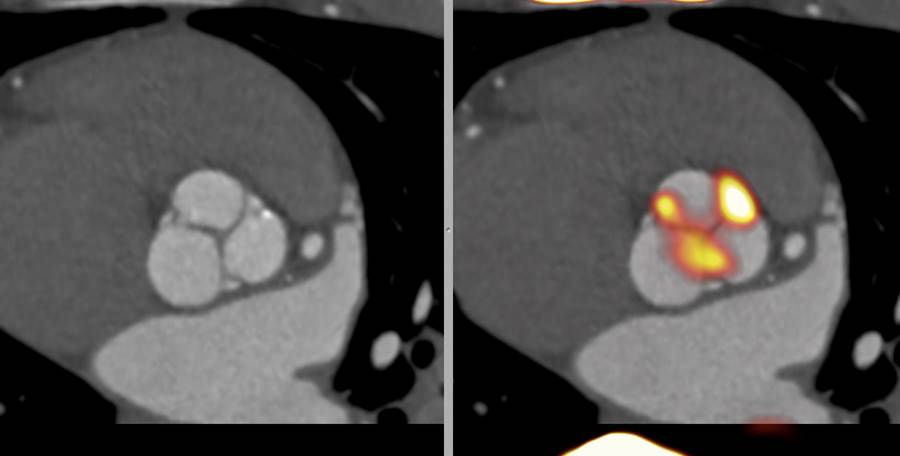 An "en-face" contrast CT image of a mildly calcified aortic valve (left) fused with the 18F-fluoride PET (right). Uptake can be seen overlying calcium deposition in the left coronary cusp but also in the absence of marcoscopic calcium. 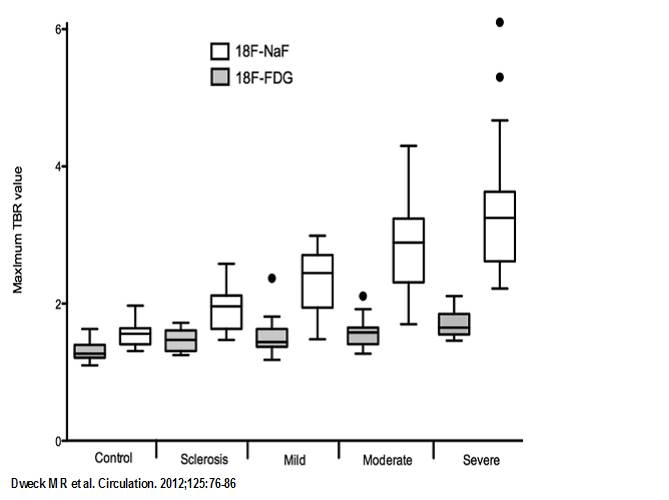 Studies using PET have demonstrated that calcification activity in the valve (as measured using 18F-Fluoride) steadily increases with disease severity. As a consequence, activity is highest in those with the most advanced disease. By contrast a weaker association is seen between the inflammation marker (18F-FDG) and disease severity.

18F-fluoride PET, therefore, acts as a marker of calcification activity in AS. Its clinical role may be limited by expense and availability, but this technique is rapidly evolving. If refined protocols can demonstrate a clear benefit in identifying patients who will progress quickly toward aortic valve replacement, then the technique may have a clinical future in risk stratifying patients. More immediately, 18F-fluoride PET is being explored as a surrogate end point in clinical trials examining the effects of novel drugs on disease activity in AS (e.g., SALTIRE II [Study Investigating the Effect of Drugs Used to Treat Osteoporosis on the Progression of Calcific Aortic Stenosis; NCT02132026]). Based on the principle that 18F-fluoride PET acts as a marker of activity, it is hoped that treatment effects will be detectable more rapidly than using CT or echocardiography, shortening the duration of phase 2 clinical trials and reducing their expense.

Finally, other studies are examining whether 18F-fluoride imaging can be performed at low radiation dose using PET or CMR and whether it can detect early signs of calcification in bioprosthetic valves as an early marker of valve degeneration. The latter could provide valuable insights into the longevity of next-generation valves and identify patients at risk of rapid valve failure.

Pathological studies have demonstrated that progressive myocardial fibrosis is one of the key drivers of LV decompensation in AS and the transition from hypertrophy to heart failure.9 CMR is able to visualize and quantify myocardial fibrosis directly using two techniques (Figure 3). The first is late gadolinium enhancement (LGE), which detects regions of replacement fibrosis in a mid-wall pattern that is easily differentiated from previous myocardial infarction. Importantly, this type of fibrosis appears to be irreversible following aortic valve replacement10 and is associated with multiple other markers of LV decompensation.11,12 Moreover, there is now evidence from three separate cohorts that the presence of replacement fibrosis is a strong independent risk factor for adverse outcomes.13-15 Mid-wall LGE, therefore, appears to be an objective marker of LV decompensation in AS. A multicentre, randomized controlled trial is due to begin enrollment next year, testing whether early valve intervention in asymptomatic patients based on the presence of mid-wall replacement fibrosis improves clinical outcomes. If positive, these would be the first randomized controlled trial data to assess the optimal timing of surgery in a sub-group of asymptomatic patients with AS and a marker of clinical risk. 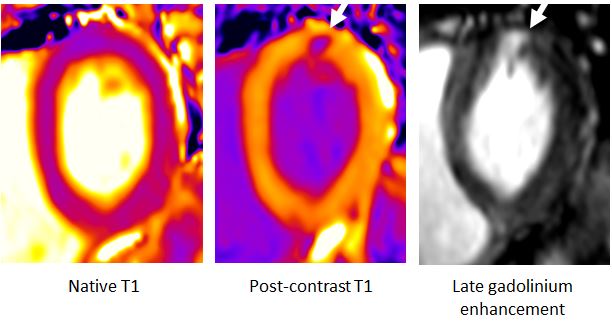 In fact, the most common form of fibrosis in AS is interstitial fibrosis, a diffuse and potentially reversible form of fibrosis that is missed by the LGE approach. There is, therefore, considerable interest in novel T1 mapping approaches that can detect diffuse fibrosis,16,17 although at present this approach is limited by overlap between control and disease states and variability in T1 mapping values between different scanners and vendors.18

Modern noninvasive imaging techniques can provide complementary information in AS to standard echocardiographic assessments. In particular PET imaging can inform about disease activity in the valve and CMR about decompensation of the hypertrophic LV response. Studies are ongoing to assess whether this information is clinically useful.

YOU ARE HERE: Home > Latest in Cardiology > Utility of PET and MRI in AS