Over 2 million patients in the United States have implanted devices, including pacemakers and implantable cardioverter-defibrillators (ICDs).1,2 It is estimated that more than 50% of these patients will require magnetic resonance imaging (MRI) after device implantation.3 However, there are major concerns that the static and gradient magnetic fields, and radiofrequency energy formed by MRI machines will interact with and cause malfunction of the device or permanent damage to the device, leads, or heart at the lead-tissue interface.4 Early reports, though lacking in significant details, implicated MRI scans in the death of several patients with implanted devices.5-11 Multiple in-vitro studies have shown that the magnetic fields can exert mechanical forces upon the device generators,12 cause electrical malfunction or noise that may be interpreted as cardiac activity, and significant heating of the lead-tissue interface from absorbed radiofrequency energy, leading to local myocardial damage and resultant decrease in lead functionality.6,10 Hence, since the early 1990s, implanted devices have been regarded as a near absolute contraindication to undergoing MRI scans and have prevented many patients from receiving an often optimal imaging test.13 In fact, there are reports of devices being explanted and later reimplanted in patients deemed to have an absolute necessity for MRI scan.14 This approach is clearly extreme, exposing the patient to the risks of two surgical procedures.

This important gap in the accessibility of MRI imaging has given rise to major efforts from the clinical standpoint to enable patients with implanted devices to safely undergo MRI scans, in parallel with the development of MRI-conditional devices designed to be safe in the setting of MRI scans.

Based on the relatively uncomplicated experience with MRI scans performed occasionally inadvertently on patients with implanted devices, since the early 2000s several centers have developed study protocols for those patients with an absolute clinical necessity for MRI scan. Protocols typically involve device interrogation and reprogramming to an asynchronous pacing mode in pacemaker dependent patients, inhibited modes in non-pacemaker dependent patients, and disabling tachyarrhythmia detection and therapies in ICDs prior to the MRI study.1,3,15,16 Continuous telemetry monitoring is utilized during the scan and supervised by a physician or nurse practitioner with expertise in device management and advanced resuscitation. Following completion of the scan, reinterrogation and reprogramming of original settings is performed. Multiple studies using 1.5 Tesla MRI magnets have demonstrated that MRI scanning outside of the thorax could be completed safely in pacemaker patients with a low device complication rate and no deaths attributed to the MRI study.1,3,15 These early successes led to a position statement by the European Society of Cardiology (ESC) in 2008 which considered the risks of MRIs in selected patients with implanted devices "acceptable" and set forth a protocol with careful selection criteria and best practices for safely performing MRI studies in these patients.17

In 2011 Nazarian et al.18 published their prospective nonrandomized experience (mostly single-center) with 555 MRI scans at 1.5 Tesla in 438 patients (54% pacemakers, 46% ICD, 12% with biventricular pacing system; pacemaker dependent ICD patients were excluded) which included both nonthoracic and thoracic (18% of studies) scans. No specific absorption rate (SAR) limit was used given lack of correlation with device complications in their prior study. They reported that three patients experienced a power-on-reset event with temporary reversion to a backup asynchronous pacing mode; two of these patients successfully completed the study while the third experienced mechanical forces upon the device generator requiring termination of the study. No clinically significant changes in device function requiring device replacement or reprogramming were observed though right ventricular lead sensed amplitude were lower and capture thresholds higher both acutely and at long-term follow-up. Both changes were more strongly associated with thoracic scans as compared to non-thoracic scans.

The larger 21-center Magnasafe registry19,20 examining non-thoracic MRI scans in 1,500 patients (1,000 pacemakers; 500 ICD) reported similar results with successful completion of all scans; only one ICD patient had device malfunction (required replacement due to battery drainage from tachytherapies inadvertently left on during the scan). While full details of this study have yet to be published, preliminary data showed a clinically-relevant parameter change acutely in 12% of pacemakers and 29% of ICD cases, but none at six month follow-up.

Recent years have seen the successful development and approval of MRI-conditional pacemakers, leads, and in the past year, ICDs and cardiac resynchronization (CRT) devices for 1.5 Tesla MRI scans of the entire body including the thoracic region. These systems have been redesigned to incorporate leads that are less subject to radiofrequency-induced heating, devices with fewer ferromagnetic materials, Hall switches rather than Reed switches – which act more predictably within a magnetic field – and better internal circuit protection.21 MRI scan modes are available for ease of switching to and from MRI pacing modes, similar to those described above for non MRI-conditional devices. Studies examining the use of these devices in 1.5 Tesla MRI scans have shown a near-zero rate of complications or clinically-significant device parameter changes both acutely and in longer-term follow-up.21-25 Though no monitoring standards exist, it is recommended that continuous monitoring be performed during the MRI study similar to those with non-MRI-conditional devices.26

At our center, we follow the protocols outlined in the ESC 2008 position statement17 and by Nazarian and colleagues.30 All MRI requests in patients with pacemakers or ICDs are reviewed jointly by cardiac electrophysiology and radiology physicians. Scans are limited to 1.5 Tesla MRI machines. All patients have their devices assessed before and after the MRI scan and reprogrammed as outlined above; scans are monitored by a nurse practitioner trained in device-management and advanced resuscitation (Figure 1).

For patients who require cardiac MRI studies for evaluation of myocardial scar, for example in pre-ablation planning for ventricular tachycardia, we address the issue of hyperintensity artifact from the device by replacing the usual nonselective adiabatic inversion pulse with a wideband hyperbolic secant inversion pulse of 3.8 kHz bandwidth.31 We have shown that this method allows excellent interpretation of LGE in the areas usually obscured by device artifact, and correlates well with scar areas as determined by electroanatomic mapping (Figure 2). However, image voids due to excessive proximity of the device cannot be corrected with this method. 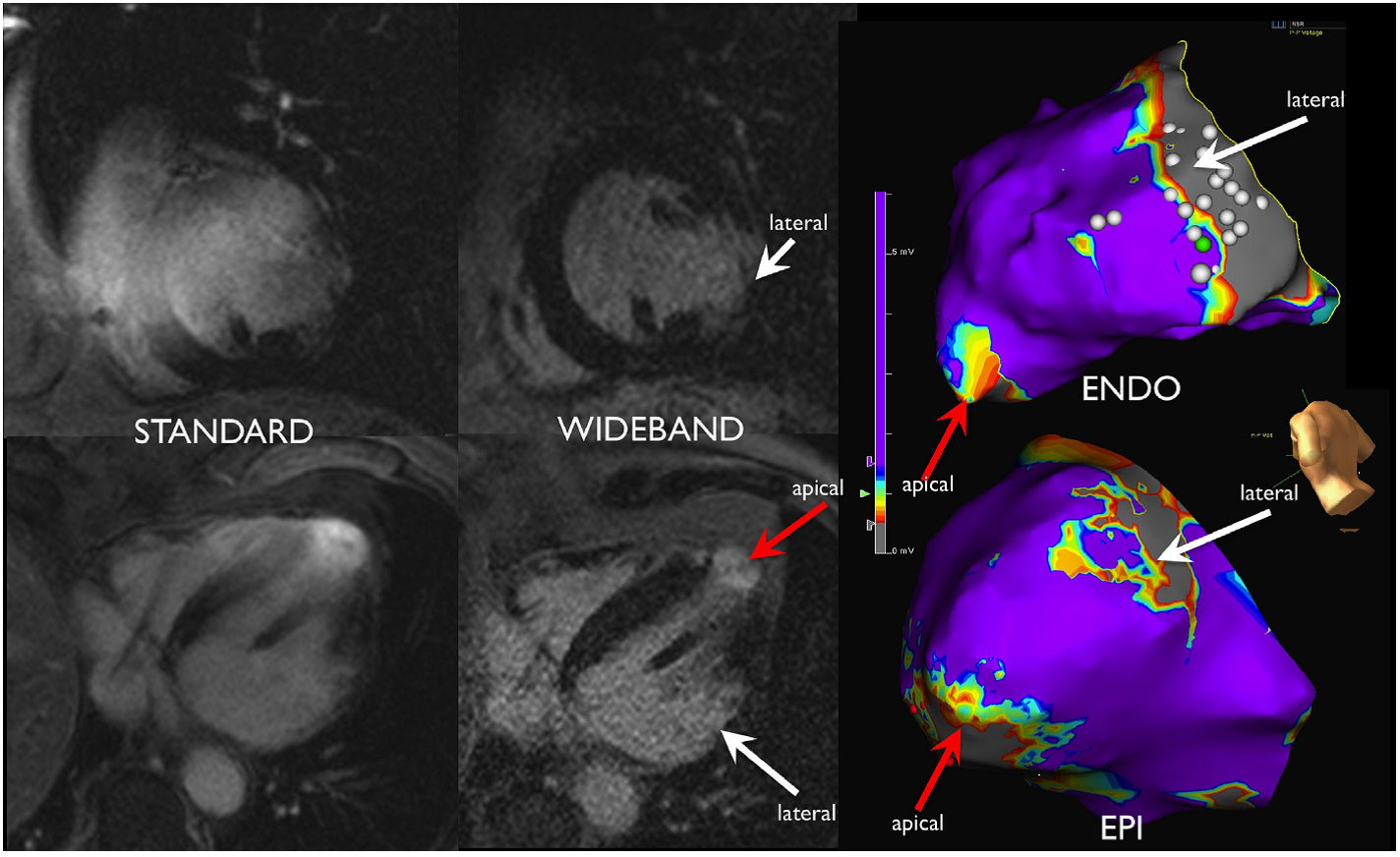 Given that this author's center has much experience with performing MRI studies on patients with implanted devices, we do not routinely implant MRI-conditional devices unless specifically requested by the patient or referring physician, or when it is known that the patient will likely need future MRI scans (Table 1). However, members of our group who practice primarily at another hospital have chosen to implant MRI-conditional devices routinely given the high prevalence of conditions such as low back pain and cerebrovascular disease in their patient population for which MRI scans are often required.

Many previous 'absolute contraindications' to MRIs are now being tested. Higgins et al. reported no adverse effects in 16 pacemaker patients and three ICD patients who underwent MRIs with abandoned leads in place.14 Several centers have safely performed MRI in recently implanted permanent or temporary-permanent devices without clinically significant complications.30 A small study has also demonstrated no significant issues with performing MRI in patients with subcutaneous ICDs.32 While studies with epicardial leads have not been reported, this begs the question whether there are still any absolute contraindications, or if there are only relative contraindications which must be weighed against the potential benefits of performing the MRI study, and may be managed safely with careful monitoring throughout the study (Table 2).33

While the question of the cost-effectiveness of MRI-conditional devices will persist, this calculation will likely change as these devices become more widely available and costs decrease. However, non-MRI-conditional implanted devices will likely continue to be in widespread use at least for the next decade, and in other parts of the world. It is not clear at this time whether CMS and other coverage policies will change in light of results from large studies such as the Magnasafe Registry study. This would pave the way for more centers to adopt protocols to allow MRI imaging for patients with implanted devices when there is a true clinical need.

An ongoing study, the Really ProMRI study,34 will also examine whether patients with MRI-conditional devices are facing difficulties obtaining MRI scans given conventional approaches to implanted cardiac devices, and lack of information and certainty in their clinical use and safety with MRI scanners.35

Work on an expert consensus statement from the Heart Rhythm Society on MRI exposure in patients with cardiac implantable electronic devices (CIEDs) is currently underway with an expected release in 2017. This document should provide further guidance for performing MRI in patients with both MRI-conditional and non-conditional devices, managing special circumstances including abandoned leads, and patient selection recommendations for MRI-conditional devices.

YOU ARE HERE: Home > Latest in Cardiology > MRI in Patients with Implanted Devices: Current Controversies