To Run or Not To Run: Athletes with Anomalous Aortic Origin of a Coronary Artery

A 14-year-old Caucasian male athlete presents for evaluation after a several month history of multiple episodes of near syncope immediately after competitive long-distance running. He describes associated nausea, pallor, and after one race, documented hypotension with systolic blood pressure of 60 mm Hg. Recovery from symptoms would take up to one hour. He otherwise denies chest pain, shortness of breath, palpitations, or actual syncope. He had been evaluated by a Pulmonologist for exercise-induced asthma, the work-up of which was negative. He continued to race despite the symptoms. He has no other health issues. An electrocardiogram is performed and is normal. However, because he is a competitive athlete and the symptoms occur solely with exercise, an echocardiogram is performed. This shows normal biventricular function, mild tricuspid valve regurgitation, and increased echogenicity of the inferolateral and inferior left ventricular walls. In addition, the right coronary artery (RCA) appears to arise from the left sinus of Valsalva. A cardiac MRI is performed which confirms the coronary anatomy (Figure 1). It also demonstrates a basal inferior wall infarct (Figure 2). An exercise stress test with myocardial perfusion is performed. This demonstrates a very high aerobic capacity (70 ml/kg/min), and occasional atrial ectopy throughout the test. There are normal heart rate and blood pressure responses. There is 1-2 mm ST segment depression in the inferior leads that resolves by 2 minutes in recovery. Technetium 99m sestamibi myocardial perfusion scan revealed a reversible, inferior wall myocardial perfusion defect. 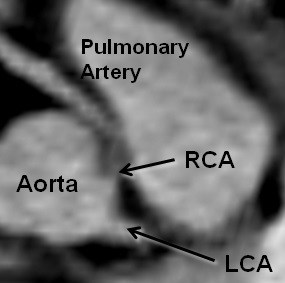 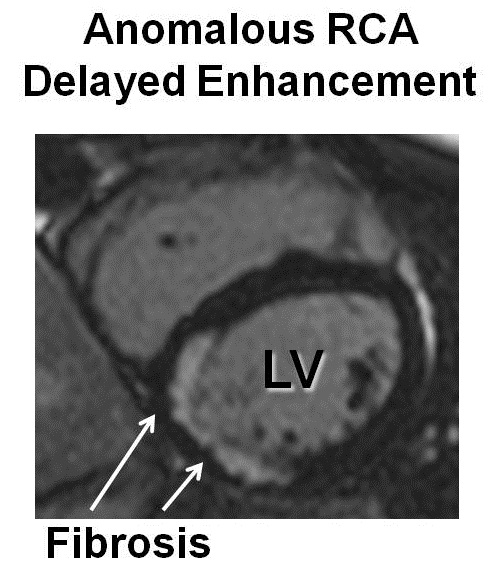 Anomalous aortic origin of a coronary artery from the opposite sinus of Valsalva with an interarterial and often intramural course (AAOCA) is a rare congenital anomaly in which either the left main coronary artery arises from or above the right sinus of Valsalva (AAOLCA), or the right coronary artery arises from or above the left sinus (AAORCA). The prevalence of AAOCA ranges from 0.1% to 0.7% of the population, depending on the definition of anomalous coronary artery, population studies, and imaging modality utilized.1-3 Both interarterial AAOLCA and AAORCA are associated with increased risk of myocardial ischemia, lethal ventricular arrhythmia, and sudden cardiac death (SCD); however, while AAOLCA is much less common than AAORCA, it carries a significantly greater risk of SCD,4-5 notably with high intensity, competitive sports. The risk is believed to be related to the course of the anomalous coronary artery, with only very rare instances of ischemic events occurring in those without an interarterial proximal course. In the United States, interarterial AAOCA is one of the most common causes of SCD in young athletes.6

For the athlete found to have AAOCA, the diagnosis can be life-altering. This is especially true for the athlete diagnosed serendipitously when an echocardiogram was performed for an unrelated reason (e.g. heart murmur, family history of cardiomyopathy, or congenital heart disease). When the diagnosis is made, children and adolescents are usually restricted from sports until further evaluation is performed. Further imaging is almost always utilized to confirm the diagnosis, most commonly a cardiac computed tomography angiography (CCTA) or MRI. An exercise stress test is usually performed as well to assess for inducible ischemia with or without a myocardial perfusion scan or stress echocardiogram. If there are abnormalities concerning for myocardial ischemia or significant ventricular arrhythmias then surgical referral will likely be recommended. Due to the significantly higher risk of SCD with interarterial AAOLCA, even if asymptomatic, most centers offer surgery to these patients. The quandary arises in the asymptomatic individual with interarterial AAORCA. The decision regarding surgical repair versus exercise restriction from competitive sports versus no exercise restriction is based on the perceived risk of a tragic event occurring. In the most recent American Heart Association/American College of Cardiology Scientific Statement regarding competitive sports participation, the guidelines now permit competitive sports in the asymptomatic young person with AAORCA, with adequate risk counseling of the family.7

However, determining risk of SCD is difficult. We do know that it is much lower than previously percieved. Mortality rates obtained from autopsy series5 are indicative of the prevalence of SCD in those who have died from AAOCA, not the risk of those living with AAOCA. For non-competitive athletes, the risk of SCD from AAOCA is quite low. Two examples of this come from recent studies by Meyer et al. and Pilmer et al.8,9 These authors evaluated SCD in the general population of young people. In both studies combined, there were four deaths from AAOCA out of a total of 34 million patient years. Two of those deaths were associated with physical activity and both children had interarterial AAOLCA.9 For the other two deaths, the Meyer et al. study did not specify which coronary was anomalous nor if the deaths were temporally related to exercise.8

When evaluating risk in the competitive athlete, the risk of SCD does appear to be greater than those who do not participate in competitive sports. Utilizing combined United States and Italian registries, Basso and colleagues published a review of competitive athletes who experienced SCD due to AAOCA. In those 35 years and younger, 27 deaths were noted (23 from AAOLCA, 4 from AAORCA), and all deaths occurred during or just after completing strenuous physical activity.4 Similarly, in a review of SCD or sudden cardiac arrest (SCA) among young United States athletes, 119 of the 1,049 cardiovascular deaths were due to AAOCA.10 Utilizing Maron's data, further analysis was undertaken to estimate the risk of death for athletes between ages 15-35 years due to AAOCA. Using several assumptions, the cumulative risk of SCD was determined to be approximately 6.3% for interarterial AAOLCA and significantly lower at 0.2% for AAORCA.11

Indeed, decision making regarding treatment can be quite complicated with this coronary anomaly. In the case of the runner presented above, it is more straightforward. Given his symptoms, fibrosis by MRI, and positive exercise stress test with evidence of a reversible perfusion defect, surgical unroofing of the anomalous coronary should be recommended. However, for others, notably those who have AAORCA and are found serendipitously, the morbidity and mortality of a cardiac procedure needs to be considered. In children and young adults, the most common surgery is the unroofing procedure for interarterial, intramural AAOCA but, depending on coronary anatomy, others may occasionally be utilized as well.12 While surgical repair for AAOCA has a low mortality with an estimated risk of 2.6%,13 there is potential morbidity associated with a major surgical procedure.14,15 As well, there can be continued signs of ischemia post-operatively,16 although none of these patients were restricted from athletics. Based on the data we have and the risk of surgery for AAOCA, it appears that for the young person who is not a competetive athlete, the potential risk of death from surgery outweighs the SCD risk, particularly in the asymptomatic patient with AAORCA.

Larger patient numbers are needed to better understand SCD risk with AAOCA. Ongoing research utlizing registry-based databases, such as the Congenital Heart Surgeons' Society Registry of Anomalous Coronary Arteries,17 is one way to evaluate differences between those with SCD, aborted SCD, evidence of ischemia, or potentially lethal arrhythmias and those who are asymptomatic. In addition, these registries can allow the long-term evaluation of those followed medically as well as those who undergo surgical repair, to see if there are differences in long-term morbidity and mortality. As we learn more about which patients are at highest risk for SCD, we can hopefully provide more informed and balanced information to families regarding the risks of SCD. In most cases, the decision-making is not straightforward and involves a detailed conversation with each family regarding the risks and benefits of conservative management versus surgical repair.

YOU ARE HERE: Home > Latest in Cardiology > To Run or Not To Run: Athletes with Anomalous Aortic Origin of a Coronary Artery