Side effects have been the "natural" flip side of effective cancer therapies. Even the development of so-called "targeted therapies" has not changed this unfortunate conundrum of causing disease while aiming to treat another. Little was known in the beginning that a molecular cancer target could have its pendant in a molecular cardiovascular target. One classic example is trastuzumab, a specific monoclonal antibody directed against the human epidermal growth factor receptor 2 that was thought to be relevant only for the growth of certain types of cancer cells. The occurrence of heart failure events, however, led to the discovery of the significance of this receptor pathway for cardiac function and provided novel insight into cardiac signaling pathways and biology.

Vascular toxicities are starting to share a similar story. Although some "old" chemotherapeutics such as 5-fluorouracil have been classically associated with chest pain and acute coronary syndromes, it was again the element of the unexpected that changed the field. In this regard, two tyrosine kinase inhibitors (TKIs) directed against the Philadelphia chromosome product BCR-ABL1 are to be mentioned: nilotinib and ponatinib. Cardiovascular events, some of which are fatal, have been reported in as many as 25% of patients on nilotinib over 5 years and in as many as 40% of patients on ponatinib within 2 years.1 They can occur as early as 2 weeks and as late as years after therapy. The more prominent dynamics with ponatinib led to a 3-month suspension and several new safety measures to be put in place thereafter. Since then, there has been a certain level of hesitation in the use of ponatinib and a call to actively interact and collaborate with cardiologists, especially those with a particular interest in the cardiovascular care of cancer patients (cardio-oncology). Knowledge, however, is required not only for the management of patients on ponatinib but also BCR-ABL1 TKIs and inhibitors of the vascular endothelial growth factor (VEGF) signaling pathway. Many other chemotherapeutics have been associated with various vascular toxicities, as outlined in Table 1.2 In keeping with the title of this short review, only the two specified groups of therapeutics are reviewed further; the reader is referred to more comprehensive reviews on this topic.2-4

Table 1: Chemotherapeutics With a Prominent Vascular Side Effect Profile2 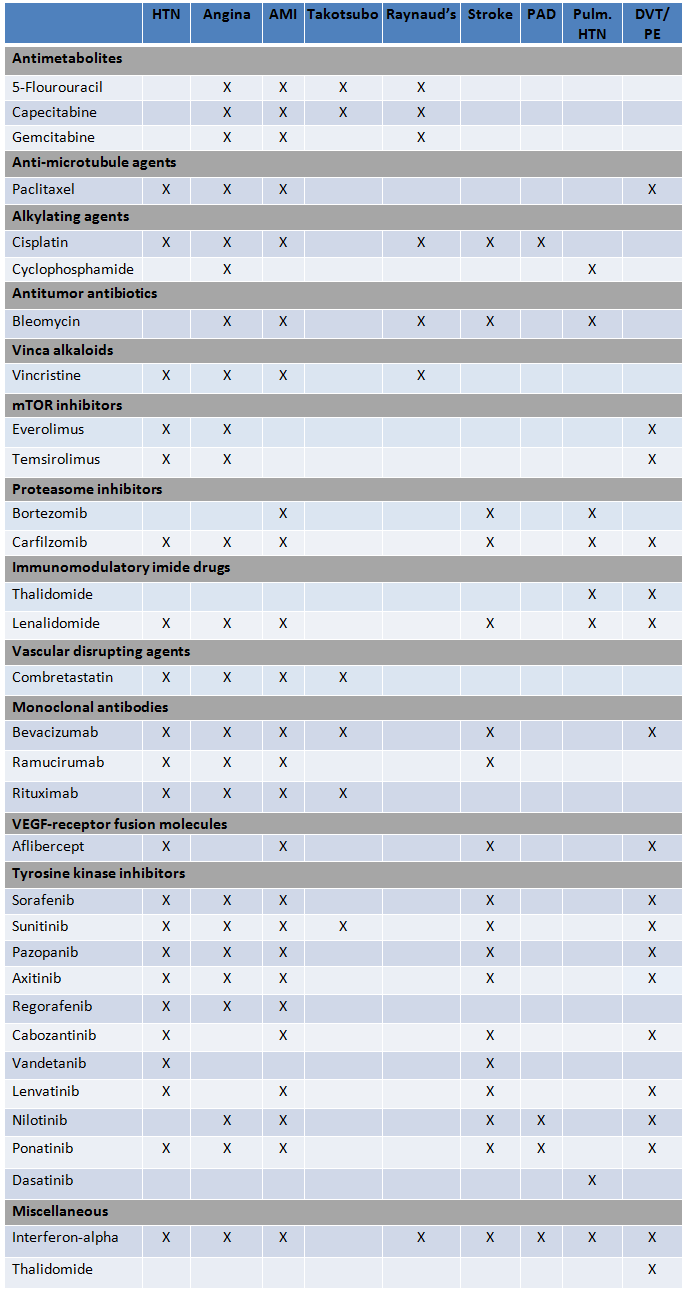 BCR-ABL1inhibitors are being used primarily for the treatment of Philadelphia chromosome-positive leukemias (chronic myeloid leukemia and acute lymphoblastic leukemia), but some have an extended-use spectrum. The first in this class was imatinib, initially confronted with concerns of cardiotoxicity but not vascular toxicity. Second generation BCR-ABL1 inhibitors include bosutinib and dasatinib, both associated with the phenomenon of fluid retention (edema > 10%, even pulmonary edema, and pericardial and pleural effusions in the order of 4%) rather than arterial vascular events (<5% incidence). Pre-capillary pulmonary hypertension can develop in 10% of patients on dasatinib therapy, which is deemed at least partially reversible in the great majority of patients.5,6 The third second-generation BCR-ABL1 inhibitor is nilotinib, with known vascular event risk. In the initial study of 24 patients, 25% experienced acute myocardial and spinal infarctions, even sudden death, and rapidly progressive peripheral arterial occlusive disease (PAD).7 On the contrary, in the largest series so far with 233 patients, the incidence of all acute vascular events combined was only 2%.8 Although patients with a prior history or diagnosis of atherosclerotic cardiovascular disease or risk factors are at higher risk, those without are not spared. Progression of vascular disease may be noted even when cardiovascular disease and risk factors were well managed and even after discontinuation of nilotinib. The preferential involvement and presentation is PAD, most commonly lower extremity ischemia, but visceral and renal artery involvement has been described as well. Alterations in ankle-brachial index (ABI) have been described in 26-36% of patients receiving nilotinib, with the first abnormal ABIs reported after 21-56 months in the first-line nilotinib group.9 These data point to vascular occlusive disease as the underlying process and have important implications for surveillance recommendations.4

Ponatinib has similarly been associated with vascular events, approximately three times more arterial than venous events. In comparison with nilotinib, the initial studies indicated more frequent coronary involvement with acute myocardial infarctions and strokes than peripheral arterial events.10 However, the latter may not be as readily recognized. Overall, acute vascular events seem to occur sooner and at an approximately two times higher rate with ponatinib than with nilotinib.1 There currently is no understanding of the underlying mechanisms, best preventive strategies, or modes of therapy. ABI at baseline and 3 and 6 months intervals has been suggested as well as serial electrocardiograms.4 The role of cardiac stress testing prior to the initiation of therapy is unknown. Similar to nilotinib, cardiovascular risk scores may be calculated to estimate global patient risk before therapy, and patients should continue to be followed from a vascular standpoint after therapy given reports on sustained risk for cardiovascular events. Accordingly, from before until after therapy, patients should receive the best possible cardiovascular care to minimize the risk of events. This has been summarized in the ABCDE approach:4

VEGF signaling pathway inhibitors are very much intertwined with the topic of vascular toxicities with cancer therapies. Bevacizumab was the first specific VEGF inhibitor to be approved and is used in patients with colorectal cancer, non-small cell lung cancer, renal cell cancer, and glioblastoma multiforme. It operates as recombinant humanized monoclonal antibody against VEGF-A. Other extracellular VEGF signaling pathway inhibitors that have followed include ziv-aflibercept ("VEGF trap", a recombinant fusion protein of VEGF binding portion of the VEGF receptors 1 and 2 fuse to the Fc portion of a human IgG, used for colorectal cancer) and ramucirumab (human monoclonal antibody against VEGF receptor 2, used for gastric and non-small cell lung cancer). The other major strategy has been intracellular inhibition of the tyrosine kinase activity of the VEGF receptor. Sorafenib (used for hepatocellular cancer, renal cell cancer, and differentiated thyroid cancer) and sunitinib (used for gastrointestinal stromal tumors, advanced pancreatic neuroendocrine tumors, and renal cell cancer) were some of the first small molecule TKIs to be introduced and associated with cardiovascular side effects. Since then, this class of drugs has expanded considerably.

The most common side effect of VEGF signaling pathway inhibitors is new onset or worsening systemic hypertension in >50% of patients. Chest pain can occur in up to 15% of patients, ranging from stable angina to acute coronary syndromes, even Takotsubo cardiomyopathy. Compared with bevacizumab, the risk of acute thromboembolic events may be 50-100% higher with VEGF receptor TKIs, overall in the order of 2-3%.11-15 In one meta-analysis, sunitinib, pazopanib (used for renal cell cancer and advanced soft tissue sarcoma), and sorafenib were found to have the highest relative risks of 5.9, 4.6, and 2.3, respectively, and axitinib (used for renal cell cancer) and vandetanib (used for medullary thyroid cancer) the lowest risk.15 However, such meta-analyses are challenged by heterogeneity in the number of studies available for any given drug and their study populations, as illustrated in direct comparison trials. Incidences may also vary by patient population, ethnicity, comorbidities, and concomitant therapy spectrum.

The vascular toxicities of VEGF signaling pathway inhibitors may represent an on-target effect on the level of the vasculature.16 The immediate effect of VEGF receptor signaling inhibition is a decrease in the activity of endothelial nitric oxide synthase due to a reduction in the activity of a PKB/Akt and subsequently via a decrease in the expression of endothelial nitric oxide synthase. Furthermore, as a consequence of VEGF receptor inhibition, endothelial nitric oxide synthase can become uncoupled, leading to paradoxical production of superoxide anions. Activation of the endothelin system and increase in endothelin-1 production are additional consequences. All of these lead to an increase in systemic vascular tone, contributing to arterial hypertension.17-20 Interference with Rho kinase activation in vascular smooth muscle cells can cause a further increase in vascular tone to the point of vasospasm, as reported for sorafenib.21-24 Interference with the platelet-derived growth factor (PDGF) signaling pathway (an off-target effect) accounts for endothelium-dependent and independent microvascular dysfunction and a reduction in coronary flow reserve. In combination, inhibition of VEGF and PDGF receptor signaling might lead to more cardiovascular toxicity than either one alone (Figure 1). Furthermore, intracellular inhibition of endothelial cell VEGF signaling, as done with small molecule TKIs, exerts a much more devastating effect on endothelial cell viability than extracellular inhibition of VEGF receptor signaling. Illustration of the impact of TKIs such as sunitinib on VEGF, angiopoetin-1, and PDGF signaling and thereby pericyte and endothelial cell function and survival.

In keeping with this view, even though generated in two different experimental models, VEGF receptor TKI treatment increases atherosclerotic lesion formation whereas bevacizumab reduced it.18 Neither approach, however, led to plaque destabilization. In clinical practice, cases of progression of coronary artery disease and plaque rupture have been reported for sorafenib and sunitinib, respectively.25,26

The current cardiovascular recommendations for VEGF signaling pathway inhibitors focus only on blood pressure control prior and during therapy. The usual goal blood pressure has been <140/90 mmHg and should be accomplished before start of therapy. Thereafter, blood pressure should be monitored weekly for the first 6 weeks, then monthly or as clinically indicated, and antihypertensive medications should be prescribed to maintain blood pressure at goal. Therapy is to be temporarily interrupted for blood pressures ≥160 mmHg systolic or ≥100 mmHg diastolic that persist despite optimal medical management (grade 3 hypertension). When the degree of hypertension is controlled to values below these cutoffs, therapy can be resumed at a reduced dose. In the event of any life-threatening (grade 4) hypertension, it is not recommended to resume therapy. Caution is advised to use these drugs in patients who experienced or are at risk of arterial or venous thrombotic events similar to BCR-ABL1 inhibitors with cardiovascular risks. The time interval from an arterial or venous thrombotic event that is presumed to be safe enough to allow initiation of therapy is not defined (no data within one year of an arterial event and half a year of a venous event). In patients who develop new or acute onset ischemia or infarction, therapy is to be interrupted and resumed only if the benefit of therapy outweighs the cardiovascular risk. Electrocardiograms are advised to be obtained at baseline and then at 2-4 weeks, 8-12 weeks, and then every 3 months to assess not only asymptomatic ischemic changes but also QTc prolongation.

TKIs have revolutionized the field of cancer therapy and are prescribed so commonly nowadays that cardiologists should be familiar with their cardiovascular side effects profiles. Some vascular toxicities are expected on-target effects of chemotherapeutics (e.g., VEGF signaling pathway inhibitors). For others drugs (e.g., BCR-ABL1 inhibitors), vascular side effects were never anticipated and remain incompletely understood. For this reason, the evaluation and management of these patients has remained challenging. It seems prudent, though, that all patients receive the best possible cardiovascular care before and after cancer therapy to minimize the risk of cardiovascular events. Until more data on screening, prevention, treatment, and follow-up care become available, an ABCDE approach is recommend. For patients who did experience a severe cardiovascular event while on treatment with any of the outlined drugs, the discontinuation of therapy might be the only viable option if no protective approach can be defined and alternatives for cancer therapy are available.

YOU ARE HERE: Home > Latest in Cardiology > Vascular Toxicities of Novel Cancer Therapies