Physical Health and Exercise in Cancer

Cardiovascular Disease in Survivors of Cancer

Cardiovascular disease (CVD) and cancer are the leading causes of death in the United States.1 As a result of advances in cancer prevention, early detection, and treatment, the cancer death rate has decreased by 23% since 1991,1 and it is projected that the number of long-term cancer survivors will be 18 million people by 2022.2 An unanticipated consequence of improved cancer-specific mortality is that cancer survivors are at increased risk for CVD-related morbidity and mortality.2-4 Indeed, 5- and 8-year overall survival is significantly lower among survivors of cancer who developed CVD compared with survivors of cancer without CVD.5

In accordance with the "multiple hit" hypothesis, increased CVD mortality in cancer survivors is related to underlying CVD risk factors coupled with the direct effects of anti-cancer therapies (arrhythmias, cardiomyocyte damage, hypertension, and myocardial and vascular ischemia) and indirect effects of an unhealthy lifestyle (decreased physical activity and increased body mass) that result in reduced cardiovascular reserve.6 Accordingly, an important goal across the cancer survivorship continuum is to maintain optimal cardiovascular health.

Reduced Cardiorespiratory Fitness in Patients With Cancer and Survivors

Cardiorespiratory fitness is a major independent predictor of mortality in healthy persons with or without CVD.7,8 As shown in Figure 1, cardiorespiratory fitness, measured objectively as peak oxygen uptake (peak VO2), has been shown to be 25% lower (11-36%) in cancer survivors compared with age- and sex-matched sedentary individuals without a history of cancer.9-13 The relatively few studies published to date suggest that the magnitude of the decline in peak VO2 may be related to the type of cancer, with lowest and highest reported values found in survivors of lung and prostate cancer, respectively (Figure 1). Importantly, peak VO2 in survivors of lung and breast cancer is below the cut point value (i.e., 18 ml/kg/min) distinguishing between high and low physical function (Figure 1).14 A consequence of the reduced peak VO2 is that it is a predictor of survival in survivors of lung and breast cancer.9,10 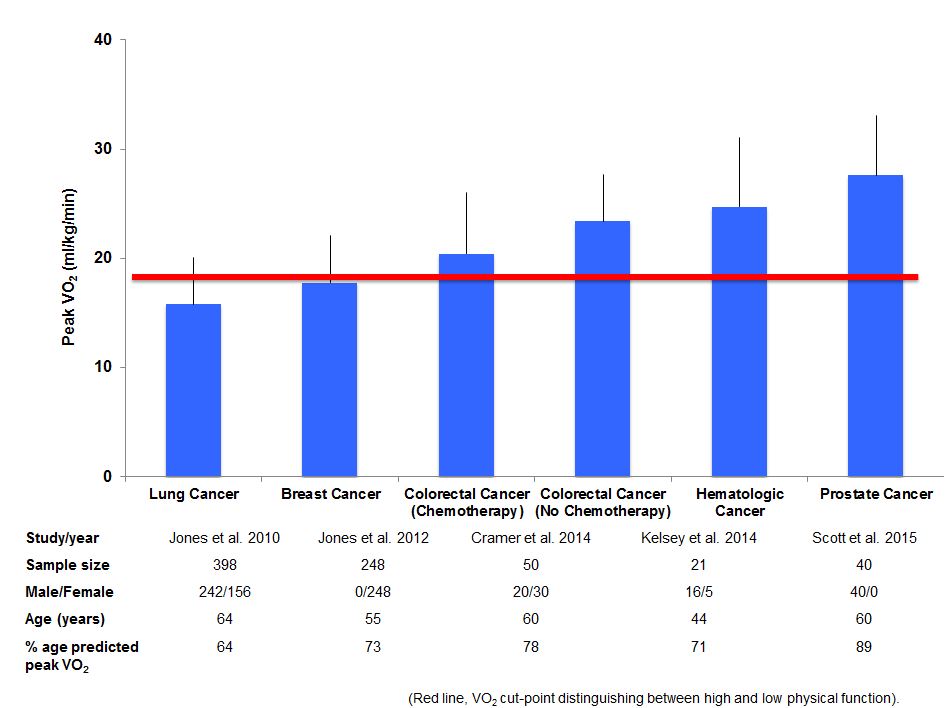 Currently, there is a paucity of studies that have examined the mechanisms of exercise intolerance in cancer survivors. Our research group compared peak VO2 and its determinants during cycle exercise in 47 female survivors of breast cancer (mean age was 59 years; mean time post-chemotherapy completion was 34 months) and 11 age-matched women.15 In accordance with the Fick principle (VO2 = stroke volume [SV] x heart rate x arterial VO2 content difference), the significantly lower peak VO2 (19%) in survivors of breast cancer versus healthy controls was due to a lower peak exercise SV and cardiac output (CO) because heart rate and arterial VO2 content difference were not significantly different between groups (Figure 2).15 In turn, the reduced peak SV may be due to increased ventricular afterload and/or reduced myocardial contractility during exercise.15 Finally, given that oxygen extraction is directly proportionate to muscle oxygen-diffusing capacity (i.e., transport of oxygen from hemoglobin to muscle mitochondria) and inversely related to CO,16 our finding that peak exercise arterial VO2 content difference is not different between survivors of breast cancer and healthy, age-matched controls despite a significantly lower CO (and a longer transit time for muscle oxygen extraction) suggests that abnormalities in microvascular function or skeletal muscle morphology (i.e., decreased capillarity, oxidative muscle fibers, and enzymes) may limit peak VO2 in survivors of breast cancer. Future studies are required to examine the mechanisms of exercise intolerance in multiple cancer populations, including early and latent effects from anti-cancer therapy. 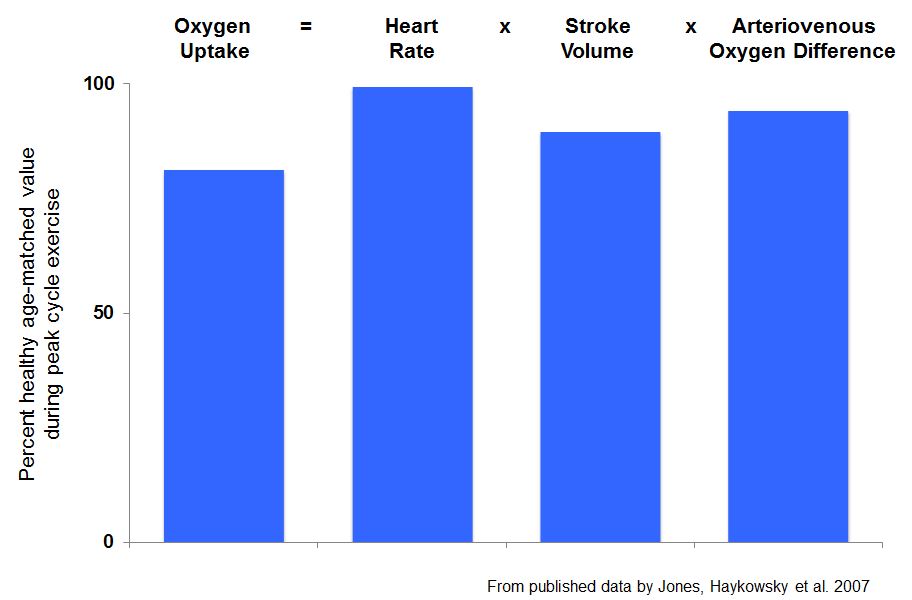 A meta-analysis by McNeely et al. demonstrated that exercise training resulted in significant improvements in peak VO2, physical functioning, quality of life, and reduced symptoms of fatigue in survivors of breast cancer.17 A more recent meta-analysis by Jones et al.18 and Beaudry et al.19 extend these findings by demonstrating that endurance exercise performed alone or with supplemental strength training significantly increased peak VO2 (Jones et al. weighted mean change was 2.90 ml/kg/min18; Beaudry et al. weighted mean change was 3.13 ml/kg/min19) in survivors of lymphoma and breast, colon, liver, and prostate cancer with early or advanced disease. Importantly, Beaudry et al. reported that a threshold workload of 600 intensity-minutes (i.e., a 10-week exercise program of 90 minutes per week at 70% peak VO2) was the threshold level required to obtain a clinically significant improvement (i.e., effect size > 1.0) in peak VO2. Currently, the physiological mechanisms responsible for the exercise-training-mediated improvement in peak VO2 in survivors of cancer have not been studied. Moreover, it is also unknown if the favorable change in peak VO2 with training is associated with increased survival.

Due to advances in cancer prevention, early detection, and treatment, cancer mortality rate has decreased by 23% in the past 25 years. Long-term survivors of cancer have been shown to be at increased risk for CVD-related mortality2-4 that may be due to the direct effects of anti-cancer therapies and indirect effects of an unhealthy lifestyle.6 Evidence to date suggests that decreased peak VO2 is an independent predictor of survival in lung cancer and advanced breast cancer.9,10 Regular exercise training is a safe and effective therapy to improve peak VO2 in cancer survivors.17-19 Despite this benefit, the mechanisms responsible for this favorable adaptation and its relationship to improved cancer survival remain unknown.

YOU ARE HERE: Home > Latest in Cardiology > Physical Health and Exercise in Cancer