Marijuana is already legal in some states, and there is push toward legalization in many more states. Physicians can, therefore, expect to encounter more patients who use or abuse marijuana. Therefore, physicians need to be aware of its effects on the cardiovascular system. Due to restrictions on manufacturing and distribution, there is a paucity of well-validated clinical studies describing the cardiovascular and other systemic effects of marijuana. Further, lacing and other chemicals present in marijuana are major confounding variables that may contribute to the untoward effects of marijuana.

The active psychotropic component of marijuana is delta-9-tetrahydrocannabinol (THC).2 It mainly acts on CB1 and CB2 receptors. These are G-protein-coupled membrane-bound receptors and play a role in signal transduction through modulation of adenylate cyclase, mitogen-activated protein kinases (MAPK), and members of the nuclear factor kappa-light-chain-enhancer of activated B cells (NF-κB). Endogenous ligands like anandamide and 2-arachidonoylglycerol also act on these receptors.

Oxidized LDL, which has been incriminated in the development of atherosclerosis, causes increased CB1 and CB2 receptor expression and increased endogenous cannabinoids (anandamide and 2-arachidonoylglycerol) production. This results in increased lipid accumulation in macrophages. Exogenous synthetic cannabinoid was shown to increase macrophage lipid accumulation, and prior treatment with CB1 receptor antagonist was shown to decrease this effect.3

All this information on the biological effects of cannabinoids has not translated into a reduction or an increase in atherosclerosis in clinical trials. STRADIVARIUS (Strategy to Reduce Atherosclerosis Development Involving Administration of Rimonabant – the Intravascular Ultrasound Study) and the AUDITOR (Atherosclerosis Underlying Development Assessed by Intima-Media Thickness in Patients on Rimonabant) trial evaluated the effects of the CB1 receptor antagonist rimonabant on atherosclerosis. In STRADIVARIUS, the percentage of atheroma volume (the primary end point) did not change with rimonabant, but total atheroma volume (a secondary end point) decreased.14 In the AUDITOR trial, there was no decrease in the progression of carotid artery intima-media thickness, which is the surrogate marker for atherosclerosis.15 Currently, other studies are underway with CB1 and CB2 receptor modulators to develop them as potential targets against atherosclerosis.

Effect on the Cardiovascular System

In humans, marijuana use causes tachycardia, peripheral vasodilation, postural hypotension, and elevation in both systolic and diastolic blood pressures in supine position (Figure 2). Tachycardia is believed to be a result of increased sympathetic nervous system activity after marijuana use.16 Other proposed mechanisms for this effect are the inhibition of parasympathetic innervation to the heart and reflex tachycardia from vasodilation. Elevated norepinephrine levels and augmentation of left ventricular function was observed after marijuana use.17 However, in a study in patients with CAD and angina, marijuana use was shown to decrease end diastolic volume, stroke index, and ejection fraction without causing any change in end systolic volume or cardiac index.18 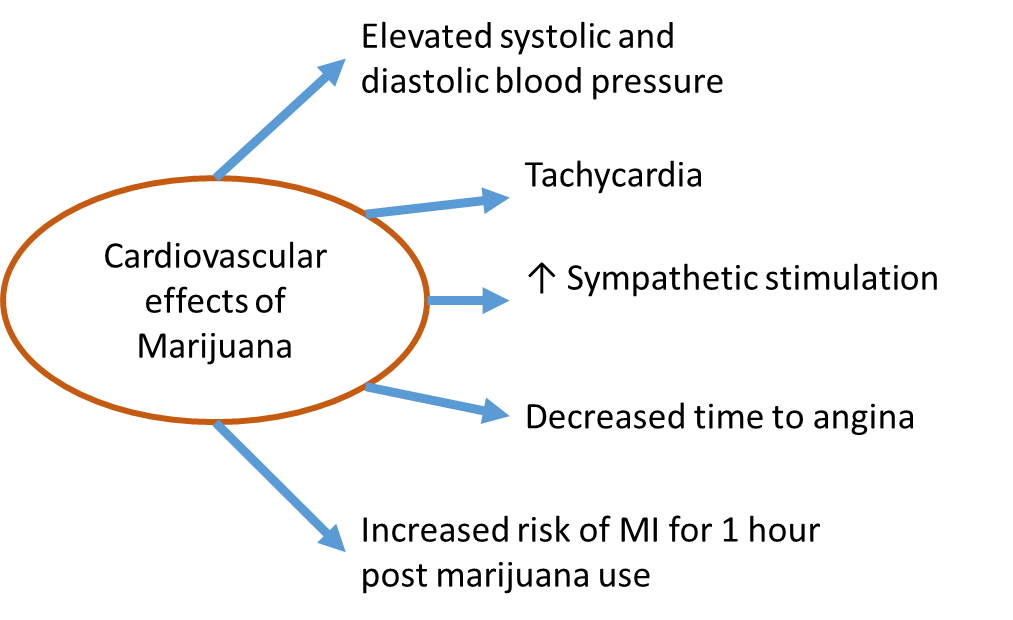 In patients with chronic stable angina, smoking a single marijuana cigarette decreased exercise time to angina by 48%. It is postulated that that marijuana-induced sympathetic stimulation increases myocardial oxygen demand. This, along with a decreased oxygen supply due to carboxyhemoglobin formation from inhalation of products of combustion in the marijuana cigarette, decreases the exercise capacity.19

To determine the role of marijuana as a trigger for acute coronary syndrome (ACS), Mittelman et al. performed a case-crossover analysis on 3,882 patients from Onset (Determinants of Myocardial Infarction Onset Study). Among 3,882 patients, 124 reported marijuana use in the past year. The authors found an elevated risk up to 4.8 times for MI within 1 hour of use of marijuana. The risk declined rapidly after 1 hour. It should be noted that the number of patients who reported marijuana use constituted only 3.2% of the entire group. A calculated annual risk of 1.5-3% of acute cardiovascular event was seen in daily marijuana users. Being a case-crossover design, the study was free from confounding variables due to traditional risk factors for CAD. Nawrot et al. positioned marijuana at the third position behind cocaine and a heavy meal for the risk of triggering MI.20 Cocaine had an odds ratio of 24 compared to 4.8 for marijuana in the Mittelman et al. study. The population-attributable risk of marijuana was the second lowest among the triggers at 0.8, suggesting a low prevalence in population. Even though there are case reports and in vitro studies that point toward marijuana causing increased platelet activation and coronary vasospasm, there is no definite proof for this hypothesis.21 In a 15-year longitudinal follow up of 3,617 adults in the CARDIA (Coronary Artery Risk Development in Young Adults) study, there was no association between marijuana and cardiovascular risk after adjusting for confounding factors.22 But marijuana use was associated with other unhealthy behavior, such as high-caloric diet, tobacco smoking, human immunodeficiency virus infection, and other illicit drug use, which by itself causes poor health outcomes. In addition, other large sample size, long-duration, longitudinal studies also failed to show any statistically significant increase in mortality due to cardiovascular events in marijuana users.23,24 However, in patients who already had an MI, marijuana use more than once a week was associated with a threefold increase in mortality.25

Multiple case reports of ACS after marijuana use have been published in the literature. But evaluation of cardiovascular effects of marijuana is complicated due to concurrent use of other drugs like cocaine, poor quantification, and the presence of multiple chemical compounds in marijuana other than THC. Also, different methods of consumption of marijuana may alter the amount and types of chemicals ingested. For example, blunts are marijuana rolled in tobacco leaves, and joints are rolled in cigarette paper. Therefore, using blunts will produce effects of nicotine in addition to the effects of marijuana.26 Using joints, on the other hand, results in inhalation of chemicals from the combustion of paper.

Among cannabinoid receptors, CB1 receptors are pro-atherogenic, and CB2 receptors are anti-atherogenic. Studies are currently underway to develop molecules targeting CB1 and CB2 receptors to alter the course of atherosclerosis. There are no clinical data to suggest any definite relationship between recreational marijuana use and atherosclerosis. Marijuana causes tachycardia and decreased exercise time to angina and increases the risk of triggering an ACS. Long-term, large sample size studies have failed to show an increase in cardiovascular mortality related to marijuana use. However, marijuana use can precipitate an acute event in susceptible patients, and its use may be associated with increased mortality in patients with history of MI.

YOU ARE HERE: Home > Latest in Cardiology > Marijuana and Coronary Heart Disease