Several chemotherapy agents, but in particular adriamycin, are known to cause cardiomyopathy.1,2 Ever since the first reports of possible cardiotoxic effects from anti-cancer agents, there has been well-documented, steady progress in efforts to detect and characterize this kind of pathology in clinical practice.

Once cardiac imaging was established in the late 70s and early 80s, a number of publications supported the different available modalities,3-7 establishing left ventricular ejection fraction (LVEF) as the traditional method for initial and follow-up evaluation of ventricular function during the administration of cardiotoxic chemotherapeutic agents.

Over a short period of time, measurement of LVEF by nuclear methods (multigated acquisition [MUGA]) became an established practice and was considered the gold standard for left ventricular function assessment during chemotherapy. LVEF by radionuclide imaging proved to be sensitive, specific, and reproducible and, in at least one early report when used with stress, was a predictor of early cardiac toxicity.3 LVEF, reported as a single measure, was clearly the real strength of this imaging technique.

Over time, three-dimensional echocardiography has been recognized as another method for LVEF measurement that compares favorably with the considered gold standard: cardiac magnetic resonance imaging10 and conventional MUGA scan.11 But measurement of LVEF as a sole indicator of cardiotoxicity has many limitations. These include image quality or the technicality of the measurement (single beat, operator experience, and volume drawing style). In addition, the ejection fraction is merely the relative volume ejected in systole, and it can be load dependent. In many conditions affecting the heart, such as diabetes, coronary artery disease, amyloid, and hypertension, the LVEF measure may be well-preserved until late in the course of the disease. In the case of chemotherapy-related cardiac dysfunction, it has become increasingly clear that LVEF is an imperfect tool; it documents only that a process has indeed already changed, perhaps permanently12 and too late,13 the function of the myocardial tissue.

New methods for reliable noninvasive evaluation of cardiac function, such as speckle tracking echocardiography, are now available. Speckle tracking takes full advantage of a new capacity for image acquisition at higher frame rates. This new avenue for evaluation of myocardial function has helped immensely in the understanding and evaluation of some of the disorders already mentioned.14

Several reports have now been published in the cancer population receiving cardiotoxic agents, and the use of this particular technology in the realm of cancer therapeutics-related cardiac dysfunction has been very exciting, particularly the use of longitudinal deformation measures and the global longitudinal strain (GLS) value.

It was first reported in 2009 that changes in tissue deformation, assessed by myocardial strain and strain rate, were able to identify left ventricular dysfunction earlier than LVEF in women undergoing treatment with trastuzumab for breast cancer.15 Following this, two reports in 2011 have resulted in comparable findings.16,17

A multicenter collaboration17 found the cooperative use of troponin and longitudinal strain measures to predict the development of cardiotoxicity, defined as a reduction of LVEF of ≥5 to <55% with symptoms of heart failure or an asymptomatic reduction of the LVEF of ≥10 to <55% in patients treated with anthracyclines and trastuzumab. In this study, patients who demonstrated decreases in longitudinal strain measures or elevations in hypersensitive troponin had a ninefold increase in risk for cardiotoxicity at 6 months compared with those with no changes in either of these markers. Furthermore, LVEF alone, diastolic function parameters, and N-terminal pro-B-type natriuretic peptide did not help predict cardiotoxicity.

In a review including over 30 studies, it has been reported that although the best GLS value to predict cardiotoxicity was not clear, an early relative change between 10 and 15% appears to have the best specificity.18 This preceded a consensus statement19 on the evaluation of adult patients during and after cancer therapy that was published by the American Society of Echocardiography and the European Association of Cardiovascular Imaging. This document conservatively indicates, based on the currently available literature, that a relative percentage reduction in GLS of >15% is very likely to be abnormal, whereas a change of <8% appears to be of no clinical significance. It also suggests that an abnormal GLS value should be confirmed by a repeat study. The repeat study is recommended to be performed 2-3 weeks after the initial abnormal study. It should be noted that these suggestions have been reported mostly in the breast cancer population. It remains to be seen if this same cardiac imaging benefit will extend to other malignancies in their course of treatment.

In practice, however, due to the seemingly low values for relative GLS percentage change in the early follow-up of these patients, and particularly in laboratories where there are systems from multiple vendors, the concern for reproducibility and consistency among vendors continues to be a problem (Figures 1A-2B). 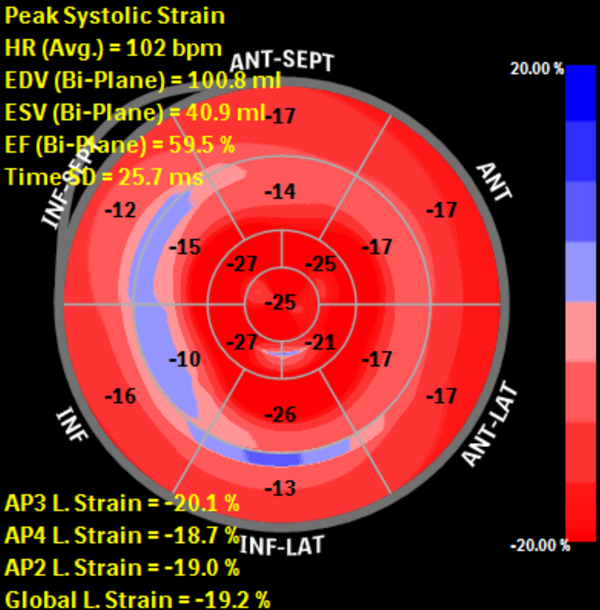 A young woman with breast cancer has normal LVEF in pre-chemotherapy study: GLS 19.2% by vendor A. 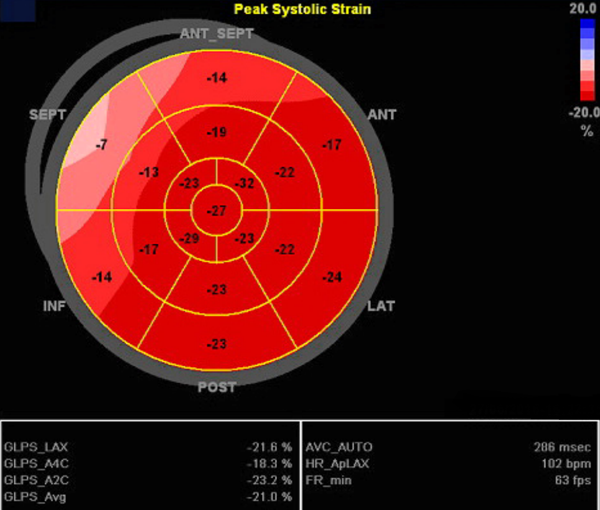 The same patient, day, and sonographer from Figure 1A: GLS 21% with predominantly a septal base defect by vendor B. Note an absolute difference of 1.8% but a relative difference from the first vendor of 9.4% (>15% is already considered likely to be abnormal in follow-up). 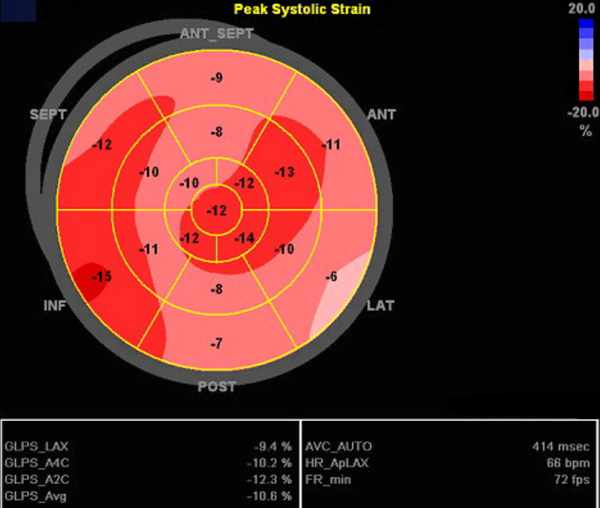 A middle aged man with known LV dysfunction has LVEF 40% and is considered for more chemotherapy: GLS 10.6% by vendor A. 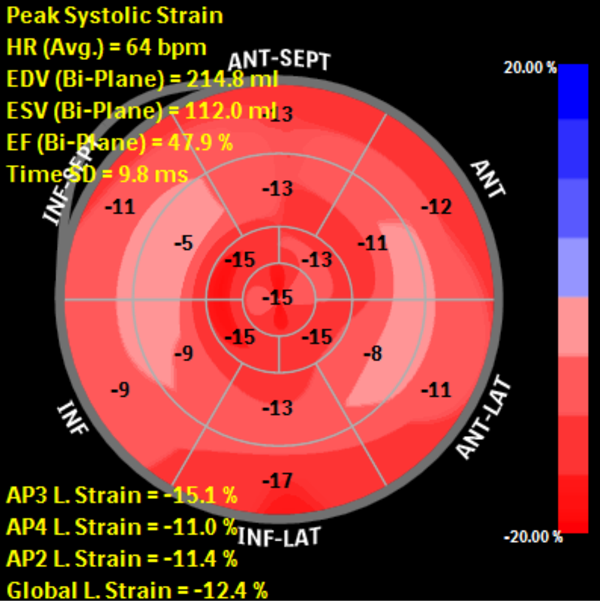 The same patient, day, and sonographer from Figure 2A: GLS 12.4% by vendor B. Note again an absolute difference of 1.8% but a relative difference from the first vendor of 16.9% (>15% is already considered likely to be abnormal in follow-up).

A joint standardization task force between professional societies and industry was initiated in 201020,21 to reduce inter-vendor variability of strain measures, and the task force's efforts have produced some initial results.22 A possible solution to this dilemma could be in the form of vendor-independent software. These would analyze images from a Digital Imaging and Communications in Medicine standard format, but the loss of the benefit from the higher frame rates of the original image data might create a disadvantage in serial follow-up of the same patient. Certainly, more research studies with solid results from such an approach are needed. For the time being, it seems only prudent at this time to recommend follow-up with the same vendor system.

YOU ARE HERE: Home > Latest in Cardiology > The Role of Strain Imaging in Oncology and Vendor-to-Vendor Variability