Systemic inflammatory diseases compose a heterogeneous group of disorders characterized by an excessive immune response against several self-antigens, due to the interaction between genetic predisposing factors, dysregulation of the immune system, and environmental factors. In many systemic inflammatory diseases, an increased risk of developing ischemic heart disease (IHD) has been reported.1

The most studied systemic inflammatory diseases with increased risk of IHD follow:

The development of atherosclerosis in systemic inflammatory diseases is likely accelerated by systemic chronic inflammation. However, occurrence of coronary lesions may also be attributable to coexistence of traditional CV risk factors. On the other hand, rheological characteristics such as whole blood viscosity, plasma viscosity, and erythrocyte deformability, aggregation, and nitric oxide production have been increasingly linked to CV risk in the general population and are independently associated with subclinical atherosclerosis in patients with systemic inflammatory diseases. Likewise, proinflammatory cytokines (Figure 1),2 in addition to the expression of neoepitopes on endothelial cells, promote vulnerability and premature rupture of atherosclerotic plaques. Notably, increased mortality is also observed in patients with positive rheumatoid factors, and the extent of inflammation in rheumatoid arthritis has also been linked to increased CV mortality, suggesting the relevance of computing the inflammatory and specific rheumatoid arthritis biomarkers in the risk estimation.1 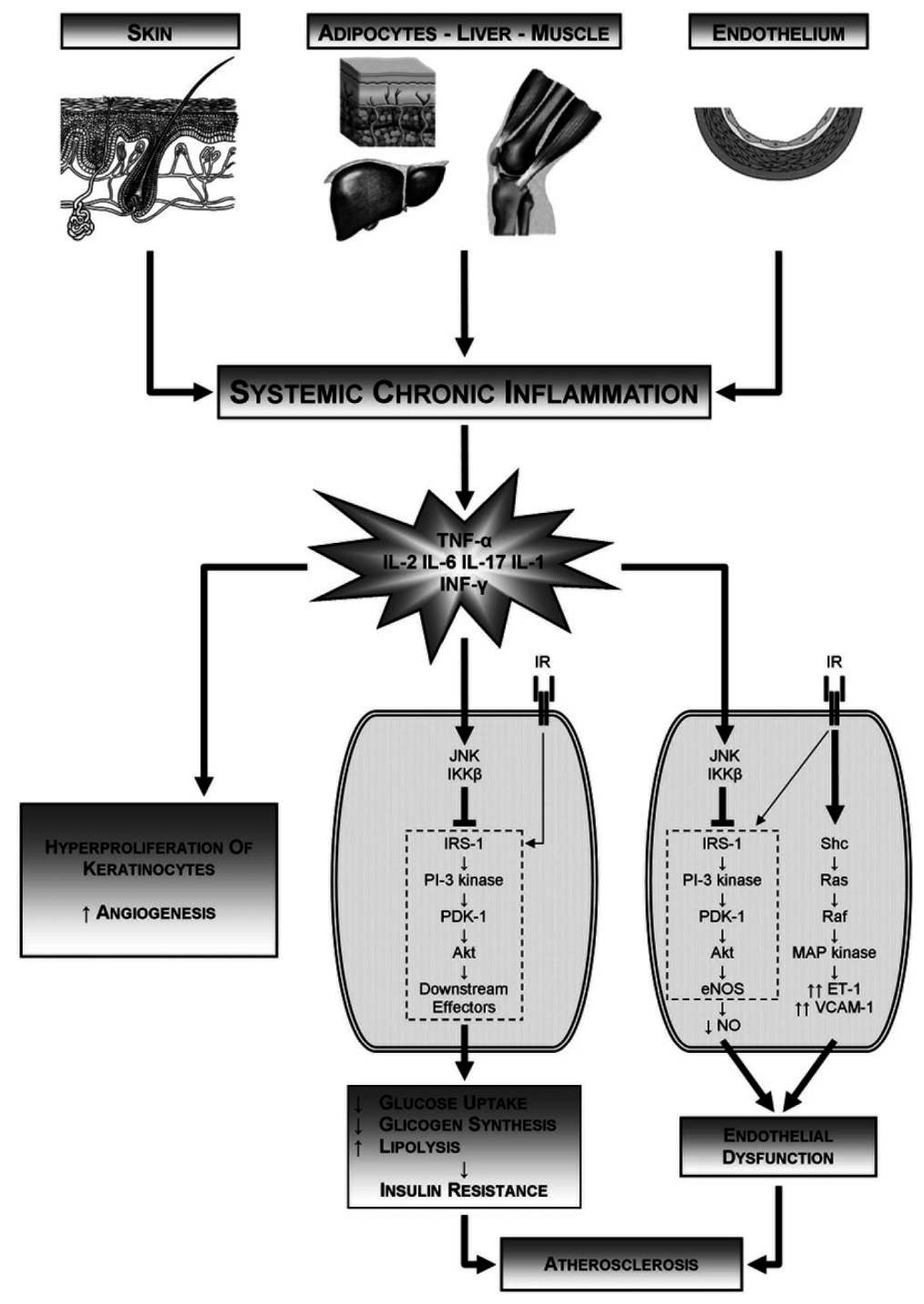 Psoriasis is characterized by a strong T helper 1 and T helper 17 polarization of the adoptive immune response, with subsequent increased expression of cytokines such as gamma-interferon, interleukin-2, tumor necrosis factor-alpha (TNF-α), and interleukin-17. These mediators play a key role in the development of psoriatic plaques, stimulating angiogenesis and keratinocyte proliferation, and promote metabolic abnormalities and endothelial dysfunction, both of which contribute to atherosclerotic plaque formation and progression.2

Another study by Osto et al.5 investigated the effects of psoriasis on coronary microvascular function, assessed by coronary flow reserve, in 56 young psoriatic patients without CV disease compared with 56 matched controls, showing that coronary flow reserve was significantly impaired in patients compared with controls (3.2 ± 0.9 vs. 3.7 ± 0.7; p = 0.02) and correlated with the severity and extent of psoriasis.

The impact of treatments on the relationship between systemic inflammatory diseases and CV events is still debated because commonly used drugs have divergent effects on the atherosclerotic process (Table 1).1 Pharmacological treatment of systemic inflammatory diseases involves analgesics and nonsteroidal anti-inflammatory drugs (NSAIDs) to reduce pain. Use of analgesics and their potential CV effects have been little investigated because of their predominantly symptomatic use, whereas the use of NSAIDs is more consolidated. Yet NSAIDs are currently less used as a first-line treatment because of their inability to control disease progression and several side effects, particularly gastrointestinal and cardiac.1 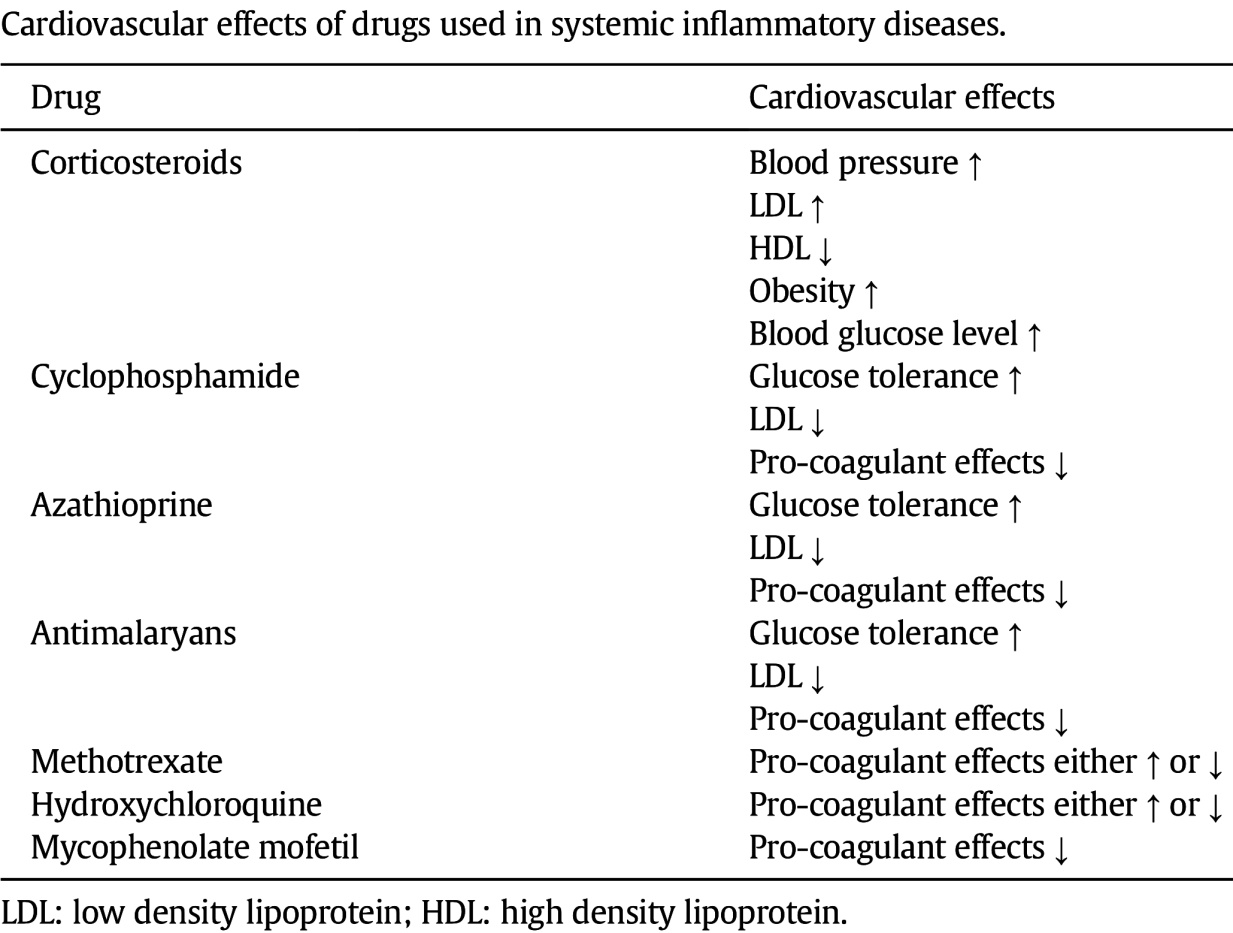 A prominent therapeutic role in the treatment of systemic inflammatory diseases is currently played by disease-modifying antirheumatic drugs, a heterogeneous group of molecules formally lumped in this family that represents the mainstay of systemic inflammatory disease treatment. Although their mechanism of action is not currently fully understood, these drugs are listed among immunosuppressants because they reduce the inflammatory process with favorable effects on symptoms and quality of life. This class of drugs includes methotrexate, azathioprine, cyclophosphamide, sulfasalazine, cyclosporine, and mycophenolate mofetil; chloroquine and hydroxychloroquine are antimalarial drugs also included in this group.1

Finally, biological agents are now widely used for treatment of patients with systemic inflammatory diseases, especially anti-TNF-α drugs conventionally associated with methotrexate. The effects of these drugs on CV diseases are complex, particularly because these molecules may promote the development of heart failure despite a favorable anti-inflammatory and antiatherosclerotic effect.1

YOU ARE HERE: Home > Latest in Cardiology > Atherosclerosis in Patients With Systemic Inflammatory Disease