Anticoagulation Strategies After Bioprosthetic Valve Replacement: What Should We Do?

Traditionally, the rationale for anticoagulation in the first few months after surgical valve replacement has been to mitigate against thrombotic complications, presumably related to suture material and a sewing ring that is not yet covered with biofilm and endothelialized.3,4 The possible subsequent thrombotic complications are three-fold: thromboembolic events, overt thrombosis of the valve, and subclinical organized thrombus that may impair long-term valve function. Despite the frequency of bioprosthetic valve replacement, data related to these complications are limited, in part because these events are seemingly infrequent.

A recent meta-analysis highlighted the low event rate after bioprosthetic valve replacement. In this analysis of 31,740 patients, predominantly with surgical aortic valve replacement, early thromboembolic events occurred in 145 patients (1%) taking vitamin K antagonists and 262 patients (1.5%) not taking vitamin K antagonists (odds ratio 0.96; 95% confidence interval, 0.60-1.52).5 If we hypothesize that there is in fact a 0.5% increase in thromboembolic complications in the first months after surgical aortic valve replacement in patients not taking vitamin K antagonists, then an appropriately powered randomized controlled trial would require approximately 15,500 patients.6 To date, 2 randomized trials have been performed, totaling 268 patients.7,8 Given the small number of patients, the lack of a statistically detectable difference in the 2 groups is not surprising.

In the absence of large randomized controlled trials, clinicians must turn to observational studies for insight, such as the analysis from the Danish National Patient Registry.9 In this study of 4,075 patients with bioprosthetic aortic valve replacements, discontinuation of warfarin was associated with increased thromboembolic events and cardiovascular deaths 1-6 months after surgery. Interestingly, although the stroke rate was increased in the first 3 months in the treatment group, the number of strokes between 3 and 6 months was no different between patients who continued or discontinued warfarin, though there were only 21 events during this period. In addition, there was no difference in bleeding events between 3 months and 1 year. This observation is counter to previous reports and clinical experience that patients on warfarin are more likely to be hospitalized for bleeding.5 Therefore, the authors' conclusions regarding cardiovascular mortality and thromboembolic events may have been related to residual confounding. Specifically, there may have been no difference in bleeding events because clinicians were less likely to start or continue anticoagulation in the highest-risk patients.

Based on an unclear magnitude of benefit and a well-accepted bleeding risk, universal anticoagulation after bioprosthetic aortic valve replacement is difficult to justify; this uncertainty is reflected by the Class IIb recommendation in the 2014 American College of Cardiology and American Heart Association (ACC/AHA) valvular heart disease guidelines.12 However, specific clinical situations may arise when anticoagulation should be more strongly considered. For example, in a recent case-control study including 46 patients with reoperation for bioprosthetic aortic valve thrombosis, an increase >50% in mean Doppler gradients on echocardiography from baseline, increased cusp thickness, and abnormal cusp mobility were all associated with valve thrombosis.13 Therefore, a trial of anticoagulation and follow-up echocardiography to assess Doppler gradients could be considered in these patients,14 although the extent to which short- and long-term valve function is modified by anticoagulation is unclear.

A 71-year-old woman presented with heart failure 8 months after bioprosthetic mitral valve replacement for rheumatic mitral stenosis. Postoperatively, she had been treated with coumadin for 3 months and continued on aspirin. She had no history of atrial fibrillation and had been afebrile, and blood cultures were negative.

Parasternal long-axis view is notable for biatrial enlargement, a dilated and dysfunctional right ventricular outflow tract, and a large echodensity of the atrial side of the bioprosthetic mitral valve. 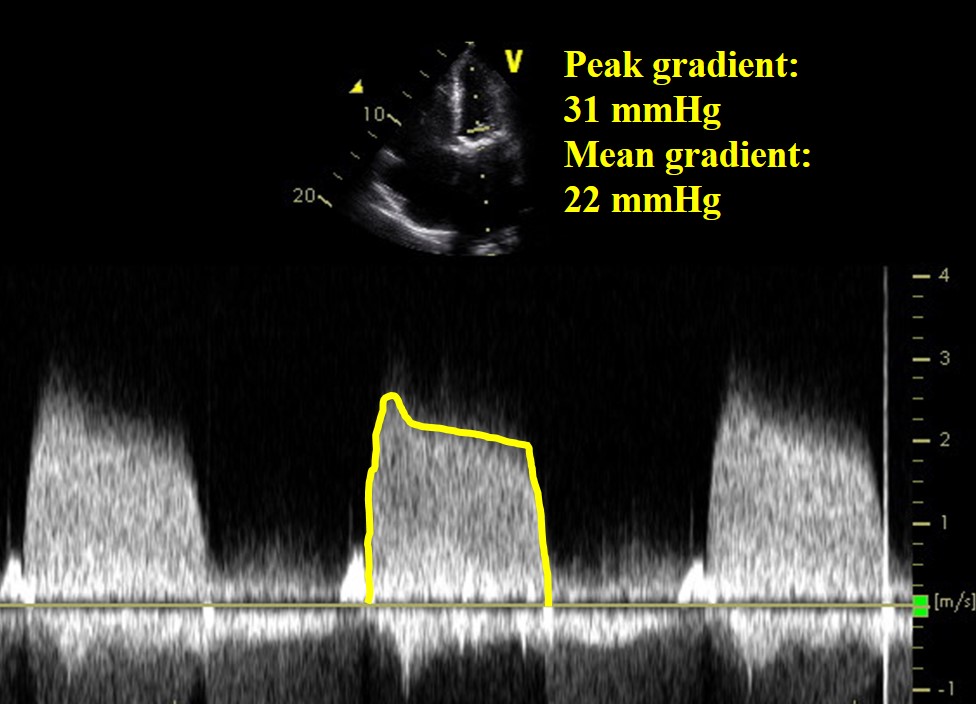 Three-dimensional transesophageal echocardiography of the mitral valve with the standard left atrial view shows a large echodensity of the atrial side of the bioprosthetic mitral valve, located medial and inferior. 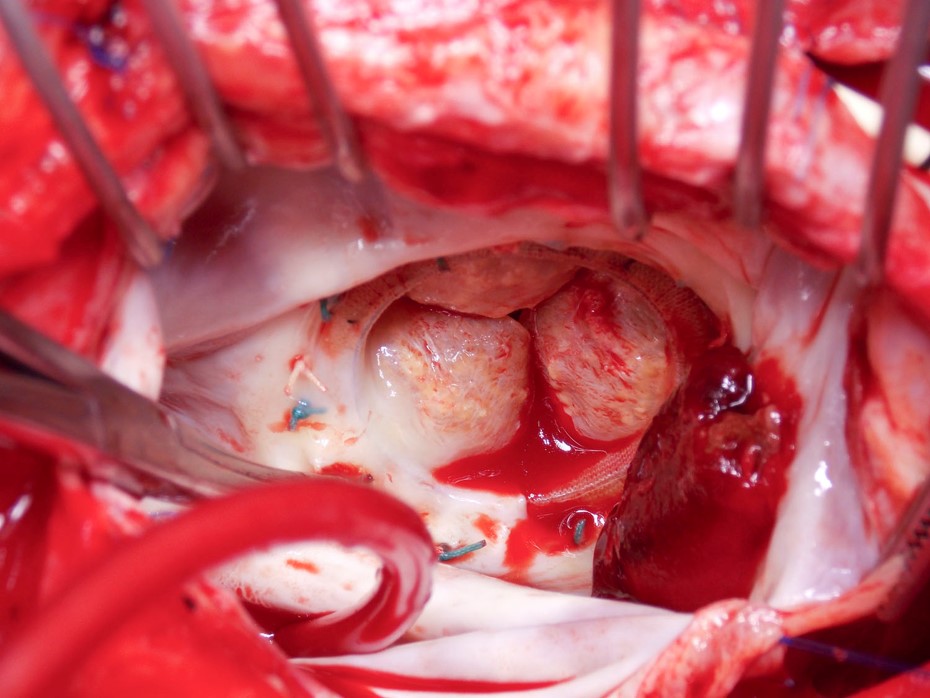 In situ findings at repeat surgery confirmed a thrombus.

Finally, and perhaps most contentious, is whether our approach to anticoagulation should differ for patients who have had TAVR. The initial default has been to treat these patients with aspirin and clopidogrel because this was the approach undertaken in the randomized trials. More recently, with electrocardiography-gated four-dimensional computed tomography angiography (CTA), reduced bioprosthetic aortic valve leaflet mobility and hypoattenuated leaflet thickening have been described, implicating valve thrombosis.17,18 Often, these patients are asymptomatic and have normal Doppler gradients on echocardiography, suggesting that these findings may be subclinical. Importantly, these CTA abnormalities may resolve with warfarin, and lack of initial anticoagulation is emerging as a possible risk factor.19 At present, however, these imaging findings are of unclear clinical significance.20 Fortunately, a randomized trial, GALILEO (Global Study Comparing a Rivaroxaban-Based Antithrombotic Strategy to an Antiplatelet-Based Strategy After Transcatheter Aortic Valve Replacement to Optimize Clinical Outcomes) comparing rivaroxaban to antiplatelet therapy after TAVR is underway and should provide valuable insight.21 Still, despite an estimated enrollment of 1,520 patients, the trial may not be adequately powered for clinical events. 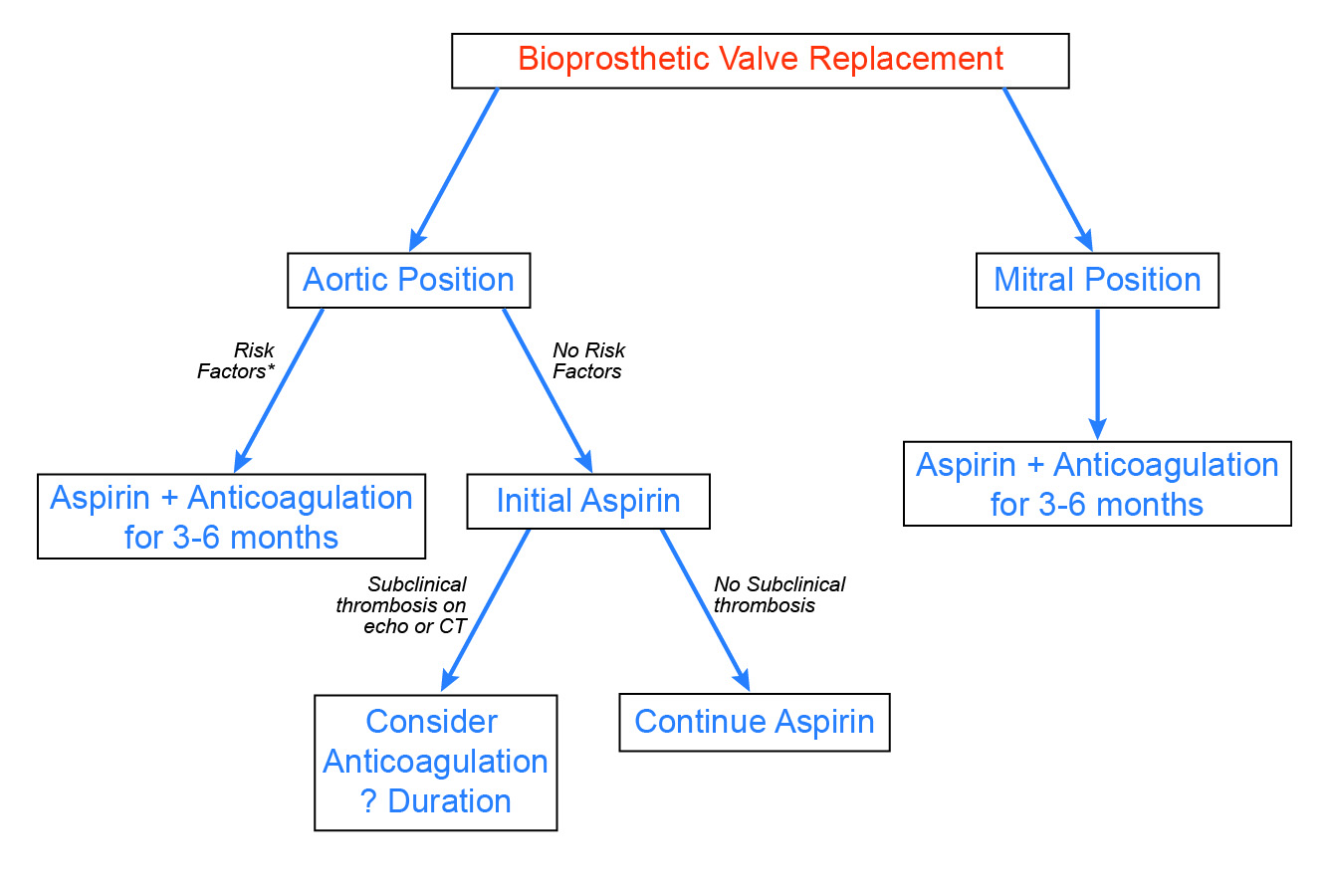 YOU ARE HERE: Home > Latest in Cardiology > Anticoagulation Strategies After Bioprosthetic Valve Replacement: What Should We Do?